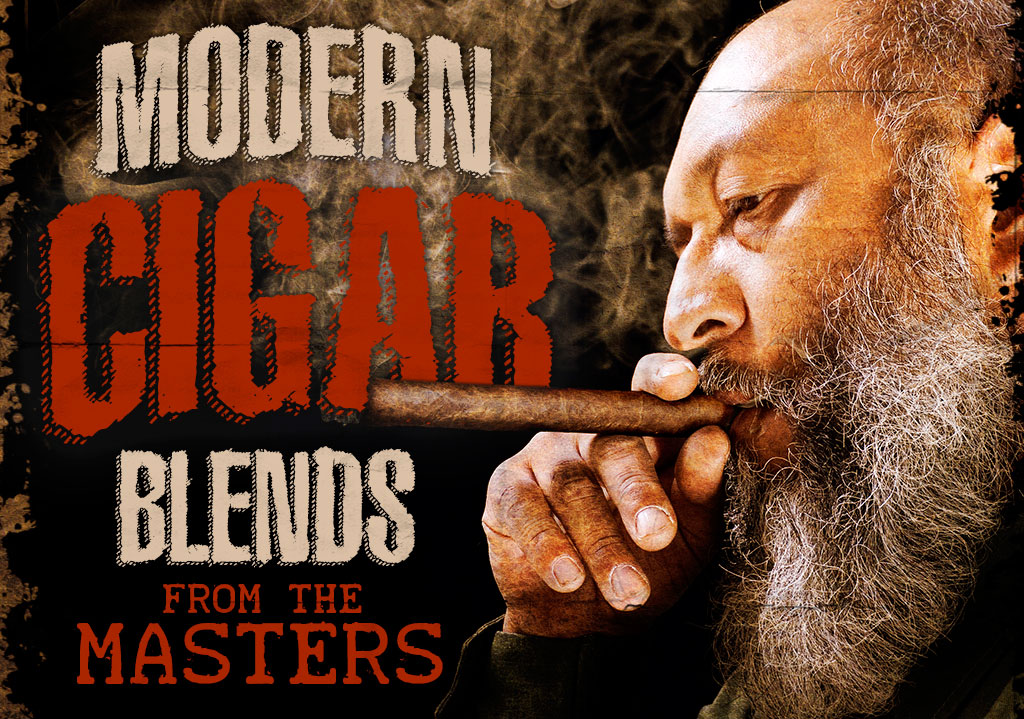 Nine Newer Cigar Blends, from the Masters You Know & Love

Master cigar blenders are a rare breed. I say that because it’s their unbridled passion for their craft that not only makes them successful and unique, but it’s what drives them day in and day out to create new blends of tobacco that will bring happiness to cigar smokers everywhere.

I have been incredibly fortunate to talk with and interview many a cigar master over the years and it is mesmerizing to watch them talk so affectionately about their livelihood. The fact is, cigar making is in their blood – it’s not a job to them, but a calling, almost a duty to their fellow man. Where they come from, the tobacco business is a sacred family tradition and they are befuddled at how their industry is demonized by the haters and the misinformed. And I use the term “misinformed” because I believe with total conviction that premium aged hand-rolled cigars are a completely different animal than chemically induced, paper wrapped cigarettes.

I have sat for hours at length with true masters like former General Cigar front man, Daniel Nunez, the late legend, Frank Llaneza and the great Benji Menendez, and I kid you not, I watched their eyes well-up as they spoke of cigar making as if they were talking about a son or a daughter.

A few years back I was blessed to have made a trek to the Villazon factory in Cofradia, Honduras, a once hallowed ground of cigar producing tradition. A unique opportunity presented itself as I was to interview factory manager and master blender, Manuel ZaVala, all through the use of an interpreter as the man didn’t speak a word of English. As the interview went on, Manuel became quite emotional as I could almost understand what he was saying, just by his facial expressions and body language. But it was when I asked him how he felt about the smoke Nazis of the world trying to eliminate his beloved industry, well, he just broke down in front of me and started bawling. Damn, people… I was crying, the interpreter was crying, and to this day I have never experienced anything like that in my professional life.

I started to think about the great number of cigar makers that have created the tried and true standby sticks that so many have enjoyed over the years. But a lot of these guys have new premium cigar blends on the market that you just might not be familiar with, and I thought that they were worthy of mentioning.

So, find below a short list of nine newer smokes that I have personally started to enjoy.

EP Carrillo La Historia – Sometimes you save the best for last, but I decided to start things off with my pick of the litter. Founder, Ernesto Perez Carrillo is known the cigar world over as the creator of the La Gloria Cubana brand. For the past few years he’s been creating under the EP Carrillo moniker and his newest sensation is the La Historia, voted the number 2 cigar of the year in 2014 and no one is arguing. With Nicaraguan, Dominican and Ecuadorian Sumatra inside and a shimmering San Andres leaf on the outside, this box-pressed gem has notes of dark chocolate, coffee and a little spicy black pepper. Just so damned tasty.

Joya Red – For years the Joya de Nicaragua brand has been known for its straight up, balls to the wall flavor and strength profiles such as the Antano 1970, which was once rumored to grow hair on a catchers mitt. But the brand new Red is Joya’s attempt to actually turn down the octane as they have succeeded to create a stick on the medium bodied side, but kept all of the great flavor. It’s a true Nicaraguan puro with a gorgeous Nicaraguan Habana wrapper that’s got a nice nutty flavor and a subtle hint of black pepper.

1994 by La Flor Dominicana – Lito Gomez’s sticks have always been known for their full bodied, full strength kick. The ’94 commemorates Lito’s 20th year with LFD, and this peppery powerhouse is quite a tribute. With aged Dominican long fillers and an oily San Andres natural wrapper, the flavor profile gives off notes of espresso and nuts. It’s a total taste bomb and if you like ‘em full-figured, then this is a definite smoke to try.

Montecristo Relentless – Of course you know the Montecristo brand, but you may not know their newest offering that is moving off the shelves by the name of Relentless. I have to think the name comes from its flavor profile, because while it sports a silky, golden Ecuadorian Connecticut wrapper, it is by no means a mild-mannered Monte. With its full-flavored Brazilian Mata Fina filler and San Andres binder, it’s a cedary, nutty smoke with just a touch of sweetness. This one is quite good, my friends and so worthy of your time.

Untamed by La Aurora – Well, my stogie loving peeps, this newbie from the good people at Miami Cigars is definitely making noise as it is officially deemed as the fullest and strongest La Aurora ever made. But I’m here to tell you that this incredibly dark and oily beast is not to be feared as its smooth complexity will have you full-bodied freaks clamoring for more. Notes of dark chocolate really come through as the Nicaraguan and Dominican filler tobaccos blend wonderfully with the Connecticut Broadleaf maduro wrapper. Trust me… so, so good.

Punch Rare Corojo – While the Punch name is an old, tried and true standby, the Rare Corojo is the new blood and has become an incredibly hot seller for the brand. This box-pressed, dark brick red stick is spicy and full-flavored, yet extremely smooth, well-balanced and aromatic. With Honduran and Nicaraguan filler and an Ecuadorian Sumatra wrapper, it has a natural sweetness and I could smoke this every damned day.

J Fuego Heat Corojo – Jesus Fuego has been growing great tobacco and blending delicious premium cigars for a lot of years, and now he’s created a standout that I personally love. This one is for you Corojo freaks – well, it’s actually for anyone who loves a smooth and full-flavored stick. The inside features Ecuadorian Sumatra & Nicaraguan Criollo long-filler while the outside has that wonderful Corojo wrapper. If you’re not familiar with J Fuego’s cigar blends, I say that the time to get chummy is right now.

601 La Bomba – Bang, bam, zoom… right in the kisser. Erik Espinosa at 601 has always been known for creating cigars with hearty profiles, but when you name your stick La Bomba, you’re warning the world that it’s not for the faint of heart. This explosive offering consists of all Nicaraguan tobacco, but it’s the wickedly flavorful ligero leaf that revs this cigar’s motor at higher rpm’s. It’s dark, it’s spicy, and it’s a terrific after dinner smoke when the palate and the belly are full.

Brick House – The good people at JC Newman have been making cigars for more than a century and I am always amazed at how they just keep creating cigar blends that we cigar smokers love. The Brick House isn’t so new, but their new tube packaging is – and inside you’ll find a solid medium bodied smoke that possesses some nice complexity and a whole lotta smooth flavor. The inside consists of Nicaraguan tobaccos and the wrapper features a gorgeous Brazilian Arapiraca leaf. With its consistent flavor and attractive price, it’s just a terrific every day smoke.

So there you have it, nine newer premium hand-rolled cigar blends created by people who take a ton of pride in blending outrageously good smokes. All I can say is to give ‘em a try and let me know what you think!

Most of these like Punch Rare Corojo have been around for a long time and are by no means new.

601 La Bomba is just like Crowned Heads Four Kicks. Overpowering, if you’re into that kind of thing.

Are seconds and bundle cigars worth aging?