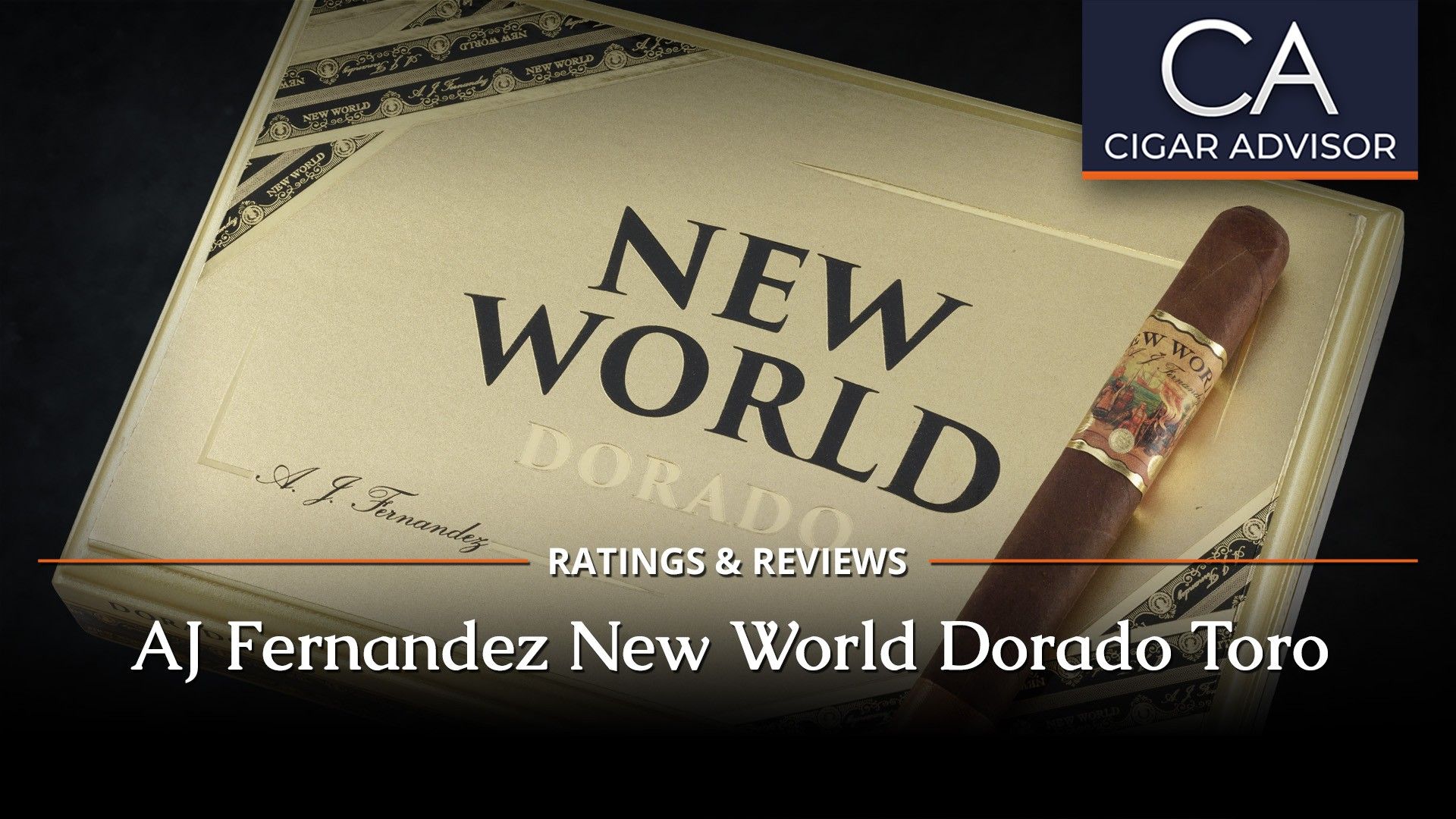 Leave it to AJ Fernandez to reinvent the Nicaraguan puro. Ever since he began growing tobacco and blending cigars—along with a little mentoring from his Dad, Ismael—AJ’s had a way of coming up with gold. Now, with the introduction of his four vitola New World Dorado cigar selection, he’s come up with it again, and almost literally. Even the packaging sheds a golden light upon the prospective smoker.

The New World Dorado line gets its name from the farm on which the bulk of the tobaccos used in the blend were grown. Fernandez named the Estelí farm “Dorado” (Spanish for “golden”) because he noticed a golden hue that appears to rise off the surface of the soil. That seemed to provide the additional inspiration to create a line of cigars made with tobaccos grown almost entirely on the Dorado farm. 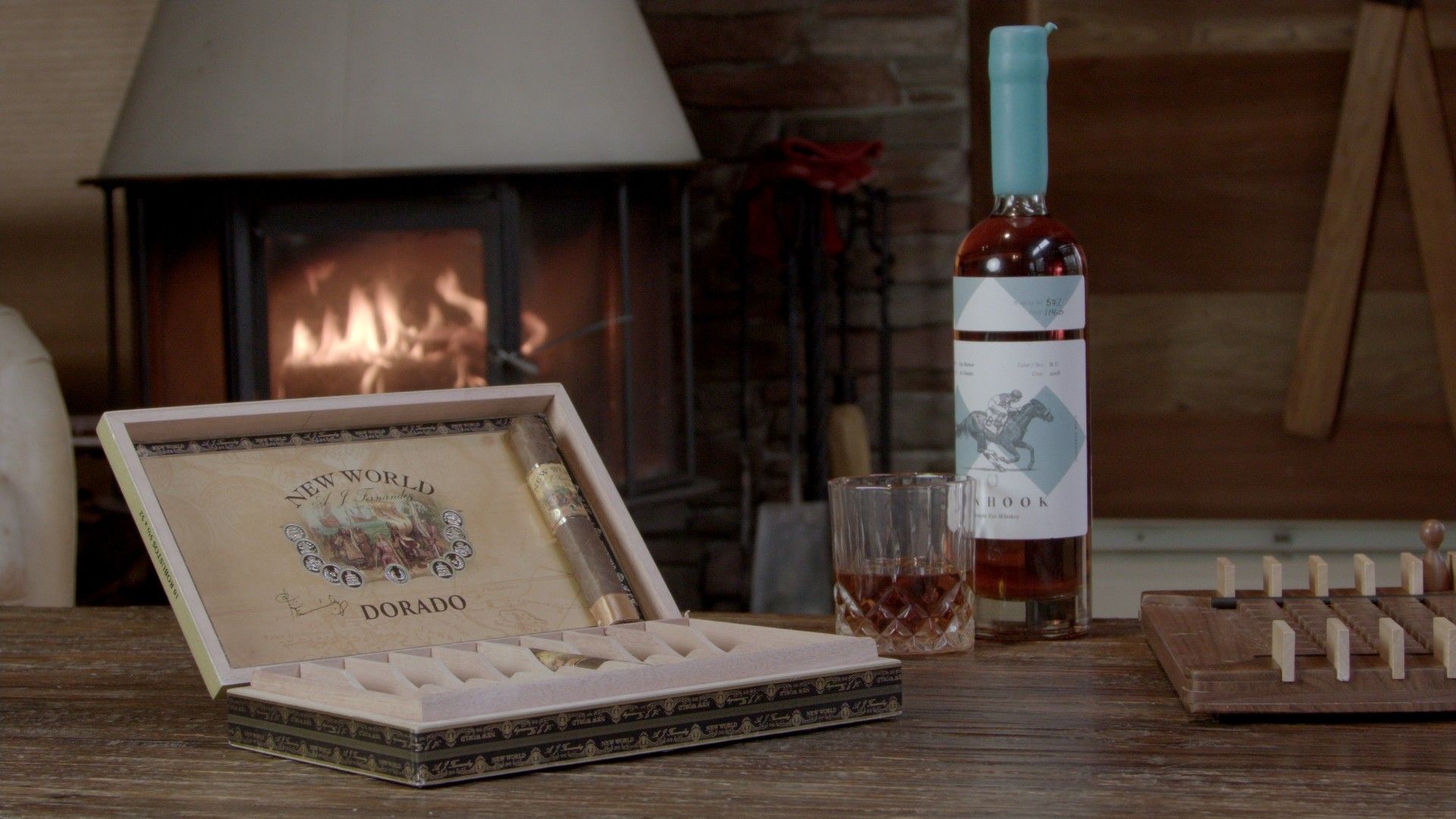 At about five years old, the Dorado farm is one of AJ’s more recent investments. The other element that ties the brand to the farm is the tobacco itself. The Dorado farm-grown leaf used in the New World Dorado selection is also from the farm’s first cosecha, or harvest.

Rolled at AJ’s San Lotano tabacalera in Ocotál, Nicaragua, the blend starts with a Sun Grown Habano wrapper from the Dorado farm. The leaf is about as pristine as it gets with a dark even color like that of well-tanned leather. It’s pretty thick and pliable, too. The binder is a Criollo ’98 also grown on the Dorado farm. The filler portion of the blend is mostly Dorado with some additional leaf from Condega and one of AJ’s other Estelí plantations. 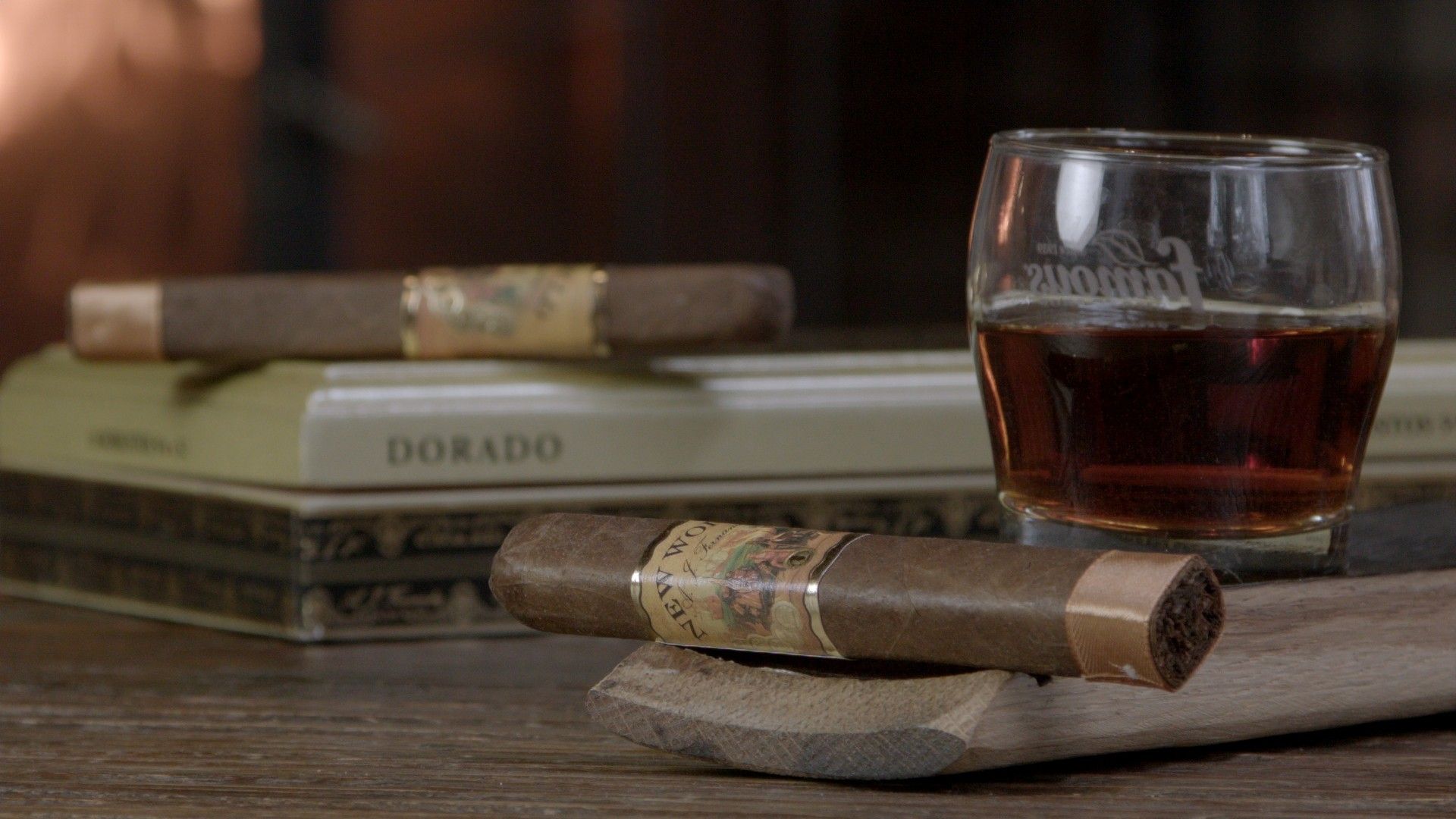 The New World Dorado selection is rolled and subsequently box-pressed in four sizes: a 5½” x 52 Robusto, a 6” x 54 Toro, a 5½” x 60 Gordito, and a 6” x 56 double tapered Figurado. As is more often the case than not these days, each vitola is presented in boxes of 10 cigars.

Construction: Nice square press. Wrapper is a natural suede color, with lots n’ lots of tooth. There was some real care taken in making these.
Draw: Good airflow (a box press tends to give a more open draw) – rich smoke production.|
Pre-light flavor: Cool – it’s herbal, with a hint of green apple sweet-tartness plus wood and graham cracker. The smell is sweet and heavy on fermented tobacco, borderline barnyard.
Toasting & Light: Warm and very toasty with baking spices, and a little caramelized taste. Forward with spice over a layer of charred wood.
Base flavors: Charred wood, pepper, baking spice and cinnamon, graham cracker, earth.
Retrohale: Sensation of raw wood and pepper.
Aroma: Refined, this has a very nice room note.
Burn & Ash Quality: Straight burn with a neatly stacked ash.

Summary: The Dorado is a standout right from go: the smoke is chewy and fluffy with a tinge of sweetness, almost savory but for the earthy character in there. There’s also a charred wood sensation that’s most obvious on the finish, and it has the tendency to dry the palate out a bit. Impressive, for sure.

By the next transition, AJ’s blend adds mild citrus, cinnamon, and a little leather. The Dorado still has that long and woody finish, but it’s more peppery at halfway. By the last third or so, most of the creamy and savory sensations have fallen off, leaving the charred wood and pepper…let’s call it Esteli-forward, and true to the typical “AJ cigar” profile. For whatever cover he may have given himself for the first 2/3 of the cigar, it’s this last part where AJF pops out and says, “IT WAS ME ALL ALONG.” 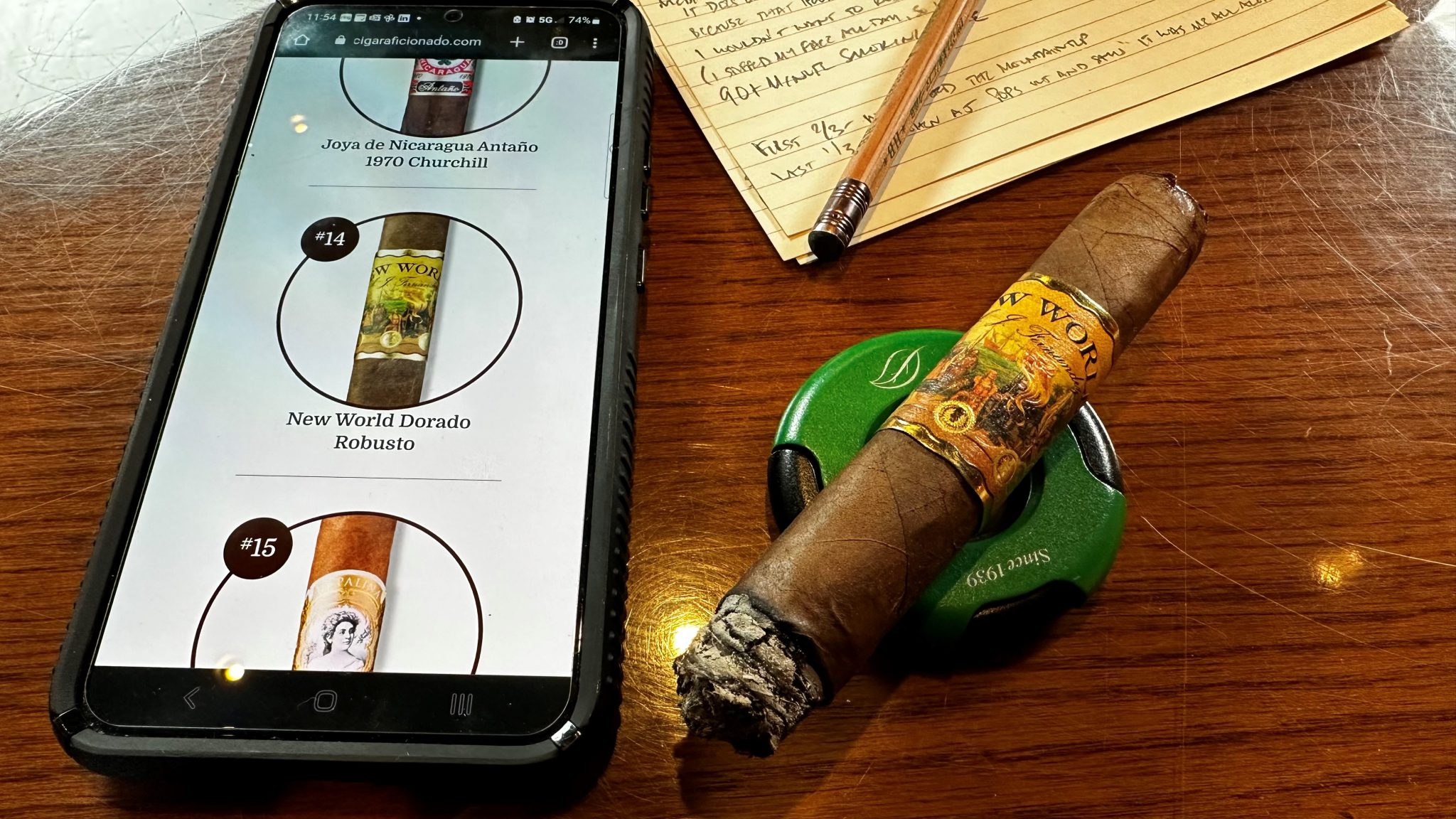 Some have pegged this cigar as nearly- to very full. I thought it was more medium, just as Fernandez promised, although it does get somewhat substantive (which Fernandez almost always guarantees)…so good thing it’s a slow burner. This New World Dorado Robusto had a 90+ minute smoke time, but I wouldn’t want to rush it anyway as it helped keep body, flavor and strength in balance.

Looking back at my notes and reading over the list of ingredients I rattled off, I realized the New World Dorado is apple pie minus the sweet center: the graham cracker, cinnamon, baking spice,  the dry sweetness. Selected as the #14 cigar of this past year, I’ll admit it peaks early; although I’d agree with you if you said the Dorado is the high point of the New World collection. But if you’re any fan of AJ’s blending from his early days, you’ll love this cigar unconditionally right down to the ragged, finger-burning nub.

Construction: Some slight tooth and a bit rustic looking in its pressed roll. Golden brown in color.
Draw: Excellent.
Pre-light flavor: Potently spicy on the lips with a bit of dark fruit.
Toasting & Light: Earth, earth, and a little earth on the side. Did I mention earth?
Base flavors: Earth, graham cracker (or Cinnamon Toast Crunch), spices, black pepper, and wood with a balancing dab of salt. Overall: savory.
Retrohale: AJ-level strong. Especially later on.
Aroma: Sweet, spicy.
Burn & Ash Quality: Excellent.

Summary: Like New World Cameroon, Dorado is notably more nuanced than the rest of the New World lineup. AJ Fernandez’ latest blend, Dorado, is well worth peeling back the layers, revealing a more-than-competent entry into an already popular series.

The first section is very earthy. I thought for a minute that Dorado was going to be a study level benchmark for the flavor, but it evolves within a few minutes to become quite complex. There’s an initial wave of pepper and wood, with a sweetness that grows into something like graham cracker. Maybe even Cinnamon Toast Crunch if it weren’t as sweet. Didn’t even want to write it down but flavors this specific happen—just much more rarely than some reviewers would have you believe. 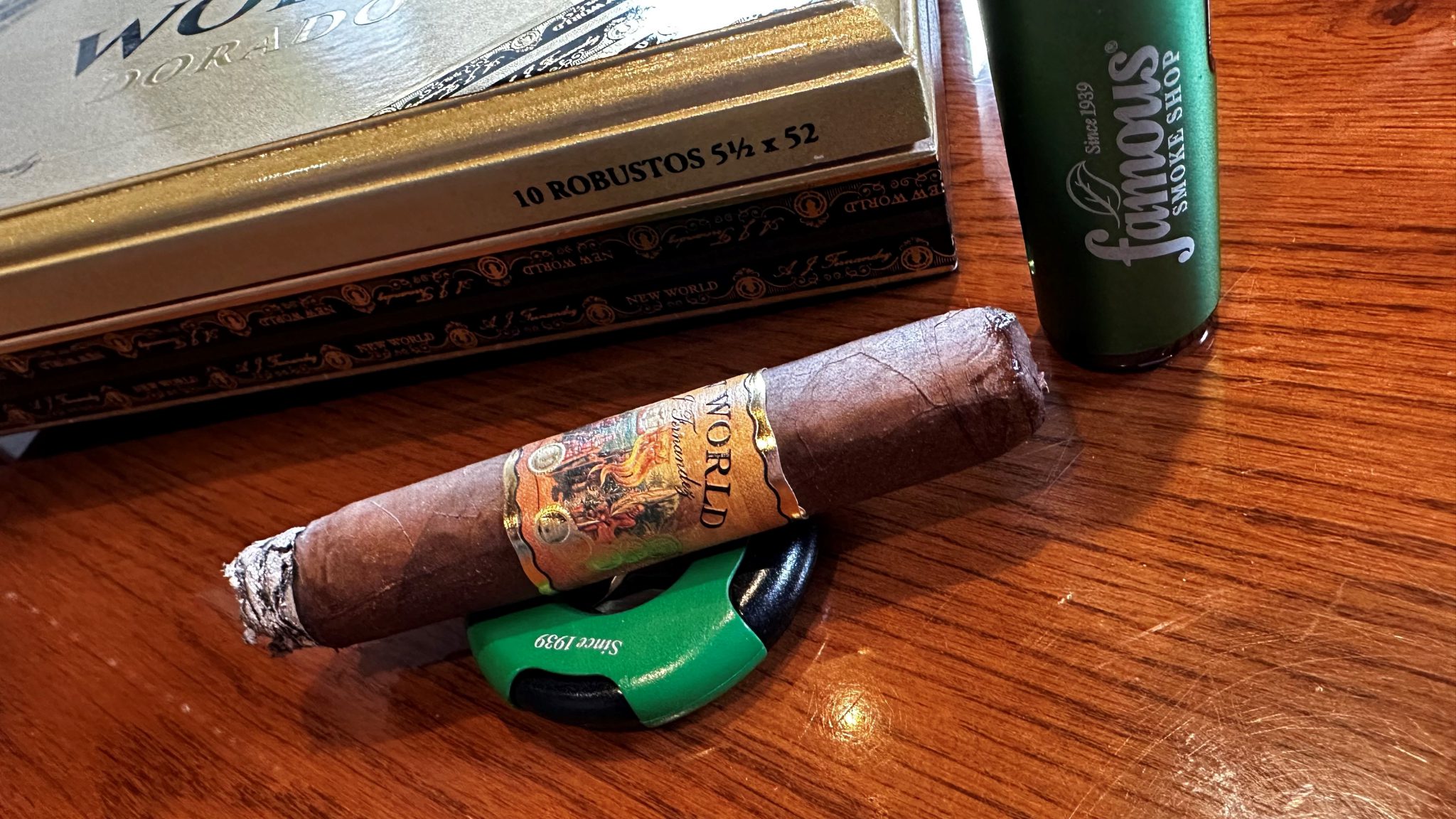 Later on in the middle and last third sections, Dorado adds a layer of sweet wood and salt to complement the existing flavors perfectly. Like when you dip French fries into a vanilla shake. Yeah, I’m fat. But I’m also right. It’s delicious. Don’t knock it ‘til you try it. Even some coffee darts in and out of the profile for a little more texture.

Overall, I’d call the cigar savory. It has its peaks and valleys here and there, but nothing I’d call out as either extraordinary or underwhelming. It’s just good. And good is enough…at least for me. Try it and let me know what you think!

Summary: When I heard we were reviewing AJ Fernandez New World Dorado, a Neil Young song started playing on repeat in my noggin. Cortez the Killer in case you were wondering. For those unfamiliar, it’s about the Spanish coming to the New World in search of El Dorado—the fabled city of gold. And so, to kill two birds I put Live Rust on the old music box (to rid myself of the earworm) while I sat down to see what the New World Dorado had to offer.

The opening few notes were textbook AJ—meaning I had to fasten my seatbelt because I was in for a hell of a ride. Black pepper led the charge, followed by cabinet spices like cinnamon and a pinch of nutmeg. Not to be outdone, brown sugar arrived adding some needed sweetness to the pot. So far, New World Dorado was off and running with a profile that was both balanced and rich. 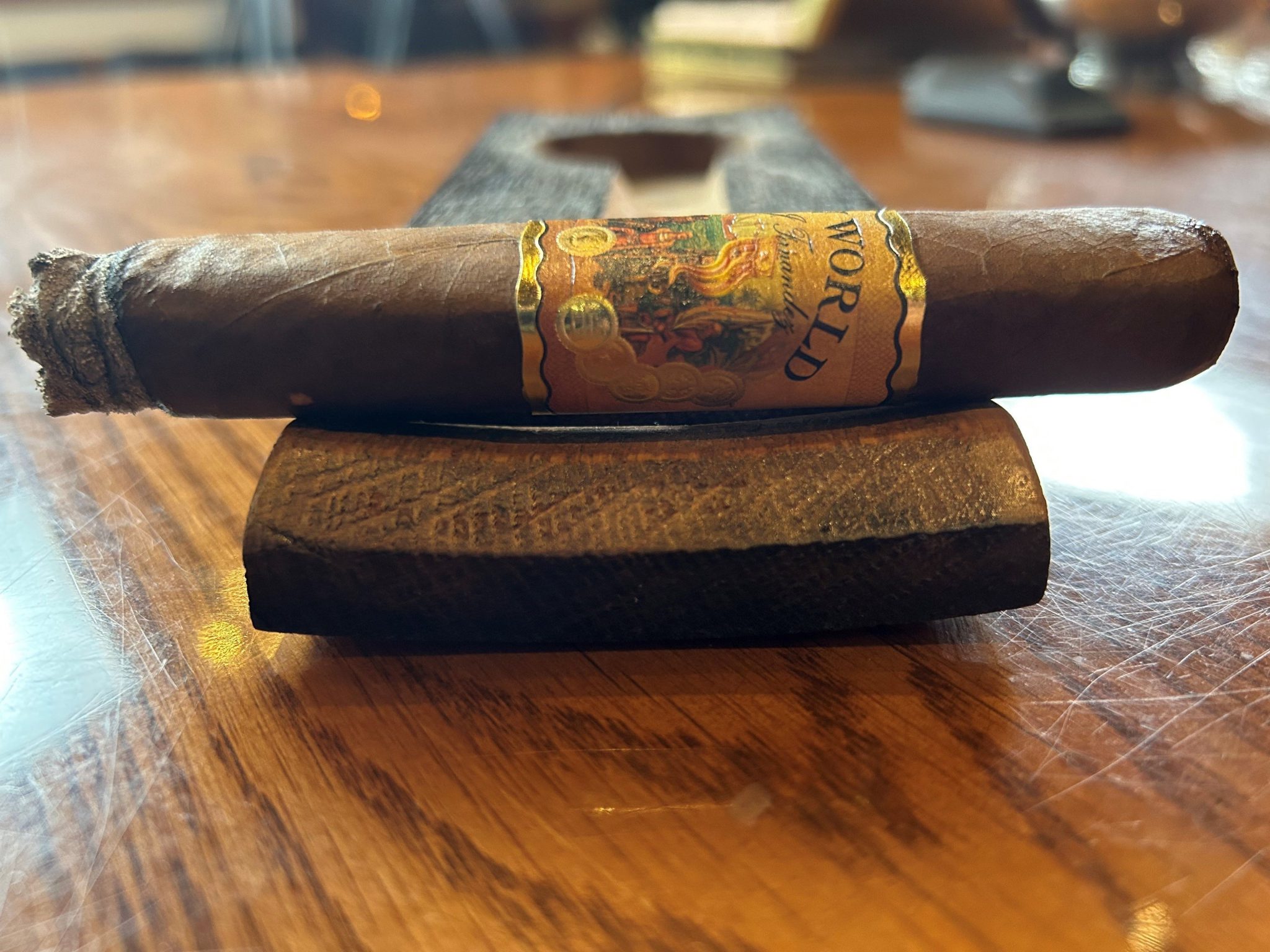 While fuller-bodied, strength hasn’t been knee-buckling and there was no sign of impending nicotine sweats. A savory component is hiding in plain sight and teasing me from the start. I couldn’t put my finger on it until we filmed the video. It’s savory like charred meat, but more specifically brown sugar rubbed pork shoulder—the kind with the yummy bark.

As mentioned in the video, this New World Dorado rated among the top 20 cigars of the year (#14) by a certain cigar magazine—and I’ll give them their flowers here (well, a couple dandelions really), I think they got it right. I’d put it this way– New World Dorado is a must try for fans of the signature ‘AJ profile’ and those enthusiasts whose preferences trend towards full-bodied Nicaraguan cigars.

Will be placed on the to try list for this year.

Spot on review fellas. Jared you hit the nail on the head, Cinammon toast crunch.

Reading Time: 7 minutes Puros Huérfanos is a new incarnation of a previously released Willy Herrera blend. What makes this particular review unique is that each review panelist smoked a different size. Find out if the difference between all three shapes was remarkably close or worlds apart.