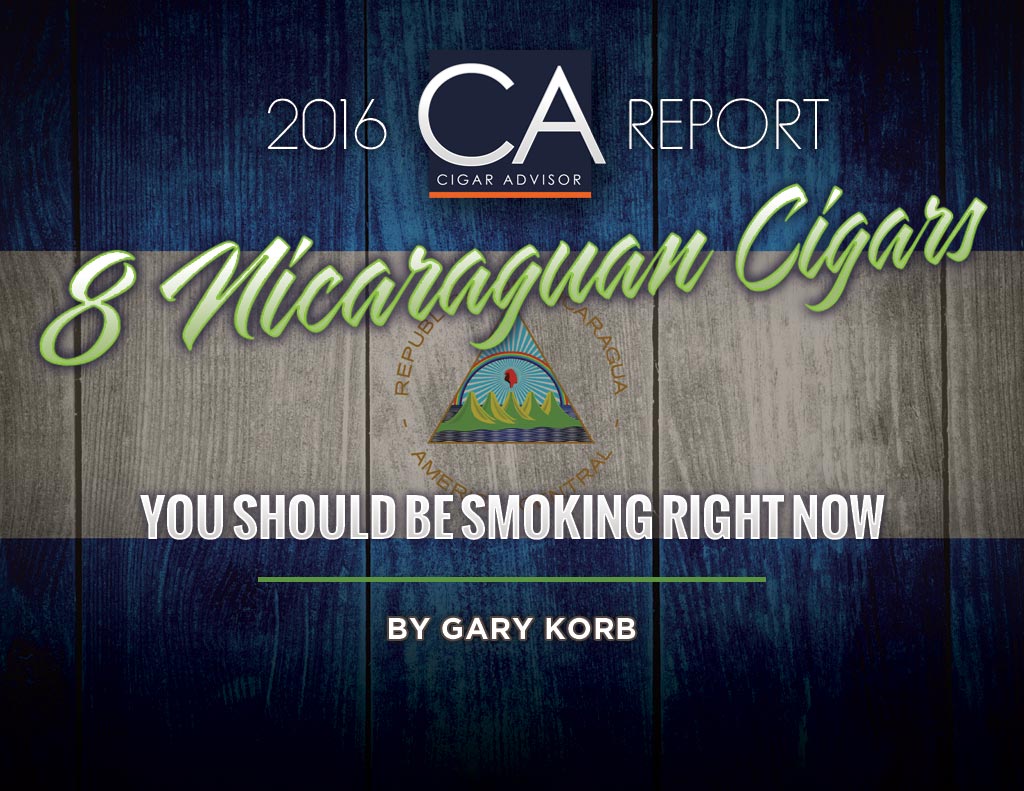 CA Report 2016: 8 Nicaraguan Cigars You Should Be Smoking Right Now

Eight Nicaraguan Cigars You Should Be Smoking Right Now

The proliferation of good Nicaraguan cigars seems to have reached the point where I’m almost tempted to agree with some who say, “Nicaragua is the new Cuba.” Add-in the new cigars from Estelí that have reached cigar retail stores since the IPCPR trade show this past July, and choosing the right cigar for you can be a real headscratcher. On top of that, it seems like just about every cigar manufacturer not already in Nicaragua wants to make a Nicaraguan blended cigar. To help put some of this in perspective, I took a closer look at eight cigars that I found to be exceptional on all counts. Among them are the latest arrivals from Nicaragua, while others were released within the last year, or more. So, take out your “Must Smoke” list, turn over a new page, and let’s go. . .

Tom Lazuka and Christian Eiroa have enjoyed enormous success in the boutique cigars category since they launched Asylum Cigars – and some of their cigars are pretty enormous, too. Asylum Lobotomy, the first cousin to the Asylum Premium cigars line, also boasts an all-Nicaraguan-tobacco blend donned in a dark, oily Nicaraguan Habano maduro wrapper. Medium-bodied and full-flavored, the Toro starts with a light, peppery wake-up shot (to make sure your brain is actually still functioning), then rounds-out to an impressively well-balanced and complex operation offering flavors of coffee, toasted nuts, sweet spice, cedar, and cocoa. Prognosis: Excellent. What I also like about the Asylum Lobotomy Toro is that for about $4 you really get your money’s worth. A must for Asylum devotees as well as fans of Nicaraguan cigars looking for a very satisfying value. Try pairing it with a good dark Nicaraguan rum.

Released earlier this year, Oliva Baptiste cigars are another affordably-priced selection from Oliva Cigars in Estelí. One of the first things that strikes you about the Toro isn’t its flawless, milk-chocolatey-hued Ecuadorian Habano wrapper, but the oval-shaped pressing that feels good in the hand and offers an equally comfortable mouthfeel. Like many of Oliva’s best cigars, the core blend is a mix of perfectly-aged Nicaraguan long-fillers from different regions, and once lit, the smoke is nothing less than sublime. Earthy-spicy flavors form the base, as notes of cedar, sweet tobacco, black coffee and a citrusy note ensue in this full-bodied cigar that keeps its cool right down to the nub. If you like your cigars with coffee, the Baptiste goes well with it in practically every variety.

I remember when the Murciélago brand debuted in 2009, which, at the time were part of Erik Espinosa’s former E/O Brands stable. These Nicaraguan cigars were produced at the My Father Cigars factory in an all box-pressed line and featured very dark, oily Mexican San Andrés maduro wrappers. The name was almost impossible to pronounce, and I remember them being very peppery, which didn’t sit well with my palate.

Fast forward to this rebooted Murciélago from Mr. Espinosa, which is now made at his La Zona factory in Estelí. Using virtually the same blend of Nicaraguan long-fillers and San Andrés maduro wrappers, this cigar did a total 180 on me. The smoke is full-bodied, ultra-smooth and well-balanced with earthy, sweet, and spicy base flavors accompanied by notes of espresso, dark chocolate, and black cherries. As for its overall flavor profile, if I didn’t know better, I’d say that it was somewhere between a mainline Padrón and a 1964 Aniversario. The Murciélago La Lune also just received an “Outstanding” 90 rating in the December 2016 issue of Cigar Aficionado. I usually take their reviews with a grain of salt, but they got this one right. If you like full-bodied cigars that are a little on the sweet side, yet complex, the Murciélago La Lune will do right by you. Great with espresso, try pairing it with a long-aged dark rum, single malt scotch, or Bourbon.

When my co-workers returned from this year’s IPCPR show, one of them handed me a baggie with the Crux Cigars logo on it. (“Mmmm…samples!”) It seems this premium line from Jeff Haugen and Joel Rogers, co-owners of Tobacco Grove in Maple Grove, MN, are made at Nestor Plasencia’s factory in Estelí. Well, that was enough for me to dig in, and one of the more impressive cigars in the pack was the Crux Classic Corona Gorda. For Crux Classic, Nestor uses an all-Nicaraguan long-filler and binder core deftly rolled in a shimmering Habano wrapper from Jalapa. Like many Nicaraguan cigars, the smoke starts with an earthy-spicy and slightly peppery profile. As it works its way to medium-bodied depth, notes of cedar and charred oak enter the fray, while some pepper lingers on the finish. You may also pick up a little natural sweetness from the wrapper. Not a complex cigar, but all-in-all a solid, satisfying puro that would pair nicely with a fine bourbon or single malt.

I’ve been a fan of Don Tomás cigars pretty much ever since I began smoking cigars. It’s one of the reasons I developed a fondness for Honduran tobacco and other Honduran cigars. So, when I saw that the company had announced the release of Don Tomás Nicaragua cigars, I figured, even without the Honduran tobaccos, all things being equal, the cigars had to be pretty good; and after smoking the Robusto, I was not disappointed. The blender for this selection is Augustin Garcia, who put together an impressive medium-full helping of fillers from Condega Pueblo and Estelí plus Dominican Piloto Cubano, a Brazilian Arapiraca binder, and a shade-grown Jalapa wrapper. Flavors of earth, spice, nuts, and wood prevail, balanced by sweet tobacco notes from the binder and wrapper. Also impressive is the affordable price. If you’re looking for a good “everyday” Nicaraguan cigar, the Don Tomás Nicaragua Robusto covers all the bases. I suggest smoking it after dinner paired with a fine Port.

When Joya de Nicaragua Cigars released the Joya Red cigars some years ago, I took to it instantly; well-rounded, medium in body, delicately sweet – all the things I love in a good cigar. Now they’ve got my attention again with the Joya de Nicaragua Black. One of the reasons is, this is the first JDN to feature a Mexican San Andres Negro wrapper – another favorite tobacco of mine. I chose the Joya de Nicaragua Black Nocturno for its Corona Gorda-sized dimensions. The 46-ring provides more of the sweeter qualities in the wrapper, and the all-Nicaraguan core is pretty much the same as the Red as far as strength, body and flavor. The smoke is exceptionally creamy with notes of leather, coffee bean, nutmeg, sweet wood, and nougat. N00bs who are looking for a medium-bodied maduro cigar may want to start here, as well as cigar smokers who want a solid Nicaraguan smoke with a little less potency and pepper. Try pairing it with a long-aged dark rum, or even a fine añejo sipping Tequila.

One of the tobacco aging secrets Nick Perdomo learned from his late father, Nicholas Sr., was barrel-aging. Enter the Perdomo Double Aged Vintage selection. Actually, Perdomo barrel-ages a lot of their tobacco, but this full-bodied line boasts a blend of Perdomo’s most precious 12-year-old fillers, binders, and wrappers via a proprietary, double-aging process. After the tobaccos are bale-aged for 10 years, they’re aged an additional two years in charred, white oak bourbon barrels. I chose the 5-inch by 56-ring Sun Grown Robusto not only for its distinctive taste, but I’ve found these dimensions to be excellent in several other cigars I smoke on a regular basis. The smoke is earthy and well-rounded with caramelized flavors of sweet spice, oak, toasted almonds and a note of coffee bean. It also pairs well with a number of libations including single malt scotches, blended whiskies, bourbon, rum, cognac, port, craft beers, and coffee.

Few cigar manufacturers are as prolific as Rocky Patel, and his Sun Grown Maduro, which debuted earlier this year, is mighty impressive in both its stunning construction and flavor. Made in his Tavicusa factory in Estelí, for this blend, Rocky uses a core of hearty Nicaraguan long-fillers, a double binder, and a lusciously oily Connecticut Broadleaf maduro wrapper. I sampled the Robusto and found it to be a well-balanced, full-bodied smoke rife with a crisp, earthy-spicy base and a long peppery finish. Compared to the original Rocky Patel Sun Grown cigars selection, the Maduro is worlds apart, and definitely not for n00bs. If you love deep, dark tobacco flavor with a very peppery character, you’re going to take to this cigar quickly. Try pairing it with a long-aged dark rum or single malt scotch, too.

Please let me know if you’ve tried any of these Nicaraguan cigars, and what you thought, or if you have some other suggestions that I may have overlooked by leaving a comment.

Thanks for this review. I LOVE Nicaraguan cigars, particularly Nicaraguan puros. I’l definitely add these to my list of “cigars to Try”.

In my opinion the JDN black far surpasses the red.
I enjoyed the write up and have tried the Murcielago, but not the others. Crux was not even on my radar.
Now I have some more Nicaraguans to try.
Thanks!

Another great list! Love the reviews of new sticks. Some I can find and some will remain a mystery. But I always look forward to these reviews! Smoke on!