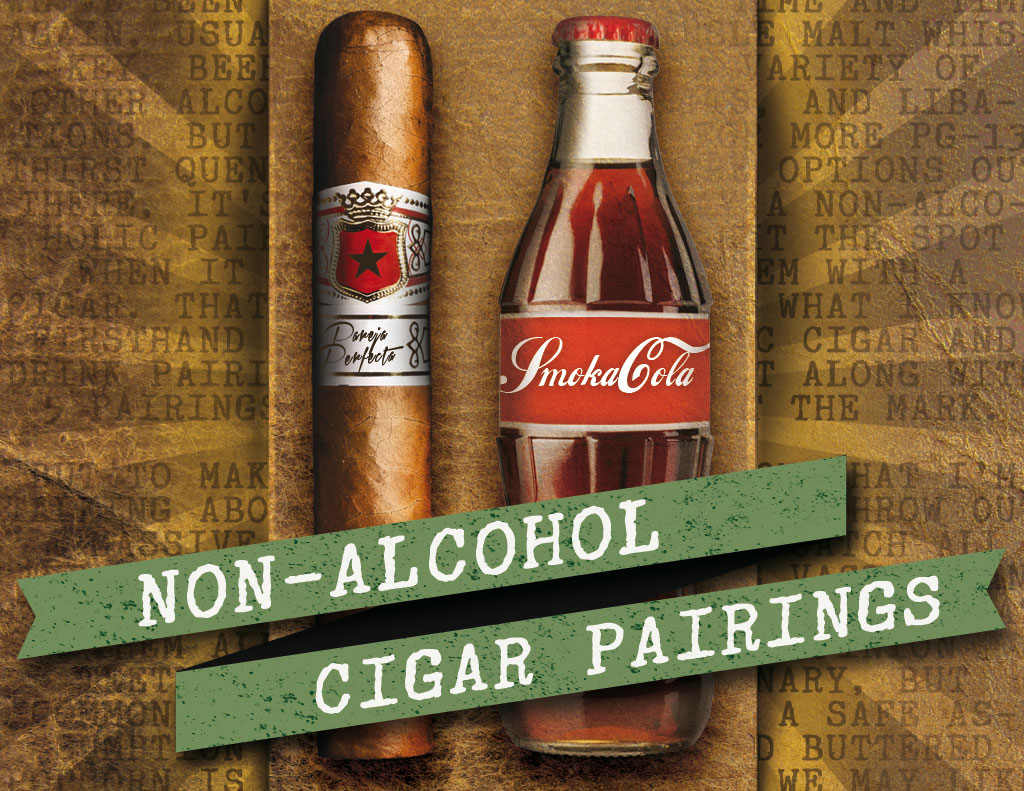 We’ve been over pairing lists time and time again. Usually we mention single malt whiskey, beer, cocktails, and a variety of other alcoholic brews, spirits, and libations. But where’s the love for more PG-13 thirst quenchers?  With all the options out there, it’s pretty safe to say a non-alcoholic pairing can certainly hit the spot when it comes to matching them with a cigar. That’s why I’ve compiled what I know firsthand to be 5 non-alcoholic cigar and drink pairings that hit the spot along with 5 pairings that just don’t hit the mark.

But to make it sound like I know what I’m talking about, I thought I should throw out a massive “Perspective Net” to catch all the Jonisright Fish within this vast ocean before predatory Naysayer Sharks try to eat them all up with their damn “Opinion Teeth”: Pairing is discretionary, but common sense is required. It’s a safe assumption that Caesar Salad and buttered popcorn is a bad pairing. Sure, we may like them both, but together the combination will only give you a one way ticket down hurl highway. When you’re pairing food or cigars with a drink, the goal is to amplify existing flavors and/or bring out hidden flavors in the main attraction while also thoroughly enjoying the drink as well.

This is an obvious one. It just makes sense this is on the list of proper cigar pairings, considering java is a major factor on the stogie flavor chart. A Cup O’ Joe can be customized to suit all sorts of palates to match with almost every kind of cigar. From a wide variety of bean choices, brewing and roasting methods, and even with different additives such as sugars and creams, customization is easy. Mild cigars pair perfectly with milder coffees, while bolder java jives well with more intense cigars. Add cream to your mojo to intensify creamier stogies, and add sugar if you’re smoking sweeter cigars. The possibilities are endless, making coffee an absolutely perfect pairing in the cigar world.

I’ve said this time and time again: One of my favorite pairings is warm spiked cider and an Aging Room Maduro. The bite of the bourbon, sweetness of the cider, and flavors of the cigar is a match made in heaven. Take out the bourbon, and it’s a train wreck with any cigar. The acidic sweetness of apple cider alone is so intense that it distracts the palate away from the flavor of your cigar. This makes your overall smoking experience seem more about satisfying a sweet tooth rather than marrying the flavors of your cigar with your drink. If you’re going to go with cider, make sure it has a bite to it to cut the sweetness or water it down. Otherwise, just steer clear of this palate pulverizer.

You’d think a drink this sweet would detract from your cigar’s flavor, but sipping a Dr. Pepper complements stogies rather well and is a fan favorite. Consider this: Dr. Pepper is made with a mix of 23 flavors while the cigar flavor wheel lists over 50 unique flavors from 8 separate categories. It just makes sense that a lot of these flavors overlap, such as cherry, honey, and caramel, among others. What you get with this pairing is an emergence of additional flavors coming from your cigar, thus making your smoke more complex. It’s a tried and true combo that stogie heads swear by.

The soda you shouldn’t drink with a cigar is Mountain Dew. Besides the rumor that this chemical laden treat glows in the dark, Mountain Dew really adds no benefit to smoking a cigar other than additional sweetness. Drinks like Ginger Ale, Cola, and Root Beer at least help bring out additional flavors common in cigars. “The Dew” most certainly does not. Leave it for the gamers, and pick up a more traditional soda. I mean, honestly- what flavor is “Code Red” anyway? Bullshit. That’s what.

Surprised? I thought you would be. Black tea, especially an English, Irish, or Russian breakfast blend is a fantastic pairing for bolder smokes in your repertoire, while lighter green or even milder Oolong teas pair well with milder smokes. What I’ve found is black tea brings out a lot of the richer earthy and chocolate flavors, while lighter teas bring out floral and sweet notes in lighter cigars. For added enjoyment, pick up a black tea with a dash of hazelnut in the blend to help bring out more nutty and woody flavors, or add natural honey or maple syrup to lighter teas for an even bigger flavor explosion.

If you’ve ever been to a ritzy joint to eat, you may have run into the lemon sorbet or Limoncello between-course treat. This is done for a reason: to cleanse your palate. Lemon, or any citrus for that matter, has a tendency to wipe your palate clean. This is obviously disastrous if you’re trying to enjoy the complexity and flavors of a cigar. Essentially, by drinking anything with lemon in it, you’re washing away the last puff you took while inhibiting flavors from developing on your palate on your next puff. So if you take my tip with the black tea, skip the lemon.

I know, I know… What’s the point if you take the venom from the snake? I get it, but it doesn’t change the fact that beer and cigars go well together. Becks, Stella, Heineken, and a slew of other breweries sell millions of barrels annually of their non-alcoholic beer, and it tastes almost identical to their alcoholic counterparts. Of course, most non-alcoholic beers are mild to medium in body, so they pair better with more mild and medium bodied cigars. So until they make a non-alcoholic stout, full bodied fanatics may be out of luck.

This is rather debatable, but I stand firm on the “do not” side of the aisle. At Altadis Cigar Company, a group of experts called the Groupo de Maestros smoke blend after blend of new and old cigars to ensure consistency and well balanced flavor for their traditional lines and new lines being tested before they go to market. Not one of them recommends drinking water while testing, opting more towards coffee as their go-to pairing. This is because it’s believed that water washes away flavor between puffs, preventing them from experiencing the development of flavor from the cigar on the palate. That’s not to say people don’t enjoy simply drinking water with their cigar. Many people often do in order to take a puff, cleanse their palate, and then experience the next puff. But in terms of development, this offers smokers snapshots of particular puffs rather than a full length feature film about the cigar’s complexity.

By now, you probably think I’ve lost it, but Hot Chocolate is a fan favorite in the industry. If you think about it, this is another home run when paired with the right cigars. Stogies like the Java, Tabak Especial, or the new Nub Café line are obviously great pairings, but traditional lines like the CAO Colombia or even the 90 Miles 1980, which both have a rich nutty and creamy profile, thrive with this pairing as well. The chocolate will help bring out similar flavors in the tobacco along with some earthiness, and the mild flavor of almond milk will help bring out any nutty or creamy notes in a richer cigar. The pairing is made for the Gods.

Sure, there’re cigars that offer light natural sweet and fruit flavors like fig, honey, and the like, but adding more to the fire can be really overwhelming. These flavor notes should be coddled out of the cigar rather than Mola Ram ripping it out screaming “KALI MA!” Fruit juice tries to drag every last bit of fruit flavor out of a cigar and eradicate flavors like wood, spice, and cream. Also, citrus juices like orange or pineapple juice work the same way as lemon water in that they are essentially palate cleansers. Whatever you do, try to stay away at all costs, especially if you’re a smoker who enjoys richer flavors.

In the end, it really all comes down to preference. Everyone has their perfect pairing, whether it be alcoholic or not, and I certainly don’t know what revs your engine. Maybe you like sucking on lemons in between puffs. Who am I to judge? It certainly throws my “no lemon rule” into the meat grinder, but what suits me may not suit you. But these pairings are some of the most popular in the industry, across all lines of smokers. Try them out for yourselves, and tell me what YOUR favorite non-alcoholic pairing is in the comments below.

If you are interested in pairing cigars and spirits check out this cigar pairing guide created by Famous Smoke Shop!

Dr. Pepper and anything

Baja blast was surprising how well it paired with sticks. Baja blast and kamikaze by crimson Lord was mind blowing. Good read as usual. Thanks partner.

Summer time I have a big glass of iced tea and winter time I usually do hot tea!

Chocolate in ANY form is good with a good smoke.

Since I no longer drink spirits of any kind, my go to beverage is coffee. I buy a variety of coffees including flavored beans to add to my experience. I am surprised that I already choose Ginger Ale of Root Beer when I want a cold drink to pair my cigars with. Good minds think alike.

Reading Time: 12 minutes Is your cigar stash growing? Learn how to use a wineador to store your cigars – and see our review of the NewAir CC-300H wineador, as this maybe your next storage solution. BONUS Promo code inside!