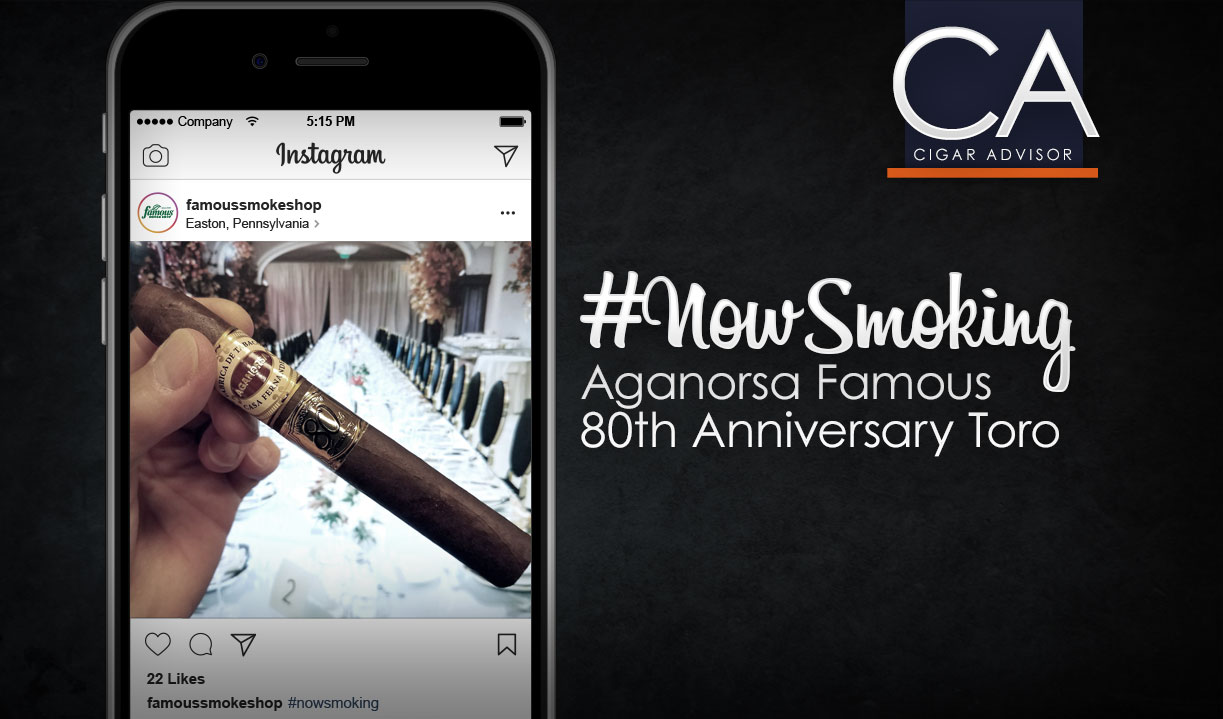 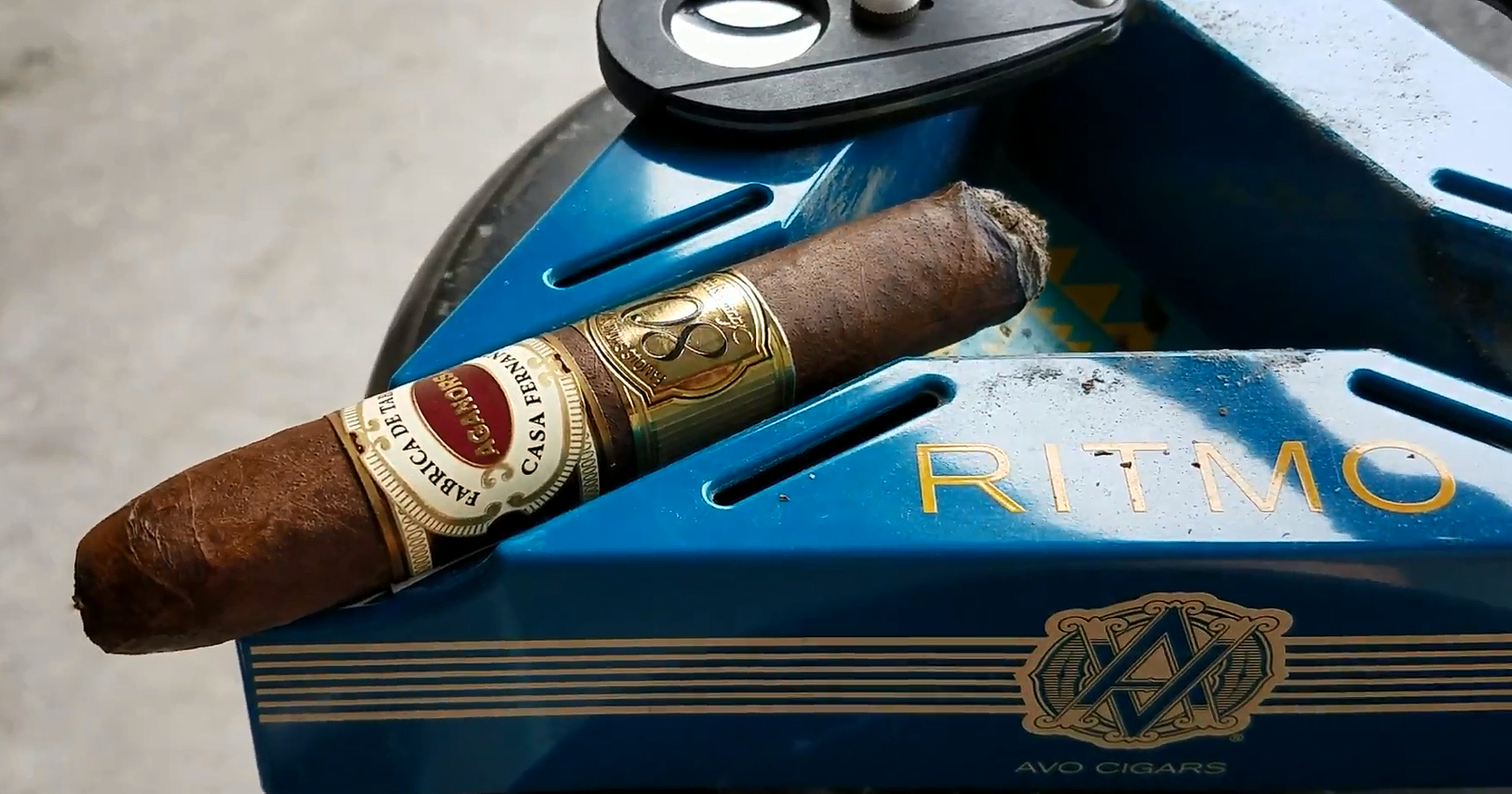 The Aganorsa Leaf Famous Smoke Shop 80th Anniversary Toro is the second in a series of anniversary cigars made by a leading manufacturer to celebrate Famous Smoke Shop’s octogennial milestone in business. Made in limited edition and handcrafted with a blend of Aganorsa estate-grown tobaccos at its core, the cigar is well-built and dressed in a dark, shimmering Mexican San Andres maduro wrapper. The smoke is creamy, dense and full-bodied, with base notes of earth, oak, sweet tobacco, and pepper, which results in a rich, complex smoke with several change-ups along the journey. The cigar paired nicely with coffee, and should also reveal more niceties with a fine Bourbon or Añejo Rum. Cigar smokers who enjoy the full flavor and complexity of cigars like Liga Privada and the Padrón 1926 will appreciate the finer qualities of the Aganorsa Famous 80th Toro.

First, give me the back story.

The Aganorsa Leaf Famous Smoke Shop 80th Anniversary Toro cigar is a one-off created exclusively to celebrate the major online retail cigar store’s 80th year in business. This limited edition cigar was handcrafted at the TABSA factory in Estelí, Nicaragua in a box-pressed “Toro Marblehead” format that measures 6” x 52 and boasts a dark and oily San Andres maduro wrapper from Mexico. Beneath the hood lies a filler and binder core of proprietary Aganorsa farm-grown tobaccos. The cigar sports the familiar Aganorsa Leaf (Casa Fernandez) band at the neck, plus a secondary gold band displaying the text: Famous Smoke Shop 80th Anniversary. The cigars are presented in boxes of 10 of which only 250 were made.

The Aganorsa FSS-80 Toro is solidly built throughout and boasts a handsome, tapered head with a well-fashioned cap. The wrapper has a rich-looking, dark chocolate hue with a slightly toothy, leathery appearance that shimmers with oil. The cigar had no soft spots, the seams were barely visible, and once clipped, offered an effortless draw.

For this review, I used a twin-blade cutter and gave the head a slanted “Dickman cut.” The smoke was creamy, chewy and smooth from the start, offering some initial pepper, earth, and sweet tobacco that segued to a more oaky flavor in the subsequent stages. The ash was almost entirely grey, quite firm, and tapped-off in one-half to one-inch nuggets. The latter stages revealed more earth, oak, and peppery spice as the sweeter elements faded. However, the cigar remained smooth, creamy, and full-bodied down to the nub.

I should mention that I smoked the cigar in my garage on a particularly windy day, which gave the cigar a bit of a beating, causing the wrapper to break-up just passed the midsection. However – and this is what really impressed me – the smoke held-up in spite of being a little skinned in parts. At that point, the cigar’s appearance lost some of its luster, but since it continued to burn evenly, for the most part, I toughed it out, which still resulted in a very satisfying cigar. 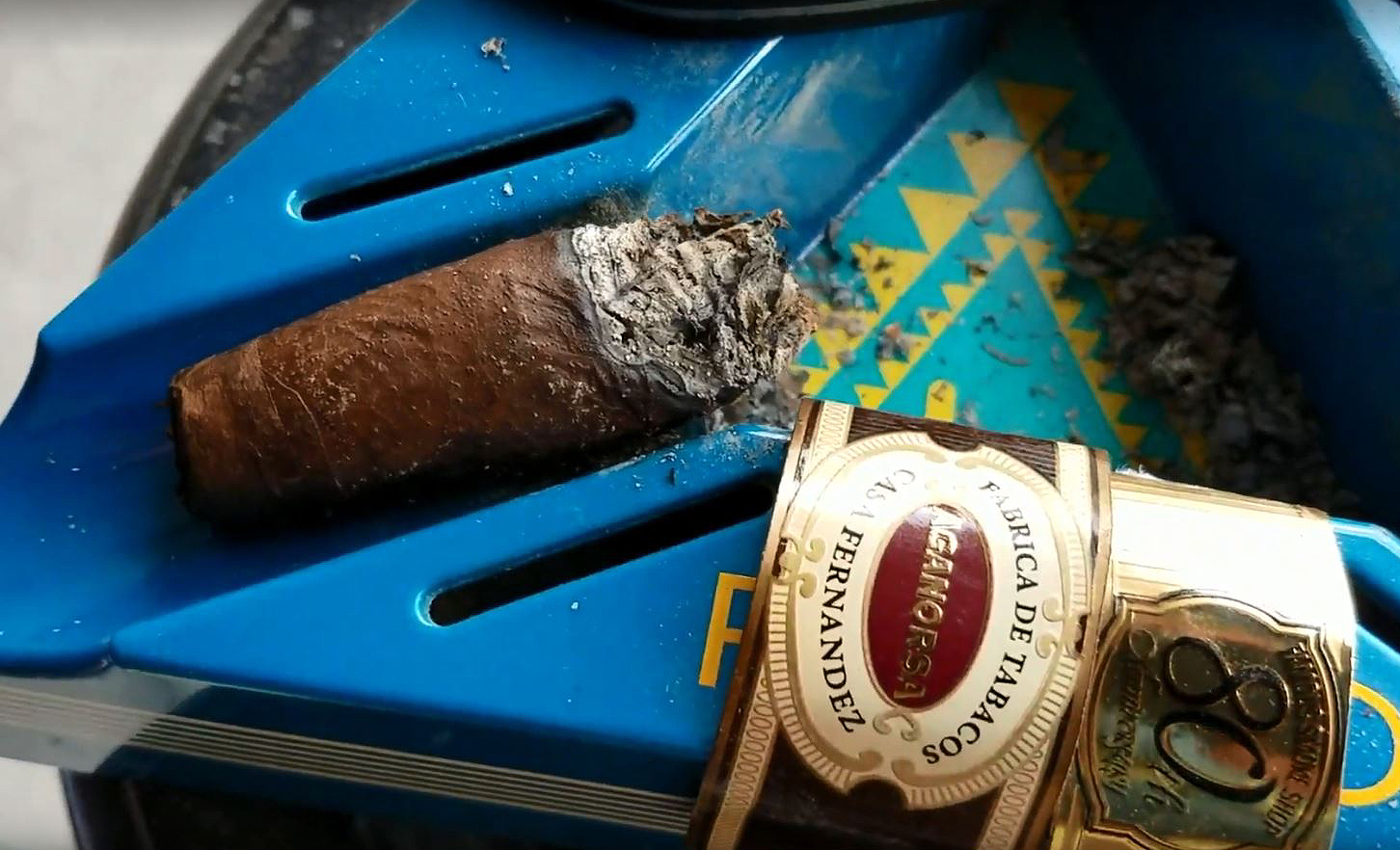 The cold draw offered some saltiness and sweet notes. After lighting, notes of cream, earth, and sweet tobacco were revealed and stayed true through the first third leaving a long, slightly peppery finish on the palate. At the midsection, an oaky note emerged and mixed well with the sweeter elements. At one point, I got a slight berry note, but it didn’t return, although I did pick up a hint of coffee bean. By the final third, the sweetness subsided, leaving notes of earth, pepper, some oak, coffee bean, and the faint remains of sweetness. As for the retrohale, it was mostly peppery, yet far from irritating. Overall, the cigar was full-bodied, and even a little heady after putting it down.

Yes. Brimming with flavors of earth, oak, sweet tobacco, and pepper, the earthy elements came and went, as did the sweeter notes. The darker elements – earth, peppery spice, and coffee bean, finally coalesced in the final inches.

As usual, I smoked this cigar with barely-sweetened coffee, and it was quite satisfying. Yet, I think the Aganorsa Famous 80th Toro would do well with a dark Añejo rum like Zaya Gran Reserva 16 Year, or a sweeter bourbon like Jack Daniel’s Gentleman Jack.

Absolutely. Besides, it’s a limited edition that will draw a number of collectors. Moreover, priced at just under $10 (at press time), the Aganorsa Famous 80th Toro is a bargain.

Reading Time: 8 minutes Think Saint Luis Rey cigars are for gramps? Not if you’ve smoked Carenas. There’s a lot going on with this Cuban-style smoke, especially at its fair price. Check out our review and see why we had a hard time putting it down.