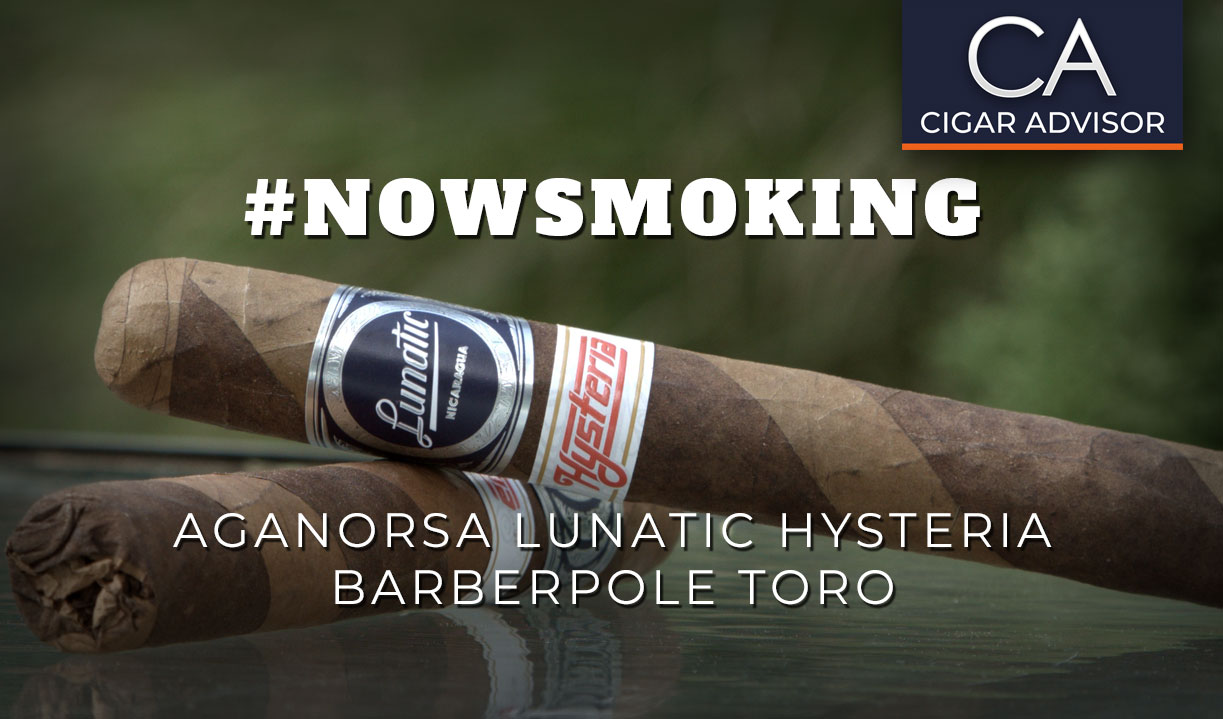 In 2019, Aganorsa Leaf Cigars teamed-up with Famous Smoke Shop for the release of the Lunatic Hysteria by Aganorsa Leaf cigars. Rolled in a dark Mexican San Andrés wrapper, the affordably-priced, three cigar selection quickly became another bestseller from Famous’s private label stable. This year, Famous and Aganorsa Leaf released the Lunatic Hysteria Barberpole, and they doubled-down—literally. By adding an Ecuador Connecticut wrapper to the San Andrés maduro, they twisted them together to create a bold new flavor experience. 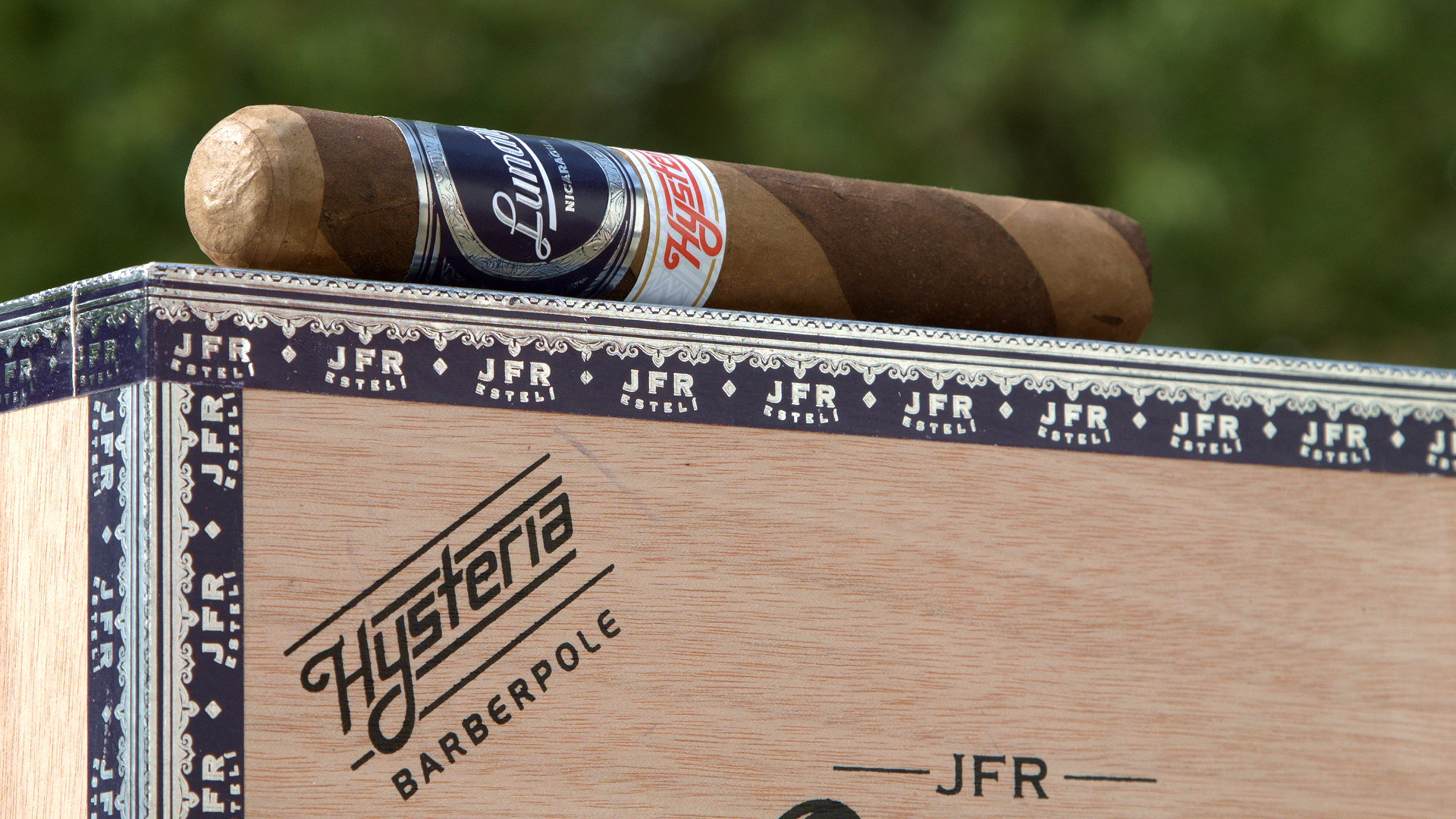 “Lunatic Hysteria is a line we are proud to make, and this new blend is truly in keeping with the Lunatic theme,” said Aganorsa Leaf Sales and Marketing VP, Terence Reilly. “When blending a barberpole, it’s crucial that the two wrappers combine well with the interior components to avoid becoming muddled, and ensure they create a clear and distinctive flavor and aroma. This is incredibly difficult to do, but once you smoke this cigar you will see we aren’t crazy.  It’s an amazing smoke!”

Excellently. The rolling is pristine and the cigar has a very firm feel. I couldn’t find any soft spots along its length, either. The head is neatly applied with a triple seam cap, and the wrappers veil the cigar’s foot for a “closed foot” effect. One small tip: The closed foot may give you a little head start when lighting-up, but try to keep any flying sparks from hitting you. 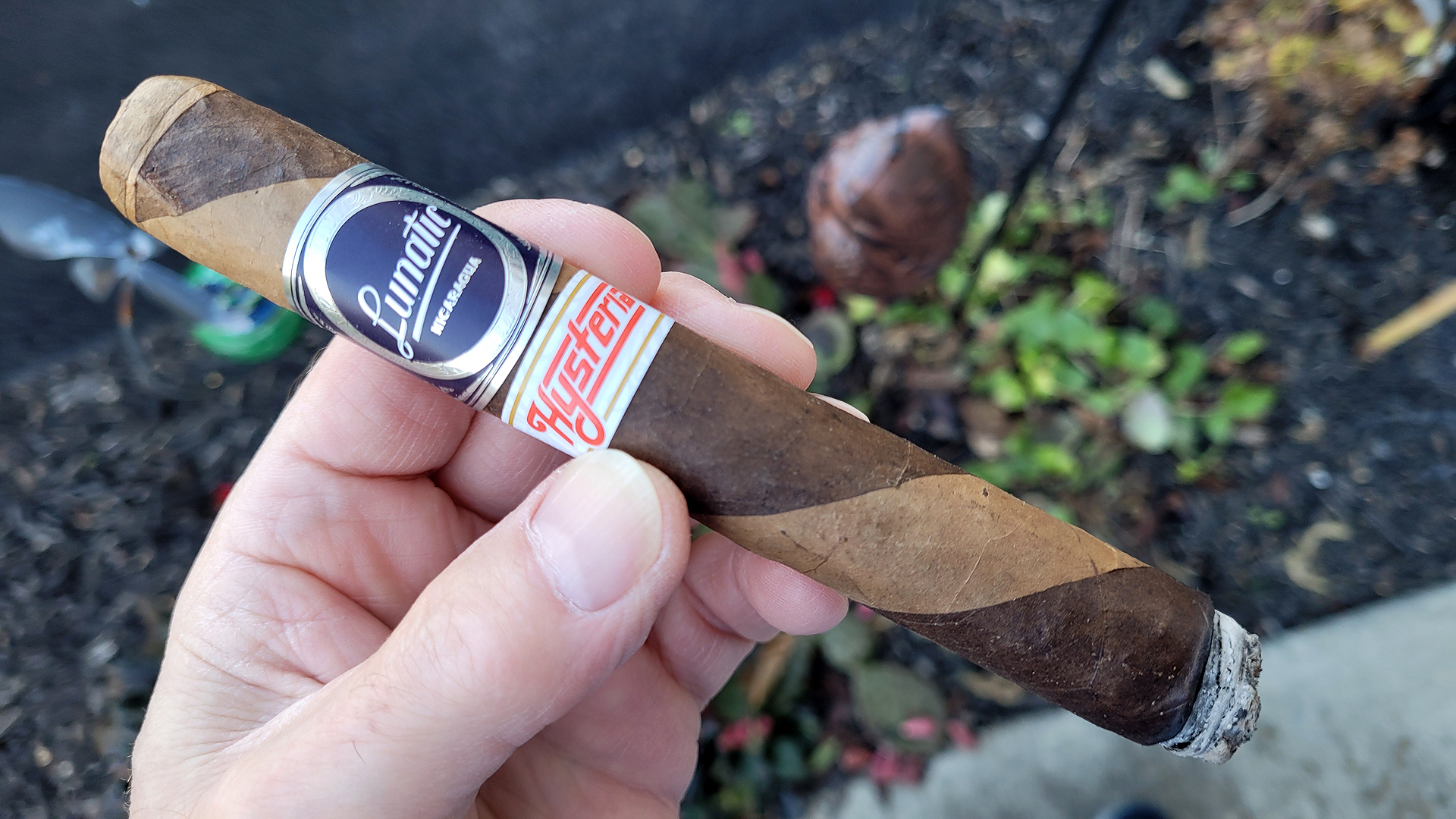 My punch cut resulted in a good draw that offered a pre-light note of cocoa and some nuttiness. Once the cigar was lit, a smooth mix of earth and spice was revealed with a spicy finish. The burn was off to an excellent start, and I was hoping some of that cocoa note would return from the cold draw. The smoke remained smooth and continued along its earthy, peppery spice path for almost the entire first inch. From there, some nuttiness emerged and some sweetness began to creep in, but the body remained full on the palate. 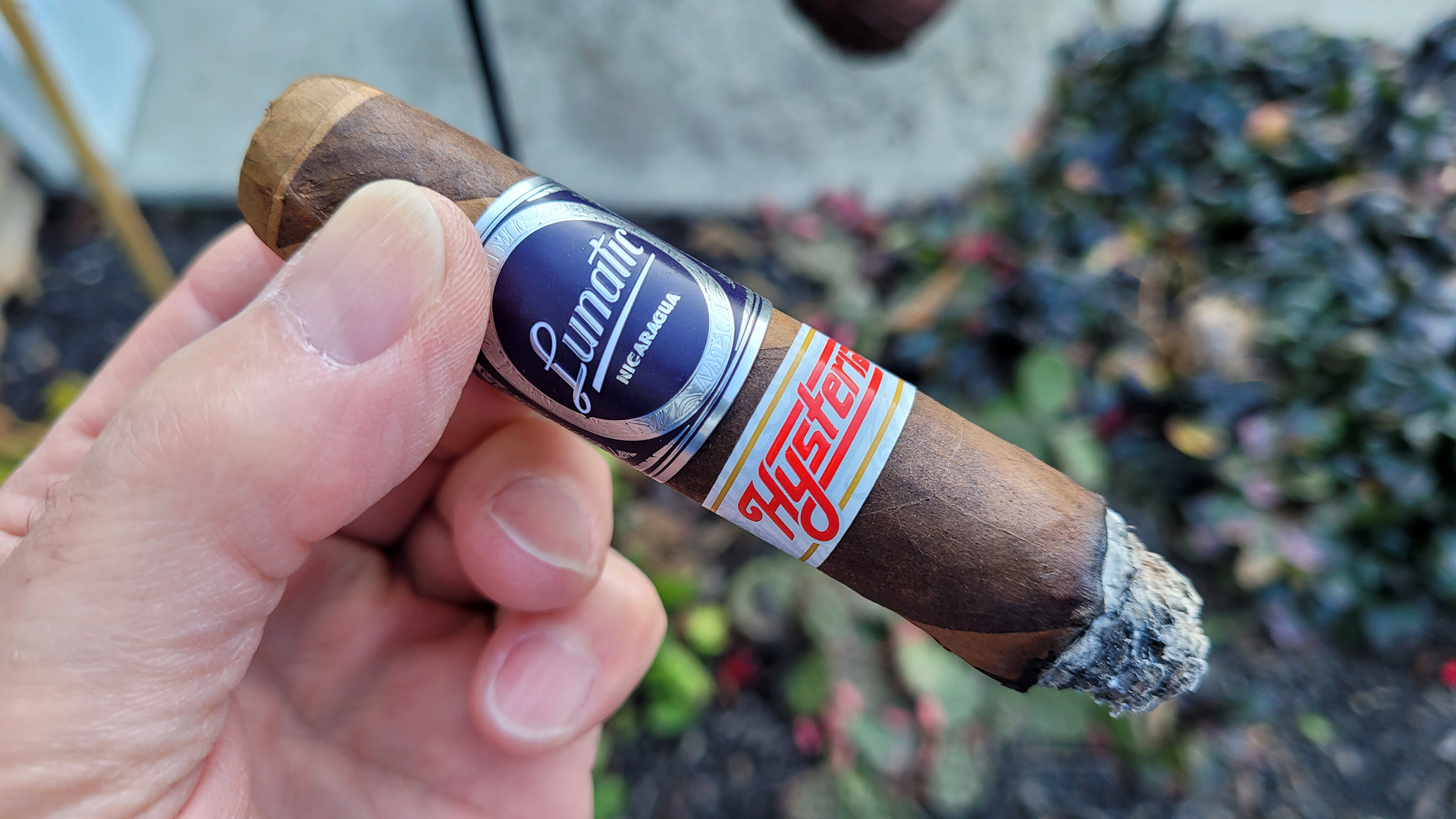 The smoke continued to be smooth, full-flavored, and full-bodied for the most part. The burn also remained impressively even, revealing firm ashes that held on in roughly half-inch to three-quarter-inch nuggets. The flavor profile at this point was a fully open, well-rounded cocktail of earthiness, roasted nuts, cedar, and peppery spice with a glimmer of sweetness squeaking through on a fairly long finish. 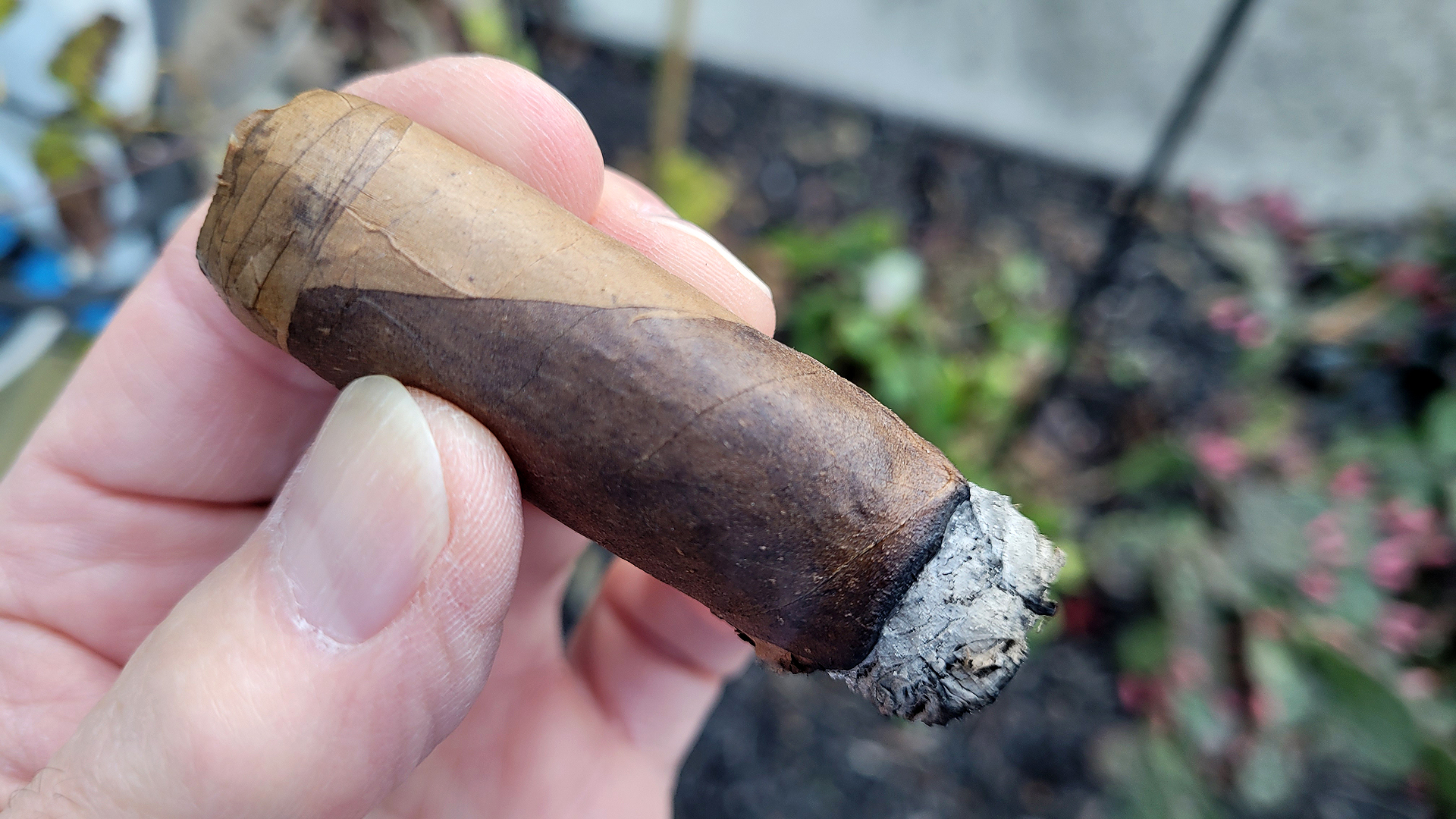 All of the Aganorsa Lunatic Hysteria Barberpole samples I smoked burned perfectly, and didn’t even require a simple touch-up. (Unfortunately, a bit of wrapper tore when the bands were removed.) The final third continued to reveal a creamy, well-rounded mix of earth, cedar, nuts, and sweet n’ peppery spice. Complex? Perhaps, in the sense that you’re getting a nice mix of flavors from the dark and light wrappers, too. Plus, I was able to distinguish between the two as the cigar smoked. The cigar never increased in body or strength, even in the final inches, but it is certainly more “full” than “medium” in both areas.

Pinhook Vertical Series Bourbon War 5 was a good choice for this cigar since the whiskey lent some vanilla caramel sweetness to the palate, but not too much. Rye or even a good dark rum might work just as well for some, but I chose the Pinhook because it was used in a pairing we did with the Siboney Reserve Toro, also by Aganorsa with a similar core blend. 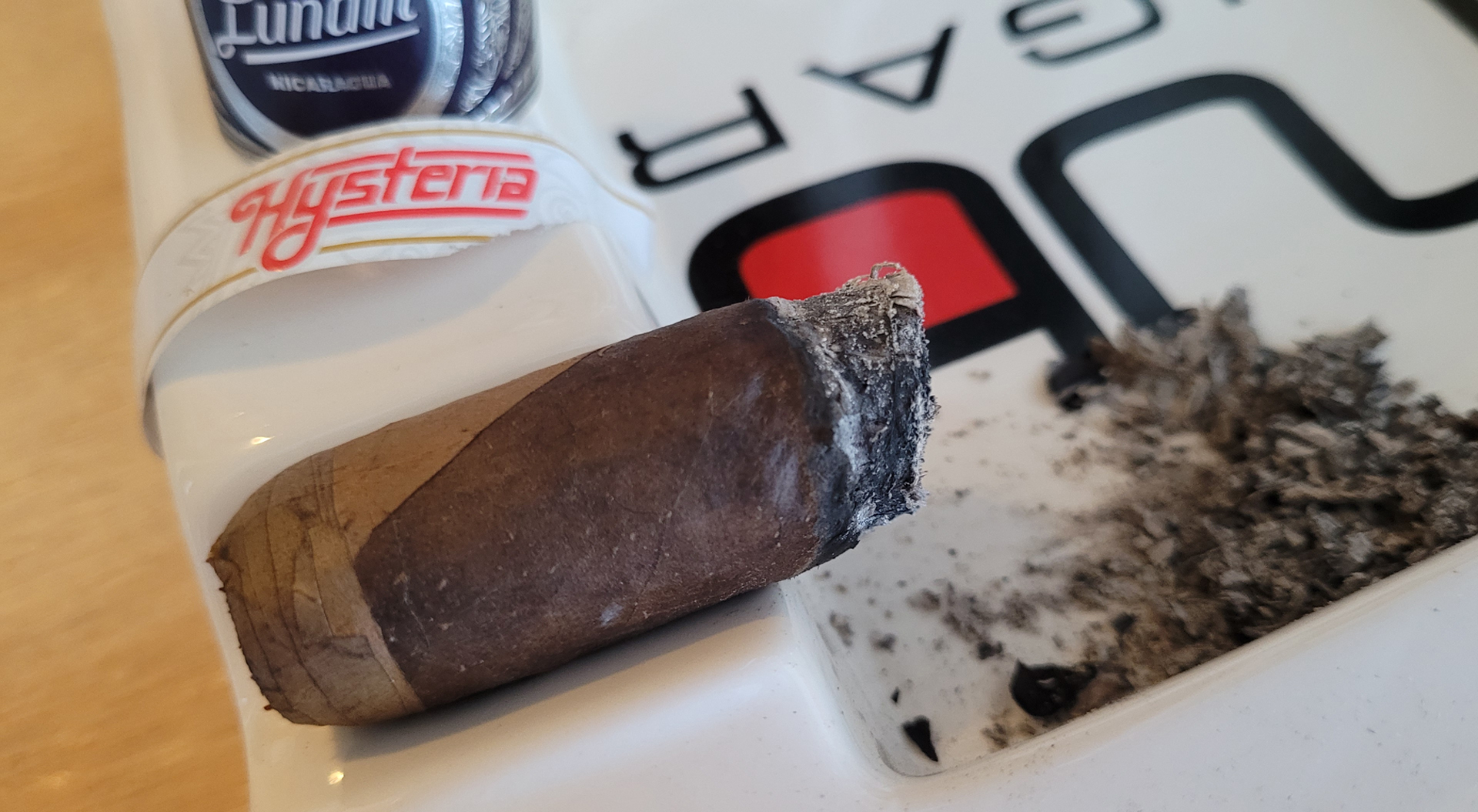 I don’t smoke a lot of barber pole style cigars, but I’ve had enough over the years to say that the Aganorsa Lunatic Hysteria BP Toro was one of the best in flavor and performance. When the dual wrappers hook-up with the Nicaraguan Corojo and Criollo binder and filler core, the flavors unpack beautifully for a well-balanced, full-bodied experience. The burn was also impressive. Some barber pole cigars have burn issues due to the stark difference of the wrappers, but kudos to Aganorsa for nailing this one. The flavor profile was consistent throughout, but the body and strength may be a bit much for newer smokers. On the other hand, this cigar’s reasonable price makes it very worthwhile, and not just for the Aganorsa faithful.

Read More
Cigar Ratings & Reviews
This Nicaragua-made Trinidad is a heritage-brand cigar that Cubans would love - even though they might never admit it. My Weekend Cigar was the Trinidad Esteli by Plasencia: full-flavored and affordable, making it a perfect pick for smokers of any experience level. See the tasting notes in this quick review now!
Read More