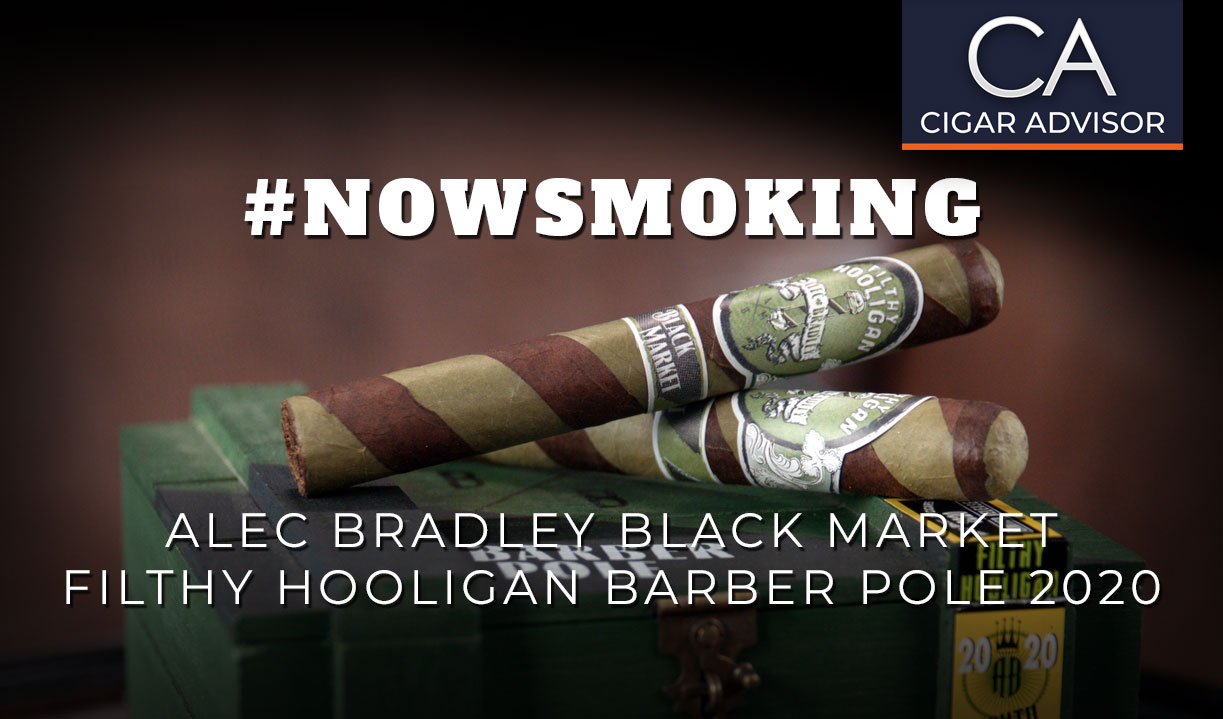 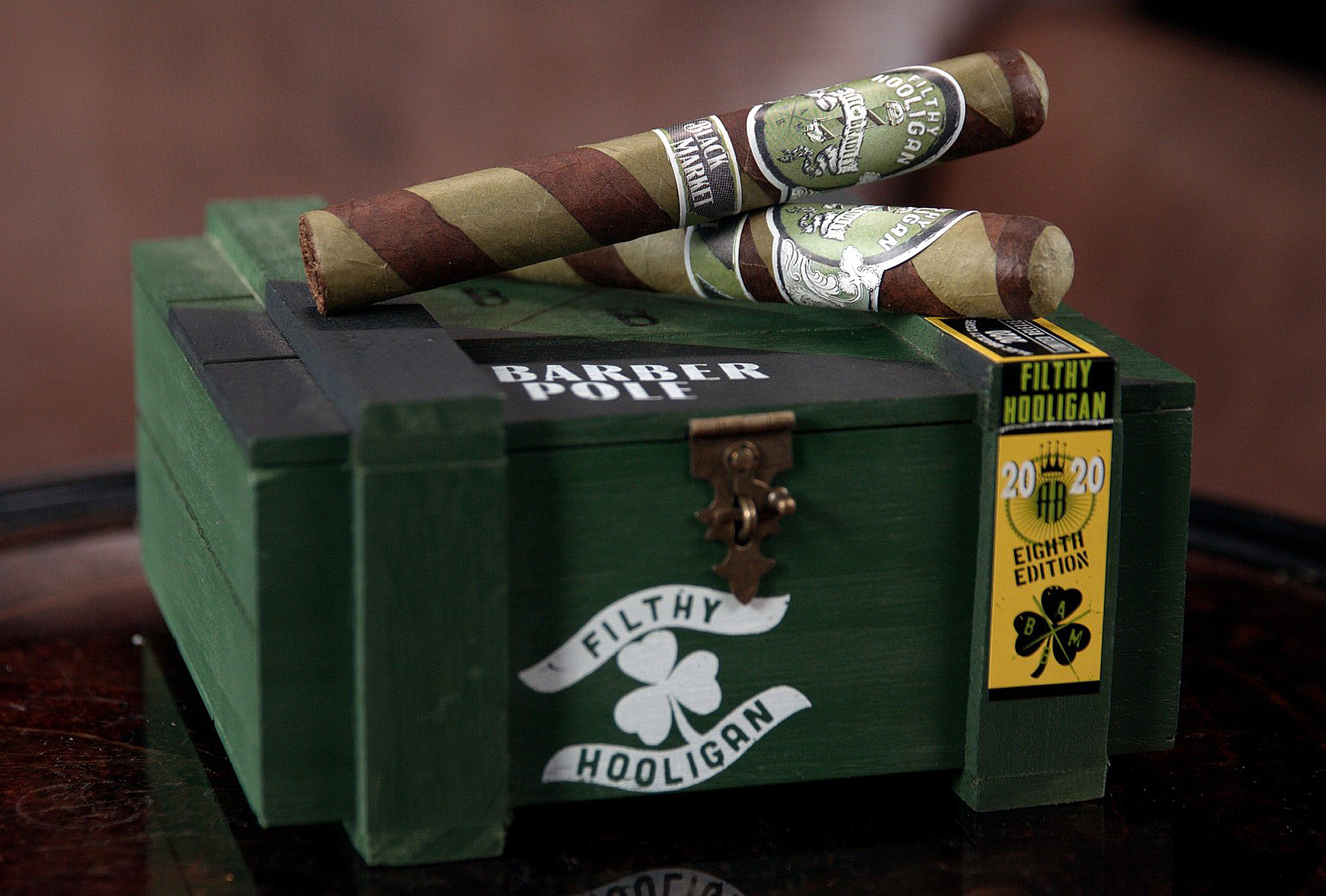 The Black Market Filthy Hooligan cigars first made their presence known in 2013 and have continued to evolve with resounding success. According to Alec Bradley Cigars co-founder, Alan Rubin, “Back in 2013, we came across some beautiful candela wrapper that we didn’t necessarily have a project for. The wrapper was sweet and earthy, and although we didn’t have a large quantity of it, we had enough to come out with a limited release of a couple of thousand boxes. We thought it would be cool to launch it in the spring, when everyone is thinking green, right around St. Patrick’s Day. We presold-out the entire first production in a couple of weeks and the demand was high.” 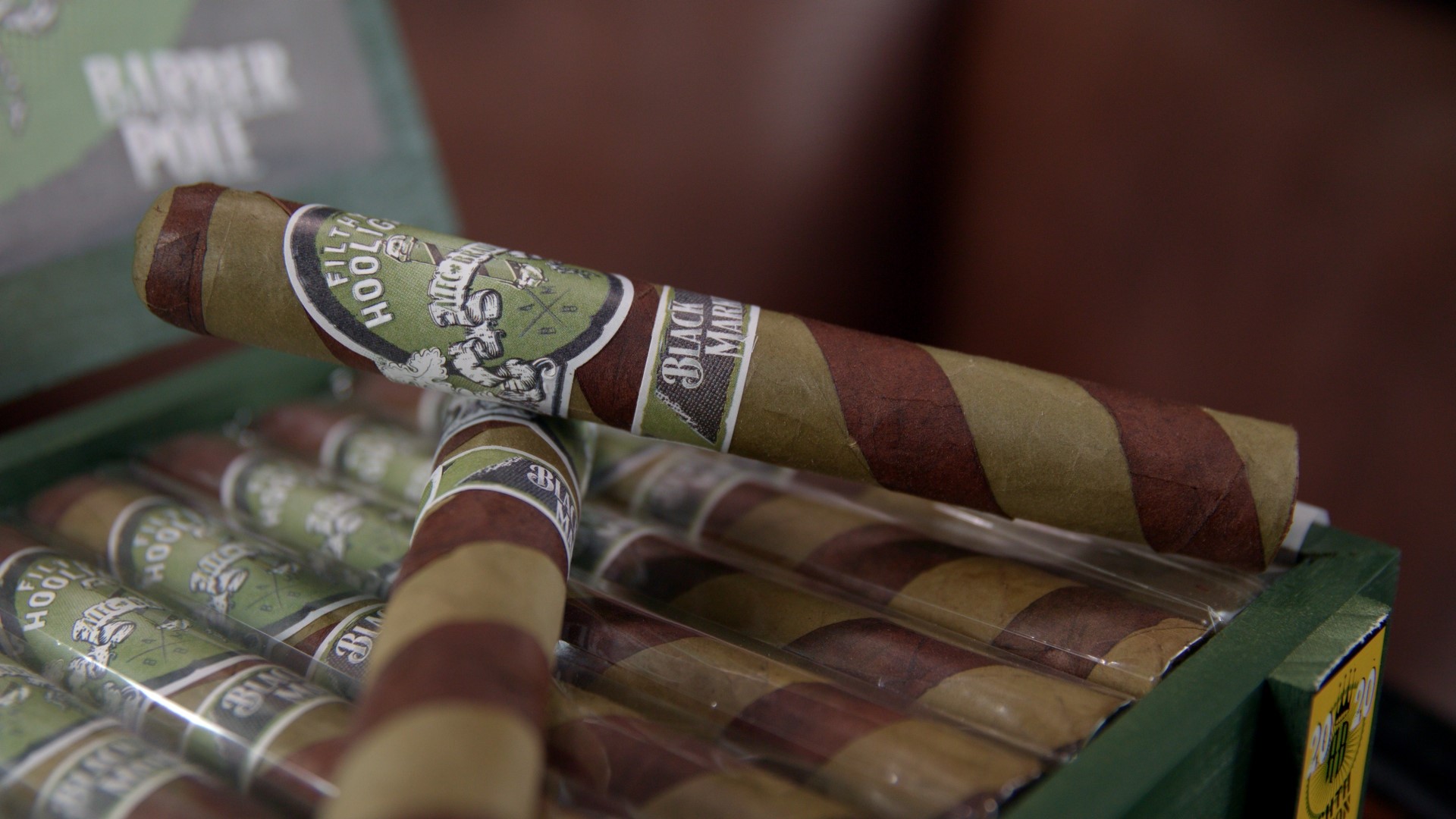 The cigar retained its Candela wrapper for the next several years, until 2016, when they decided to do something different. The cigar became knows as the Black Market Filthy Hooligan Barber Pole cigar and featured a subtle Candela wrapper intertwined with a dark Nicaraguan Jalapa wrapper leaf, which added a richer flavor, accentuating the more delicate tasting notes of the Candela. Underneath the dual wrappers is a complex blend of long-filler Honduran and Panamanian tobaccos, held together by a flavorful Sumatra binder. 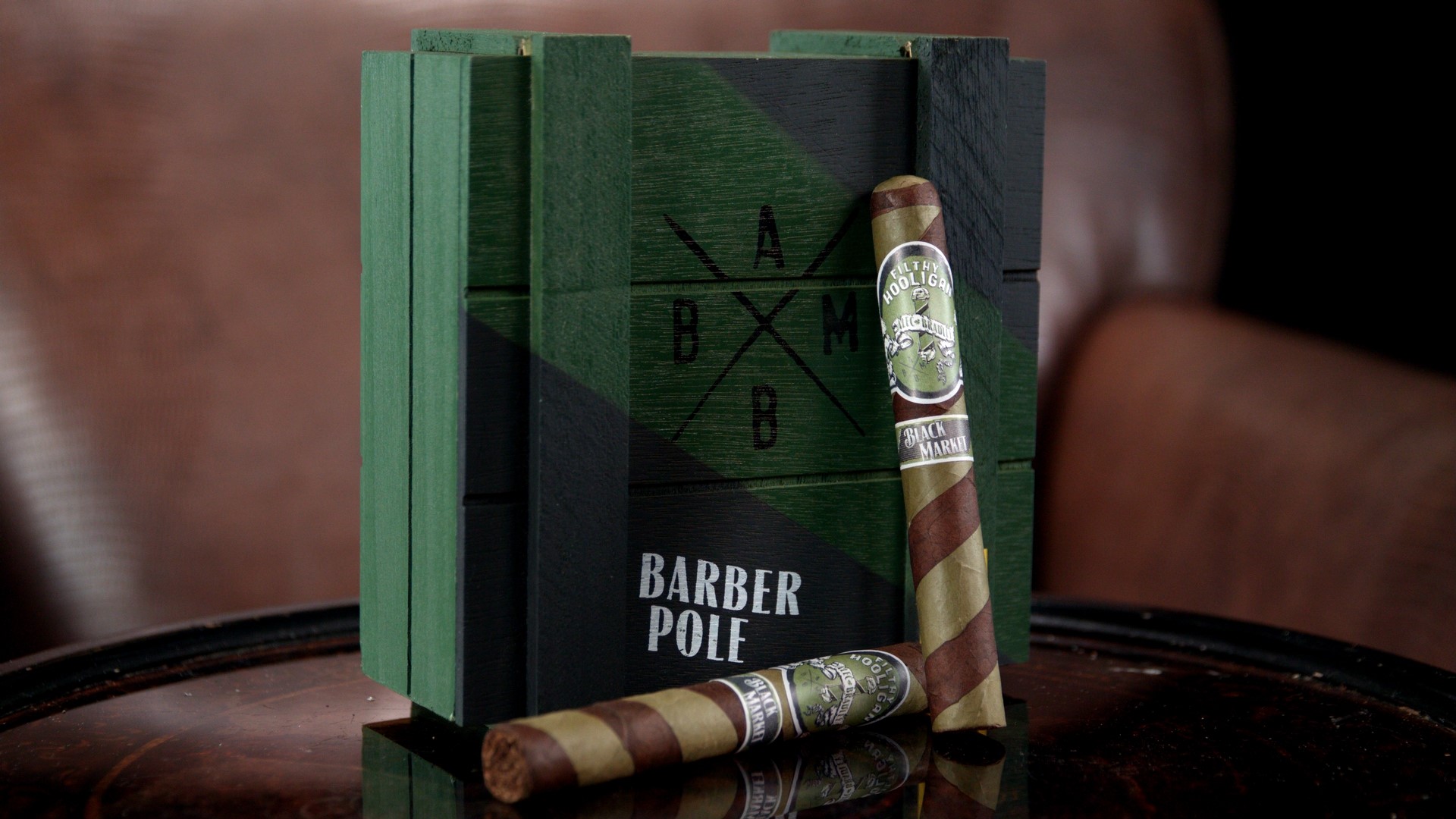 “In 2018, my two sons, Alec and Bradley, were with me in Central America on a blending trip,” continued Alan. “In the processing room we saw some bright green candela that the factory had been testing, but hadn’t blended with yet. We took some to the rolling tables and began to see if there was some way we can use it. Alec had the idea of trying a triple-wrap cigar and maybe adding to the Hooligan series, Bradley already had artwork in mind. We worked with many different tobaccos and came up with a rich, naturally sweet and complex blend: Filthy Hooligan Shamrock.”

“This is now the 7th year of the Alec Bradley Filthy Hooligan series,” said Alan, “and after the initial release, every Hooligan iteration has sold out six months before they hit tobacconists’ shelves.”

Meanwhile, the Black Market Filthy Hooligan Barber Pole cigars (still, yet barely, in stock at this writing, are limited to 2,000 twenty-two count boxes worldwide, with a suggested retail price of $10.50 per cigar (at press time). 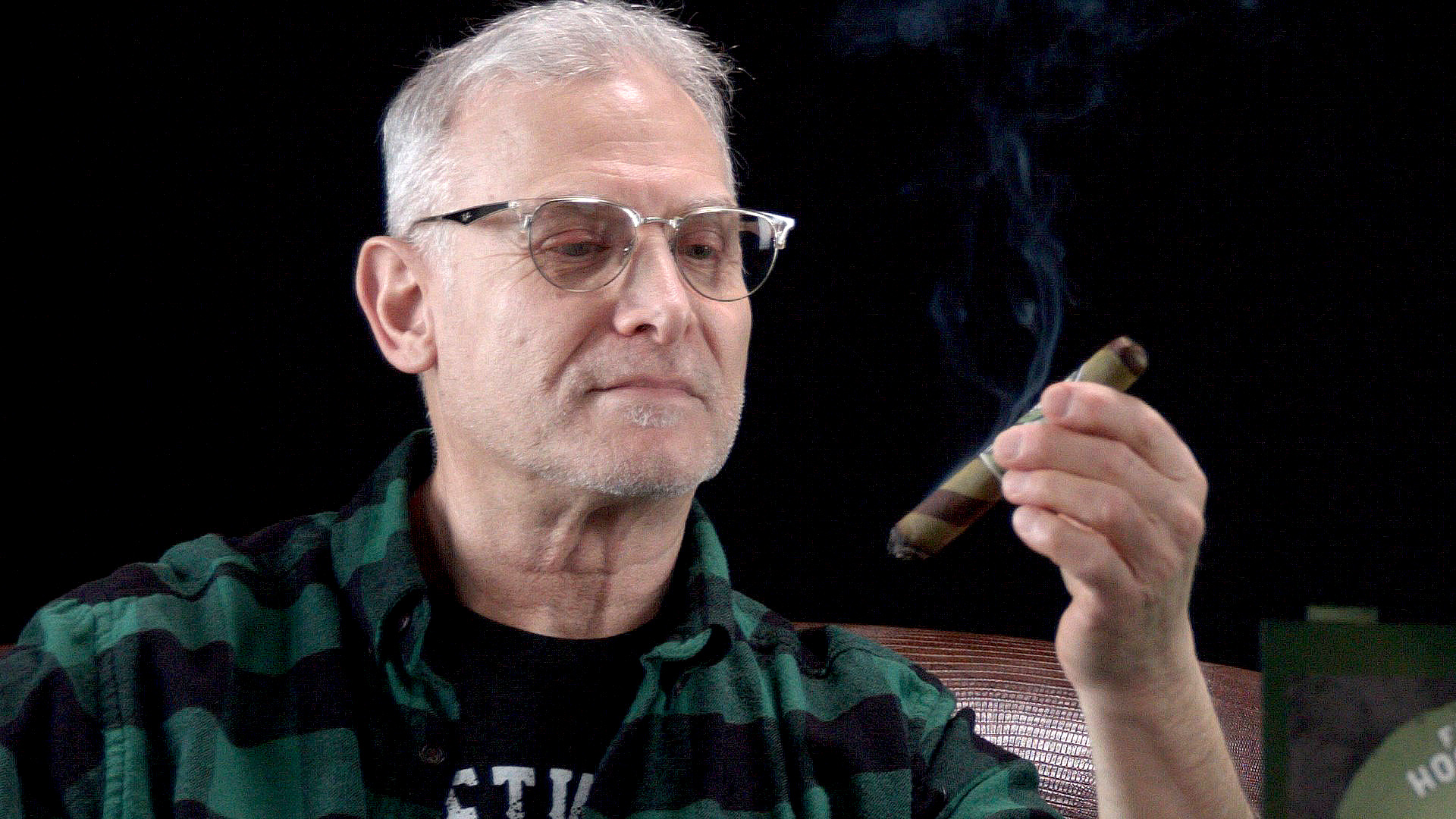 About as good as it gets, especially for barber poles. The cigar is beautifully rolled, has a solid feel in the hand, and finished with a triple seam cap. The primary neck band features the familiar Irish green color scheme with the image of a barber pole, and a secondary band signaling that it is part of the Alec Bradley Black Market cigars collection. The cap cuts cleanly and the breezy cold draw reveals sweet and woody flavors with some saltiness for me and a trace of spice for Jared.

Revealing a sweet, woody and earthy start out of the gate, plus a peppery spice finish, the smoke is smooth and creamy. The draw is perfect and emits plenty of well-balanced smoke. Act I is mostly sweet, creamy, and nutty with hints of salt and cedar, as a peppery spice continues to linger on the finish. Act II serves up a pleasant coffee note, which Jared picked-up more than I did. The smoke continued to be creamy, nutty, and the sweetness picked-up as some of the spice faced. 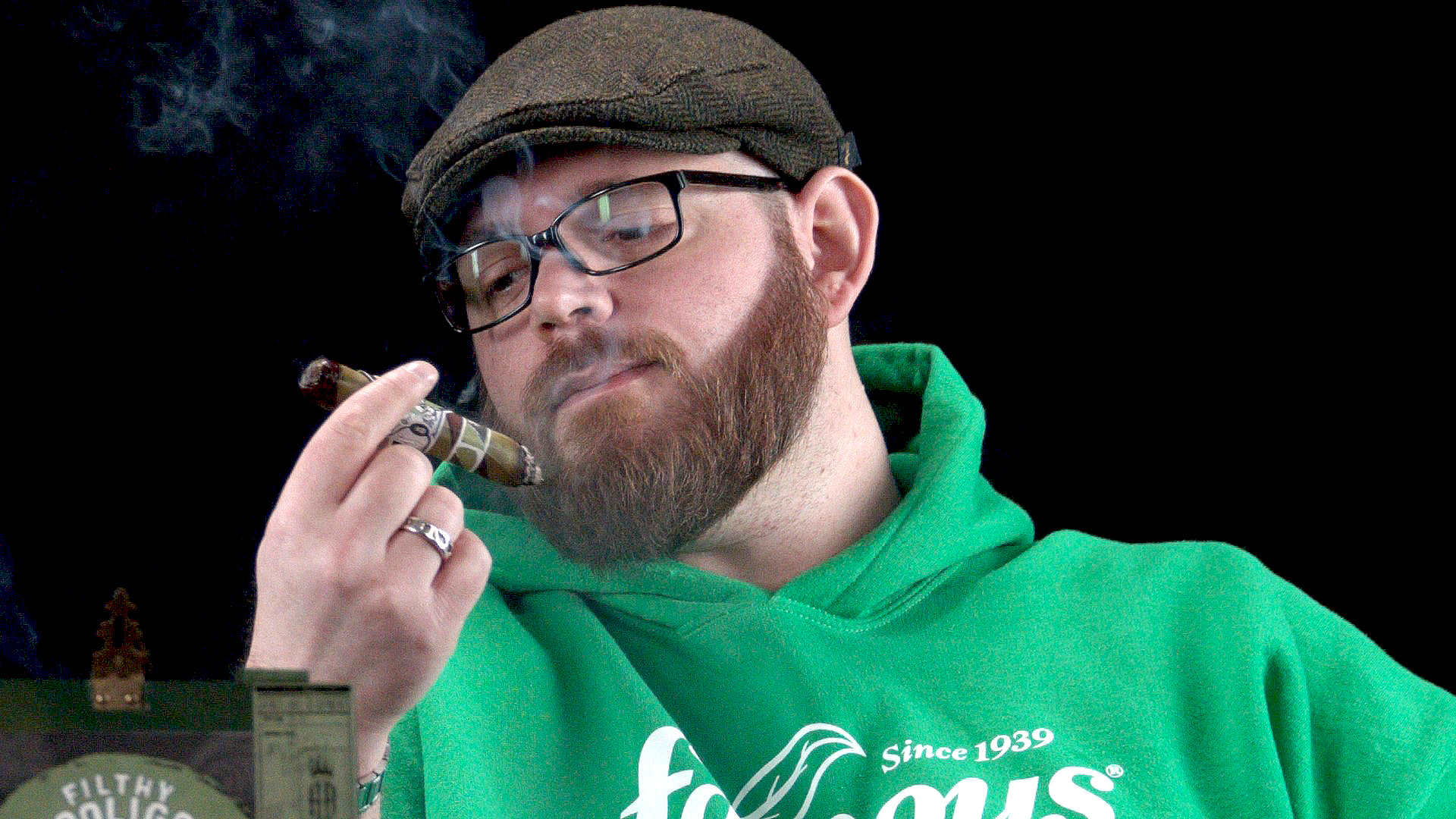 By Act III, the spice re-entered the scene, and the body rose-up, giving the Hooligan a little added kick. Some earthiness also ensued while barely any sweetness remained once you got into nub territory.

Medium-bodied with strength falling in the medium to medium-full range. The smoke is smooth, creamy, well-balanced, and carries a fair degree of complexity with a sweet, nutty, and spicy character. 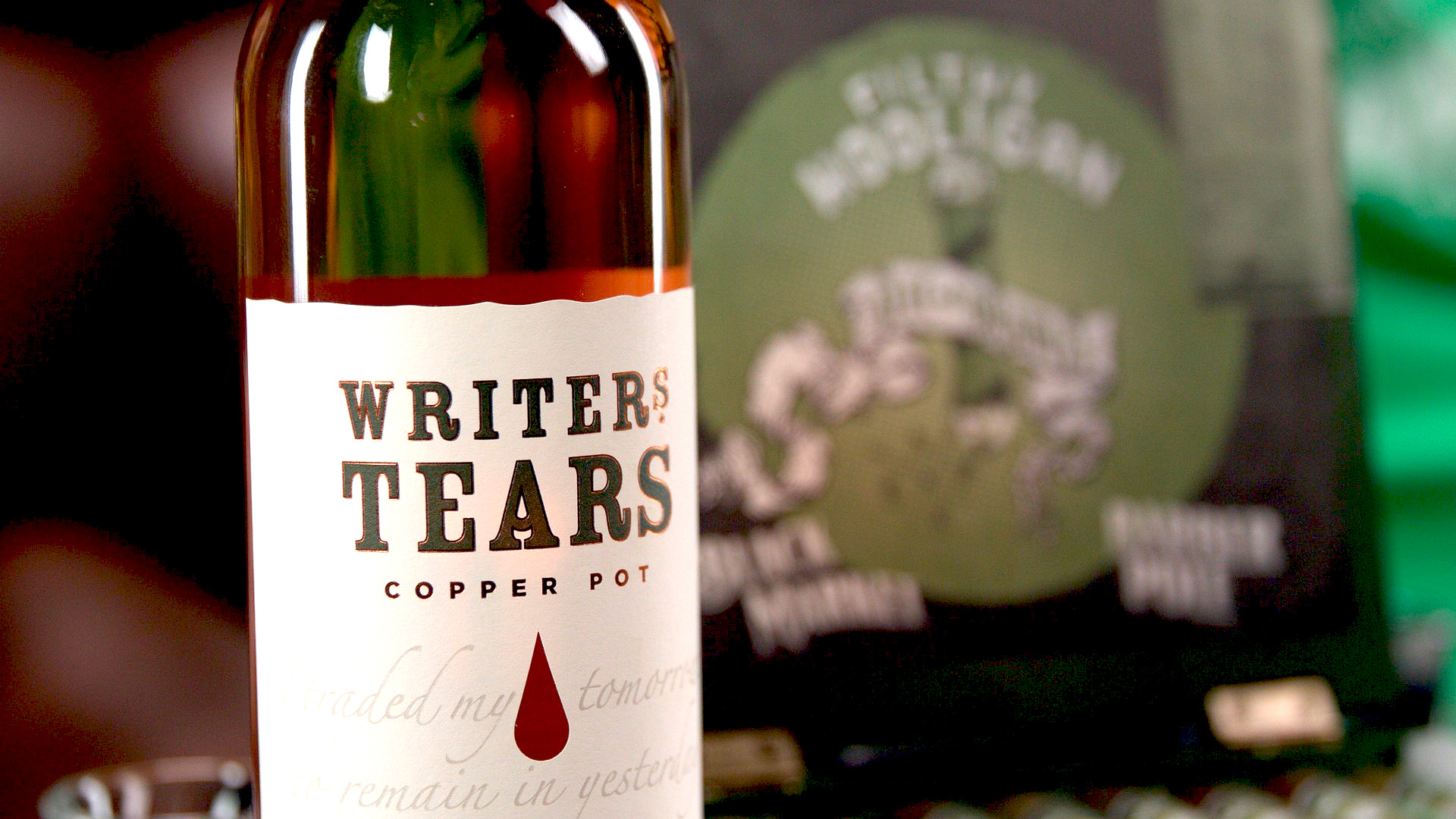 As writers, we went with the very appropriate Writers’ Tears Copper Pot Irish Whiskey. A unique vatting of Aged Single Pot Still and Single Malt whiskey, Writers’ Tears revealed notes of oak, honey, and almonds, which mixed well with the Filthy Hooligan. The whiskey offered a rich, smooth taste, no bite, and the smoke held its own, making for a good balance overall.

If you’re lucky to find any left by the time you read this? Yes! The Alec Bradley Black Market line has proven one of the most popular and highly-rated cigars in the ABC stable. On top of that, Filthy Hooligan is another excellent example of how a great wrapper – in this case two – can impart some impressive mojo to a fine blend. So, for fans of Black Market, Filthy Hooligan is a pot o’ gold, while cigar smokers of every experience will find it a lucky discovery.

Reading Time: 5 minutes The Mi Querida Triqui Traca 552 is the centerpiece of this #nowsmoking cigar review with CigarAdvisor.com’s Gary Korb and Jared Gulick. Allegedly, Dunbarton Tobacco’s “boldest cigar” to date, see if our advisors agreed with that testimony.