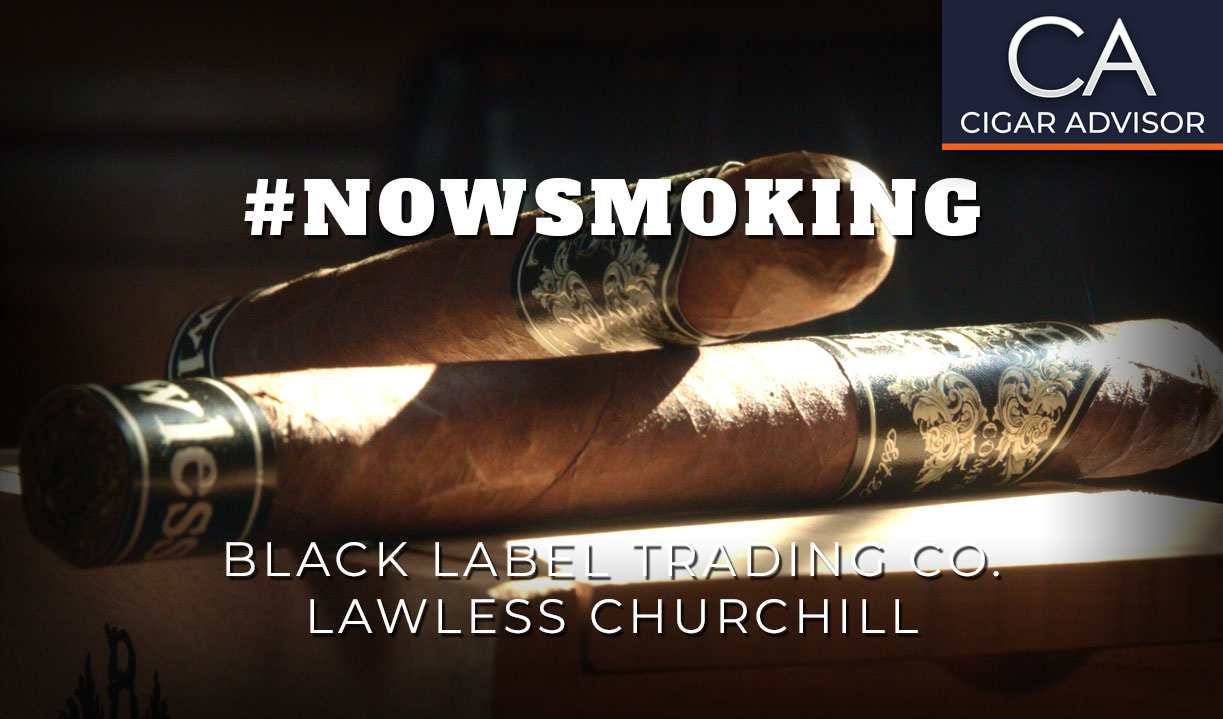 Black Label Trading Company is a boutique cigar label founded in 2013 by James and Angela Brown. The entrepreneurial couple, both of whom love cigars, wanted to create a brand that would differentiate the company from others in the cigar industry. One of their companies, an adventure travel business that hosted excursions to exotic locales, including Nicaragua, is what brought James and Angela into the industry. James, an artist by trade, spent over two years learning the art of tobacco, and he began blending cigars for travelers to enjoy on the trips to Nicaragua. The guests loved the blends, and that persuaded the couple to launch their own brand of cigars, Black Label Trading Company, which are made at their Fabrica de Oveja Negra in Estelí, Nicaragua.

“I wanted the brand to be edgy and a bit dark, but in an elegant way,” said James in a recent interview. “It was important for each cigar to have its own personality and feel. I let the cigars tell a story, and the branding grows out of that. I do all of the artwork for our brands, so each one is a personal expression for me.” 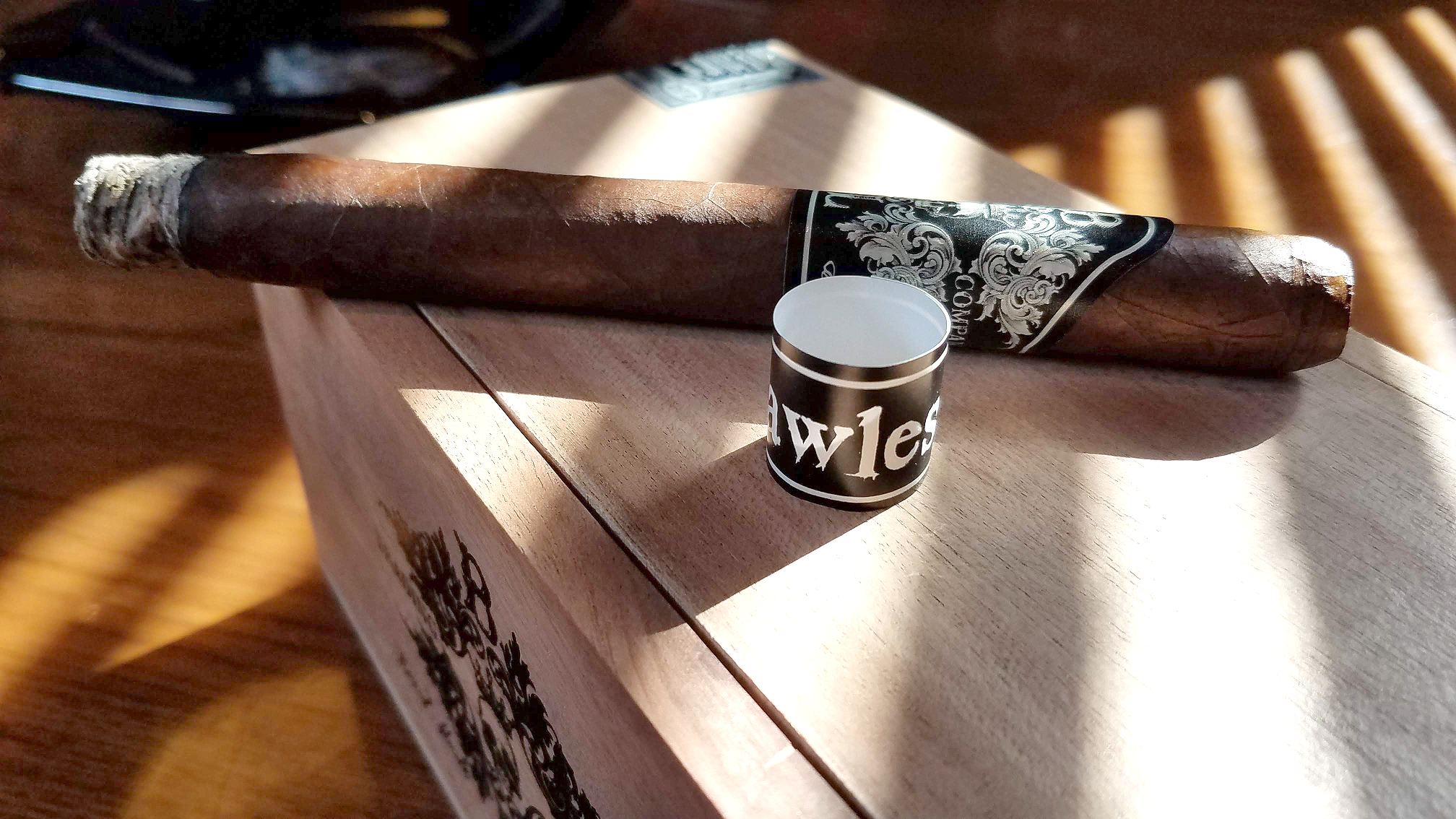 The brand, which includes cigars with names like “Morphine,” “Last Rites,” and “Killer Bee,” may seem a bit too “dark” to some cigar smokers at first, especially when you see the Goth-like black & white artwork that adorns the boxes and bands. Moreover, the company’s initial releases were known for being very bold and peppery. That said, with cigars like Royalty, Benediction, and Lawless, Black Label Trading Company, including their artisanal, limited edition imprint, Black Works Studios, have evolved into one of the top-rated boutique cigar brands that offers something for cigar smokers at every level of experience.

“I can’t picture myself doing anything else,” added James. “Cigars are my life. It’s what I do all day, every day. I love the process and the challenges. This is an extremely difficult industry, and I hope that our experiences—good and bad—can help someone else.”

Extremely well. Finished with a seamlessly fashioned triple seam cap, the Ecuadorian Rosado wrapper was glossy with an attractive reddish patina. The cigar was solidly built, exhibiting no soft spots, and is slightly on the tight side, but no serious draw issues. Pre-light notes included a certain toastiness, some salt, leather, and a hint of mocha. 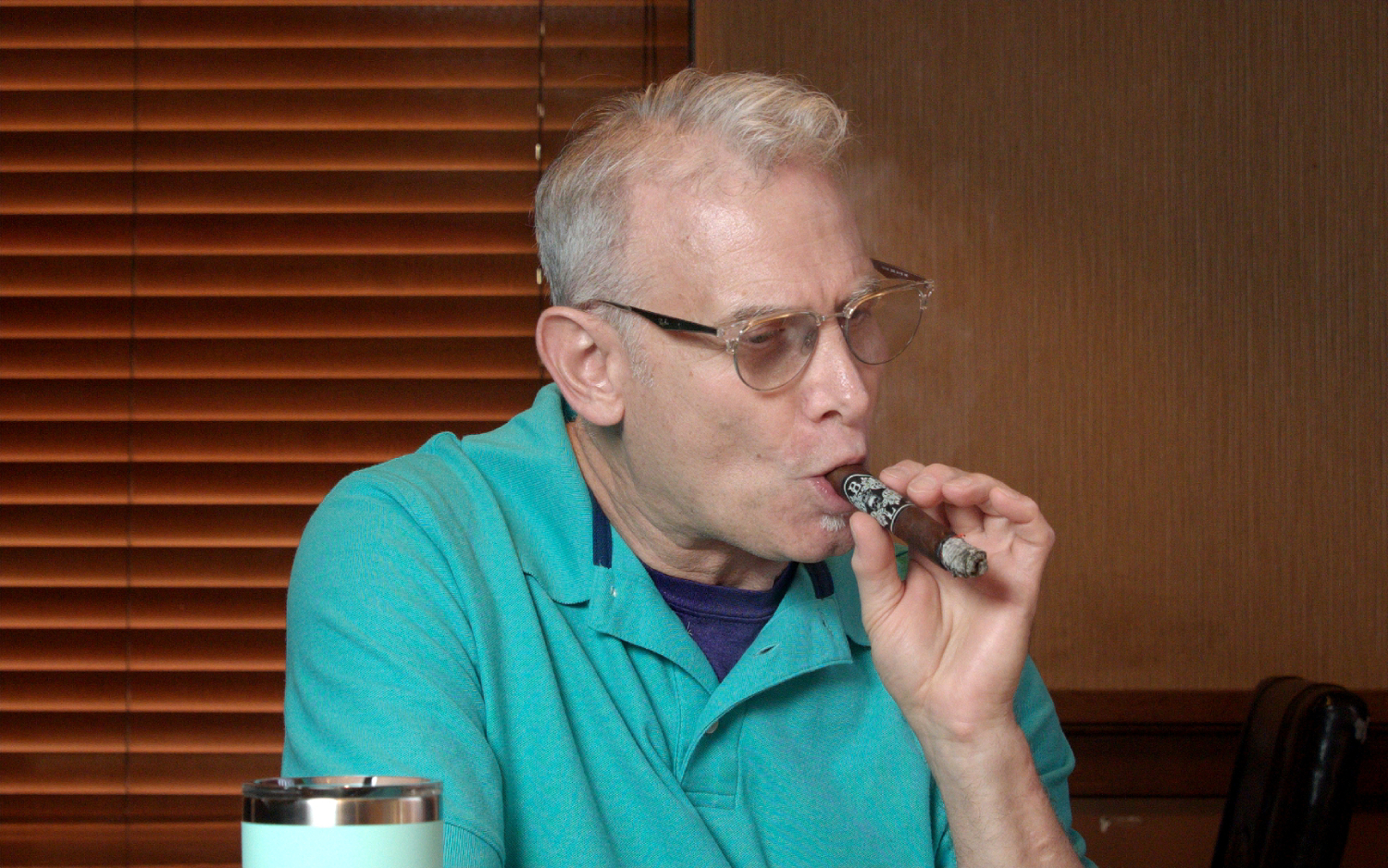 Very well. Some tightness affected the draw early on, but for the most part, the smoke was dense, creamy, and flowed easily to the palate. The cigar burned well, too, with a firm gravity-defying ash. No relights or touch-ups needed. This Churchill also had a sweet, appealing aroma, and developed a decent amount of well-balanced flavors as it progressed.

Yes. Vilma thought it was more complex than I did since, for her, the flavors tended to shift from spicy to sweet, to salty, and back, in what she described as a wave-like pattern. I noticed several change-ups myself, but for me, the flavors were more homogenous and well-defined. 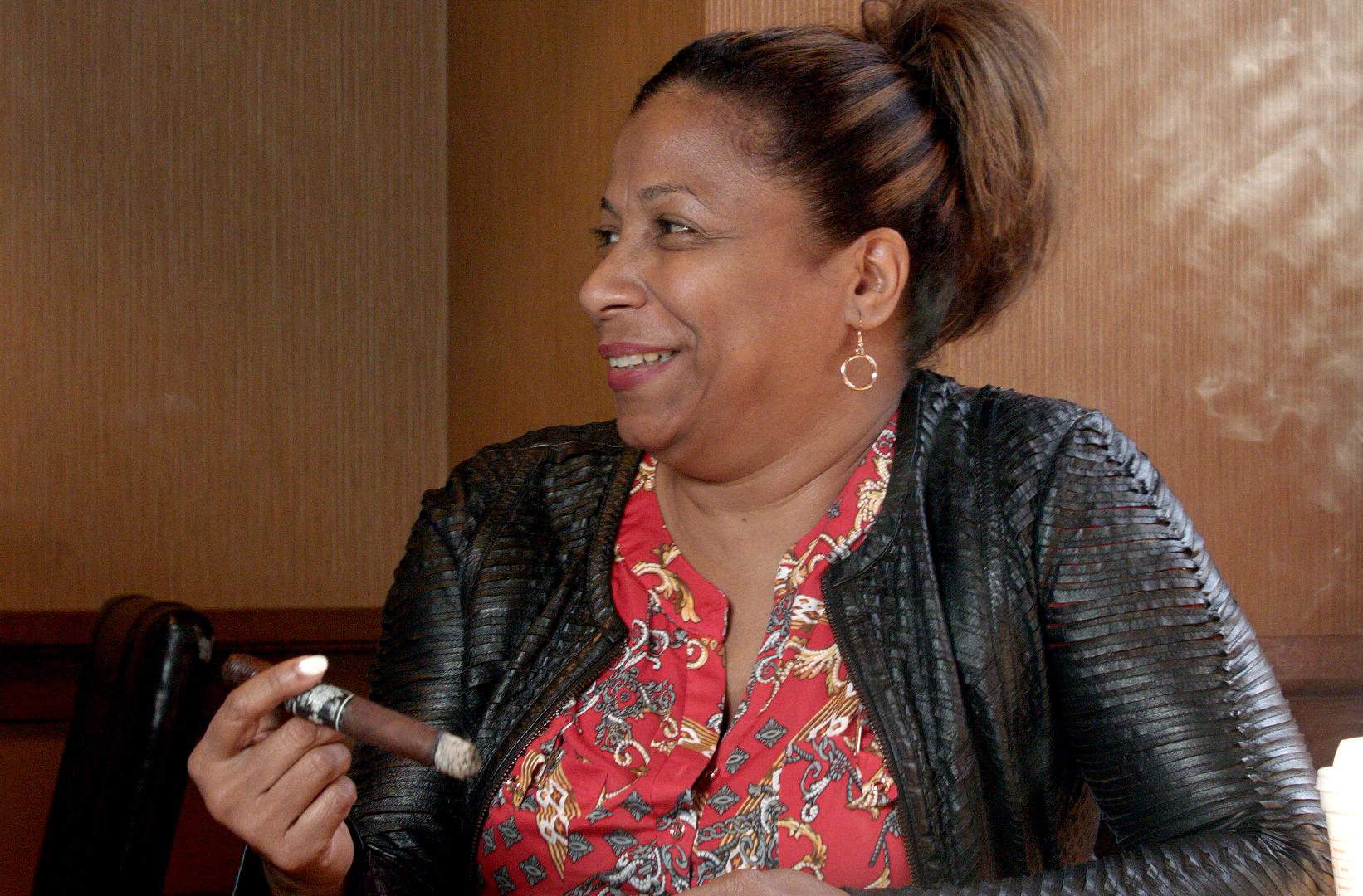 We both felt my iced coffee and Vilma’s hot coffee were a natural. On the liquor side, Vilma suggested the Macallan 12, and I seconded that. Bourbon and long-aged dark Añejo rum were also suggested; although, I felt a good red wine may also be in order. In this case, a spicy Shiraz would serve this cigar well.

We pretty much agreed that this cigar would be best for intermediate level cigar smokers and above for the cigar’s spicy character and medium-full body. Although newer cigar smokers may also appreciate this cigar for its balance and lack of heavy pepper, we also felt, for those very reasons, the Lawless selection – but not necessarily the Churchill – would make a good gateway cigar for smokers interested in get into the Black Label brand. 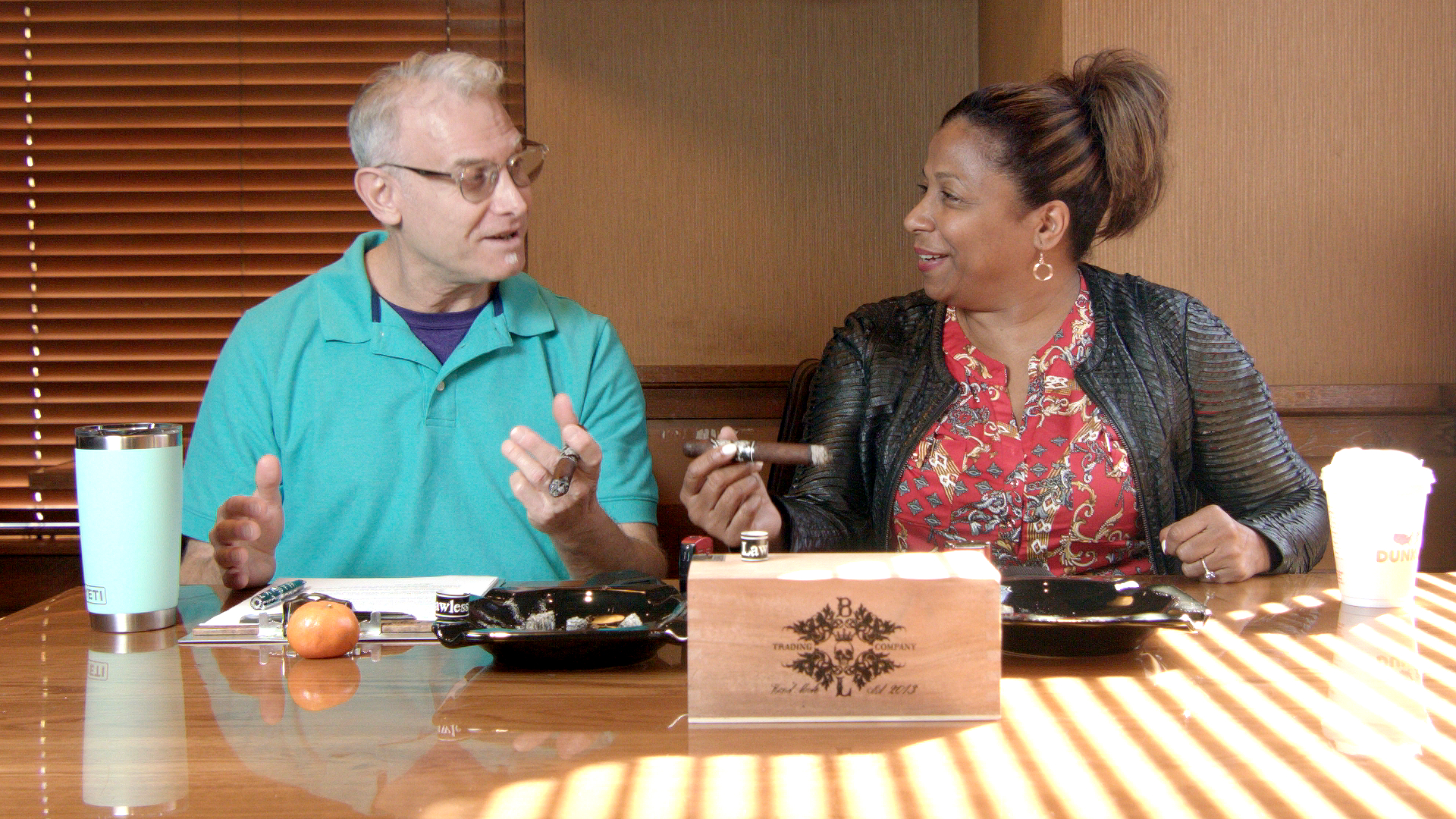 For sure. This was both mine and Vilma’s first Black Label Lawless. We expected it would be much bolder, but in terms of flavor, strength, balance, and aroma, the Churchill checked all the right boxes. Cigar smokers who’ve acquired a palate for rich-tasting Nicaraguan blends will want to pick up at least a few of these. Moreover, I think they’ll home-age nicely within two to three months in a humidor.

AUTHOR’S NOTE: Oveja Negra is the name of Black Label Trading Company’s factory. Oveja is “sheep” in Spanish, so oveja negra would be “black sheep.” However, in the video Vilma thought I said abeja, which sounds very similar and means “bee” in Spanish. This is why we mistakenly said “Black Bee,” in the video. My apologies to the good folks at Black Label Trading Co. for the error.