Presented in 5-packs and singles. 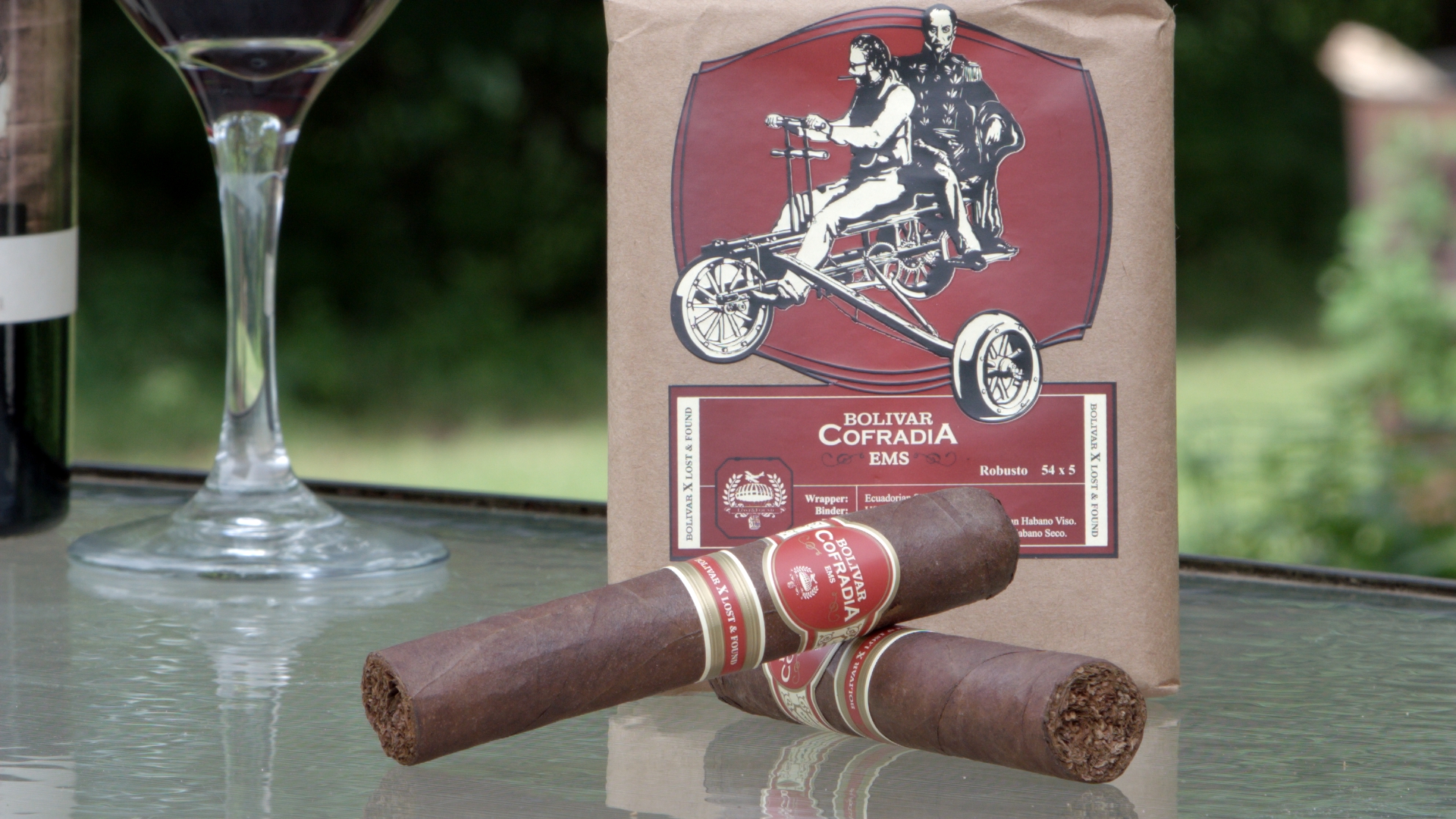 Last year, STG’s new business development manager, Justin Andrews, and Robert Caldwell of “The King is Dead” cigars fame, among numerous others, visited the historic HATSA cigar factory in Danlí, Honduras. During their visit Justin and Robert happened upon two bales of wrapper tobacco that sparked their interest. One bale was Connecticut Broadleaf, the other, Ecuador Sumatra. Both bales indicated that the tobaccos had been aged five to eight years. It was then decided that each wrapper would be used for two new blends, respectively, and the Bolivar Cofradia Lost & Found selection was born.

“I would have never imagined standing among a sea of bales at HATSA, knowing that any tobacco we wanted to blend with was available to Justin and me,” said Robert. “This collection represents the power of a strong collaboration.” 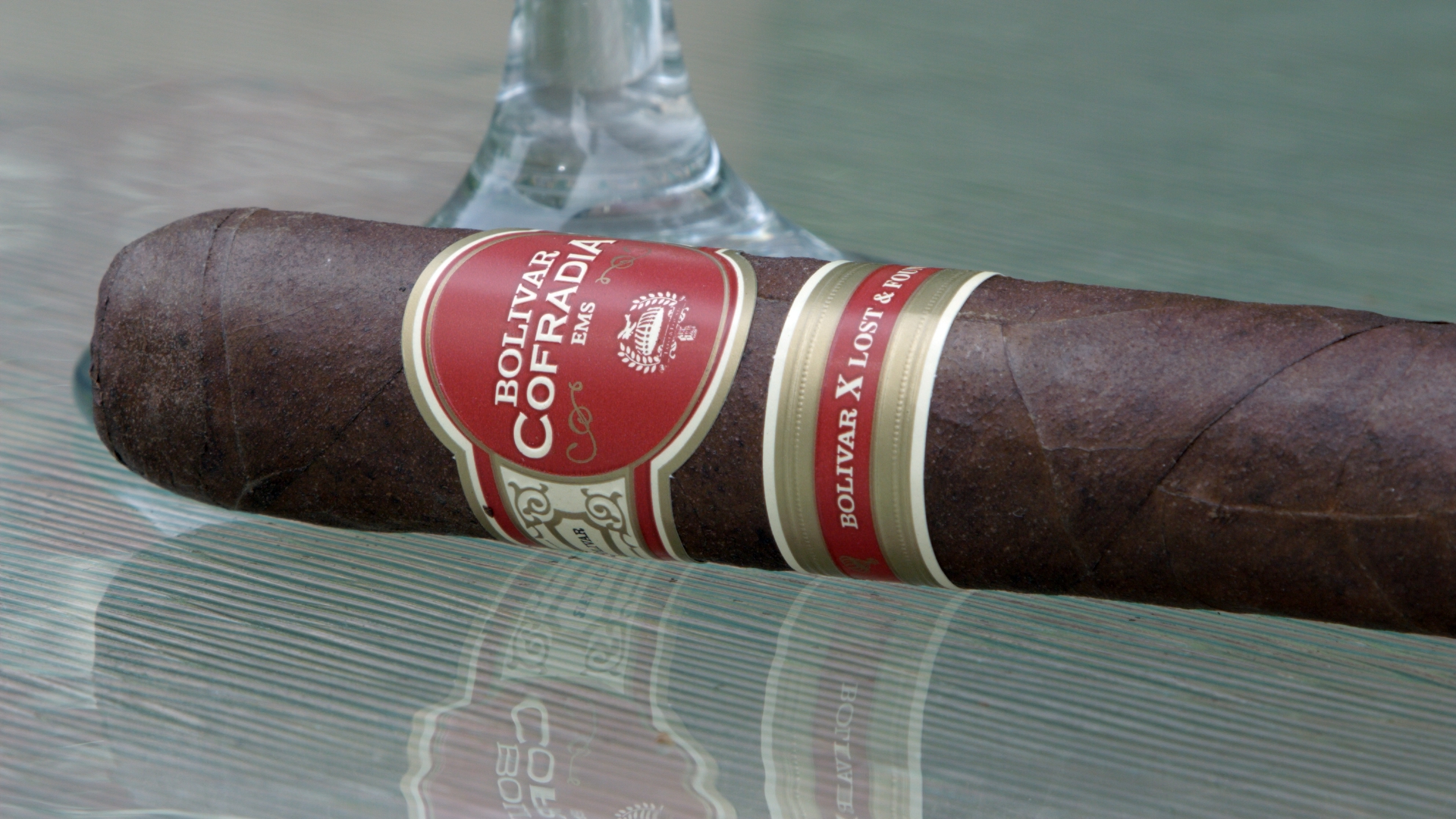 When it came to blending, the Bolivar Cofradia Lost & Found EMS (short for English Market Selection) would be rolled in the lighter Ecuador Sumatra wrapper while the practically black Connecticut Broadleaf would be used for the binder. In turn, Bolivar Lost & Found Oscuro would be rolled in the Connecticut Broadleaf and use the Ecuador Sumatra for the binder. However, both core blends would include Dominican, Honduran, and Nicaraguan fillers.

Construction: The cigar is well packed and neatly rolled. I found no soft spots along the cigar’s length. The cap on my sample was a little sloppy but it clipped well and issued an excellent draw.
Cold Draw: Tangy and very appealing. I thought it had a light orange peel flavor without the bitter peel taste.
Base flavors: Mostly earthy with notes of baking spices, tangy fruit, and molasses.
Aroma: Sharp.
Burn & Ash: Textbook. The burn was well paced and even revealing an almost white ash that was quite firm. The ashes fell in ¾-inch nuggets, on average. 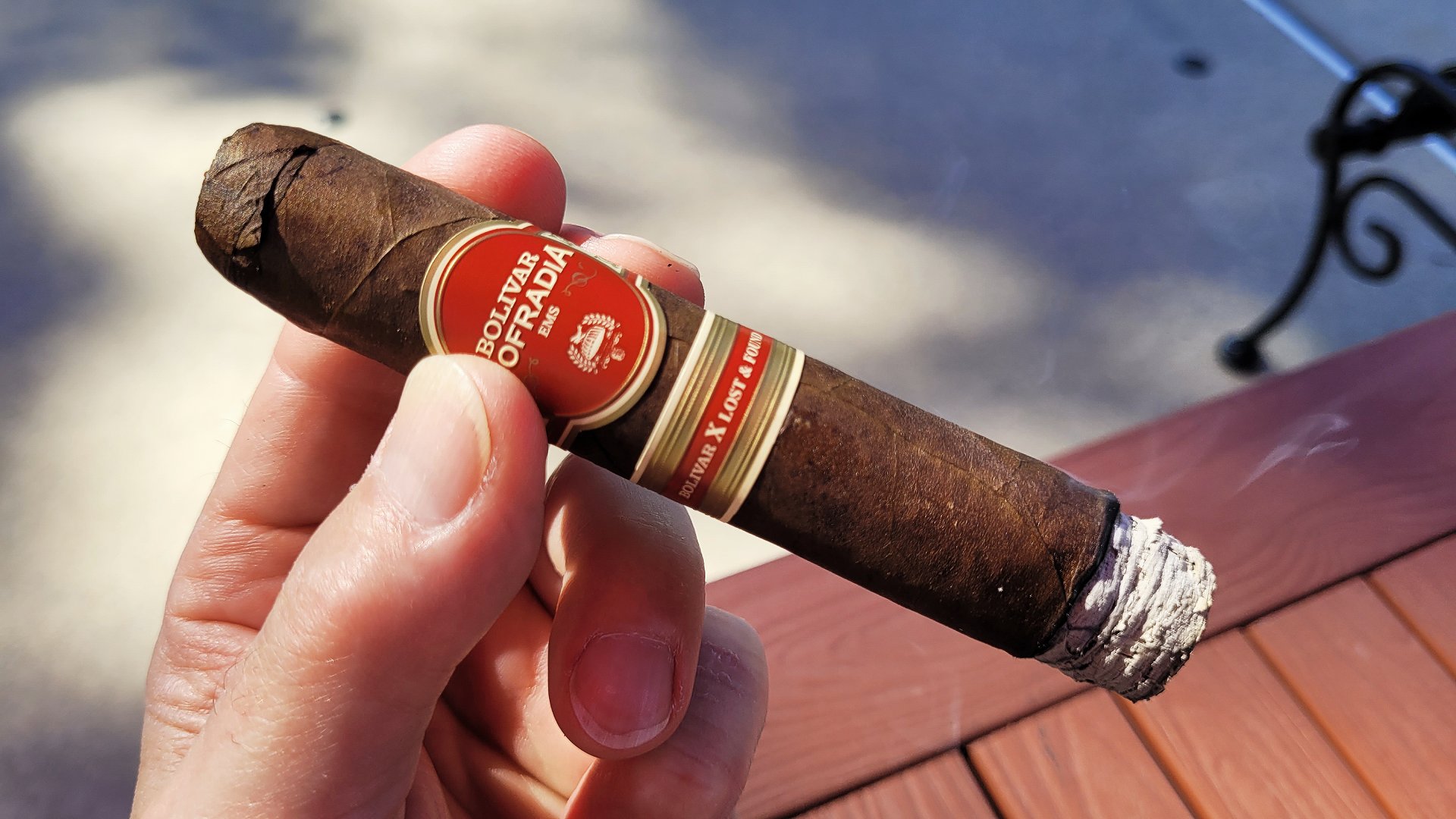 The cigar took the flame easily and issued some interesting opening notes. I thought I detected a hint of licorice upfront but it was too faint to fully define. Once the cigar got going, I picked up a tangy fruit flavor and a cereal like note which, combined, reminded me of a cranberry bran muffin. Unfortunately, it didn’t last long.

The burn got off to a very even start and revealed a sharp cone after each ash tap. The smoke was mostly medium in body and pretty smooth with some light spice on the finish. By the time the cigar reached the midsection I got balanced flavors of baking spices, tangy fruit and a bit of earth that was bubbling under. 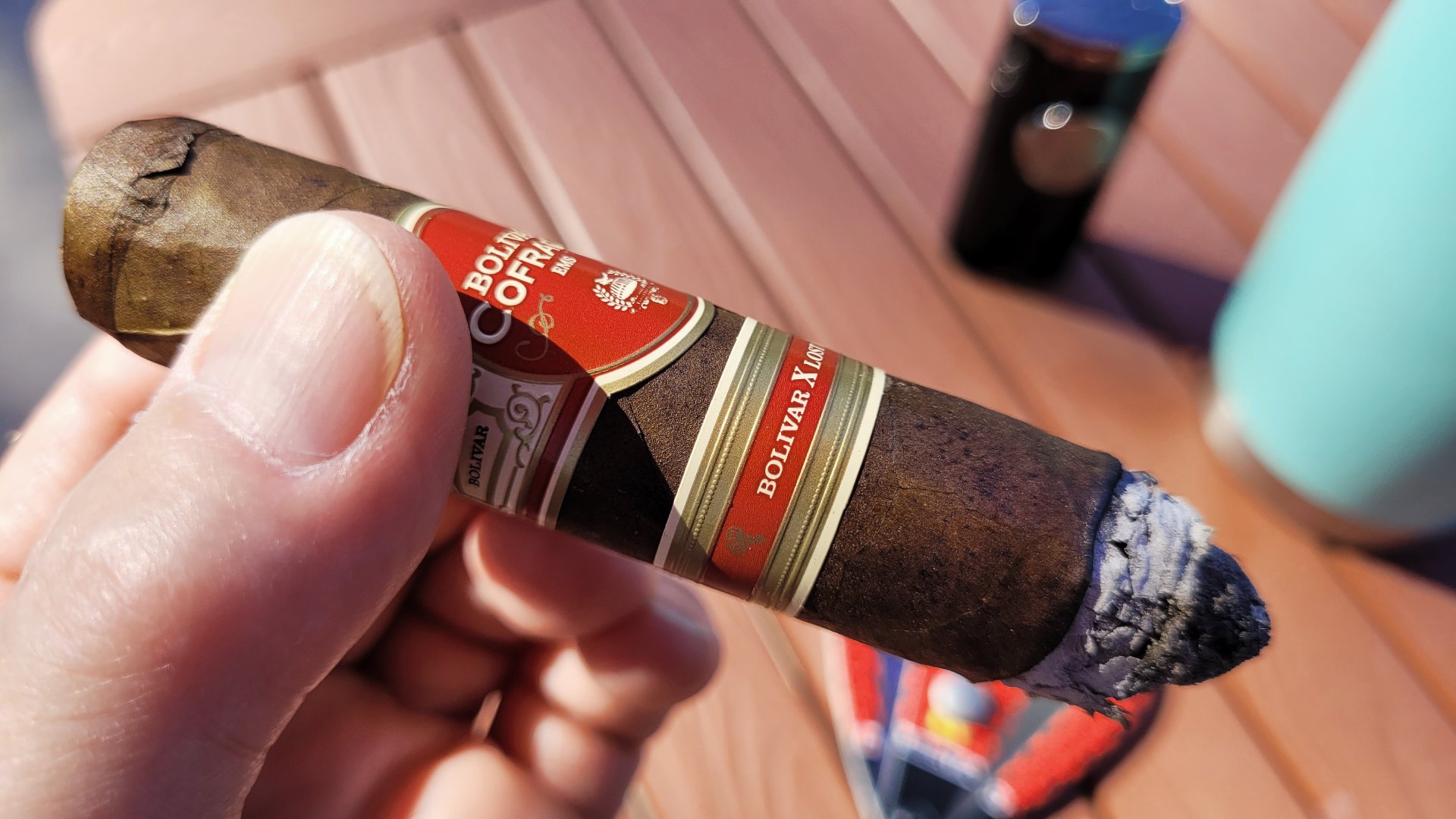 Some nice improvement in all aspects at this middle section. A molasses flavor appeared which gave the cigar a welcome sweetness while the earthiness rode shotgun. The cigar also continued to draw and burn in textbook form. However, as the cigar pushed toward the cusp of the final stage, the earthiness increased overtaking the molasses. The body was now more medium-full, but the strength remained medium. 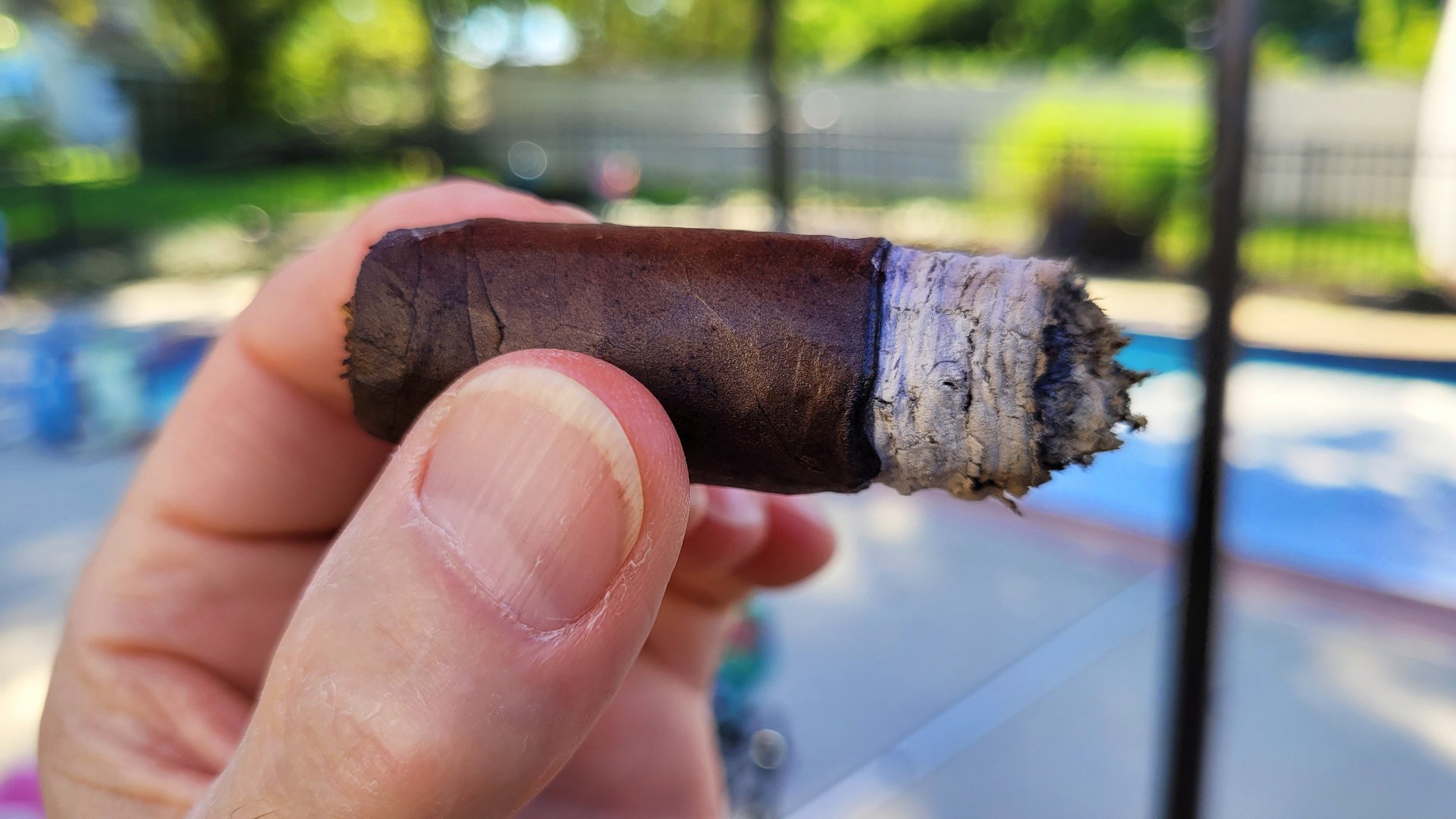 At this point some sweet notes began to claw their way out, but the earthy taste was still leading the pack. The body had now shifted to full but hadn’t increased in strength. The cigar had also turned a little bitter telling me that I may be hitting on it a little too much. More time between draws helped lighten that up a bit and surprisingly brought out a little more of the molasses. With that the cigar ended happily. 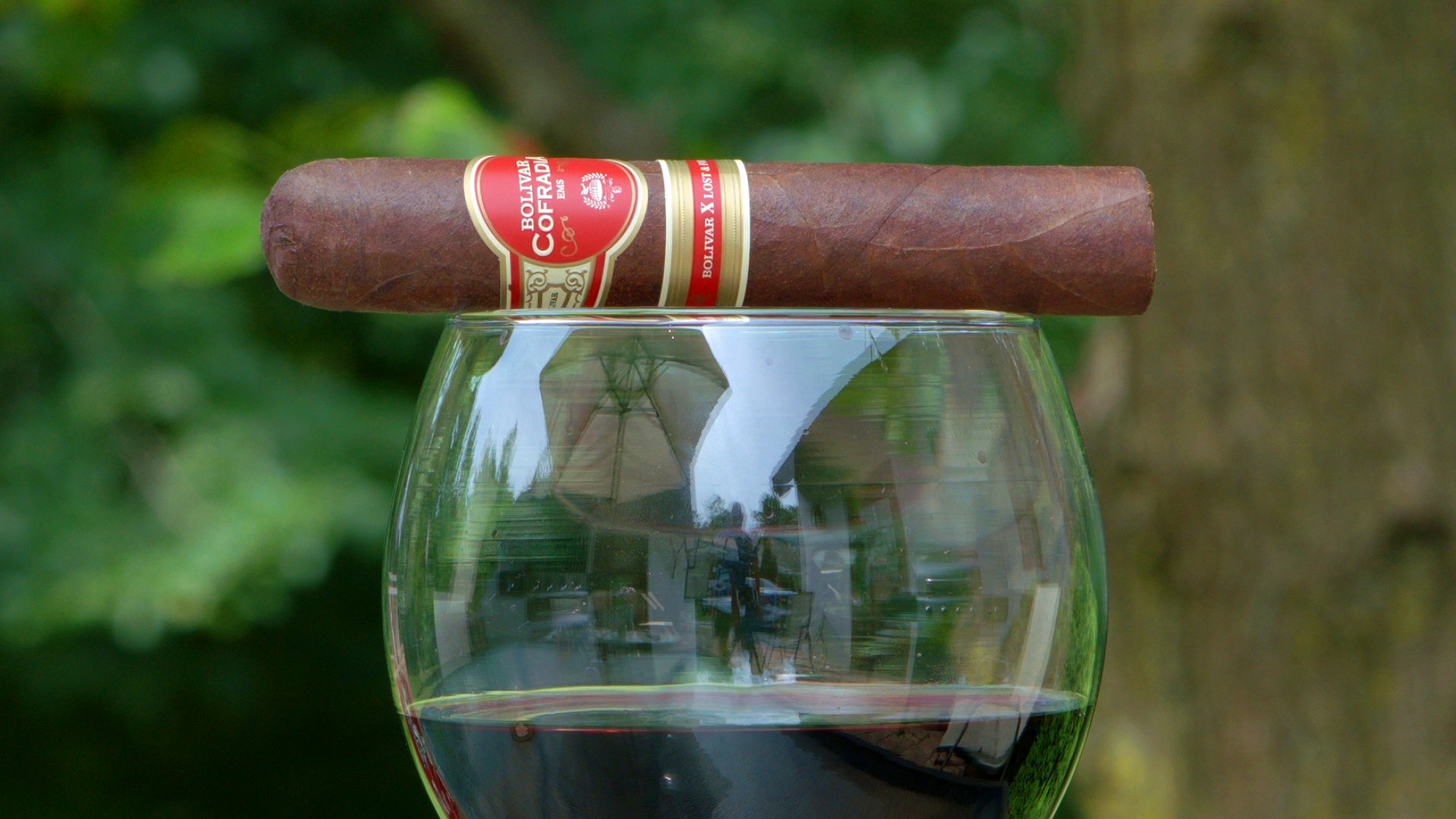 I think a gin & tonic, a mojito, or other mixed cocktails would go nicely with this cigar. Otherwise, you may want to consider a red wine like a Cabernet, or maybe even a Rosé. For more combinations, see our Cigar & Spirit pairing guide or Wine pairing guide. 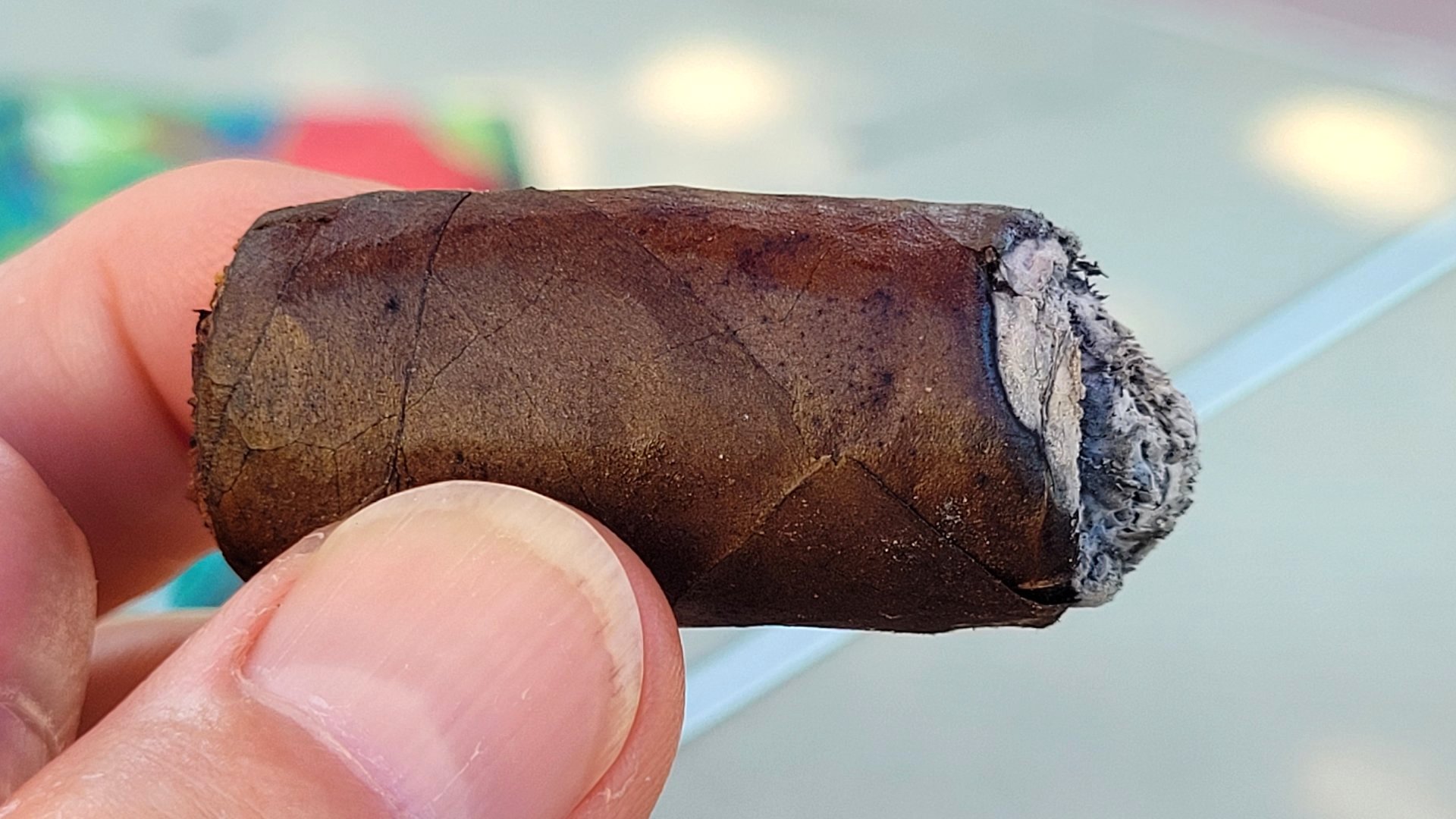 I was a little puzzled by this robusto, mainly because I wasn’t sure if it was supposed to be more complex or simply a good-natured anytime smoke with a lean set of flavors. I didn’t expect it to be as earthy as it turned out, but the tangy fruit, molasses and baking spices held my interest. Based on my experience, the quality of the cigar, and its affordable price, I’m going with good-natured, anytime smoke, which makes it accessible to cigar smokers at every level. That said, based on having smoked two Cofradia Lost & Found EMS Robustos, the second cigar (seen in the video), impressed me as being a little more complex than the first. Suffice it to say, I felt a little lost at first, but I found the cigar to be worth picking up and deciding for yourself.

Reading Time: 6 minutes Cigarillos – the grandkids of big cigars, and still as popular as ever. Take a virtual tour of the 10 bestselling cigar tins, get their flavor profiles, learn how to store them, and why they’re worth keeping on-hand.