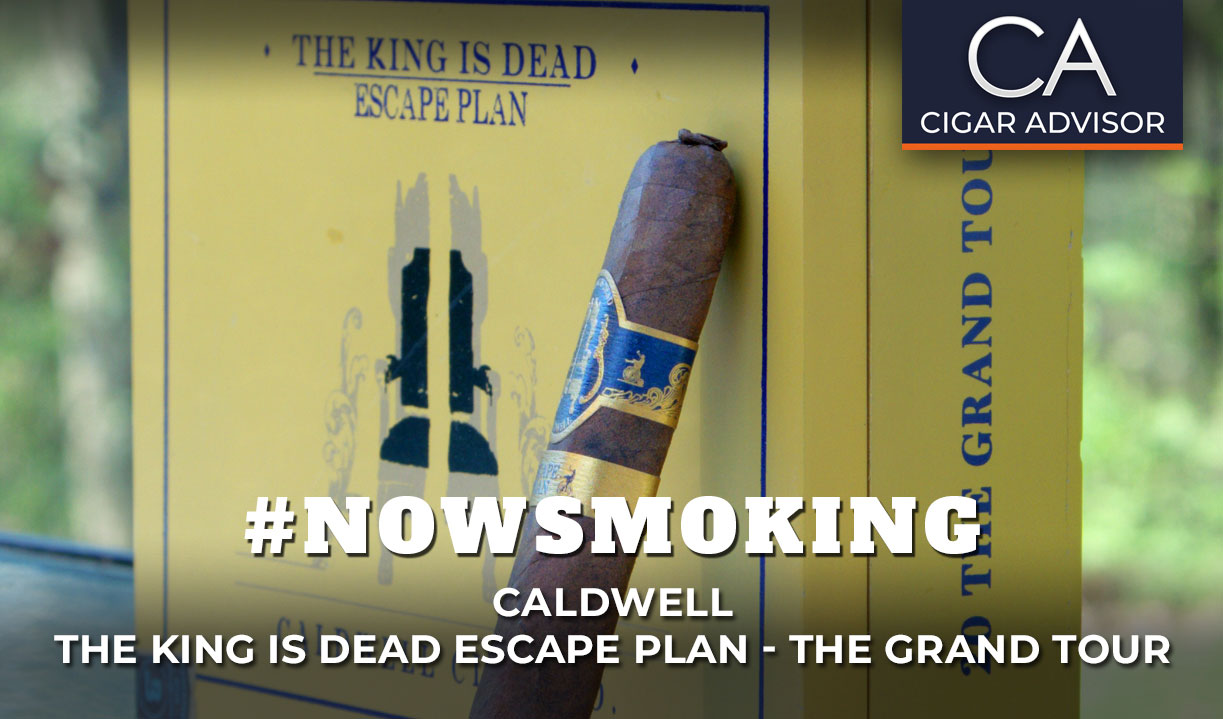 The King Is Dead Escape Plan The Grand Tour Back Story

Earlier this year, Caldwell Cigars released a new blend for their The King is Dead Escape Plan. This model is a box-pressed version of the King is Dead with a modified blend that features a Mexican San Andres wrapper, Dominican binder, and Dominican, Nicaraguan, and Peruvian fillers. Please note that some websites have the wrapper as “Dominican Negrito Mejorado,” which is the original Escape Plan wrapper, so it can be a little confusing. The Escape Plan will be a regular production cigar released annually in four sizes but in a limited run. For this current edition, only 300 boxes per-size were made. 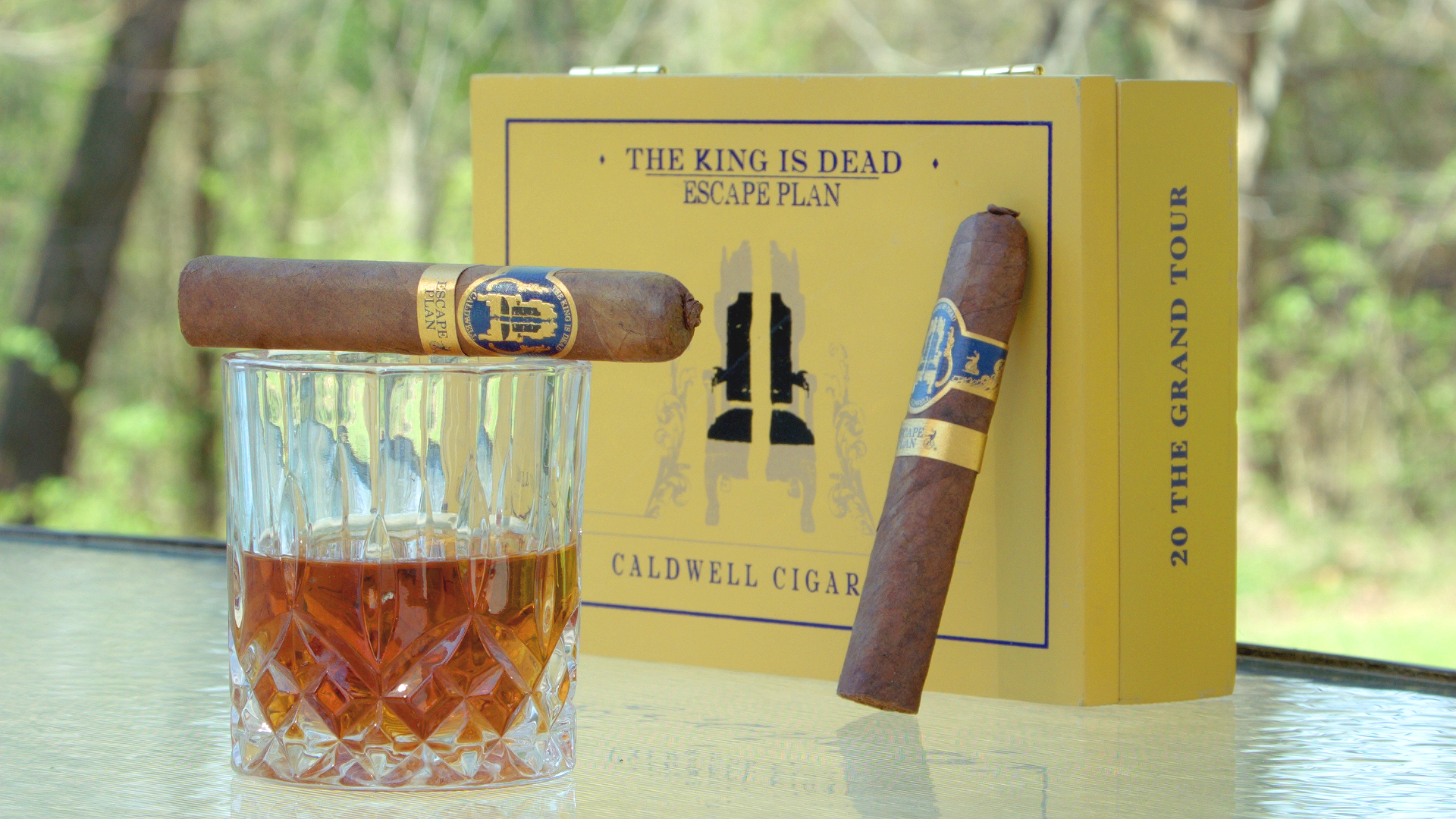 Construction: A lighter brown wrapper with some subtle mottled areas, but overall, a neat-looking wrapper. Its lighter color also suggested that it was a Mexican San Andrés natural wrapper. The box pressing is well done with rounded corners. I found no soft spots along the cigar’s length and the cap is finished with a little man bun knot at the top. For my sample I twisted off the knot and then decided to punch it due to the small opening. For the cigar I smoked on the video, I used a double blade cutter. In both cases, the draw was just right.
Cold Draw: Leathery.
Base flavors: Woody, nutty, peppery.
Aroma: Sharp.
Burn & Ash: Excellent. The burn was even throughout revealing a very firm white ash. 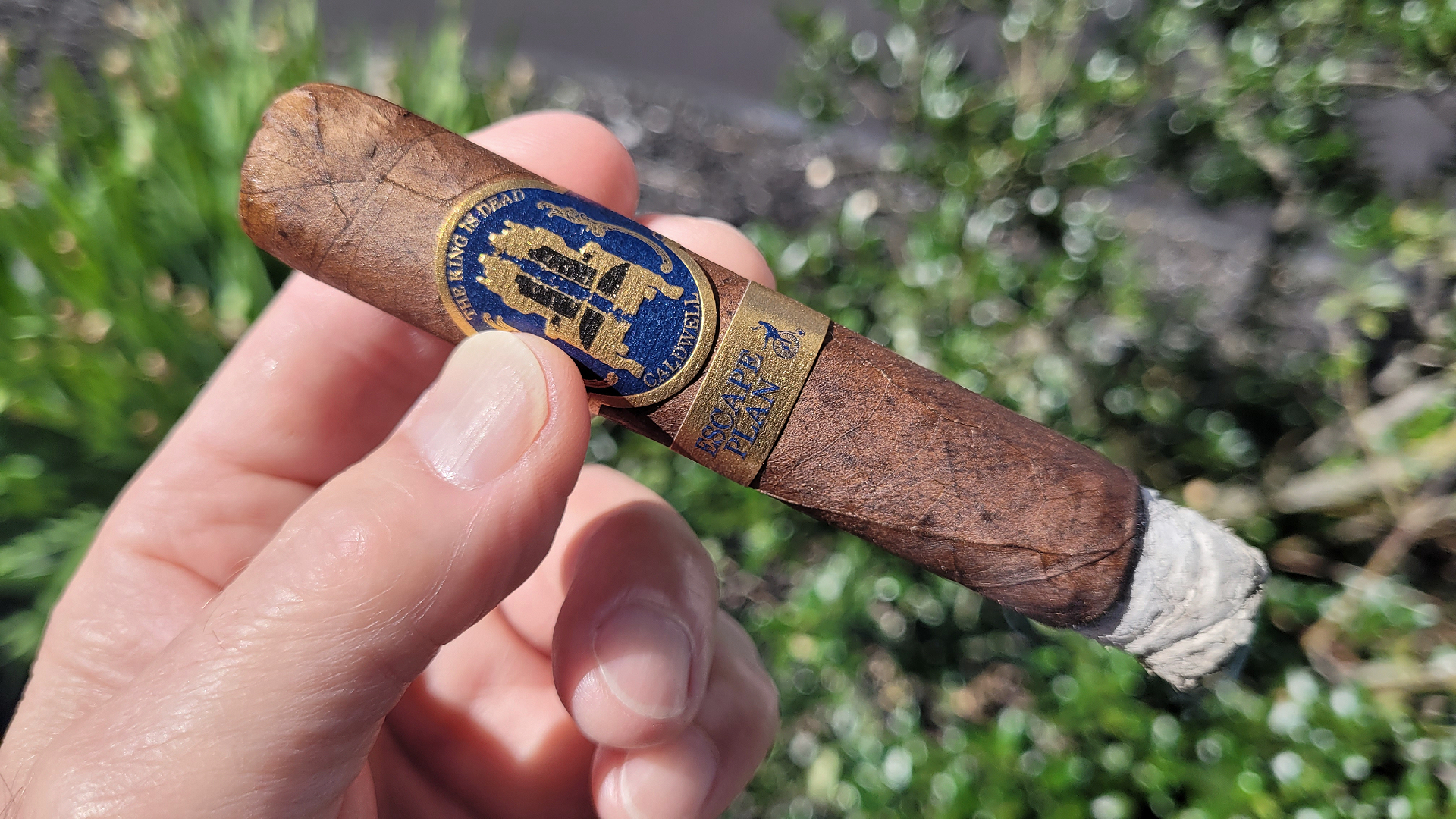 The smoke starts out pretty mellow with mostly peppery and earthy opening flavors. The smoke gets creamier, more dense in volume, and the pepper settles down a little leaving a mostly cedary taste with a peppery finish. Shortly afterwards, some sweet tobacco notes creep in. This section winds up mostly woody, nutty, and peppery with a medium body and strength. 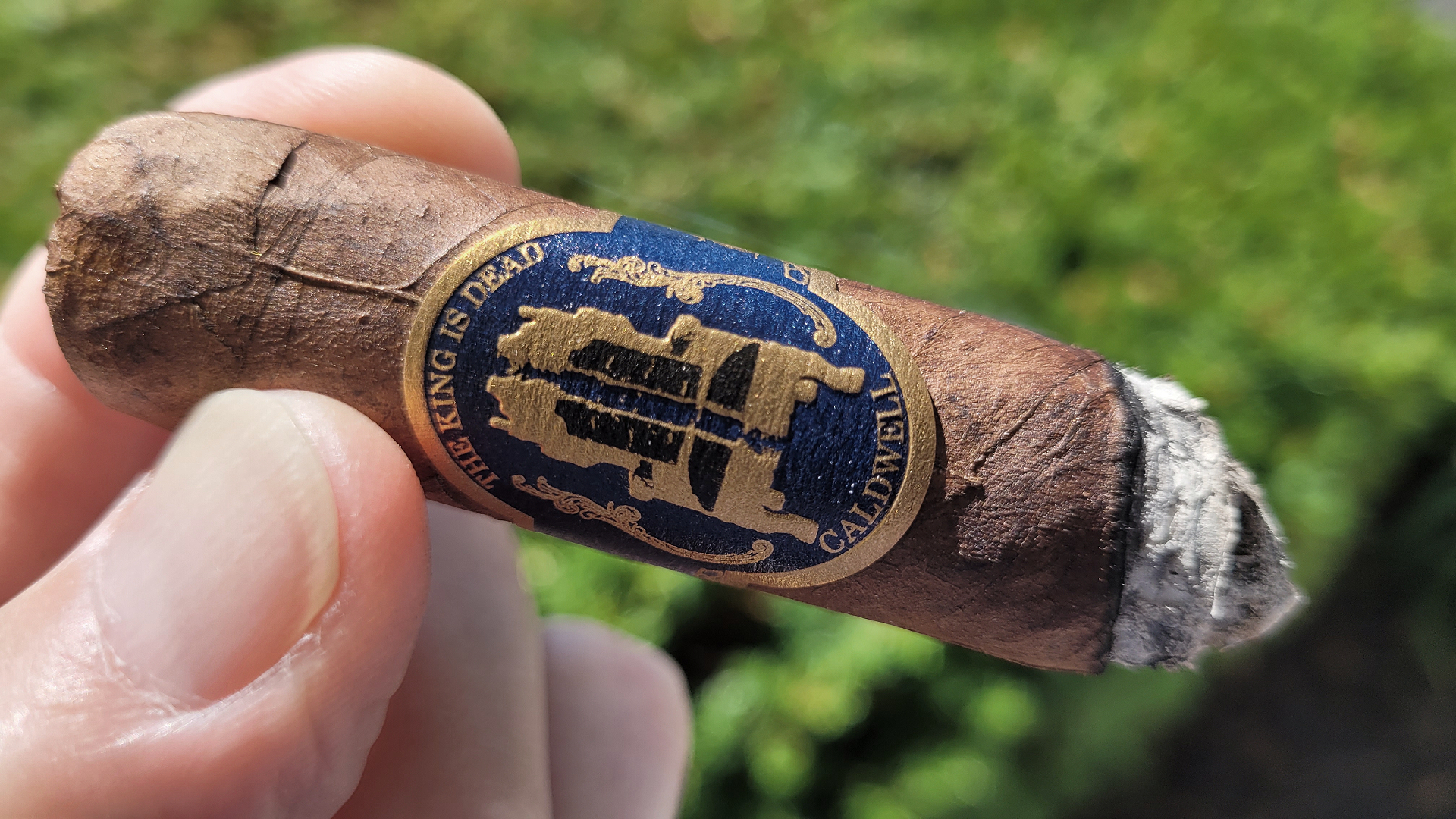 The cedary flavor is a little more in focus while the smoke remains medium in body and strength and well balanced. Some earthier notes return and an occasional splash of nuts. Moreover, the fact that the finish continues to offer a modicum of pepper tells me that the wrapper may actually be Mexican San Andrés. Regardless, the cigar has been performing quite well. 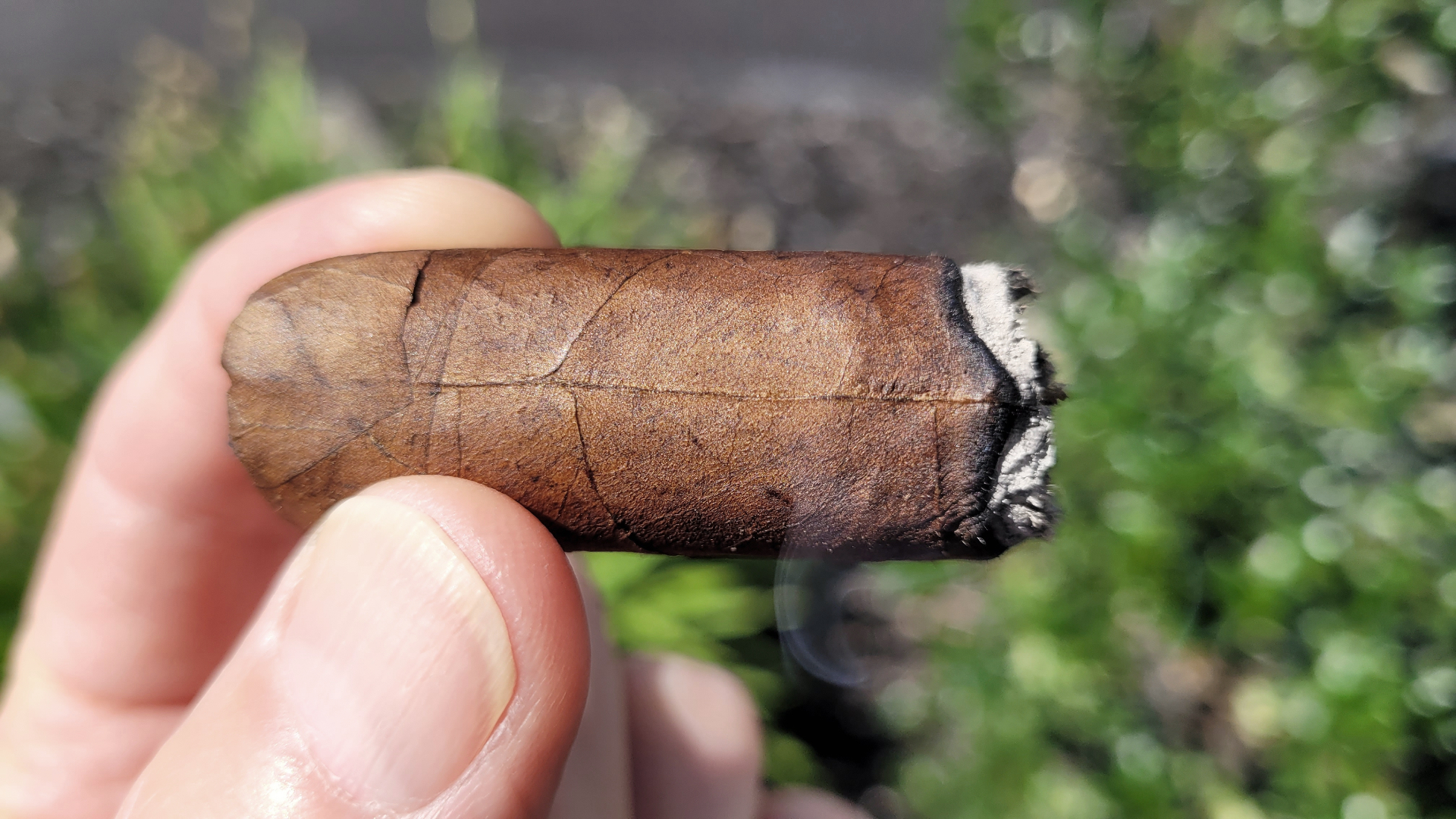 One of the most impressive things about this cigar is the construction and burn. (Even my pre-review sample held up on a very breezy day.) Up to this point, the smoke has been quite dense, very smooth, and the body and strength have remained unchanged. Flavor-wise, even down to the nub stage the cigar is still cedary, earthy, and spicy with a hint of sweetness that took me a long way down Nub Street.

What beverage pairs well with The King Is Dead Escape Plan The Grand Tour Cigar?

If you prefer a little more sweetness with your pairing go with a sweeter bourbon or rum. This cigar would also go well with some clearer summery cocktails like a gin & tonic or vodka & cranberry.

Is The King Is Dead Escape Plan The Grand Tour cigar worth smoking? 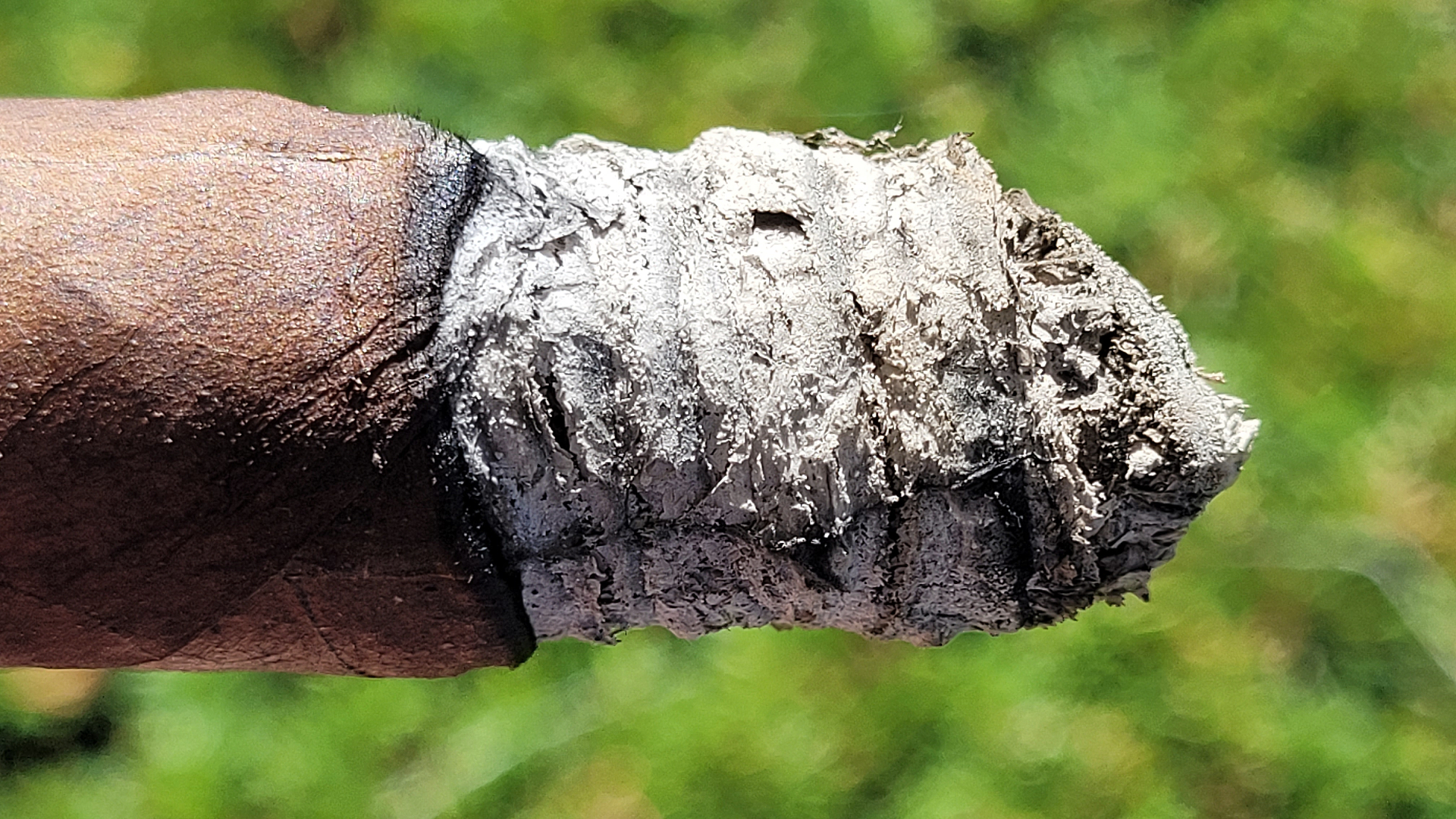 I think so, and The Gran Tour’s overall performance should attract cigar smokers other than Caldwell’s dedicated base. In terms of burn, comfort in the hand, the pressing, balance of flavors, all that, the cigar was outstanding. As to the flavor profile, I was expecting something a little more complex, especially with the variety of tobaccos they used. The cigar was primarily cedary, peppery, and earthy with some occasional hints of nuts and sweet tobacco popping-in along the way. Its medium body should make The Grand Tour pretty accessible to just about all experiences and I can envision it as an everyday smoke, but it does run a little high in price. Suffice it to say, The Grand Tour should be worth taking for the more adventurous cigar smoker.

Will add to my try list. Any thoughts on Tim Ozgener return to the cigar industry?

I have not seen this one yet, but have smoked many Caldwell cigars over the years. I would say that Caldwell is one of my favorite brands and I always have some on hand. Construction is close to flawless and always good flavor. Hope to run into one of these. Thanks for the review.

Reading Time: 7 minutes The Cigar Playlist returns to pair music and cigars: get our next three songs and cigars, along with a bonus pairing pick from industry legend, Ernesto-Perez Carrillo. Hear how well they play together- listen along and read the full article now!