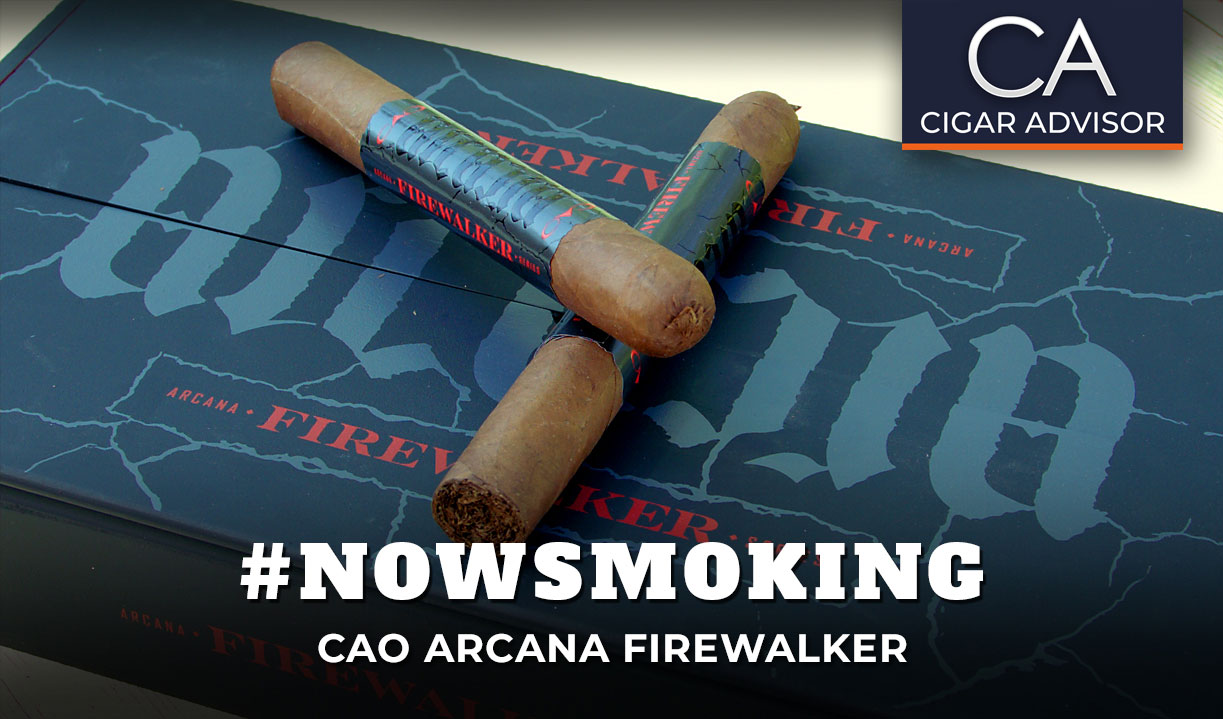 The CAO Arcana Firewalker Back Story 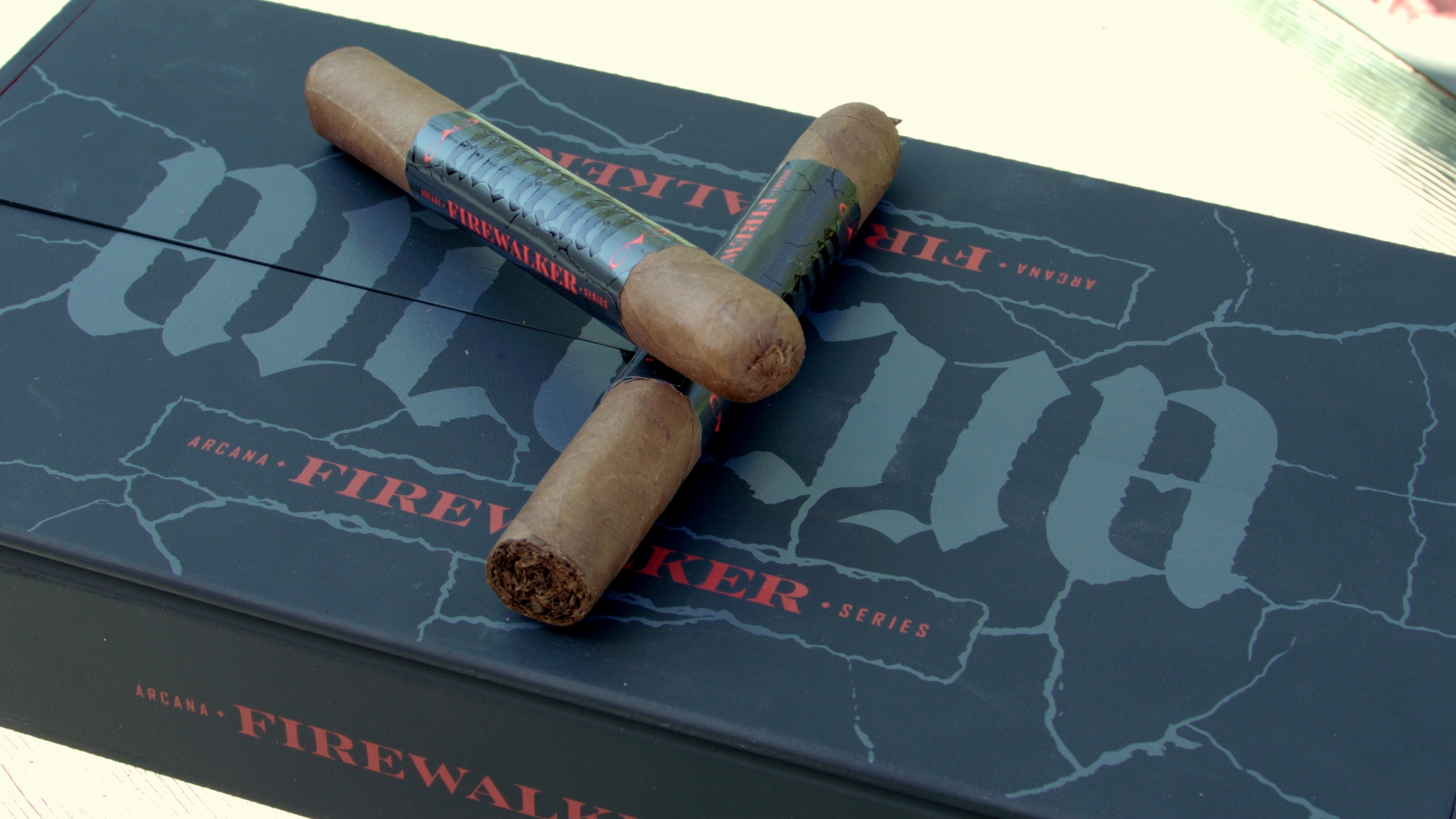 The CAO Arcana Firewalker follows last year’s CAO Arcana Mortal Coil, which was very well received. That cigar utilized a very old and unique Dominican method of fermentation called Andullo. Released in limited edition and in just one size, the CAO Arcana Firewalker uses a Nicaraguan aging method called Chincagre. Chincagre requires placing the fillers in a pilón that is buried deep in the volcanic soil of Masatepe. This allows the tobacco to age slowly locking in the natural sweetness and aroma of the leaves. Two months later, it gets nine more months of aging in the factory. For this Firewalker release only 5,000 boxes were made, all of which are reserved solely for sale in the U.S. 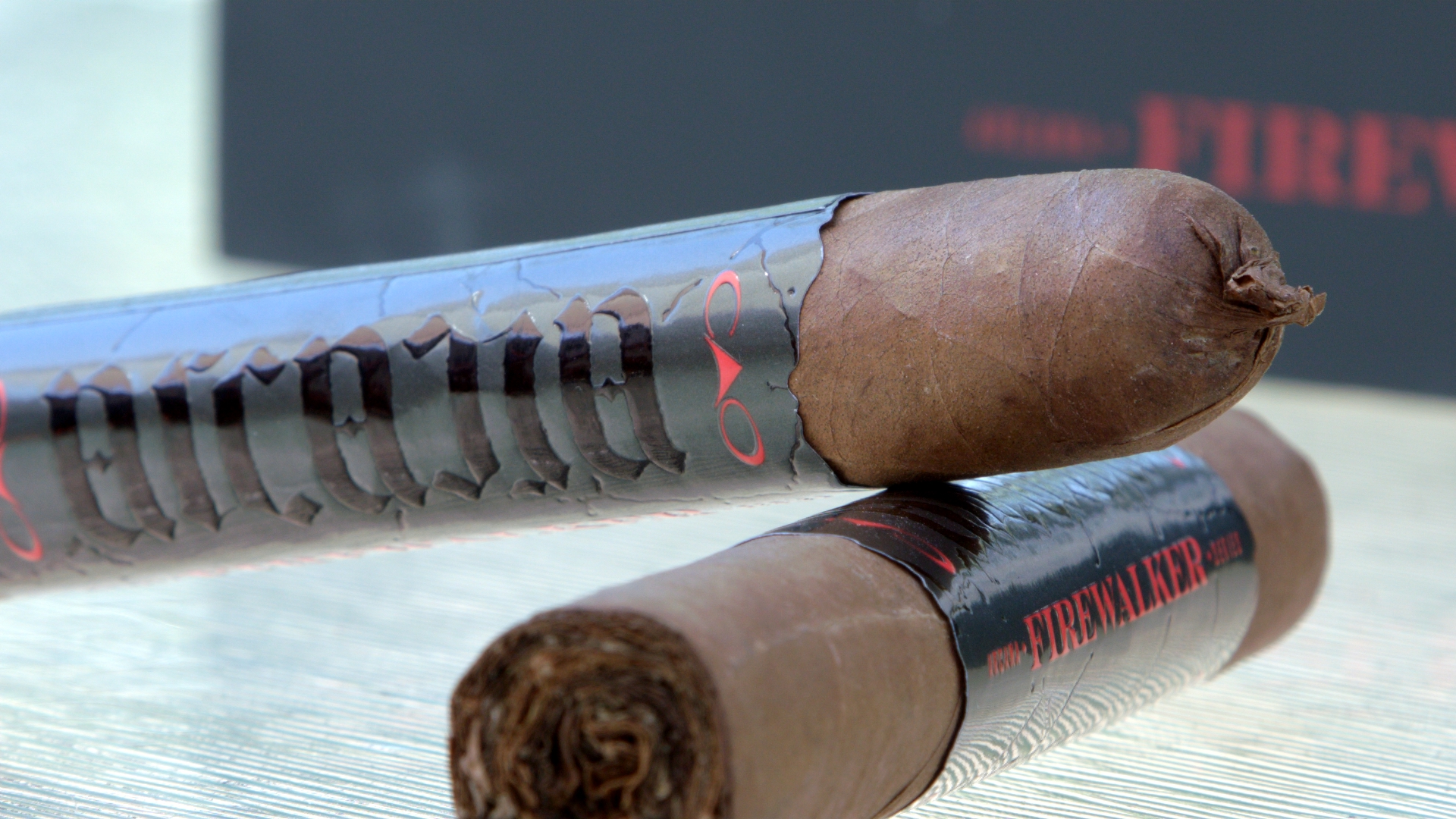 Construction: The cigar is well-packed and has some weight in the hand; very solid. Under the band, which takes up almost 80% of the cigar, is an attractive Rosado wrapper with a bronze patina. I like the little tail on the cap, which tears off easily and reveals a pretty good draw. In both my samples I could see how well they placed the dark tobaccos so perfectly in the center of the roll, often hard to see from the head (see the photo below).
Cold Draw: A combination of fennel seed and leather.
Base flavors: Sweet, earthy, nutty, spicy (brown sugar, leather, toasted almonds, cinnamon).
Aroma: Sweet (as confirmed by my girlfriend).
Burn & Ash: Textbook, with long very firm, limestone-colored ashes. 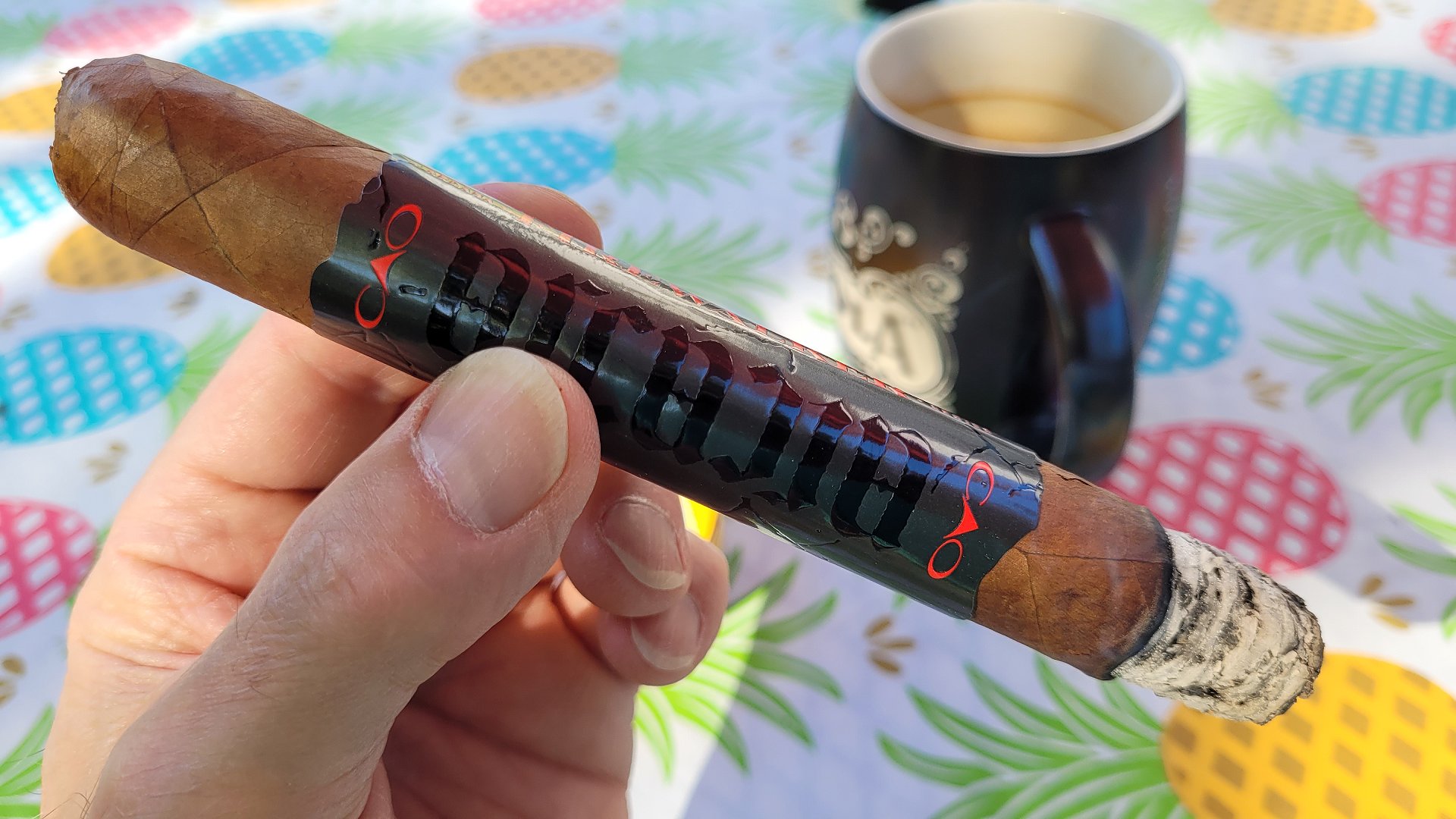 Once lit, the first flavor notes out of the gate are a brown sugar sweetness, some leatheriness and a cinnamon-like spice on the finish. The smoke itself was very smooth on the palate and somewhere between mellow and medium in body. Once I was forced to remove the billboard-size band (you may opt to remove it before lighting), some toasted almonds-like nuttiness entered the mix. At this stage, taken altogether, the flavors were well-balanced, too, so I gave high marks to the first couple of inches. 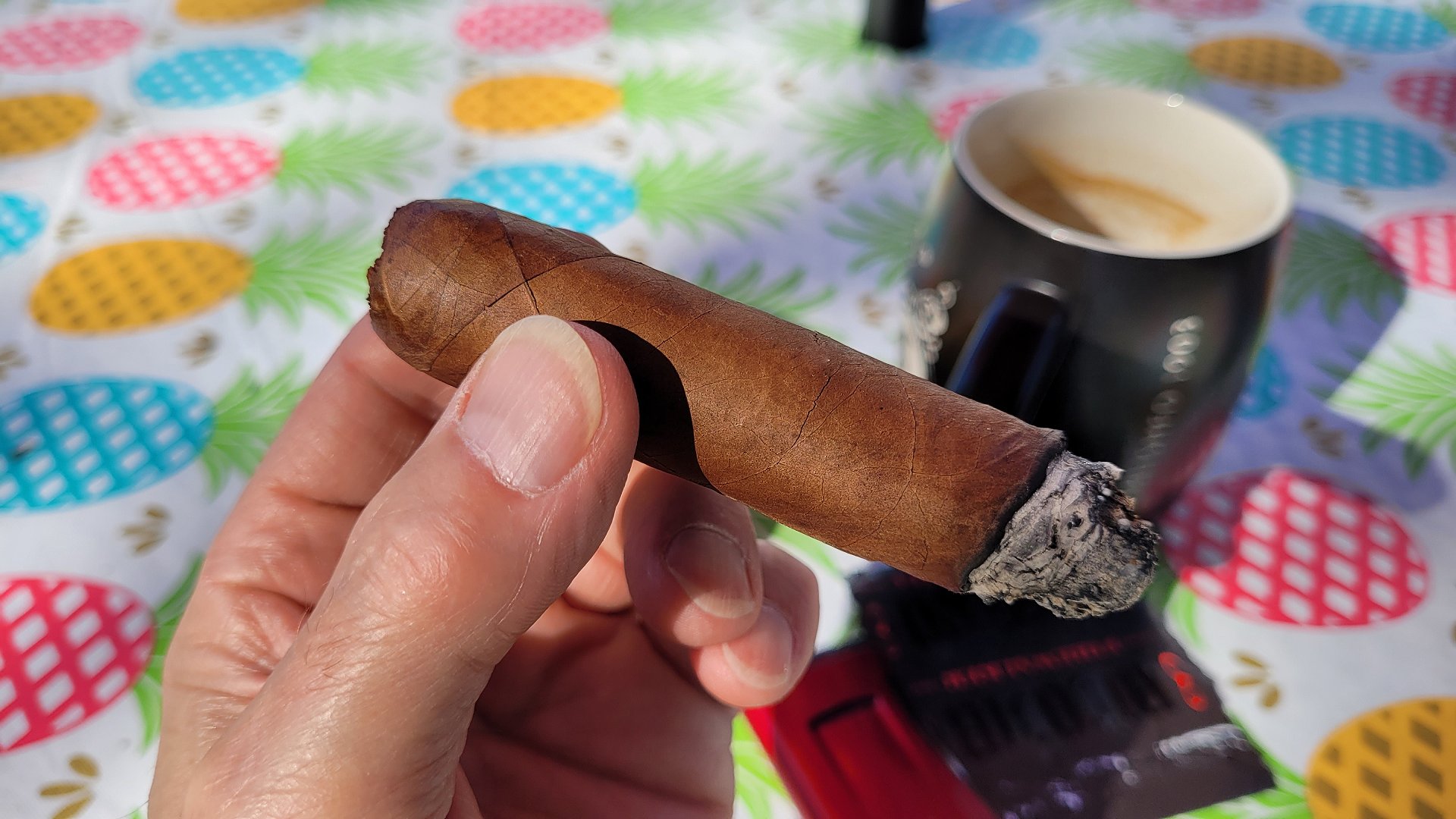 As I approached the proverbial sweet spot, I couldn’t help noticing that the burn and ash were about as good as it gets. At this point the smoke volume and body have also intensified giving it a dense chewiness. It was still sweet, nutty, and leathery, but shortly before the cigar began to cross into the final inches, the cinnamon spice was sharper on the finish and the body was medium plus. 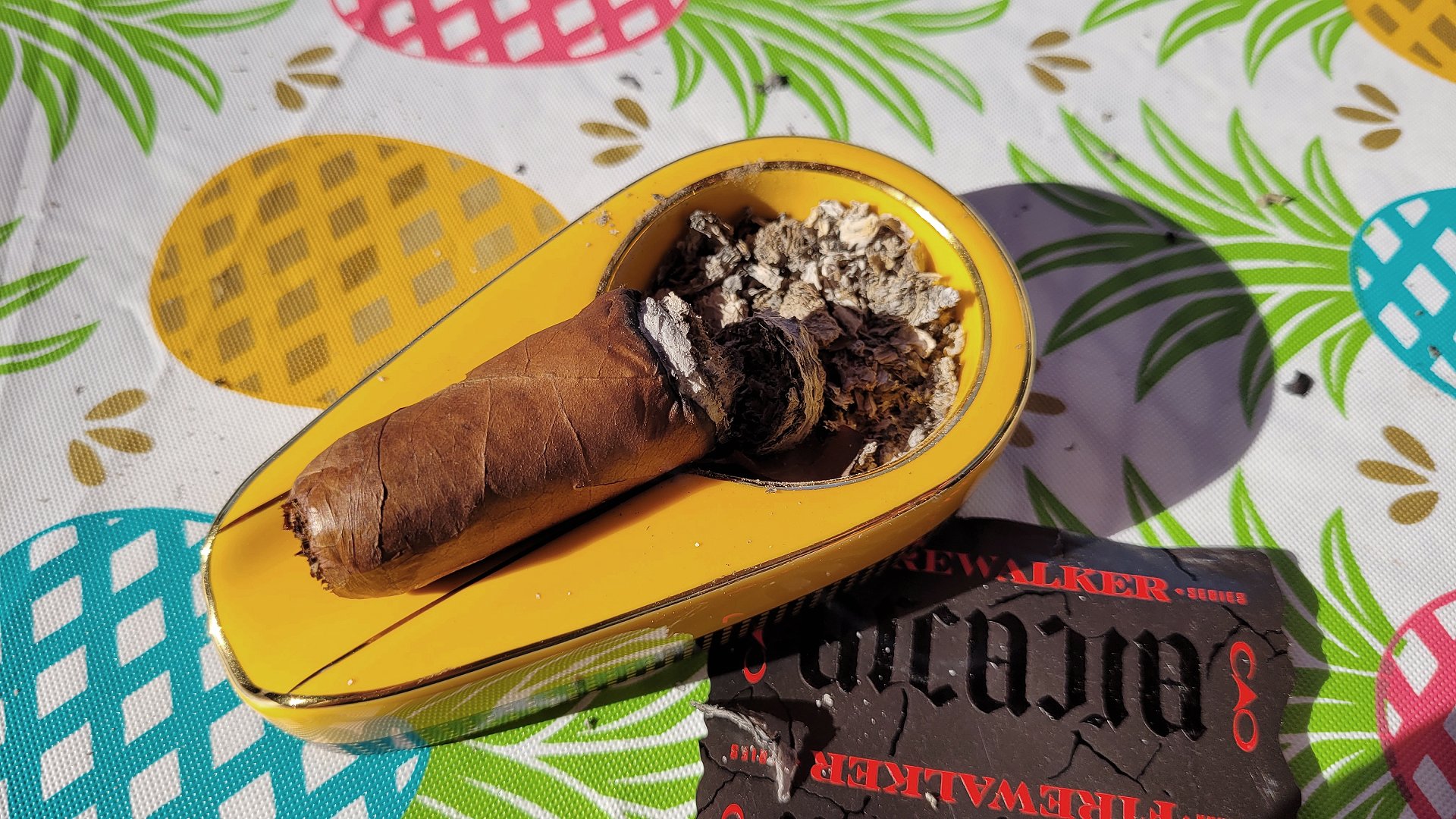 Pretty much a continuation of Act II. The spice has increased, but there’s a little less sweetness, while the leather and some nuttiness remain. Then the cigar did a 180. With about two-and-a-half inches left the flavors started to taste a little bitter. I considered putting it down when nuances of brown sugar and toasted almonds returned. A few more good puffs and I put it down on a high note.

What whiskey pairs well with the CAO Arcana Firewalker? 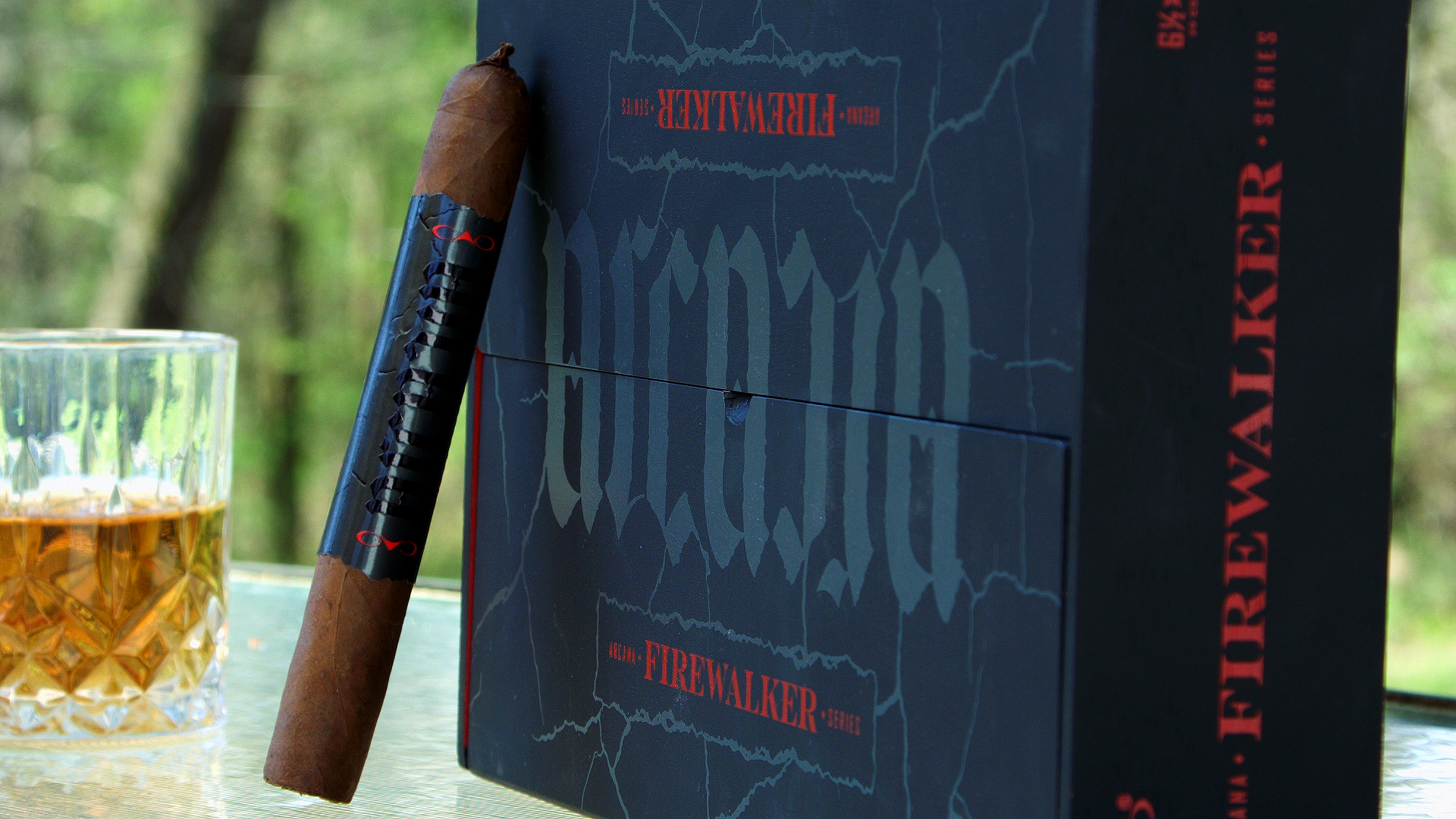 I would go with a dark premium rum like Flor de Caña 12 Year to bring out more of the leather, nuts and cinnamon flavors in the smoke. A smooth, not-too-sweet Bourbon would do nicely, too. For more combinations, see our Cigar & Spirit pairing guide.

Is the CAO Arcana Firewalker cigar worth smoking?

The CAO Arcana Firewalker is a very big cigar with plenty of depth. It’s got a fair amount of dark, spicy notes, but less so than its Mortal Coil predecessor. In this blend it’s the sweetness and aroma that really shine. Taking the Chincagre aging process into account, one of the things that makes Arcana Firewalker unique is that you get to experience Nicaraguan tobacco on an entirely new level.

Newly initiated cigar smokers may want to pass on Firewalker, for now. Reason being, I think more experienced cigar smokers who like Nicaraguans from Diesel, Black Label Trading Co., Foundation, the more boutique-y type brands, will more likely be drawn to this cigar. Then there’s the price which, taking my own experience into consideration, I felt was justified.