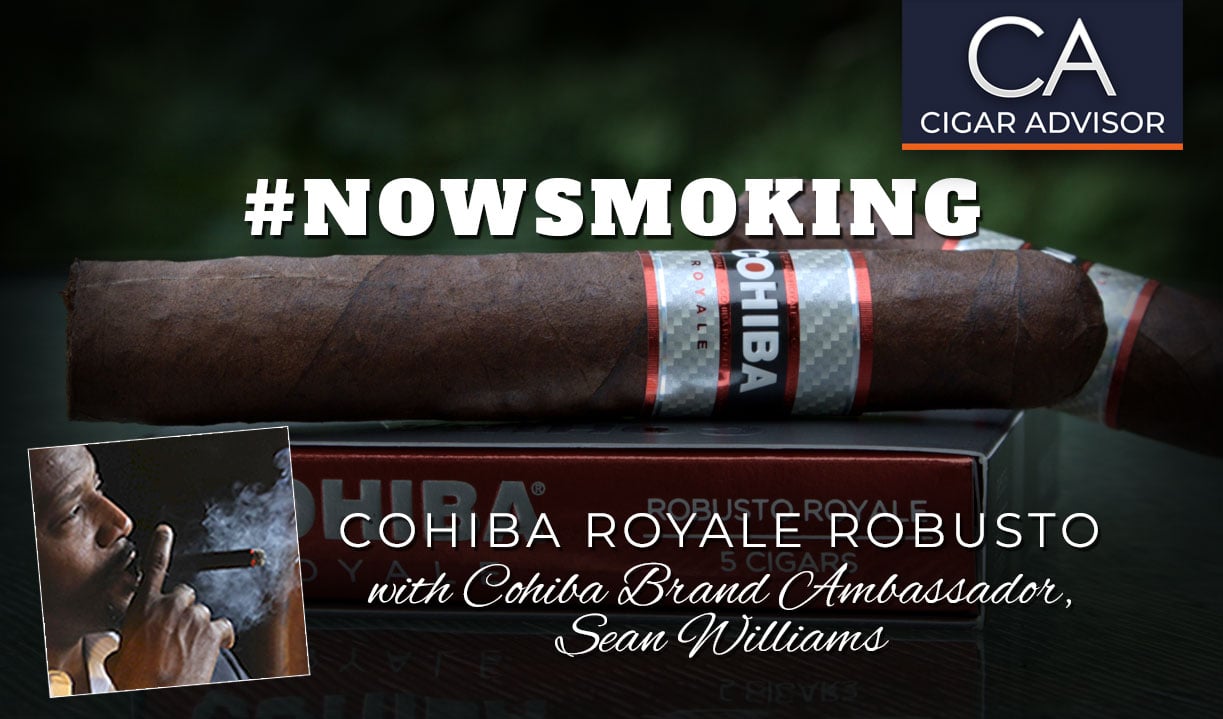 With the release of the Cohiba Royale cigars selection in April of 2020, the world-renowned marca hit two distinctive milestones. It’s not only the brand’s fullest-bodied blend to-date, but this is the first Cohiba Red Dot selection made in Honduras.

Cohiba Brand Ambassador Sean Williams said, “Cohiba Royale was created with the cigar connoisseur in mind. All of the tobaccos are hand-selected and deeply aged, representing the best-of-the-best tobacco growing regions in the world. The result is a cigar that is as bold as it is refined, befitting of the Cohiba name.”

The blend starts with an opulent, sun-grown wrapper from Nicaragua’s Jalapa Valley. Belowdecks sits a Dominican Piloto Cubano binder that frames long-fillers from Honduras’s Jamastran Valley along with Nicaraguan Jalapa and Estelí tobaccos. Additionally, every leaf in the blend has undergone intensive aging from five to six years.

As noted, Cohiba Royale is handcrafted at General Cigar’s HATSA factory in Danli, Honduras, as a full-production series in the following sizes:

Cohiba Royale cigars are presented in humidor-style boxes of 10, and packs of 5. 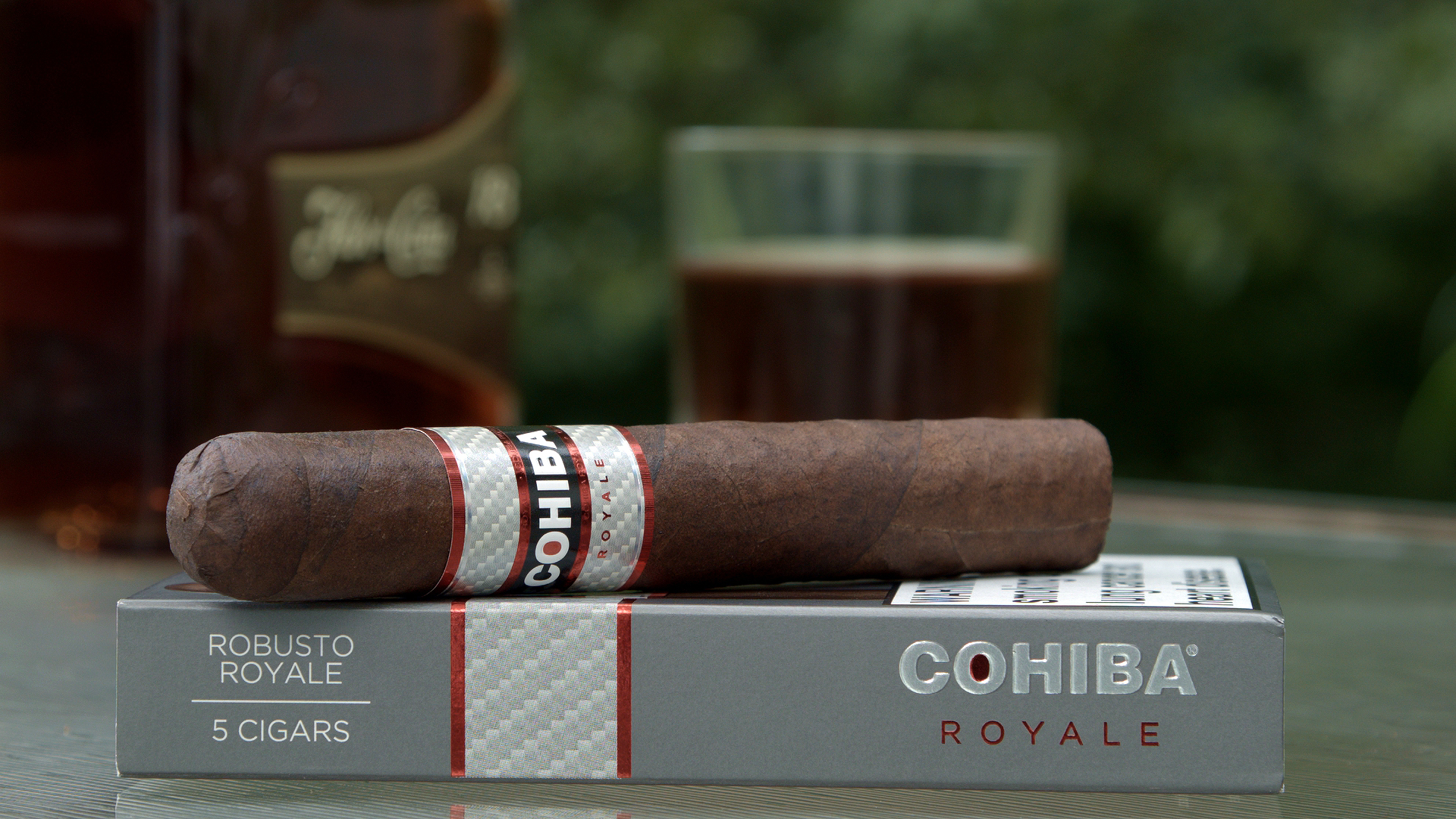 About as good as it gets. My cigar was perfectly packed with a nice feel in the hand. (There’s a lotta tobacco in there, folks.) With its oily patina and a glint of red that reflects off its skin, the wrapper is gorgeous and temptingly mouthwatering. Inspecting the foot of the cigar, the tobaccos are coiled in the Cuban-style entubar rolling method, which yields a more even draw. And to that point, the triple seam cap cut easily offering a perfect draw with cold notes of leather and spice. 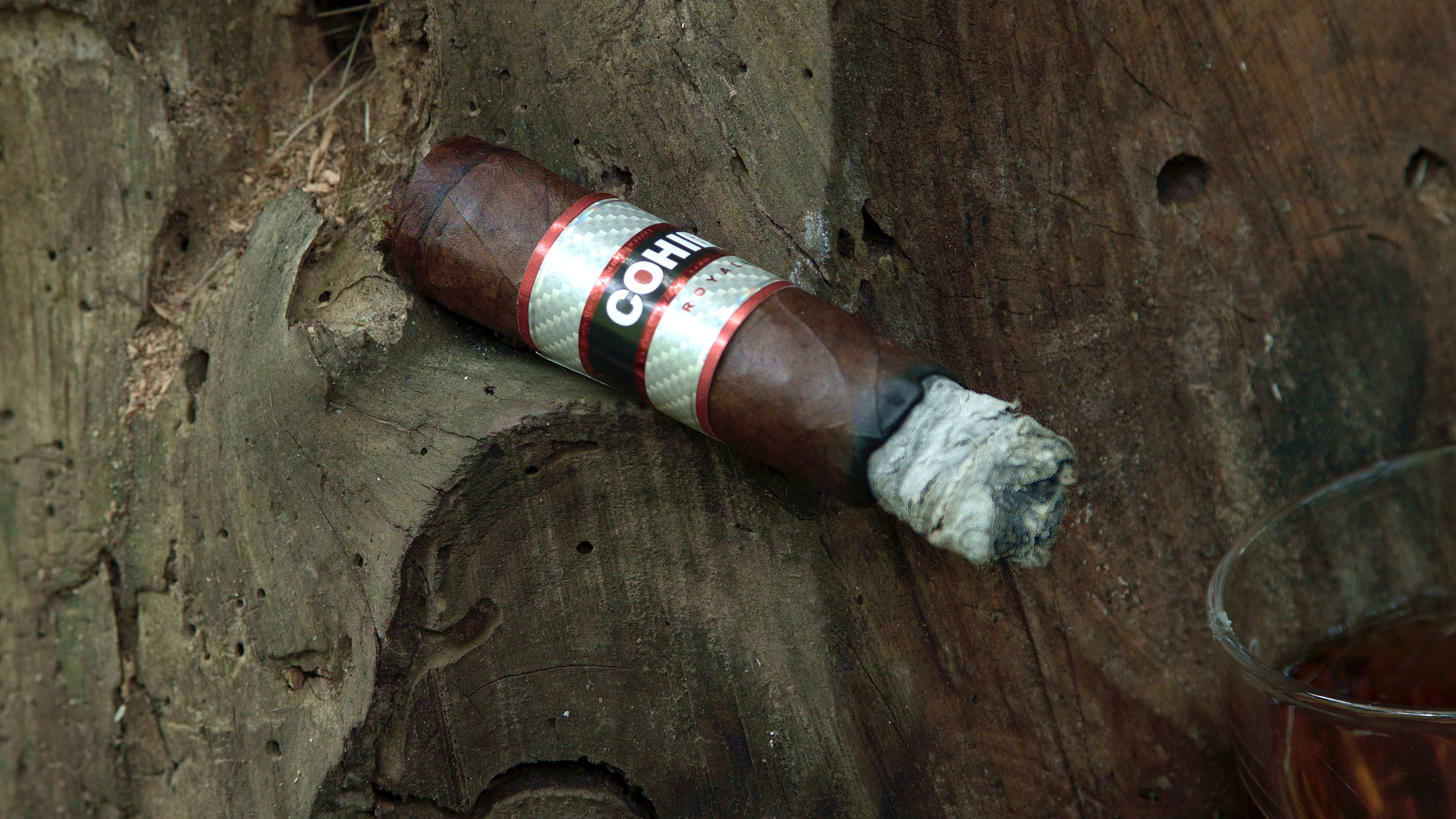 The initial flavors were leathery along with some earth and some bright, peppery notes. The pepper rounded-out by the 3/4-inch mark, or the point at which the first ash dropped. Leaping out of the gate, the smoke was very smooth, coating the palate with a base layer of earth, leather, and sweet spice. Sean seemed to get even more pepper via retrohales. More flavors, including a happy cedar note, entered the mix by the end of the first act. I was also impressed with the even burn and a sweet, floral-like fragrance coming off the wrapper. But the most impressive thing for me was how this full-bodied cigar was far from strong. I would attribute that to the long-aging of the leaves, for sure. Although it did transition to a noticeably heartier smoke in the final third, somehow it stayed the course. 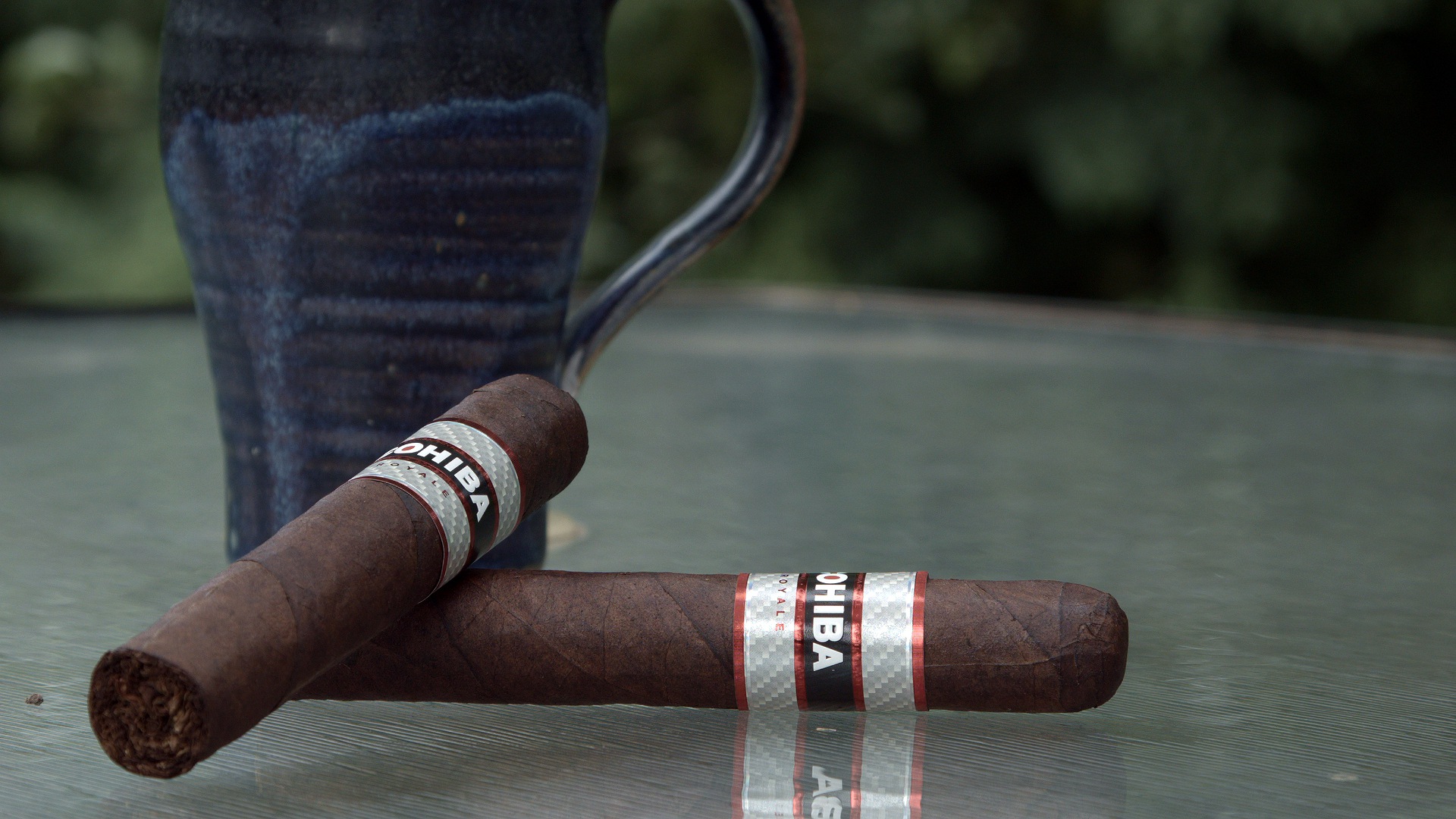 More full-flavored than full-bodied—at least in terms of strength—with core flavors of leather, earth, cedar, and sweet spice. The smoke offered a dense chewiness, excellent balance, and some pleasant change-ups. Overall, a wonderful mix of earthy, wood, and spicy layers with just the right amount of sweetness. 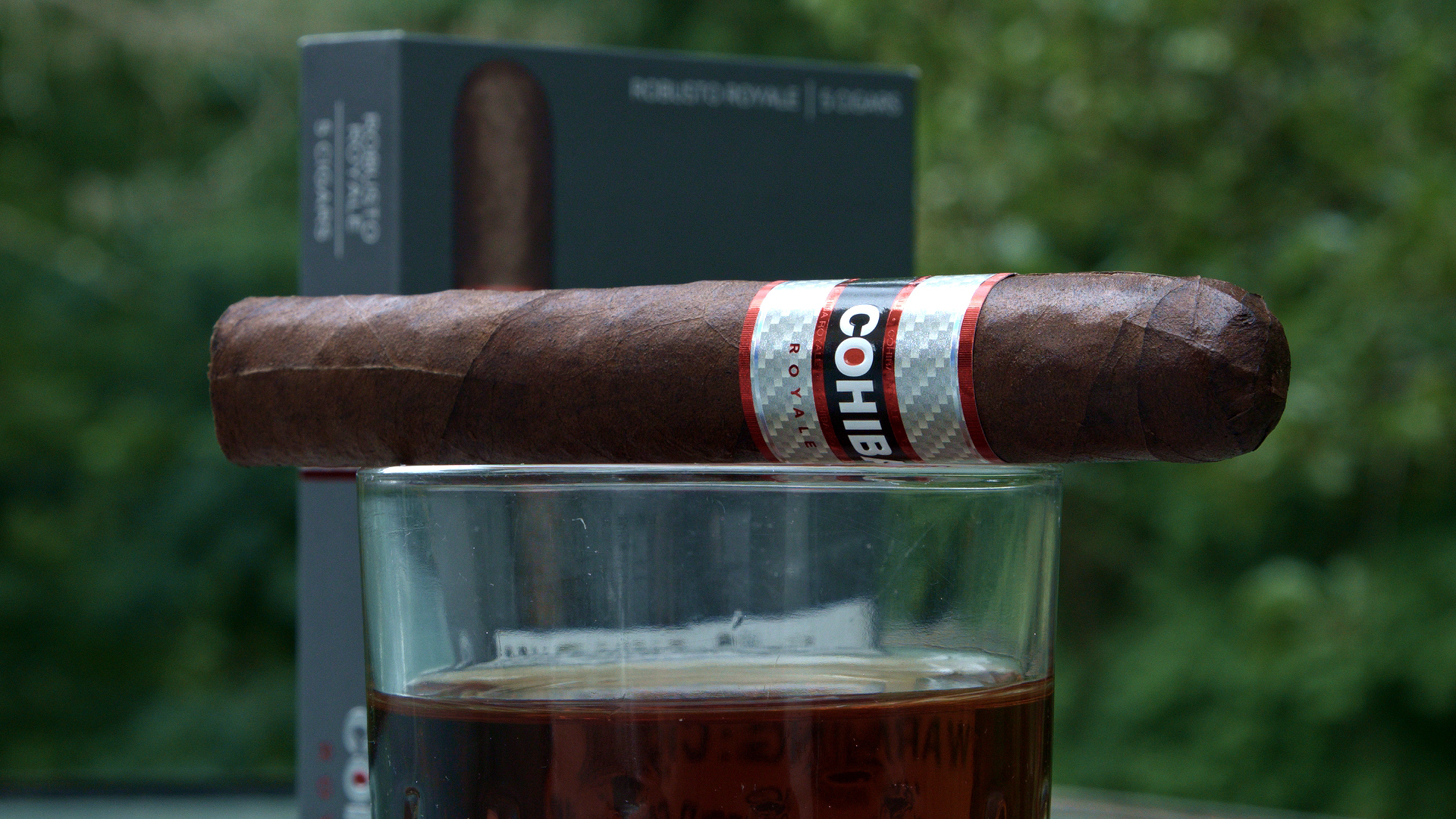 You can try a summery iced tea as Sean did. We also agreed this cigar would go perfect with a good Bourbon. Sean suggested one that’s “not too hot” in ABV, and somewhat on the sweet side, like Maker’s Mark, or Old Forester. I thought a good Japanese whisky like the Hibiki Suntory Japanese Harmony would be a great match, especially after dinner. 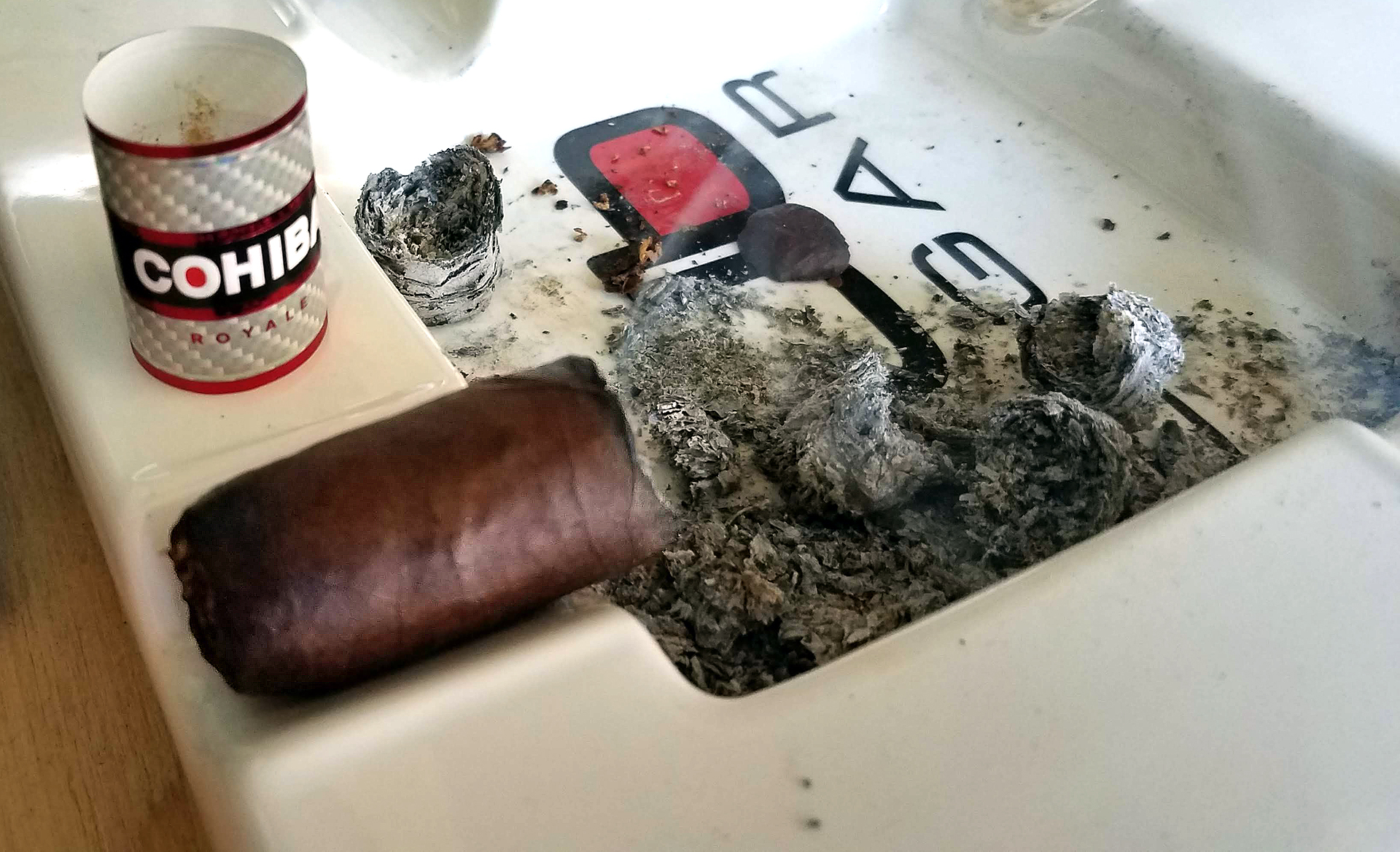 No doubt, the Cohiba Royale Robusto may be a little steep price-wise for some. However, in recent years there have been several cigars with similar price points which I feel have been worth the investment. That’s why I’m glad they did the Royale in 5-packs, too. The long-aged tobaccos are definitely one of the keys to this cigar. They also account for this cigar’s smoothness and ability to deliver a full-bodied smoke without overpowering you. For those who appreciate the ultra-smoothness and complexity of such highly refined blends, the Cohiba Royale Robusto is a keeper.