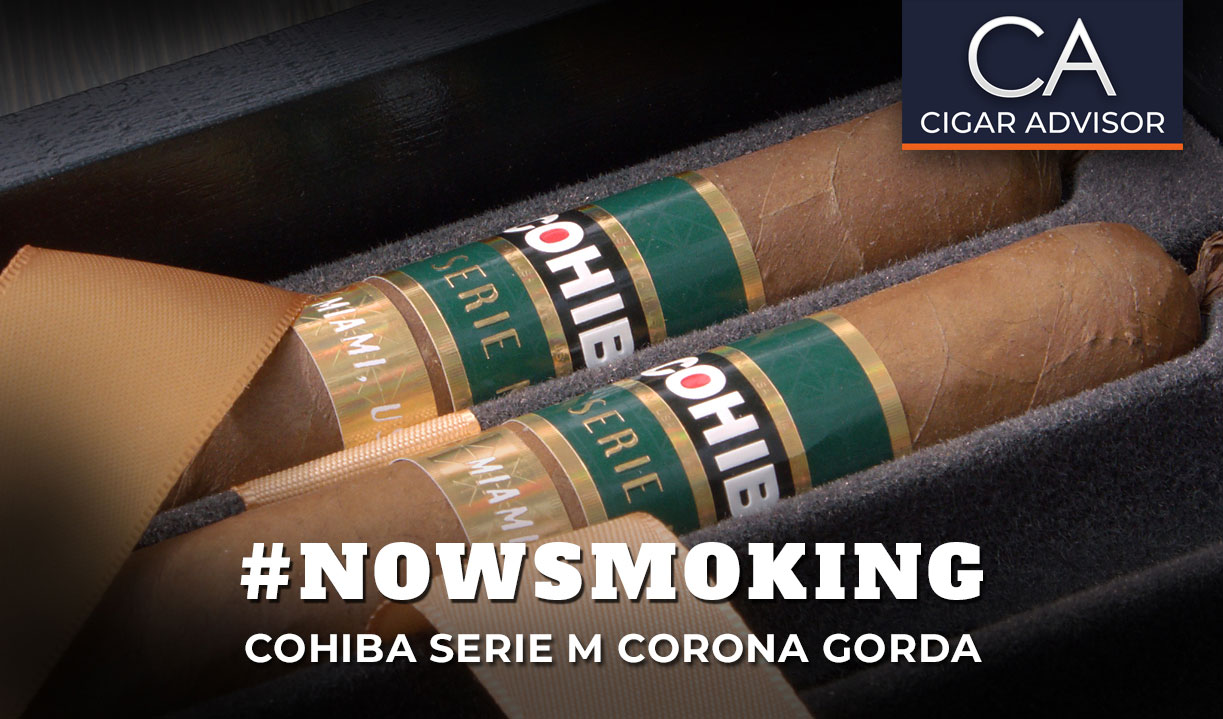 The Cohiba Serie M cigars made their debut in April of 2021 with the release of the Cohiba Serie M Toro. It was an unprecedented move for the brand, in that, Cohiba Serie M was the first Cohiba cigar made in the U.S. The project included a collaboration between General Cigar’s Cohiba team, Sr. brand manager Jason Andrews and Cohiba brand ambassador Sean Williams, and Sandy Cobas, owner of the esteemed El Titán de Bronze Cigar Factory in Miami’s famed “Little Havana” district. For the 2022 release they went with a taller and slightly slimmer Corona Gorda format made in a limited edition of only 50,000 cigars. Additionally, to assure the quality and consistency of the craftsmanship, the Serie M rolling was assigned to Sandy’s most highly-skilled expatriate Cuban master torcedores who rolled the cigars using the intricate entubado method.

“Since its debut a year ago, Cohiba Serie M has been a resounding success.” said Williams. We’ve received high praise from cigar media, shop owners and cigar lovers who have called Serie M one of the most exciting Cohiba blends they have ever smoked. We’re proud to release the blend in a new size, giving cigar connoisseurs another opportunity to experience the artistry of Serie M.”

Construction: About as good as it gets. Once removed from its cello and cedar plank, the cigar reveals a flawless tan-colored Corojo wrapper. I found no soft spots along the cigar’s length. The cigar also feels a little tight. The fantail at the cap is done perfectly, plus the foot of the cigar is also closed with tobacco which aids in lighting the cigar.
Cold Draw: The wrapper tobacco that covers the foot makes it a little difficult to taste much of anything, although I did get a spicy taste from it.
Base flavors: Brown sugar, cedar, leather, black coffee, baking spices.|
Aroma: Sweet.
Burn & Ash: Textbook. Even as it gets with firm, dark grey ashes. 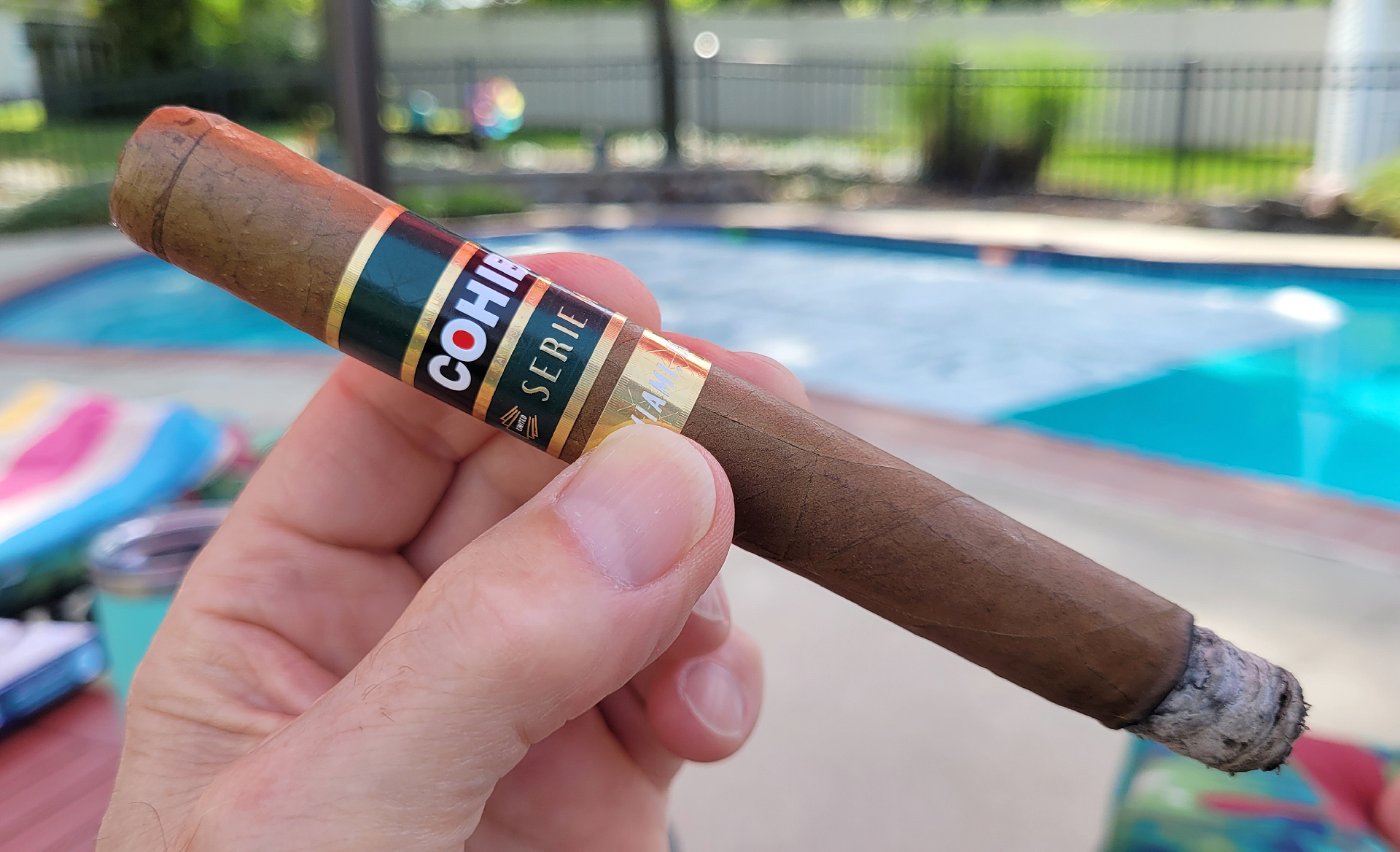 Once lit, the draw is excellent out of the gate. Following a very brief bittersweet start, the cigar settles-in issuing brown sugar and cedar. The smoke is smooth with a creamy mouthfeel. After an inch or more, brown sugar and cedar are the keynotes. The body is dead center medium and as the cigar approaches the mid-section a note of black coffee arrives. 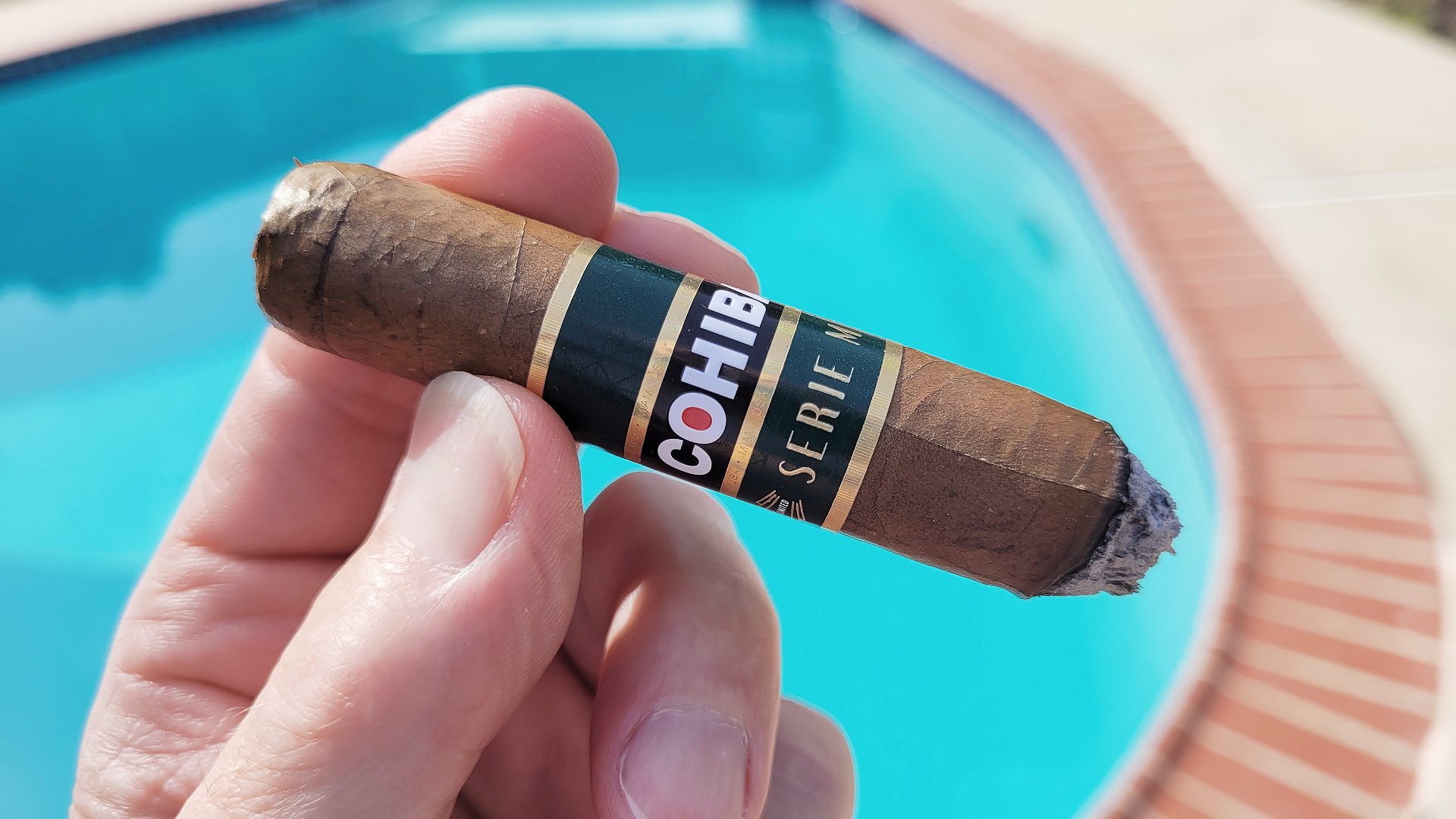 The smoke continues to be very smooth, a little sweet, well-balanced, and remains medium in body. For the finish, the black coffee tends to linger on the palate. At the heart of this section a leathery flavor enters the mix and the finish transitions to notes of baking spices. At this point I began to realize just how nuanced and refined this cigar really is. With only a couple of inches remaining, so far the cigar has performed beautifully on all counts. 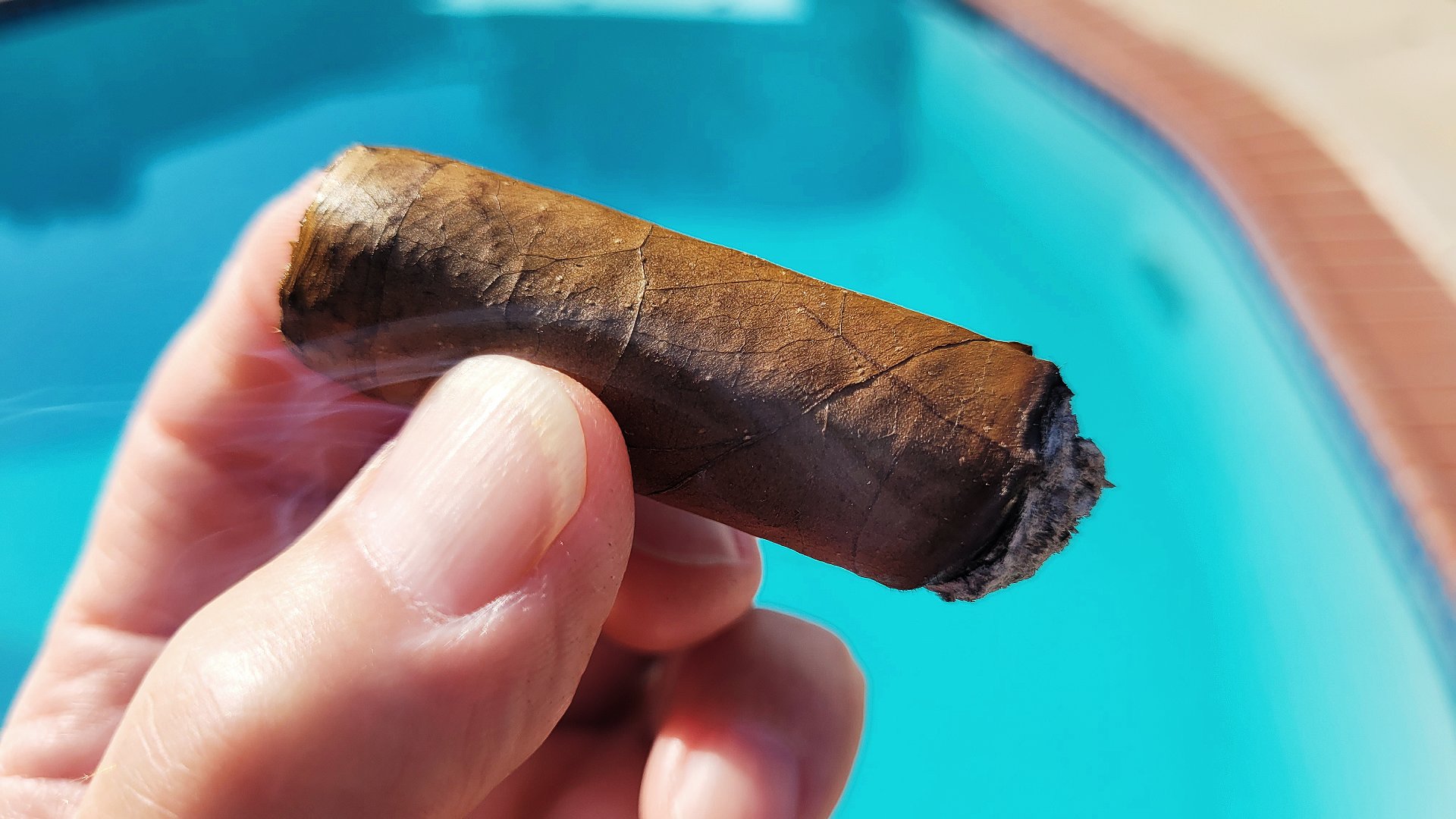 The smoke continues to be mighty smooth, while the body and strength haven’t budged from the medium zone. The leather has intensified a bit, the black coffee is still present, and some earthier notes begin to creep in. The brown sugar appears to have faded a little, but the smoke is so creamy and well-balanced there are other appealing flavors to support going for the nub. 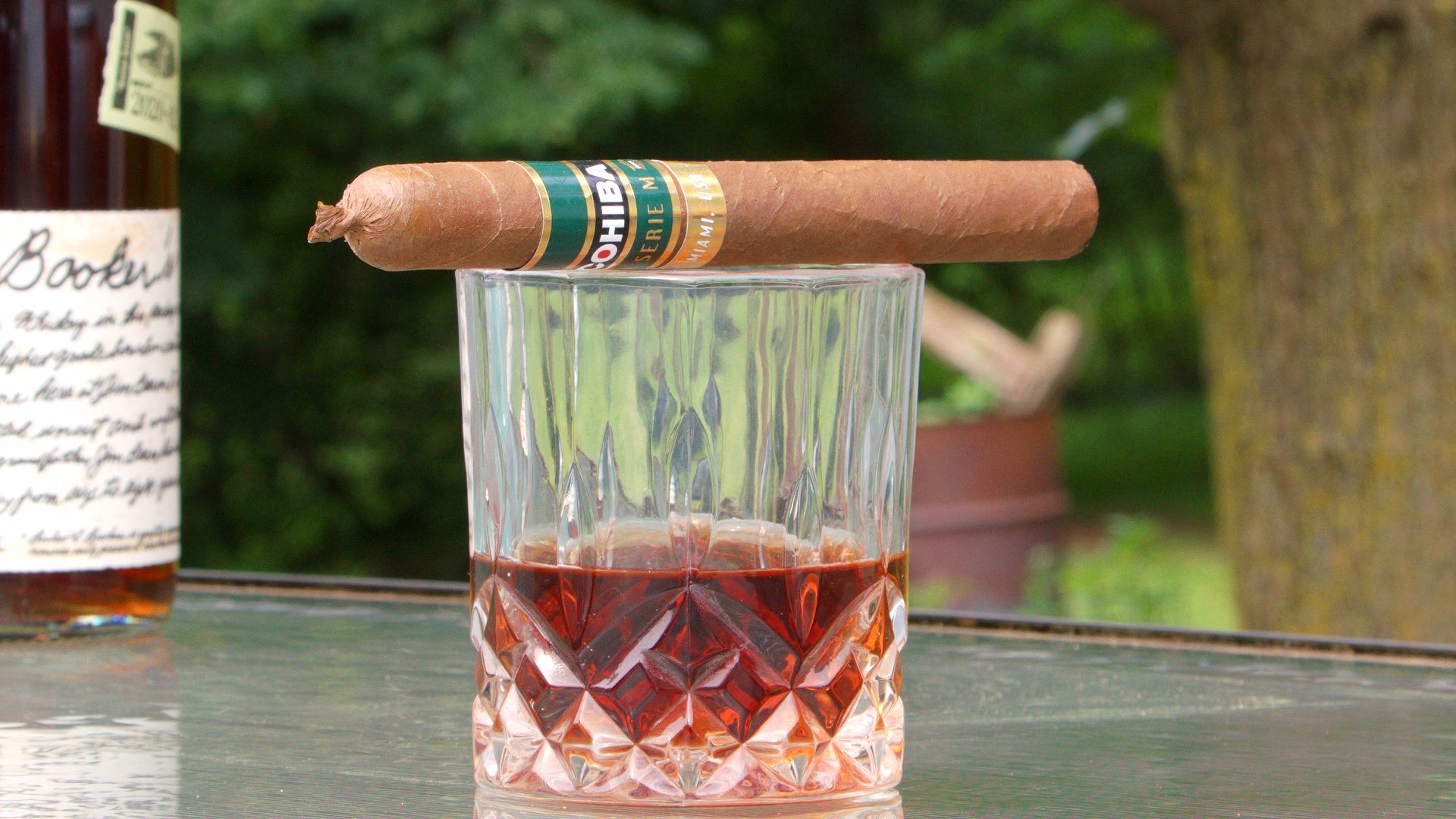 In my opinion, you could pair the Cohiba Serie M Corona Gorda with a long-aged single malt, bourbon, or añejo rum. Even mixed cocktails like a Manhattan, Old Fashioned or a Margarita would work, but not too sweet. I think a cigar of this caliber would also do well with a fine brandy—think about it. For more combinations, see our Cigar & Spirit pairing guide.

Having smoked the Cohiba Serie M Toro last year, it’s hard to say which size I like better. Yet if anything, the Corona Gorda proves that different sizes of the same blend produce a different flavor profile and character. Additionally, it seemed that the longer I smoked this Cohiba the more I began to appreciate it.

I also can’t emphasize enough that this cigar needs to be savored slowly. This is not a heavy, full-flavored, in-your-face smoke. It’s nuanced to the max with a more subtle character. Any experienced cigar smoker with a well-developed palate should be able to taste the difference between well-aged tobacco and the specially selected tobaccos used in this blend. I neglected to mention this in the video, but this is probably the most Cuban-like non-Cuban Cohiba I’ve smoked.

The Cohiba Serie M also comes with a luxury price tag that surprised even me. However, it’s not all that far from several other new cigars I’ve seen in recent months. So, if you have the means, go for it. Looking for occasional rare treat? Go for it. Want a stunning smoke for a special occasion? Go for it. Suffice it to say, I found this Corona Gorda very impressive, and if you do happen to go for it, I believe you’ll find this Cohiba worth the experience.

Reading Time: 5 minutes Now in full production, CAO Zócalo is “more refined and nuanced than it appears,” making it a good end-of-the-day or after dinner cigar. Can you guess what Gary suggested to pair with it?