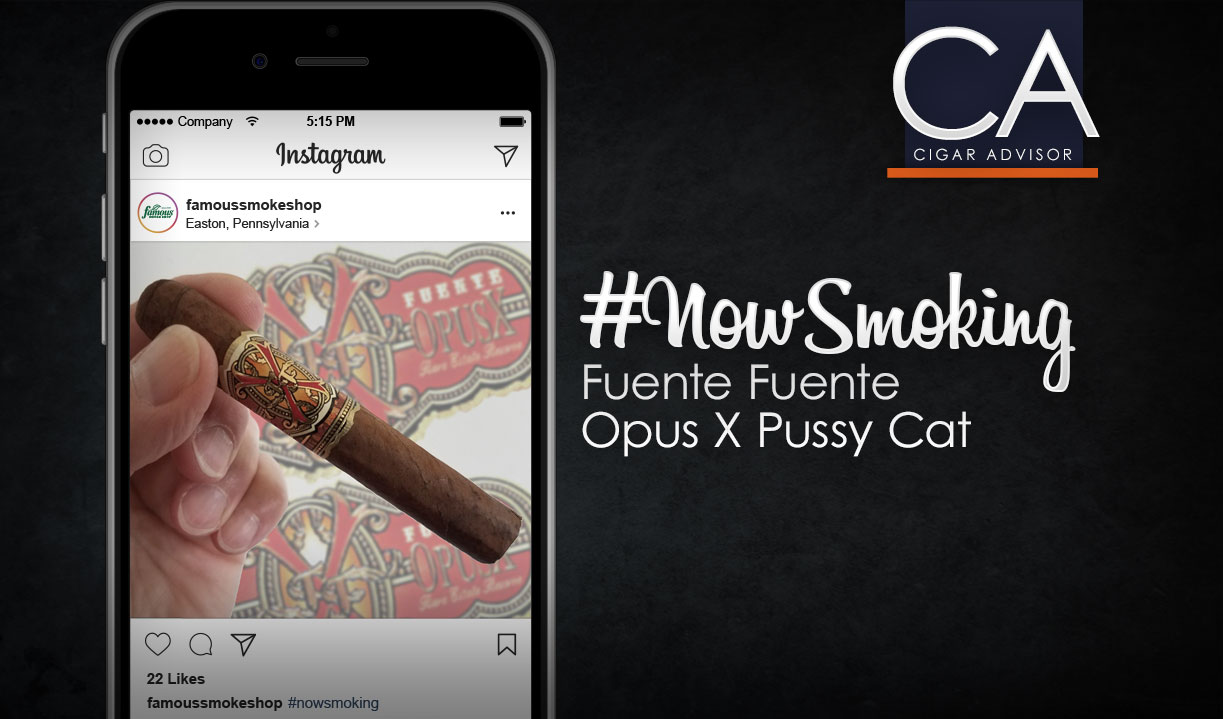 Who’d a thunkit? A Fuente Fuente Opus X cigar named “Pussy Cat?” Well, it’s true, and thanks to its iconic pedigree and zealous fan base, this luxury cigar has already attained “unicorn” status, making it virtually unobtainable at this point. But we can wish can’t we? The Opus X Pussy Cat is a well-made, 4¼” x 42 Petite Corona that offers a very smooth, creamy, and mostly sweet-spicy smoke. From my limited experience with OpusX (I’m more of a Fuente Don Carlos smoker), I expected a spicier experience, but I’m not complaining. The base flavors boiled down to a caramelized mix of salt, sweet spice, white pepper, and a pleasant tanginess. Moreover, this kitty smoked for almost two hours and never turned harsh – even in the last half-inch. Yep, it’s a nubber. Opus X disciples who can find Opus X in stock might just luck out and be able to give this cat a home. [Ed. Note: Opus X is available in limited supply, in-store only at Famous Smoke Shop. Contact us for details.]

Arturo Fuente Opus X fans are always champing at the bit for the next limited edition release, and the Pussy Cat, albeit a bit on the short and thin side, is no exception. The thing is, I found it pretty difficult to find much information on this cigar; not even a press release. Maybe all that matters is the word of mouth that a new Opus X is circulating and the hordes converge on any cigar store that just might happen to have some. One resource cited that there might be “more rumors and speculation than verified information” on the cigar. Among them was that the cigar was initially made erroneously or that it was too mild, hence its “Pussy Cat” moniker. Lack of media buzz notwithstanding, there seems to be plenty of consumer buzz on this Petite Corona because it’s a relatively new Opus X cigar.

As you would expect, the Opus X Pussy Cat is beautifully handcrafted. The packing is even and firm, and the cigar had no soft spots. The wrapper had some freckles, but the color had an attractive rosiness, while the cap was a well-made two-seamer that clipped-off in a perfect circle. The cold draw offered a pleasant salty-sweetness with a light herbal note.

The smoke was very smooth, creamy, and plentiful, revealing a perfectly even burn line. One of the most impressive observations was the ash was one of the toughest to let go. Trying to tap it off along the edge of my homemade seashell ashtray, it resisted to the point where I had to practically saw it off. Balance-wise, the flavors were tightly-knit, which made for a very satisfying, full-bodied smoke.

The initial puffs drew easily and were quite sweet, underscored with a light peppery taste that remained on the finish. I expected a much spicier smoke, but the key notes during the early stage and beyond were mostly a caramelized mix of salt, sweet spice, some white pepper, and an appealing tanginess. Even in the last inch the smoke was ultra-creamy with no sign of bitterness as even the sweeter elements held-up, which is not usually the case. The finished nub was a finger-burning 3/4’s of an inch! Yes, I measured it. (I would’ve gone longer but I couldn’t find my little surgical clamp.)

Probably not as much as the larger Opus X sizes, but this little kitty has got a lot going for it. The flavors were very well-defined throughout, and the cigar lasted over 90 minutes without a relight. In the end, I noticed more consistency than change-ups, and more sweetness than the typical pepper for which Opus X is known.

I think you could pair just about anything with the Pussy Cat across the board in terms of liquor, and I would even add a good IPA for beer drinkers who want to cut some of the sweetness. But even though I paired mine with regular coffee, this cigar would be even better with espresso.

Without a doubt, Opus X fanatics, as well as cigar smokers who lean toward small cigars with some savory punch. As I said in my video promo, I don’t smoke a lot of Opus X or Petite Coronas, but the Pussy Cat was a nice surprise that I would return to. It also emphasized the point that it pays to try other size cigars than you regularly smoke.

I would have to say so based on my tasting notes and the fact that it’s a rare find. Devoted OpusX disciples would certainly be happy to have the opportunity to add the Pussy Cat to their collections. Yet by now, the Fuente Fuente Opus X Pussy Cat may be in the “unicorn” category, since most retailers rarely have Opus X in stock for very long. Happy hunting everyone.