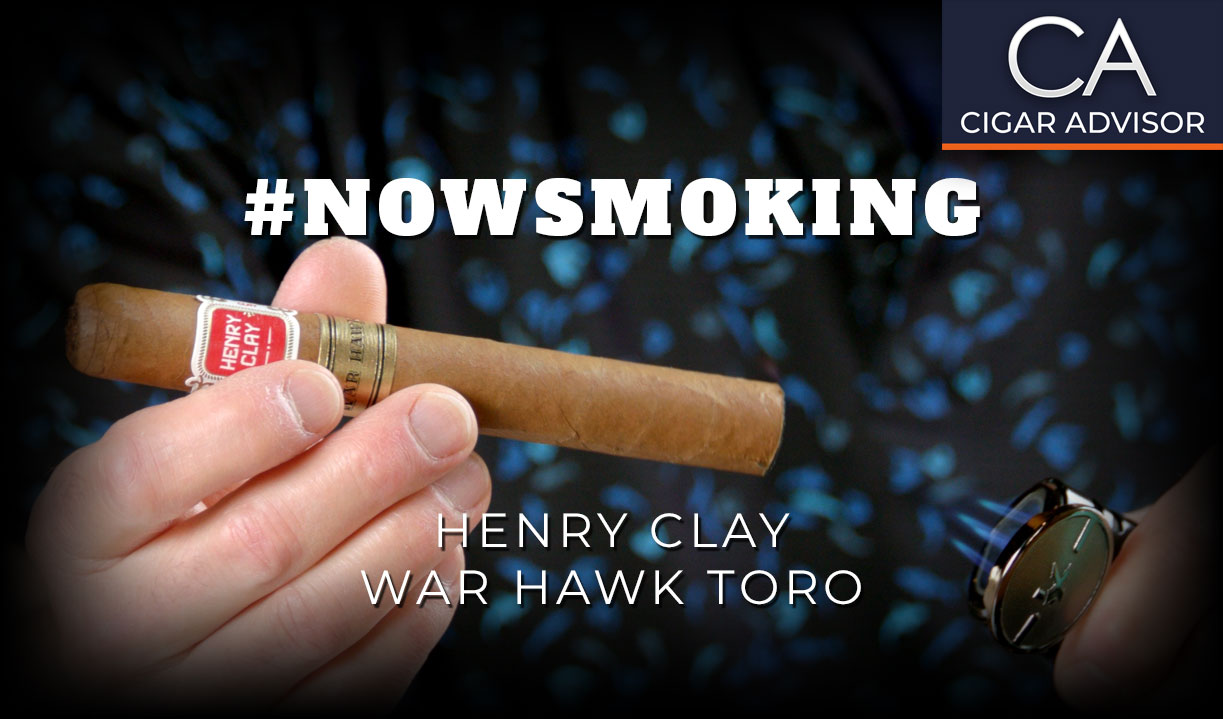 The Henry Clay “War Hawk” cigar is the first in a three-part series created by Altadis U.S.A. entitled the “Immortal Trio.” This debut release was made in recognition of Kentucky Senator Henry Clay, a staunch U.S. nationalist who later became Speaker of the House and spearheaded the movement that led to the War of 1812.

The cigar was solidly built with no soft spots and the silky Connecticut wrapper, along with the cigars weight, offered a nice feel in the hand. When cut, the cigar drew well, offering cold notes of hazelnuts, sweet tobacco, and a fresh-baked cookie-like component, which had macadamia nut quality.

The Henry Clay War Hawk cigar offered initial flavors of earth and pepper with a healthy volume of creamy smoke through both ends. The flavors were well-balanced, consistent throughout, and left a long, lightly peppery finish on my palate. The cigar also burned perfectly with a body that was straight-down-the-line medium, revealing long, firm, nickel stack ashes and a sweet, slightly floral aroma. Moreover, the cigar never moved very far from its medium-bodied position, even in the final inches.

Earth, sweet spice, oak, toastiness, and black pepper make up the base of this cigar. There’s plenty of pepper through the nose in the early stage, but later retrohaling showed more creaminess with a slight nutty taste. The primary pepper note faded in the midsection but remained on the finish. Even the final puffs remained creamy, flavorful, and well-balanced.

Yes, in that there seems to be a battle going on between the sweet and spicy elements, while the toasty, nutty, and woody flavors stay in their lane. Some sweetness came back in the last act, and with just over an inch to go, the pepper took out the sweet spice; so, there are several interesting change-ups along the way.

My coffee, with half & half and very little sugar, paired perfectly with this cigar; add to that, the Henry Clay War Hawk Toro makes an excellent morning cigar. It would probably go nicely in the afternoon or after work with a beer, and for the evening, perhaps a not-too-sweet single malt Scotch or bourbon. However, the folks at Altadis USA, who make this cigar suggest pairing it with Bacardí Añejo Cuatro Rum.

It’s certainly a change of pace for the typical Henry Clay cigar smoker due to its lighter body, but there’s a LOT of flavor in this cigar. I think newer cigar smokers who want to try a Henry Clay would really like the War Hawk for its creaminess, medium body, and well-balanced flavors. This is most certainly not their grandfather’s Henry Clay, making it right in the pocket for today’s newbies looking for a rich-tasting smoke that hits on all cylinders, yet won’t overpower them.

Most definitely. For full-bodied smokers, the War Hawk makes a full-flavored change of pace from the bolder fare. And at a price that lies in the $7-$8 range (at press time), the War Hawk offers a long, relaxing cigar with an impressively satisfying flavor profile.

Reading Time: 2 minutes See a demo on how to fix an unraveling cigar wrapper, and get a cheat sheet for pairing cigars and drinks. Plus: is cigar cello really cello? See this month’s Fan Mail videos and find out!