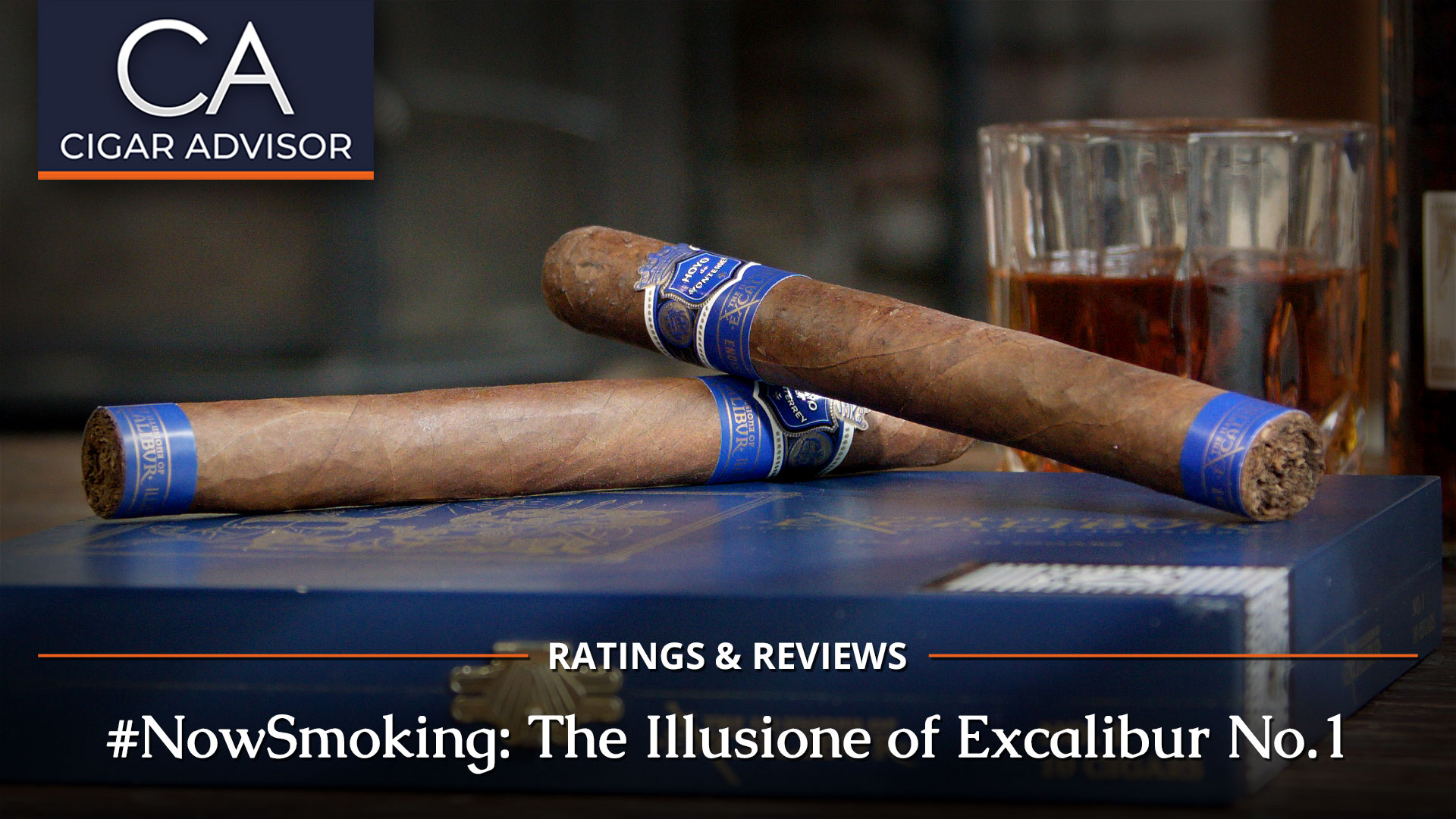 Excalibur Illusione No.1 Cigar Back Story

The Illusione of Excalibur (as the company calls it), is Excalibur by Hoyo de Monterrey’s very first collaboration cigar. In this case, a collaboration is between Illusione Cigar’s Dion Giolito and General Cigar’s Justin Andrews. It’s a limited-edition cigar made in one size, and this release marks it as the first Excalibur to be made in Nicaragua.

Commenting on the project, Justin Andrews said: ““Dion Giolito and Illusione’s success in the premium cigar category has been driven by his rigorous standards for tobacco and his ability to create cigars that wow the market. So when it came to developing a blend for Excalibur, Dion was our hands-down first choice. I’m very proud of how this project came together. My only regret is that we couldn’t make this a full-time launch.” 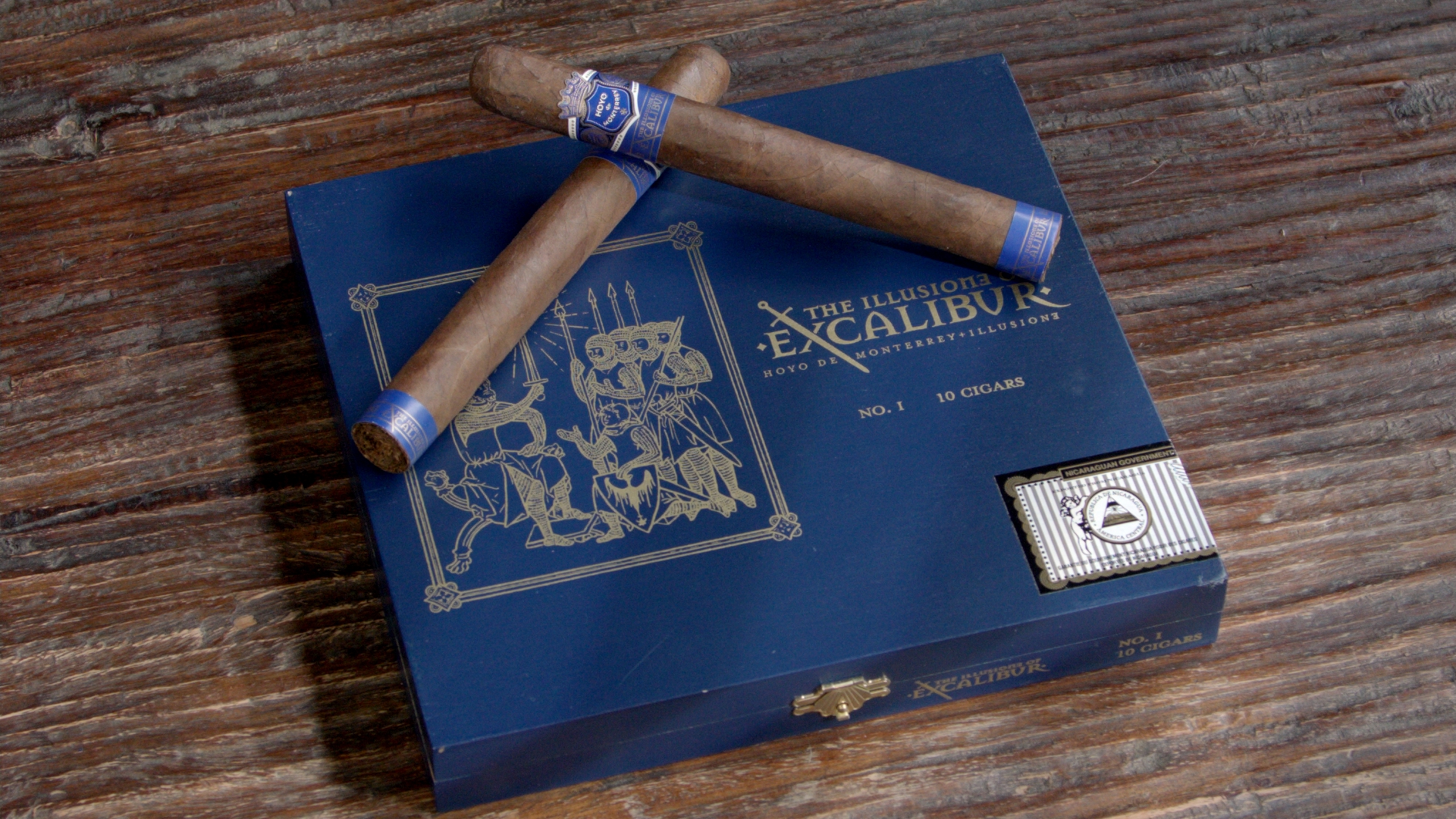 “When Justin asked me to do a collaboration and offered up Excalibur, I immediately jumped at the opportunity. For my part, I wanted to make a cigar in the spirit of Excalibur with a bold character and packaging that pays homage to the brand’s origins.”

Dion and Justin also had the cigar rolled to a 7¼x54 vitola because they felt those dimensions best represented the aged tobaccos used in the blend.

Excalibur Illusione is presented in royal blue lacquered boxes with gold detailing. A total of 4,960 boxes were released in July of this year.

Construction: This is a nice, big, good-looking cigar. The wrapper has a nice even caramel color; there are a few veins, but they don’t distract from the cigar’s overall appearance. Despite its size the No.1 doesn’t feel heavy and even feels balanced when held. I found no soft spots along its length. The triple seam cap clipped in a perfect circle with a double-blade cutter. The pre-light cold draw was sweet and nutty.
Base flavors: Sweet cedar, nuts, leather, sundry baking spices.
Aroma: Sweet.
Burn & Ash: Very good burn. Ash is a light shade of grey and holds on fairly well.

Illusione of Excalibur No.1 Cigar Review – Act I 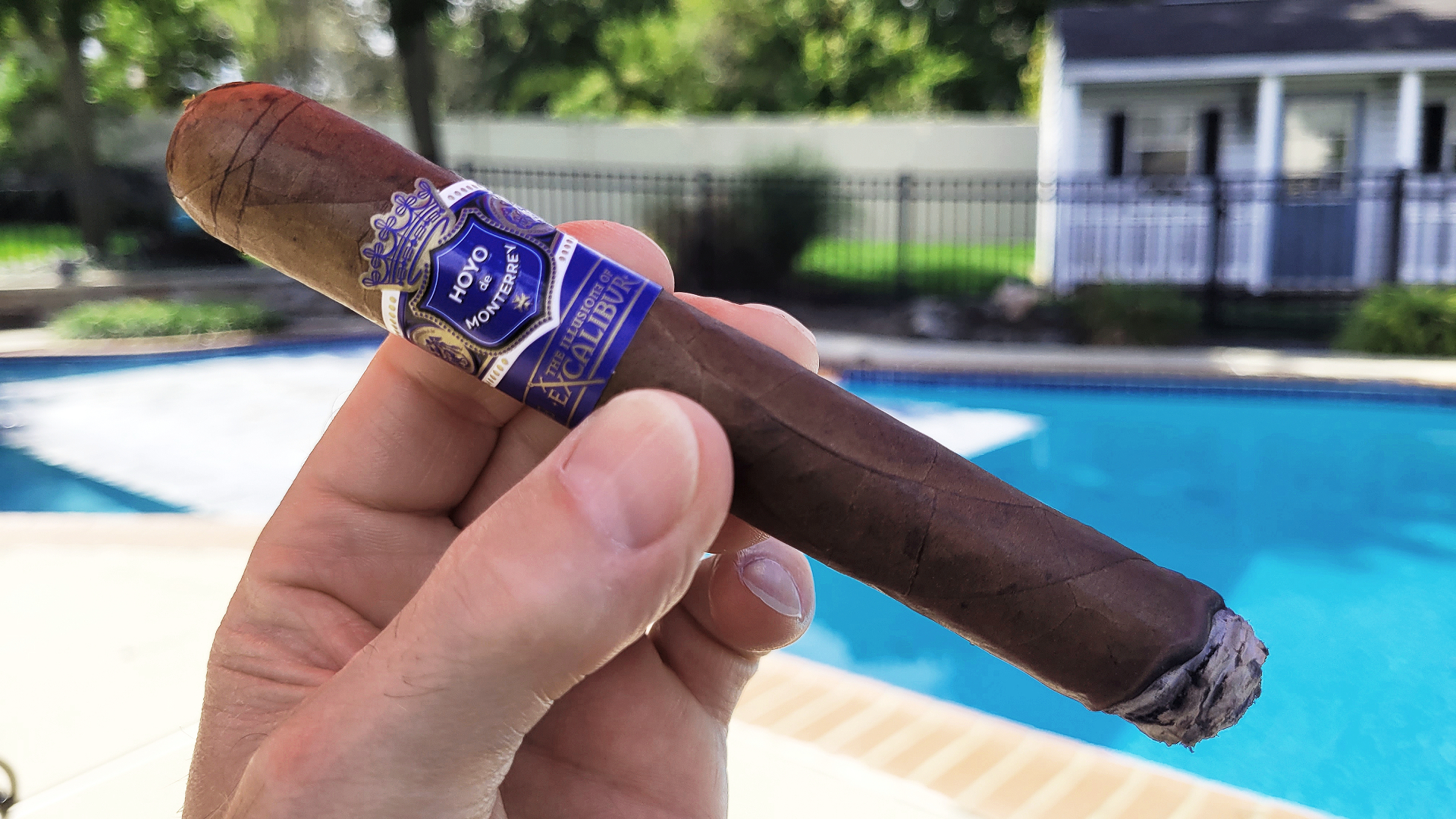 The opening notes were a mix of nuts and red pepper on my pre-video sample. The second cigar was much lighter in pepper. This may just depend on the position of the tobaccos which are likely front-loaded. Those used to smoking the Hoyo de Monterrey Excalibur No.1 might be a little surprised. At about half an inch the cigar relaxed into a smooth, medium-body smoke. From there, the cigar issued a nutty and lightly sweet smoke. The finish was long and spicy. A note of cream and some breadiness followed. By the end of this section the smoke was a little nuttier. Brighter notes of leather and sweet cedar responded in equal measure. 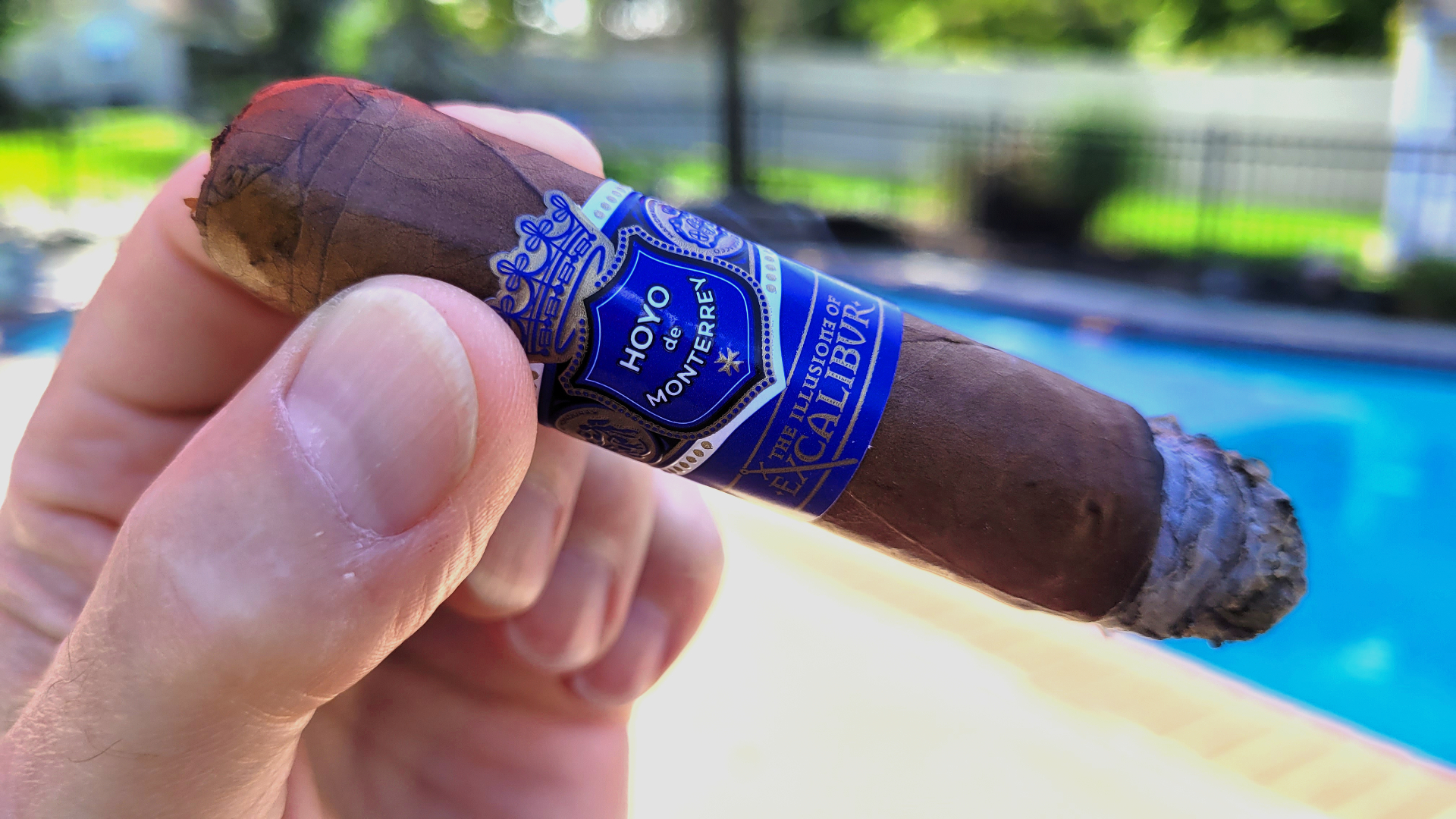 At this point the spicy finish was less prevalent and the smoke even smoother. The body was still medium. The smoke continued to be very creamy and nutty underscored by leather and sweet cedar flavors; most definitely the proverbial “sweet spot.” The baking spices also became more noticeable including nutmeg with cinnamon on the finish. 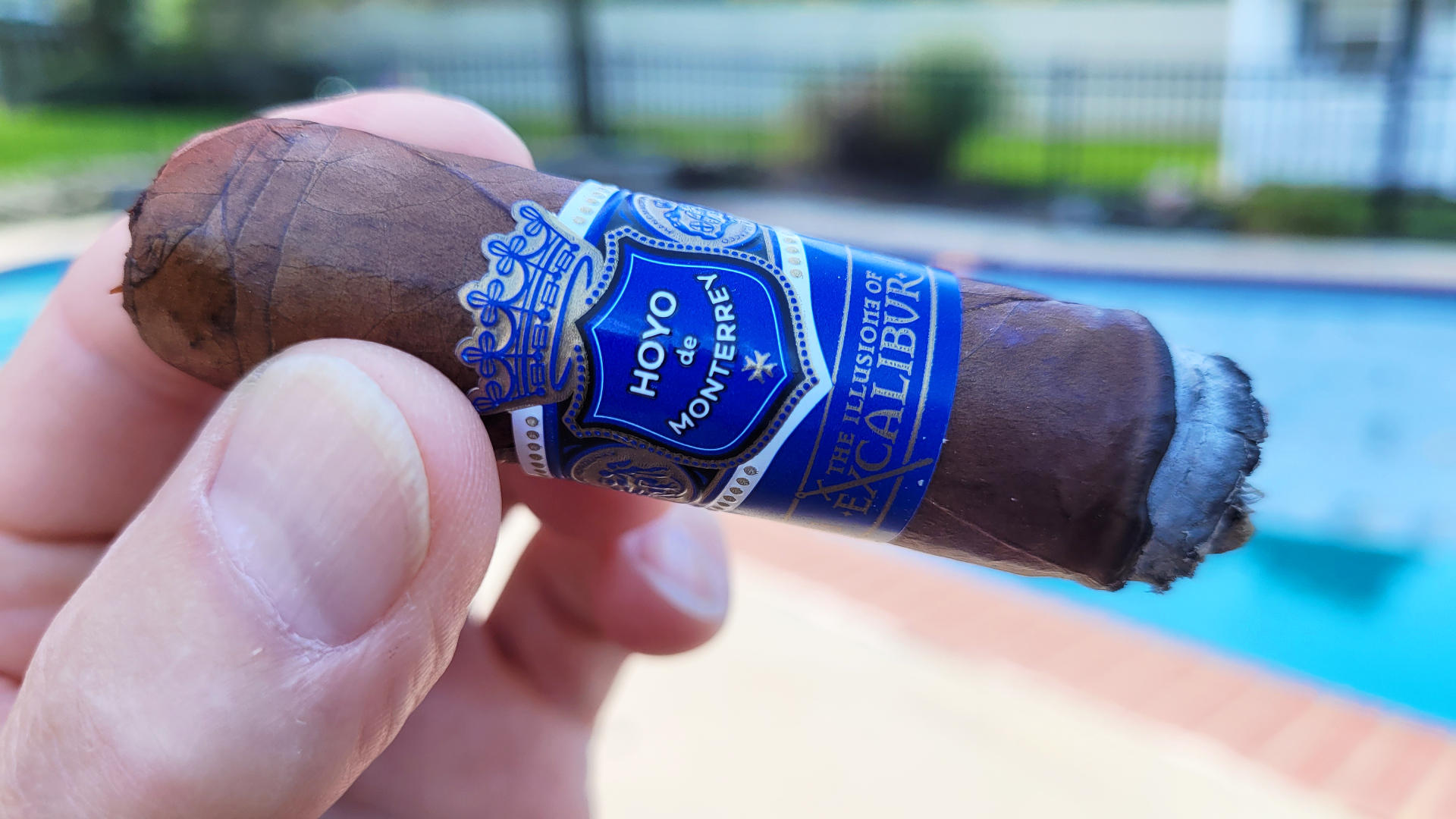 Mostly a continuation of the previous section. The smoke was still well balanced. The strength and body now medium-plus. Some espresso entered the mix, while nutmeg and sweet cedar remained present. This cigar, much like my pre-video sample, was tasty right down to the last couple of inches.

What beverage pairs well with the Illusione of Excalibur No.1? 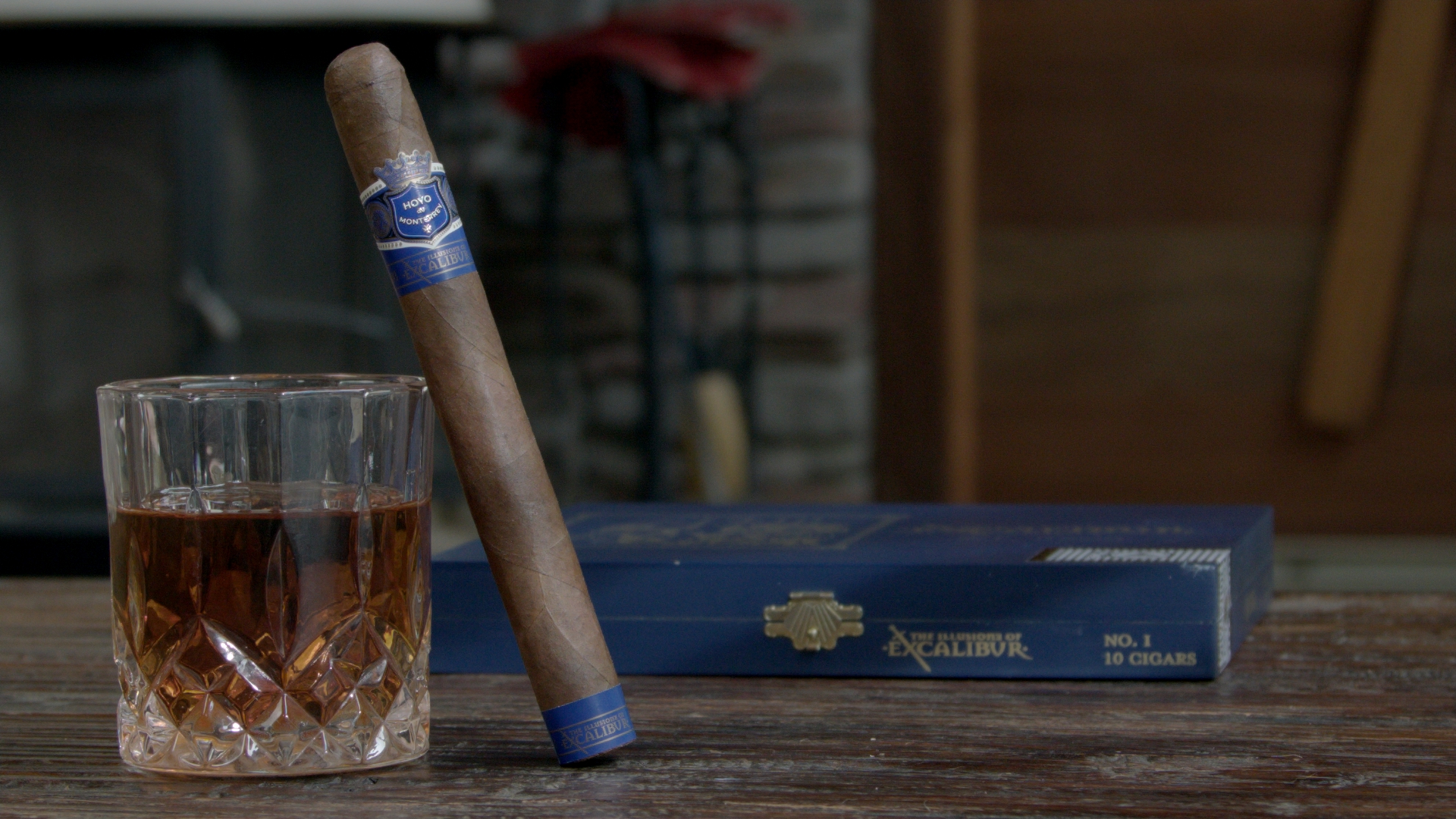 I could easily see this pairing with an espresso, or a lighter bourbon. Feel free to mix it up!

Are Illusione of Excalibur No.1 cigars worth smoking?

The Excalibur by Hoyo de Monterey No.1 has always been a popular golf cigar for it’s smooth, creamy, mellow to medium-bodied character. However, the Excalibur Illusione No.1 is more refined and complex. One could make the case for lighting it up after 18 holes. Either way, it qualifies as a long, rewarding weekend indulgence. Mostly medium-bodied, the smoke was flavorful, zesty, and balanced. With that, I can endorse it as an appetizing treat for novice smokers right up to more avid passionados. It’s not the most affordable cigar in the shop, but based on my two hours-plus experience, I think you’ll find it worth the coin. Dion Giolito and Justin Andrews did an excellent job and I hope they come out with additional sizes going forward.

Thanks for the dimensions. Probably will try thus one. “……sundry baking spices” LMAO.

Reading Time: 6 minutes These are top quality cigars, all made in excellent cigar manufacturing facilities. But the main reason I have referred to them as underrated is because there are many full-bodied cigar lovers who simply will not give a more subtle Connecticut Shade stick the time of day. But, newsflash for everyone reading: NOT ALL Connecticut Shade cigars are mellow and low on flavor. In fact, the cigars on my list – while they may not be dark, Maduro, ligero-laden beasts – these sticks all have profiles that boast a hell of a lot of nice, rich tobacco flavor