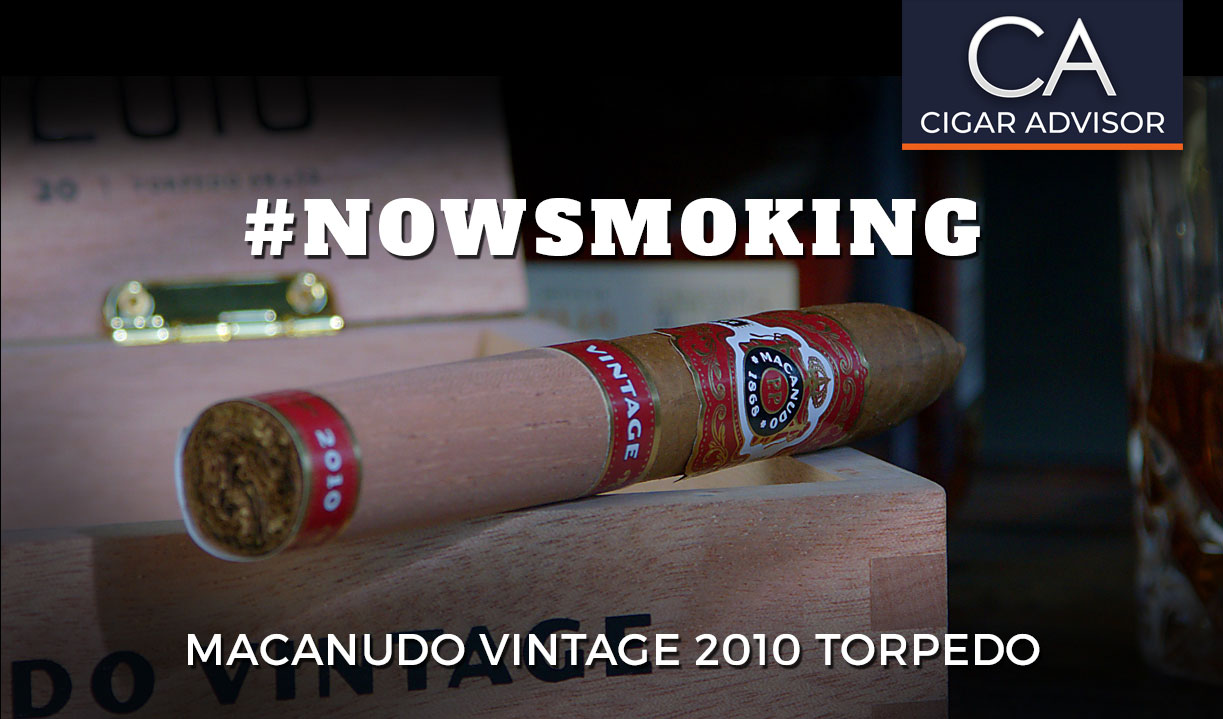 The Macanudo Vintage 2010 Cigars Back Story

Nearly 40 years ago, Macanudo created the world’s first “Vintage” cigar to spotlight an exceptional wrapper developed in part by Mother Nature herself. Enter the Macanudo Vintage 2010 that continues the brand’s Vintage tradition thanks to ideal climatic conditions, meticulous curing, and precise maturation techniques perfected by the artisans who create Macanudo cigars. 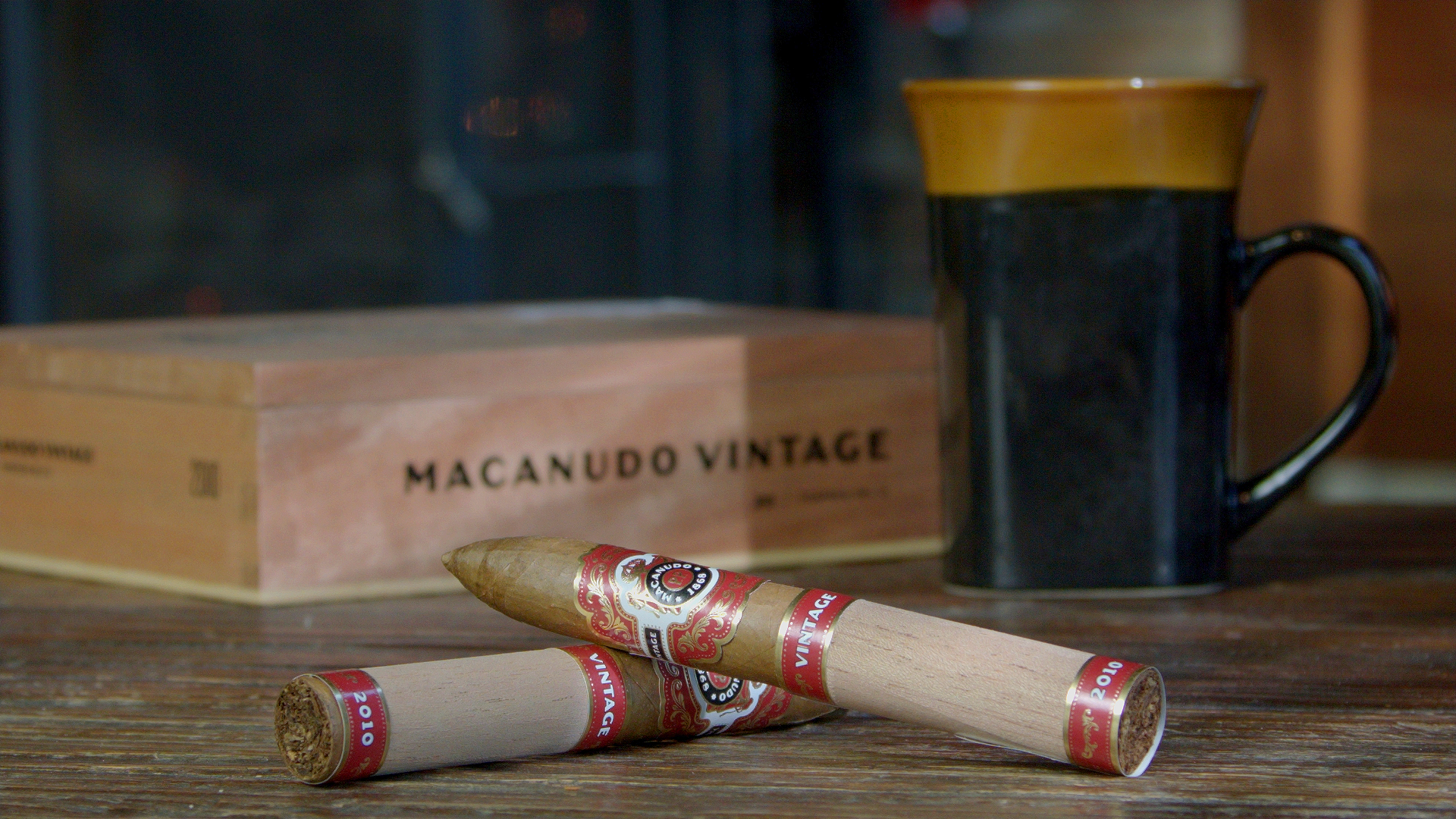 The 2010 growing season saw the hottest temperatures in 25 years throughout the Connecticut River Valley. When combined with high humidity and optimal rainfall for tobacco, the result was an exceptionally silky, shade-grown wrapper, Dominican Piloto Cubano 94, that was cured for eight weeks, then aged for the entire decade. It’s a proprietary Cuban-seed varietal by which the long-term process ultimately resurrected the unique aroma and taste characteristics the tobacco possessed two decades earlier. Ernest Gocaj (pronounced, go-cosh), who oversees the Connecticut growing operations for Macanudo said, “Given how unique and special this crop was, we were obsessive in monitoring the tobacco throughout the curing process, and ultimately brought its very best attributes to life.”

Construction: This Torpedo has an almost regal appearance to it. A cedar sleeve covers the bottom half of the cigar, and the Macanudo 1868 band at the neck is truly elegant. The cigar is well rolled, well-packed and feels good in the hand. However, the wrapper is extremely delicate, so handle with care.
Cold Draw: Excellent with a sweet hay/herbal flavor.
Base flavors: Cedar, herbs, sweet cream, light spice.
Aroma: The wrapper offers barnyard hay, while the smoke is mostly sweet.
Burn & Ash: Mostly even with a fine carbon line and an impressively firm light gray ash. 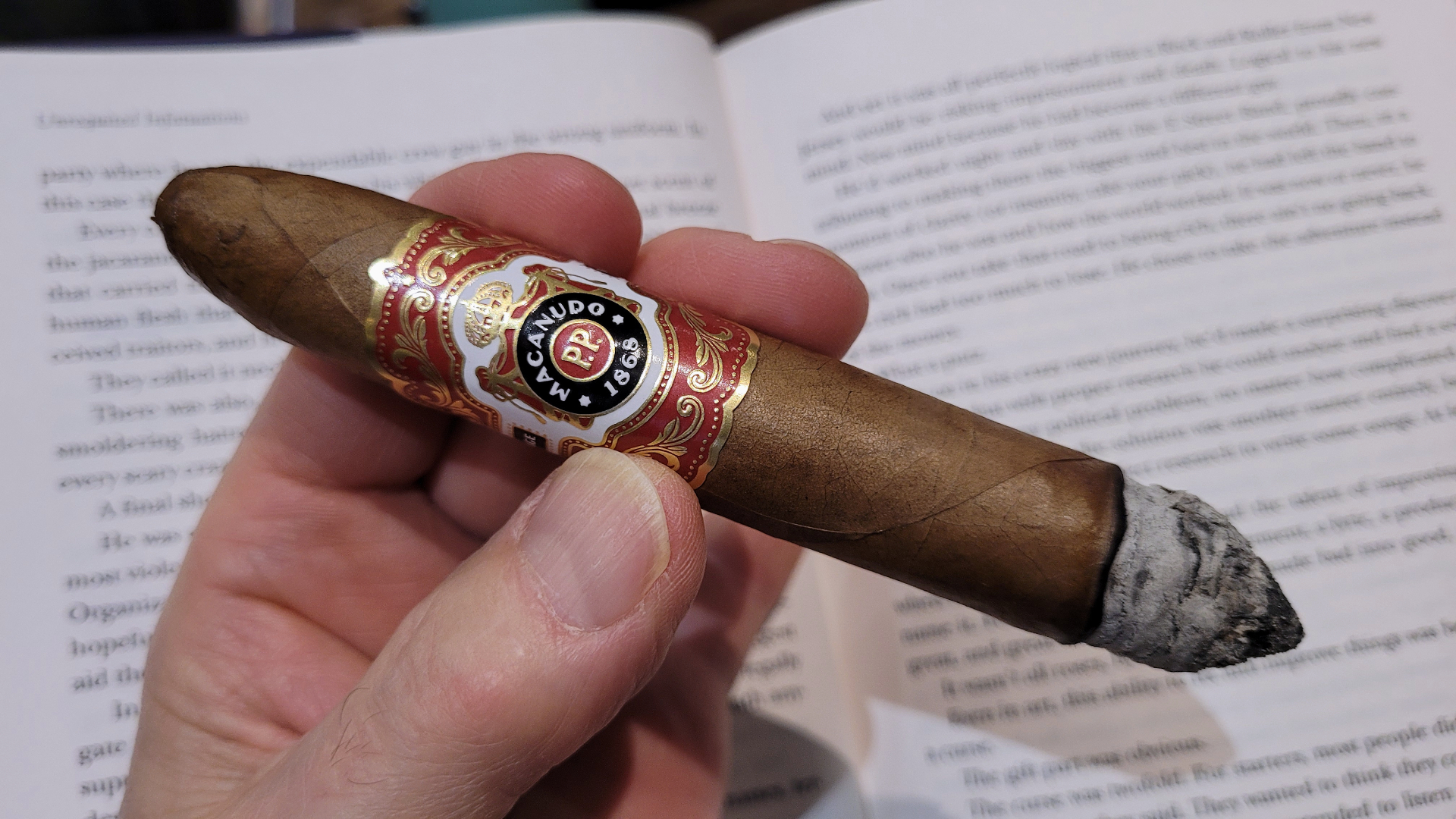 The cigar toasted and lit well, and the draw issued a good wad of smoke. Early puffs were a mix of herbs, sweet tobacco and a light hit of black pepper on the finish. Moving on it was mostly cedary and herbal, while also smooth, creamy, and mostly mellow in body. The first ash crashed at 1½ inches revealing a perfect cone (see photo). For the most part a well-balanced, toasty-cedary smoke with a slightly herbal aspect and light cream. 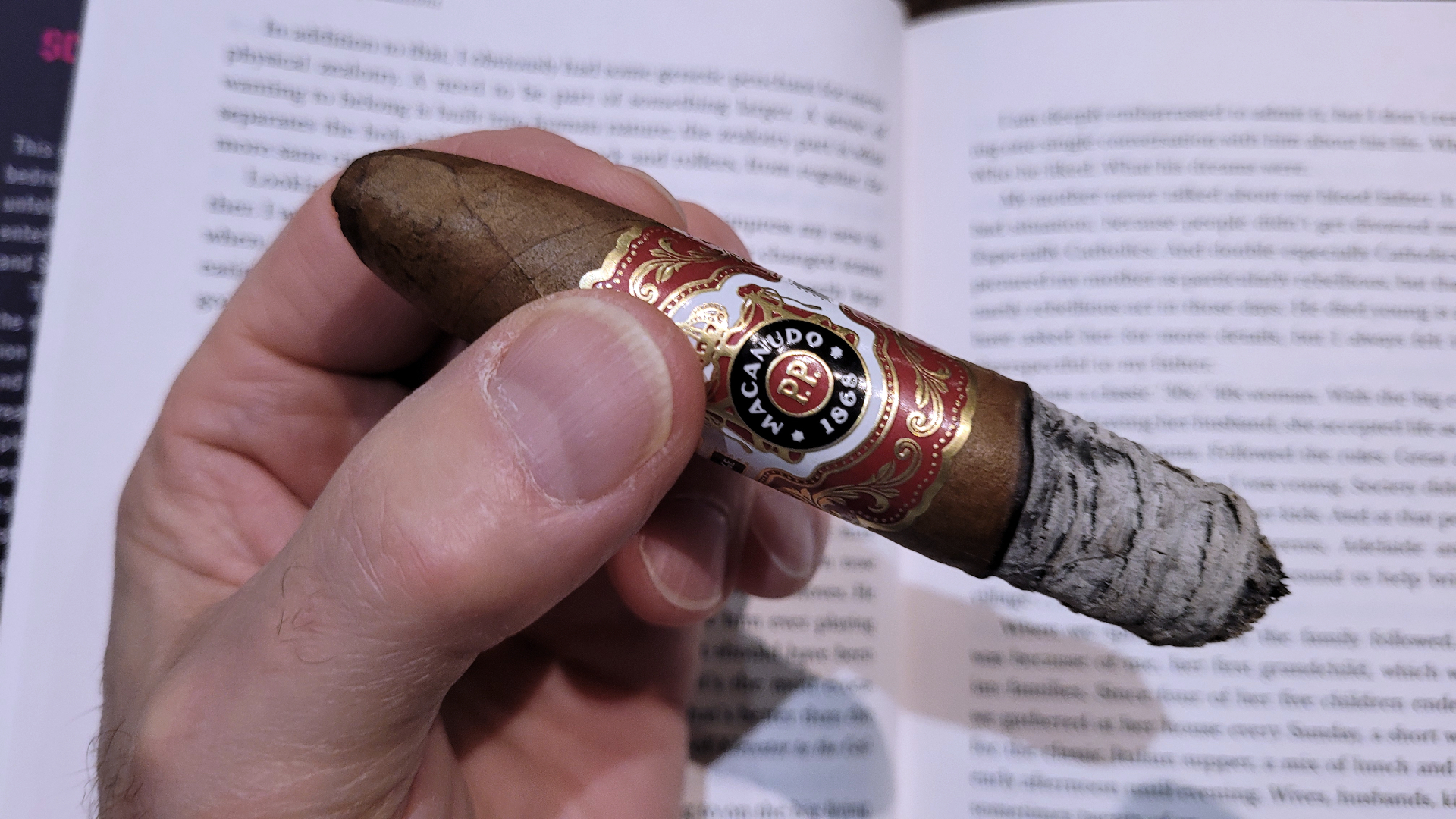 Still pretty mellow and consistent. The flavors tended to be more nuanced than blunt. That said, notes of savory herbs, cedar, sweet cream, some nuttiness, and a delicate note of spice on the finish made up the bulk of this section. Edging closer to the final third, the herbal aspect became a bit more dominant.

What impressed me most about this cigar was I felt like I was smoking one of those classic Connecticuts from the 1970s and 80s when cigars like Macanudo Cafe, Dunhill, and Montecruz, for example, owned the cigar store shelves. A more recent comparison would be what Steve Saka did with the Sobremesa Brûlée cigars. If you’ve smoked one of those, this Macanudo Vintage 2010 Torpedo is right up there with it. 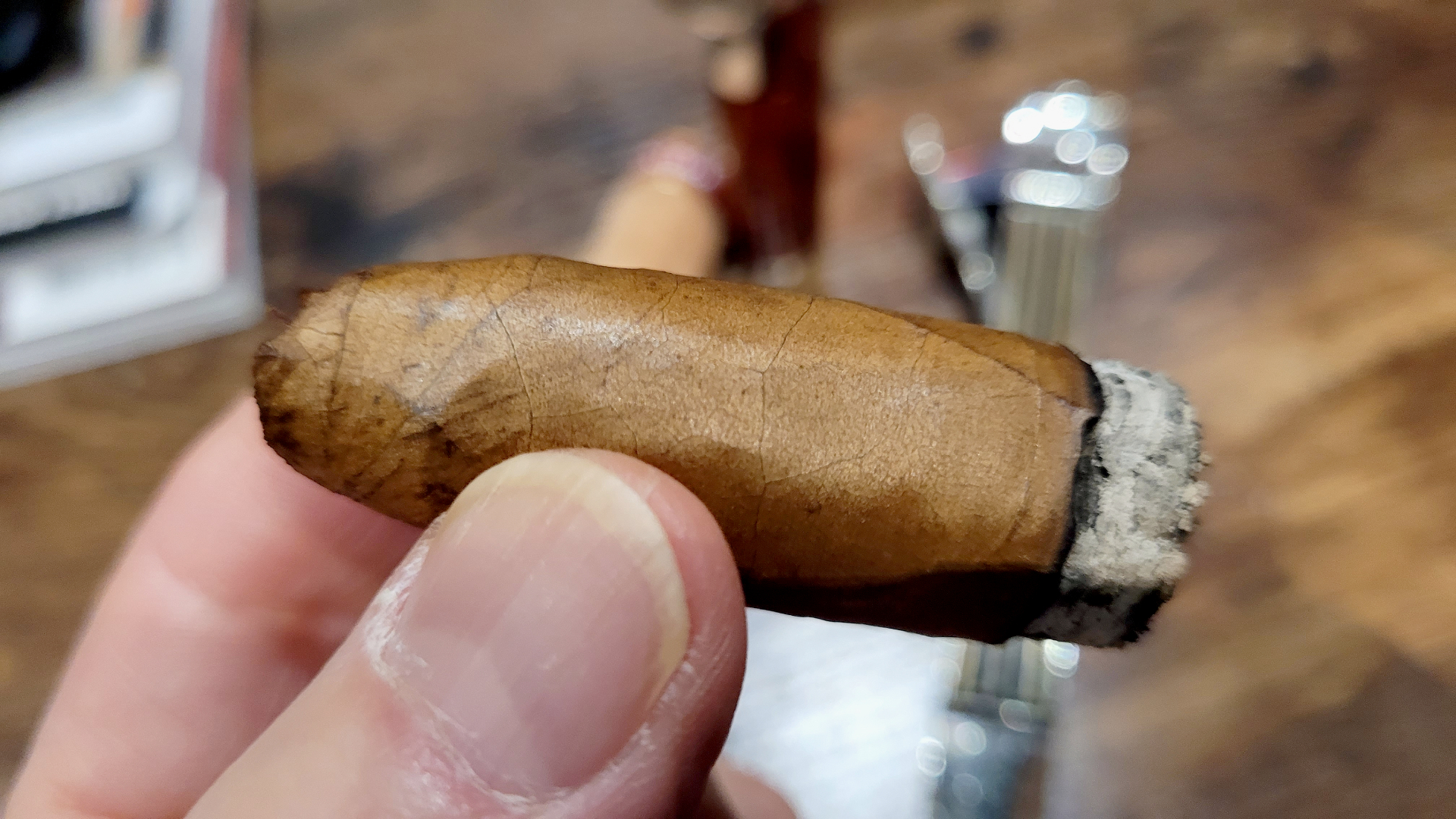 Now more medium in body. Flavors were now herbs, cedar, cream, and light earth with a hint of caramel-like sweetness on the finish. Despite the tobaccos’ long aging, I did pick up some bitterness as it moved into the last leg—your mileage may vary. Overall, this Figurado turned out to be a well-balanced and uber-creamy smoke with a short but satisfying set of flavors.

What beverage pairs well with the Macanudo Vintage 2010? 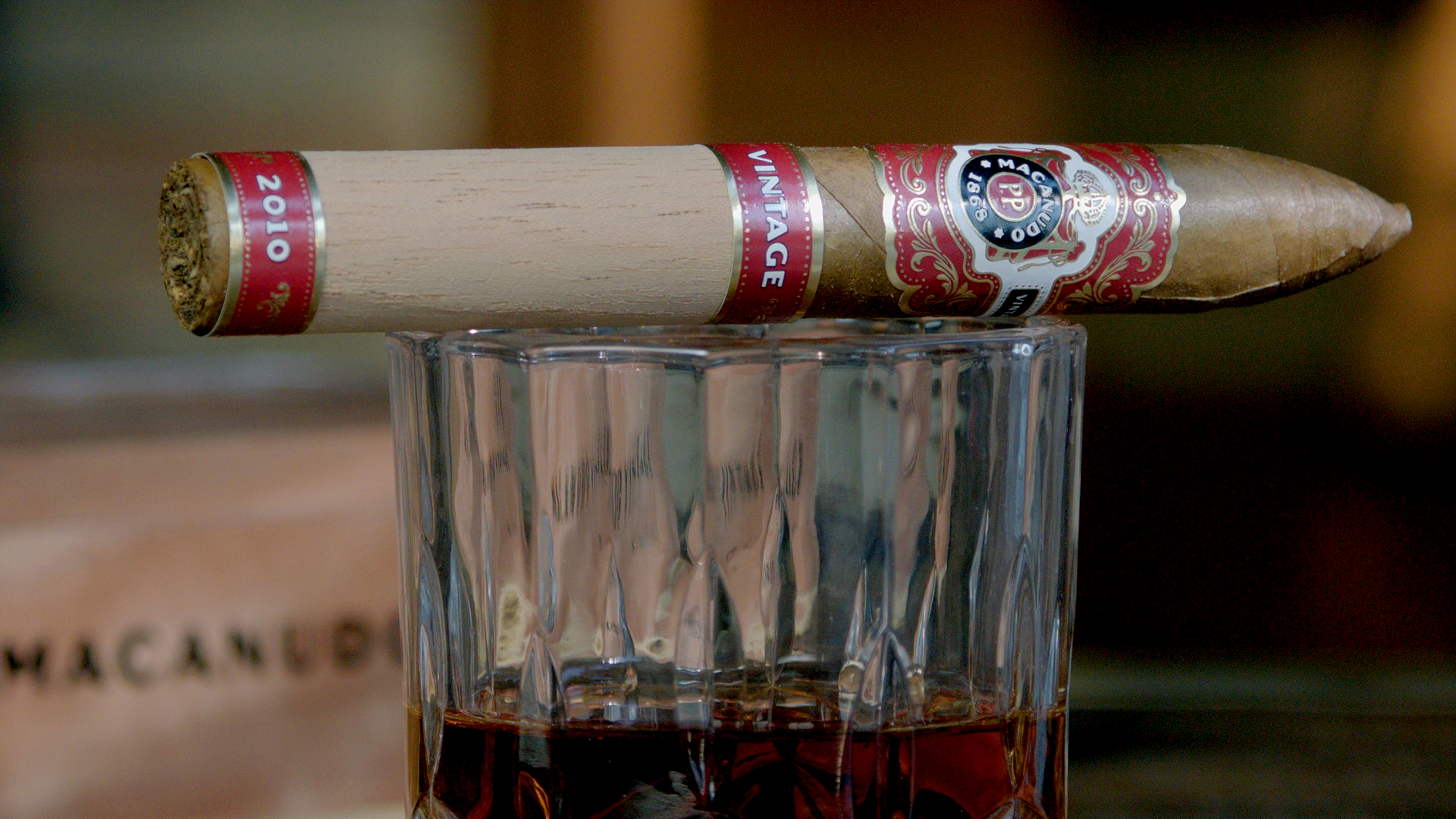 This Torpedo is excellent with coffee if you’d like a fancier morning smoke. But in honor of its rich Dominican history, a good Dominican rum like Brugal would do right by this cigar if you’d like a more mellow after dinner constitutional. For more combinations, see our Cigar & Spirit pairing guide.

Are Macanudo Vintage 2010 cigars worth smoking?

Based on the number of Macanudo Vintage cigars I’ve smoked over the years this one was among the more impressive for its overall performance and perfectly-aged tobaccos. I also liked the out of character use of Honduran tobaccos. It all amounted to a well-balanced and very refined smoke with a mellow character and a medium body. As I said in the video, if you’ve acquired a palate for medium-full to full-bodied cigars this Mac will be like going from 95 MPH down to 55.

Suffice it to say… the Macanudo Vintage 2010 will give you a good picture of how a true vintage Connecticut cigar tastes. I enjoyed revisiting that classic Macanudo panache from back in the day. And when you consider the price for a vintage cigar of this caliber, which I thought would be higher, it’s a pretty good value.