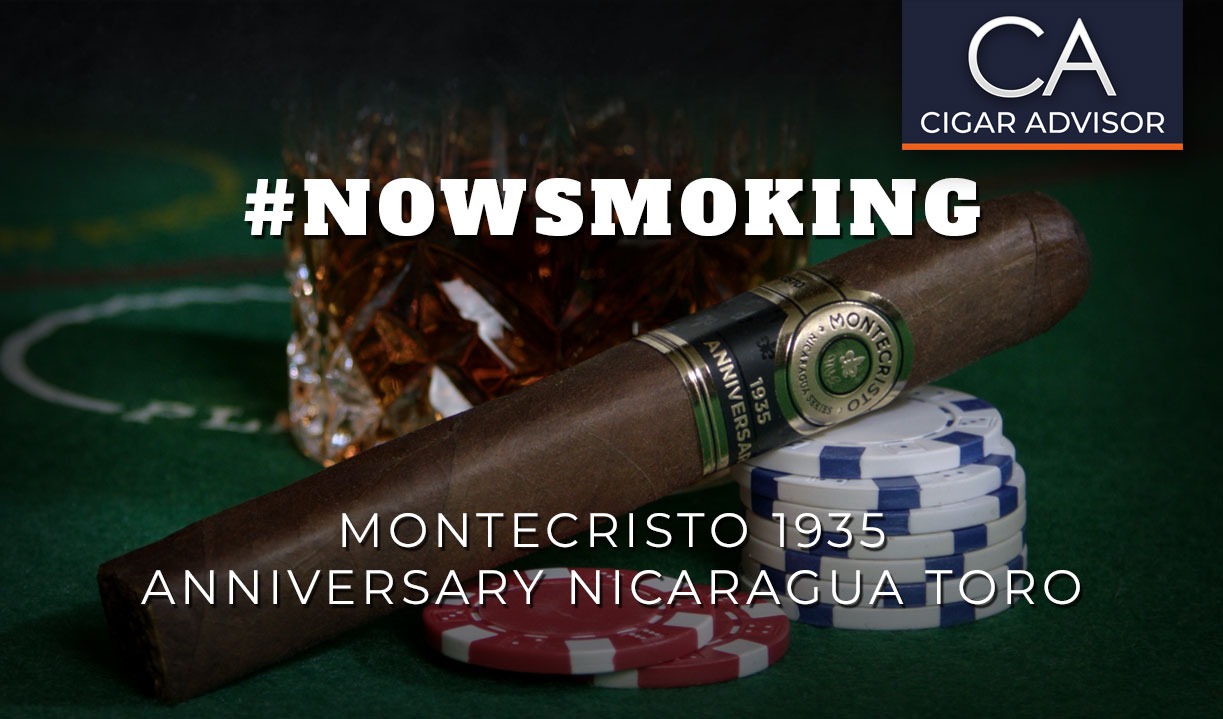 Presented in Boxes of 10, 5-packs and singles (as available)

The Montecristo 1935 Anniversary Back Story

Given its rich Cuban cigar history, some may assume that Montecristo cigars have been around since the late 19th century like many other Cuban brands. Actually, the first Cuban Montecristo cigars arrived on cigar store shelves in 1935.  Those original Montecristos used a “signature blend” of tobaccos created by Alonso Menendez,  which became the standard for the brand. The smoke was very rich, balanced, and very refined. 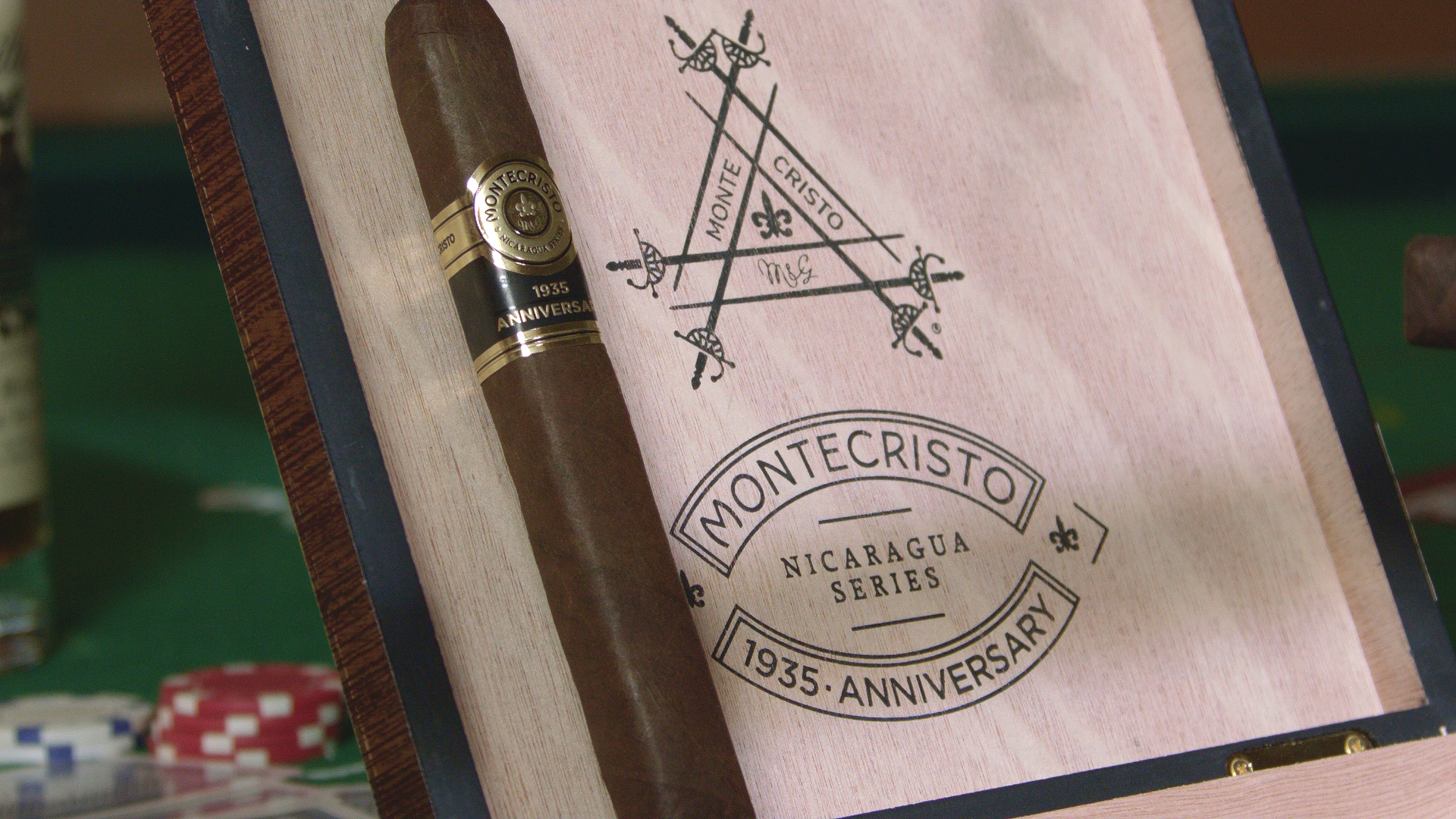 Now, 85 years later, the Montecristo 1935 Anniversary Nicaragua selection reveals a first-ever interpretation of the original 1935 blend that made Montecristo the iconic brand it is today. That’s quite a challenge – especially when you’re attempting to recreate a vintage Cuban puro with Nicaraguan tobaccos. 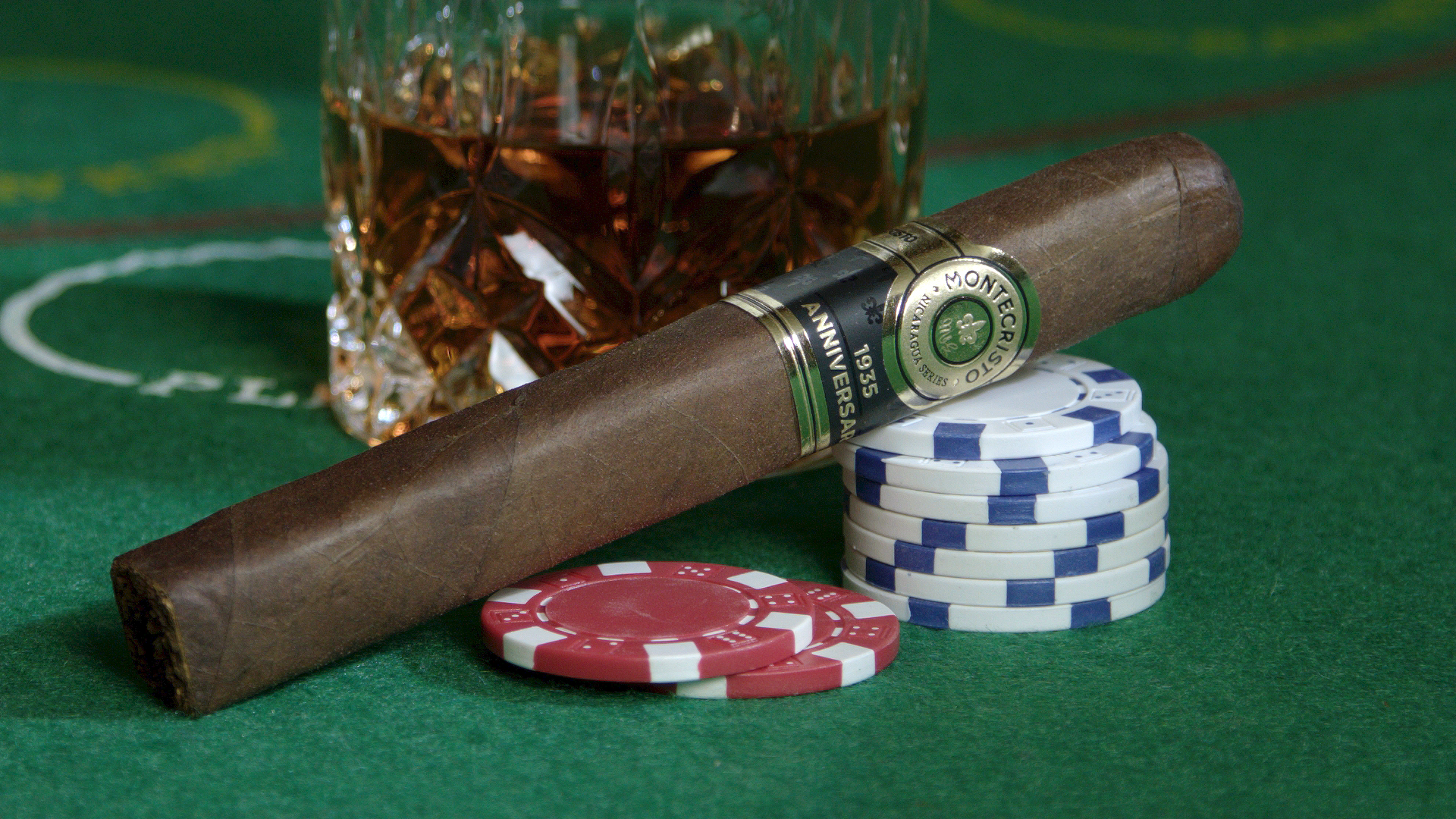 To accomplish this, Tabacalera USA assembled a cast of some of the world’s leading tobacco experts: Rafael Nodal, the Grupo of Maestros, and AJ Fernandez. The goal: Find a precise and proprietary blend of aged tobaccos that pays homage to the original tobaccos used in those first Montecristos. After digging through a forest’s-worth of tobacco leaves, the final blend was not a literal recreation of the Cuban version; rather, it convincingly reflected the classic characteristics, construction, and balance of the original 1935 Montecristo. 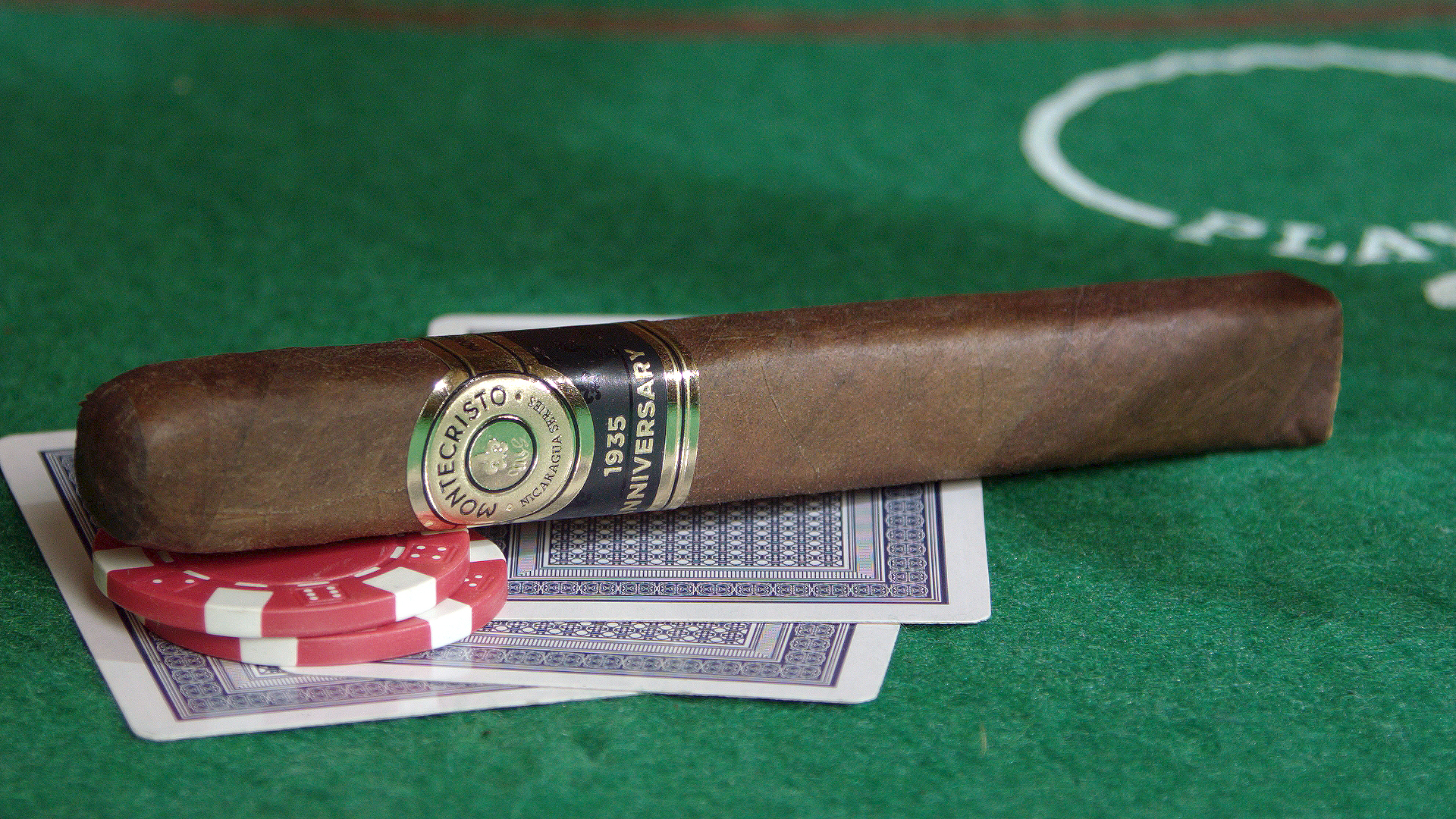 “To honor the age-old tradition of box-pressing cigars, the Montecristo 1935 Anniversary Nicaragua will be introduced as a soft-pressed series in four sizes,” said Rafael. “The cigar offers a luxury showcase from seed to smoke that combines classic craftsmanship and extra-aged estate tobaccos from Nicaragua’s best growing regions.”

In addition to the Toro reviewed here, Montecristo 1935 Anniversary Nicaragua cigars are also available in the following sizes:

Construction: Beautifully rolled, box-pressed, and sealed with a seamlessly applied triple seam cap. The fine-toothed wrapper has a very rich, oily appearance, and is virtually blemish-free. The box pressing helps the cigar feel comfortable in the hand. No soft spots or protruding veins were present.
Cold Draw: Clipped with a double blade cutter, the draw had just the right amount of pull, issuing flavors of cocoa, coffee, and some tobacco sweetness.
Toasting and light: Not a problem. Foot takes to flame fairly easily. Smokers should toast this cigar slowly to caramelize the flavors. First few puffs were mostly earthy and peppery.
Base flavors: Earth, nuts, sweet and peppery spices, charred oak, black coffee.
Aroma: Sweet.
Retrohale: Very smooth and lightly spicy.
Burn & Ash: Just about perfect. The burn required no touch-ups, and the ash was mostly grey and impressively firm. 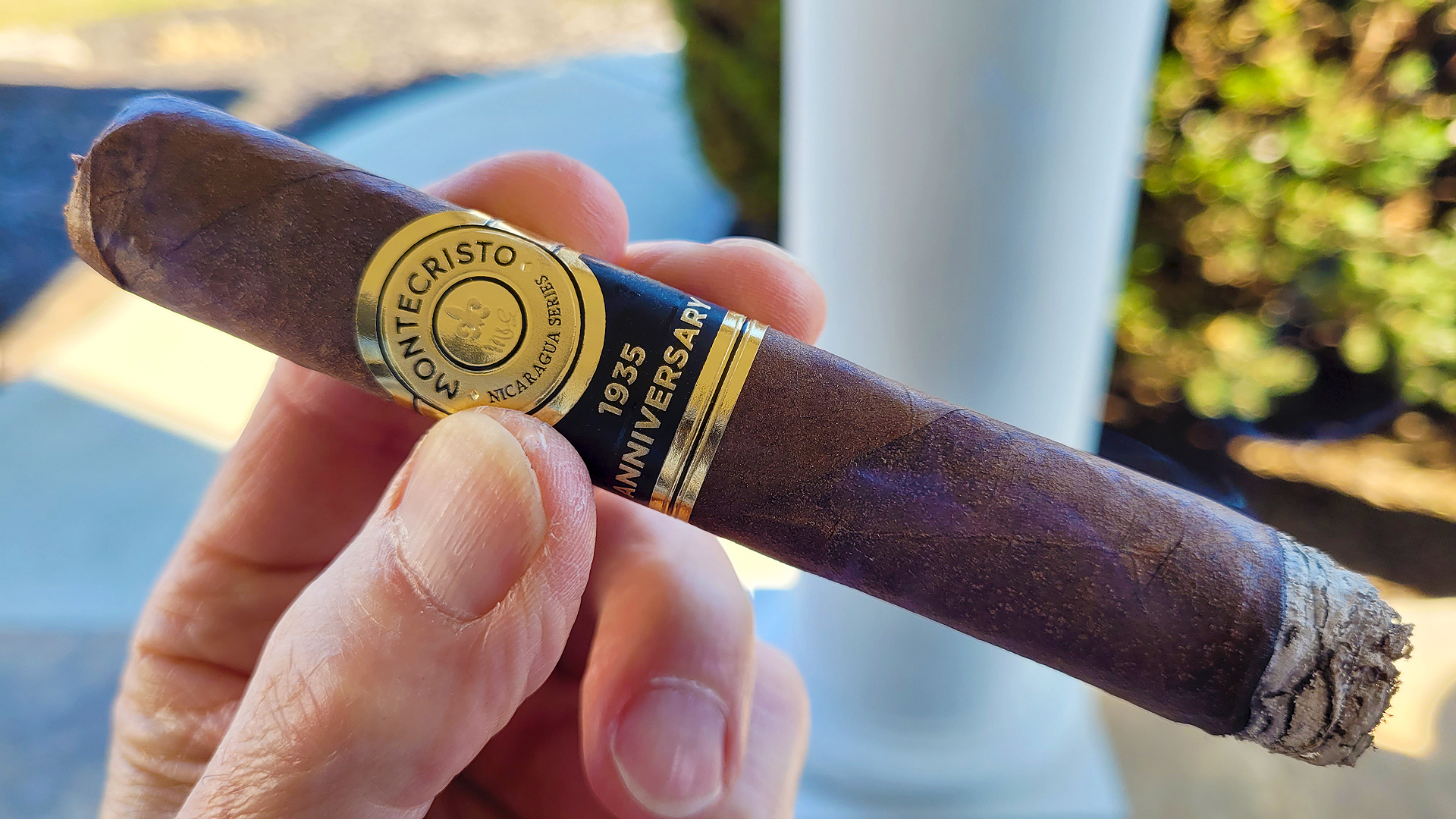 The first several puffs offered a flash of earthy-peppery smoke that went right up my nose. After that very dark, earthy start, the cigar rounds out fairly quickly, transitioning to a much sweeter flavor with a combination of sweet tobacco and a little terra firma. Once you hit the one-inch mark, the cigar finally settles down even further to a medium–bodied mix of earthiness, nuts, pepper and sweet spice. Near the end of this section, the pepper subsidies for a smooth, refined smoke laced with flavors of earth, nuts and an underlying sweetness.

The burn is excellent so far, too, revealing a pretty firm grey ash. Nice aroma, too. 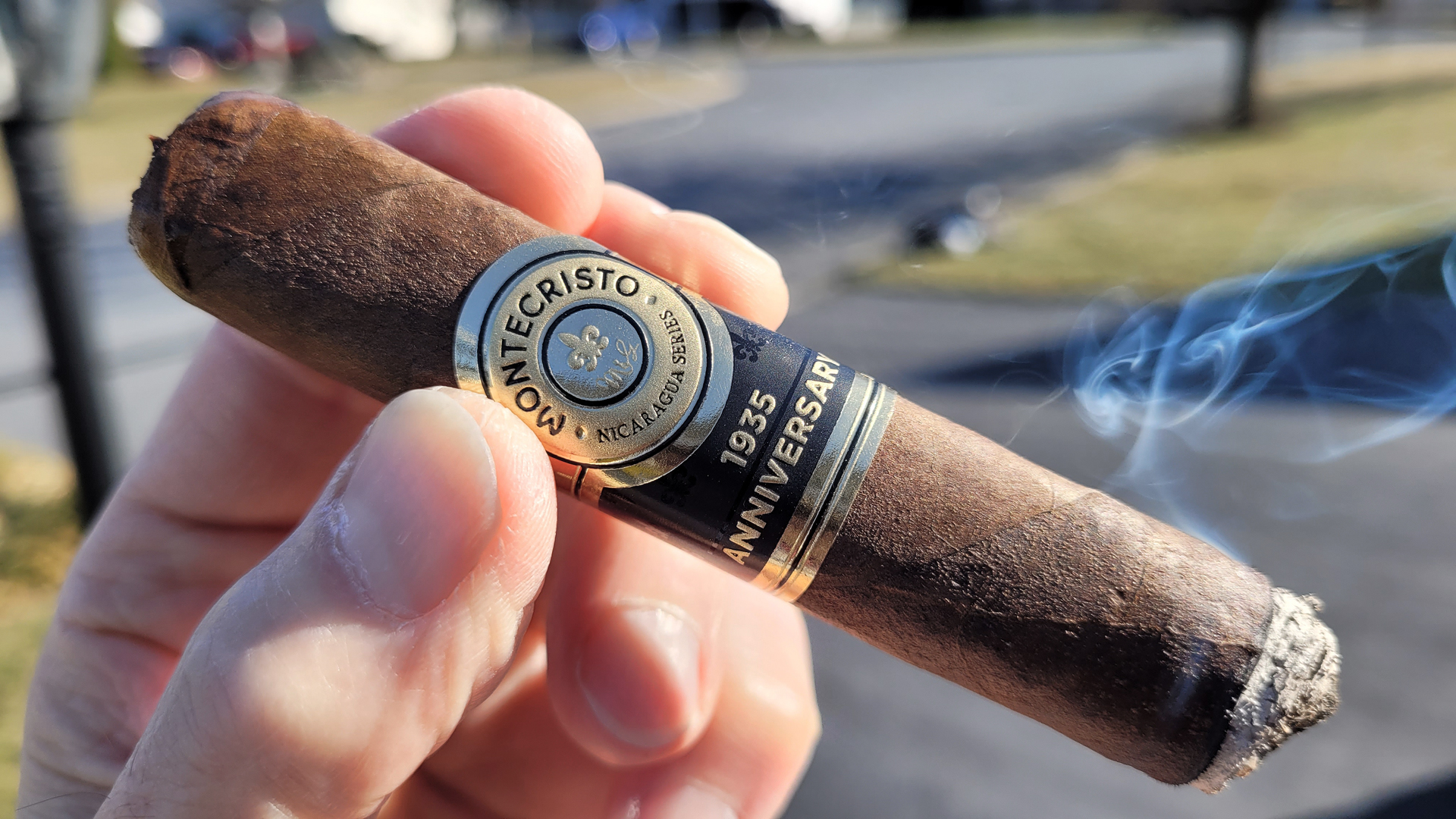 Almost a mirror image of Act I, except the pepper has left the building, but for a little remaining on the finish. At this section the cigar reveals some additional sweetness and spice, while the layers of nuts and earth remain intact. Yet, here some charred oak chimes in. I’ve also begun to notice how much rich, dark tobacco flavor this cigar has. (If this is what the 1930s era Montes tasted like, they must’ve been mighty fine.) The body is more medium–full, but the strength is tilted toward full. We have now reached the proverbial “sweet spot.” 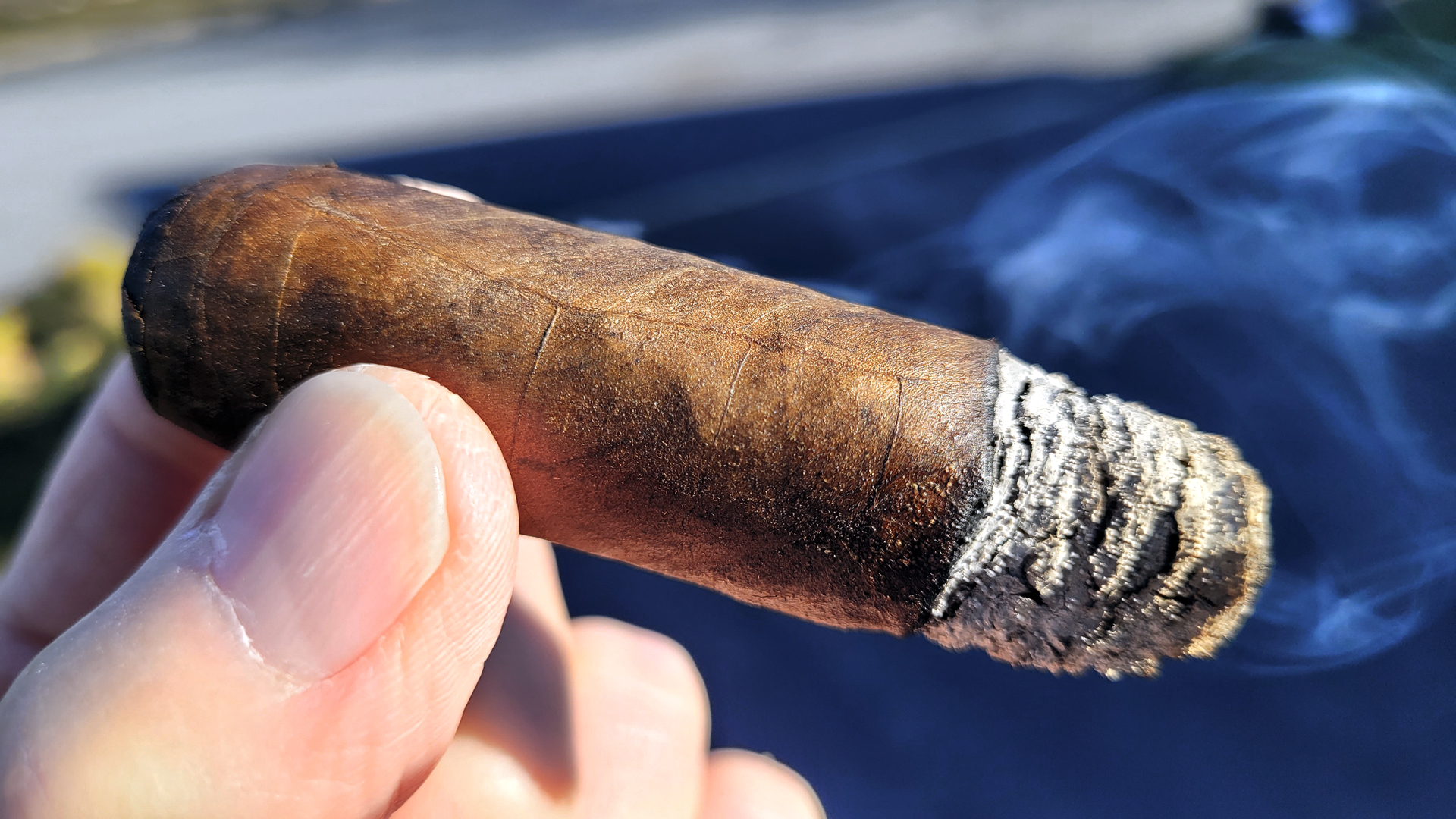 Still very smooth, and much more savory.  The body and strength are now full, but not heady. The smoke is still very tasty, not peppery or bitter, while the core flavors remain fairly well-defined. A hint of black coffee sneaks in, too. Add in the sweet spices, oakiness, nuts, and earth and you’ve got a stealthy, well-balanced cigar. 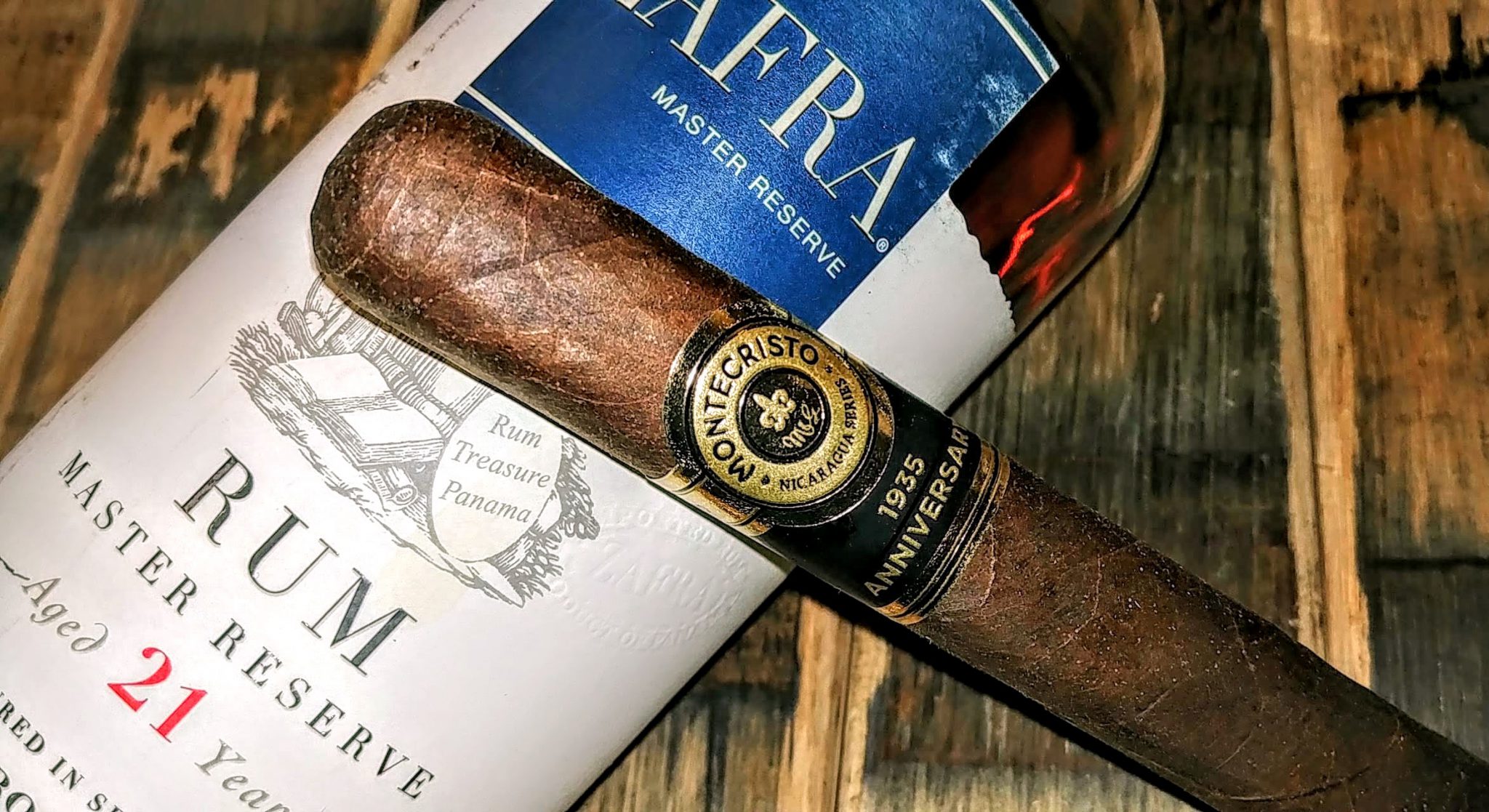 Our whiskey expert suggested Blanton’s Original Single Barrel for its caramel sweetness and notes of citrus, oak, and baking spices. We also like Willet Straight Rye cask strength shown in the video. Willet is a robust rye with dark cherry, burnt vanilla, spices, and a weighty mouthfeel. But I tend to like rum with such “Cubanesque” cigars. Zafra Master Reserve 21 has a pleasant fruity aroma with a hint of wood. The flavor has just the right amount of sweetness with a hearty oak taste. You can’t miss with any of these. 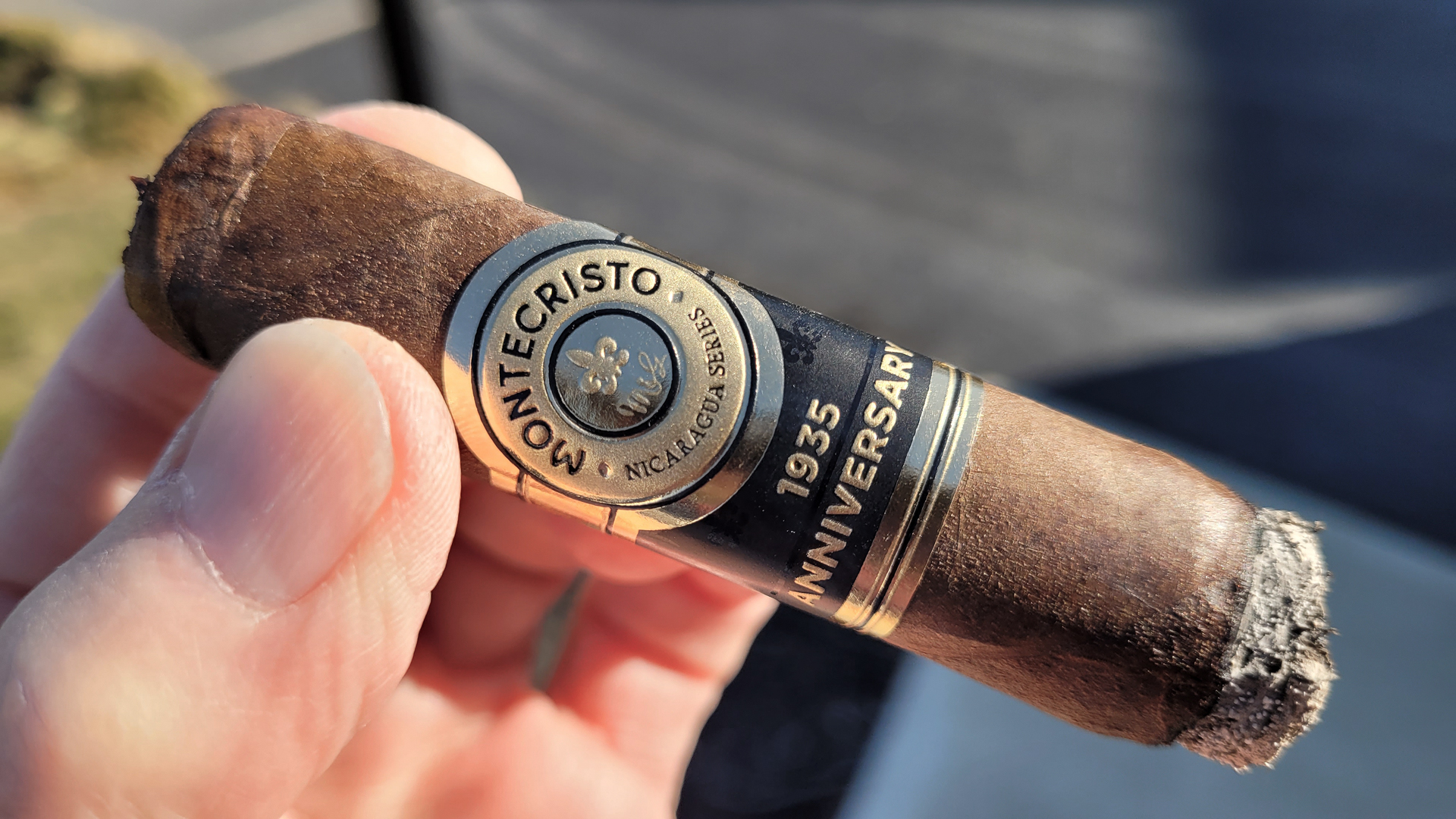 What we have here is a juggernaut of flavor and complexity. It’s pretty obvious that Rafael, the Maestros, and AJ went all out on this anniversary cigar. Trying to recreate a profile similar to the 1935 original Montecristos had to be excruciating. It’s one of the more outstanding aspects about this cigar, and a testament to the kind of tobacco growing, fermentation, and aging they can do these days. This Toro also had a certain character I haven’t found in many other “domestic” Montecristos. So, it’s a winner. The Montecristo 1935 Anniversary Nicaragua Toro may be a little bold for some since I think this cigar requires some cigar smoking experience to truly appreciate it. All-in-all, a well done and humidor-worthy cigar, since it will improve even more with a little added rest.

Reading Time: 4 minutes April showers may bring flowers, but this Spring Top New Cigars brings a downpour of flavor…See our list of six sparkling new-to-you boutique smokes you should add to your humidor…