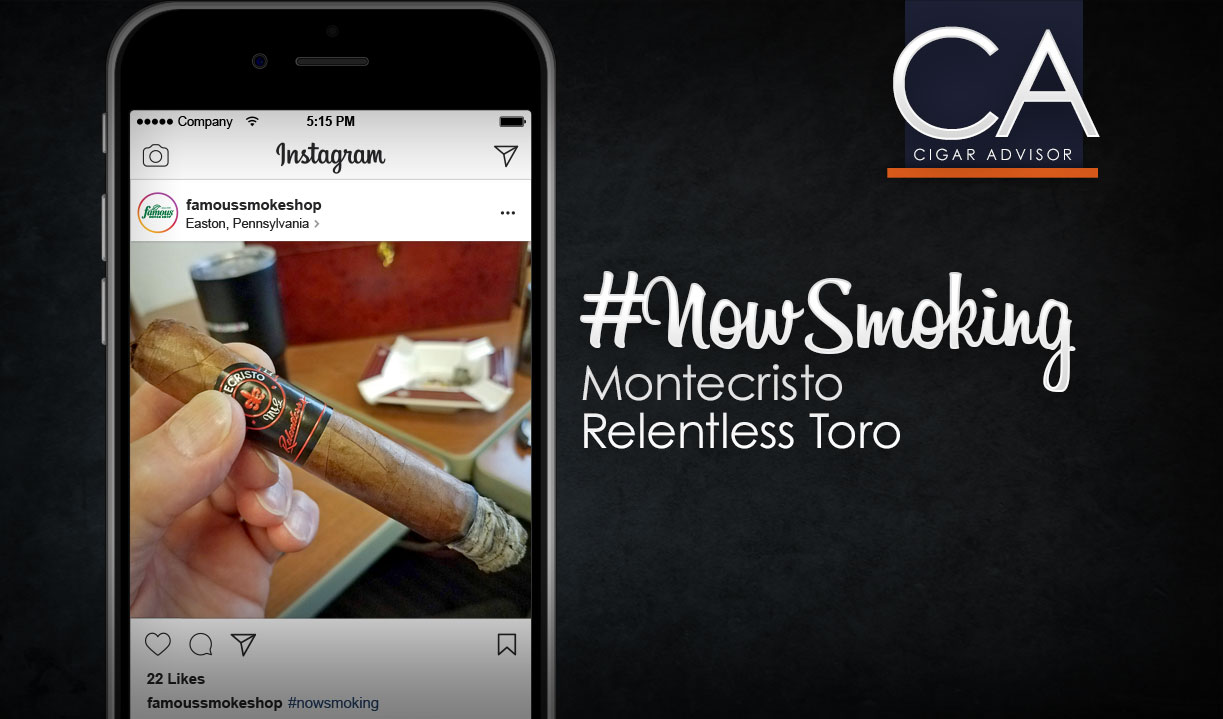 Construction: Well-packed with a nice feel in the hand. The Rosado wrapper was oily, even in color, and reflected a subtle glint of rust in the patina. Some veins were visible, but did not protrude like they were embossed. The feel of the wrapper was silky, and the cap was skillfully applied.
Pre-light: Leathery and a little salty with a good draw.
First few puffs: Aromatic and sweet, with some leather and salt as in the pre-light.
Base flavors: Cedar, leather, nutmeg, cinnamon, roasted coffee, light peppery spice.
Aroma: Spicy.
Burn / Ash Quality: The cigar burned slowly, and evenly, too, exposing long firm ashes that surrendered to gravity at about one inch apiece.
Retrohale: Creamy, and slightly peppery with a hint of coffee.
Balance of flavors: Excellent.

My Montecristo Relentless Toro started out mellow with notes of cedar, nutmeg, and some additional nuances of sweet spice. The smoke had a good amount of volume with a dominant note of cedar. Some of the smoke worked its way into my nose from the outside, causing a peppery sensation which, combined with the cedar, was actually quite pleasant. 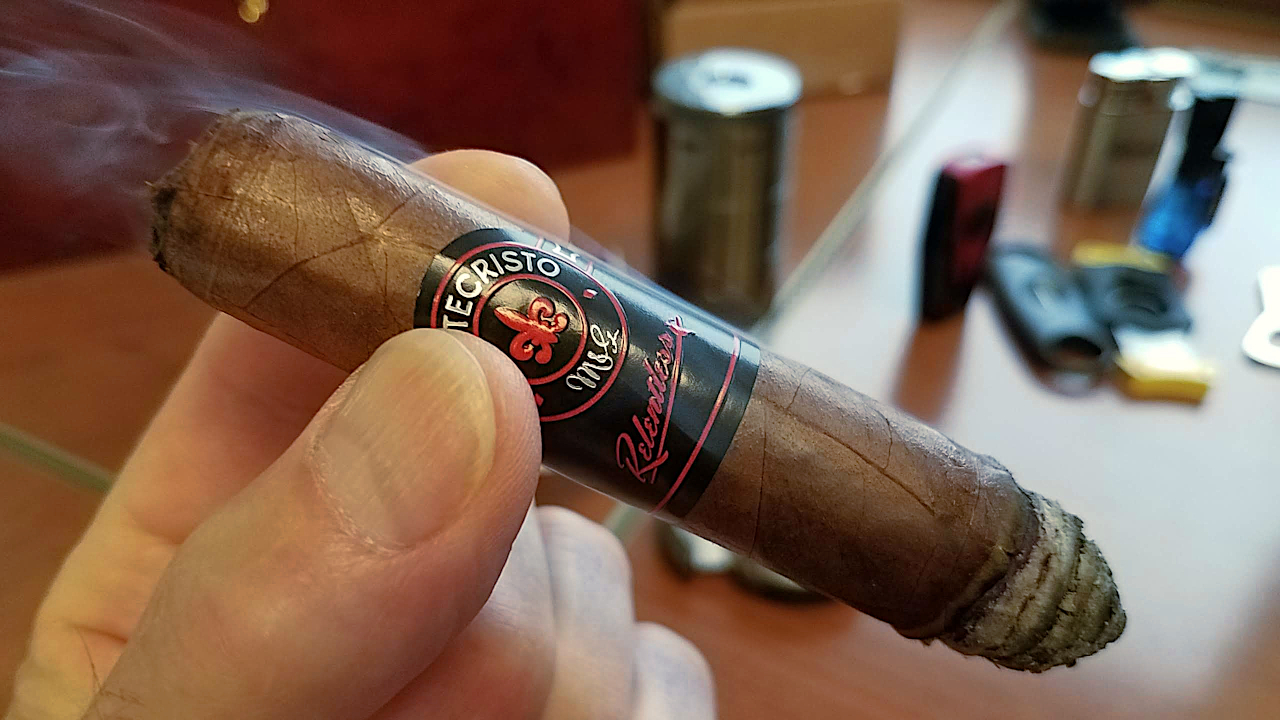 Still creamy and mostly cedary, with a dry, medium-length finish. The body shifted to straight-up medium, while the strength remained somewhere between mellow and medium. Notes of sweet spice continued to sidle along in harmony when the first change-up revealed itself. The smoke became appreciably sweeter, too, for a combination of cedar and sweet spice on a medium-dry finish. 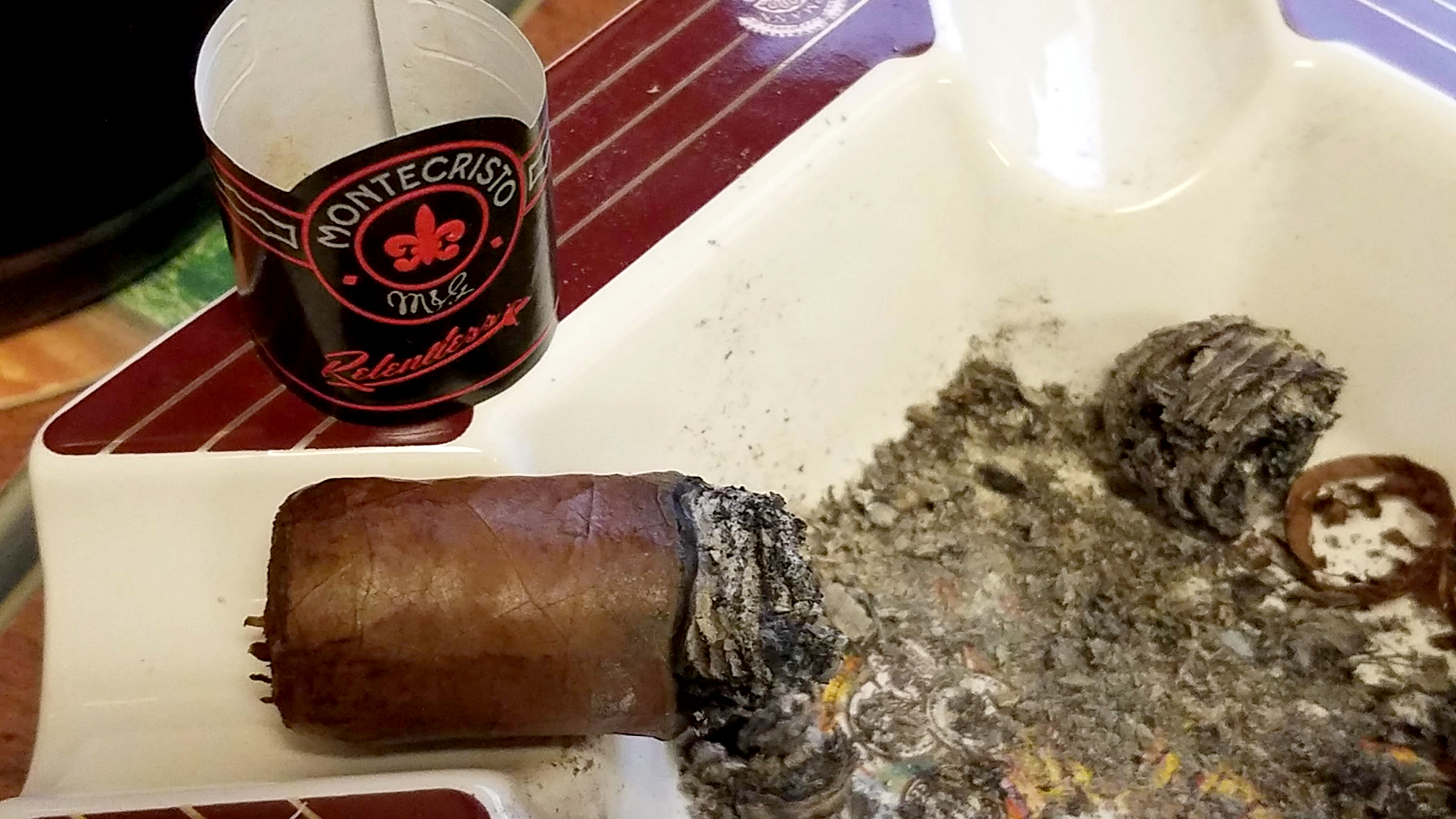 The cigar remained medium in body, while the smoke became much more copious. Cedary notes continued to prevail. Light peppery spice followed, underscored by nutmeg, cinnamon, and a new entry—roasted coffee. Another twist to the plot came just before getting into nub territory, imparting a bitter hoppy flavor and an earthy, mineral-like aspect.

Speaking of the nub, at that point, I realized that this cigar was quite stealth. It even caused me a little headiness. (Must be the Ometepe.)

Suffice it to say. . .  The Montecristo Relentless Toro is a well-built Nicaraguan puro with excellent attributes: Easy draw, superb balance, and pleasantly complex, with a well-balanced array of earthy, woody, and spicy flavors. A satisfying selection for both new and experienced cigar smokers, this Toro retains a mostly medium body, while providing a “fuller” smoke in strength (mostly in the final stage). Plus, at a few pennies over $12 (at press time), the Toro provides a long, savory smoke with plenty else to keep you interested. Taking all that into consideration, and the fact that it’s a Montecristo cigar in every respect, the Relentless Toro is a mighty, humidor-worthy value.

Reading Time: 3 minutes Gary and John are #nowsmoking the big RGs, for this Oliva Nub Cameroon cigar review. It’s our first Nub in quite a while – and it led us to some compelling conclusions. Watch our review now!

5 Cigars That Made My Career: Rafael Nodal