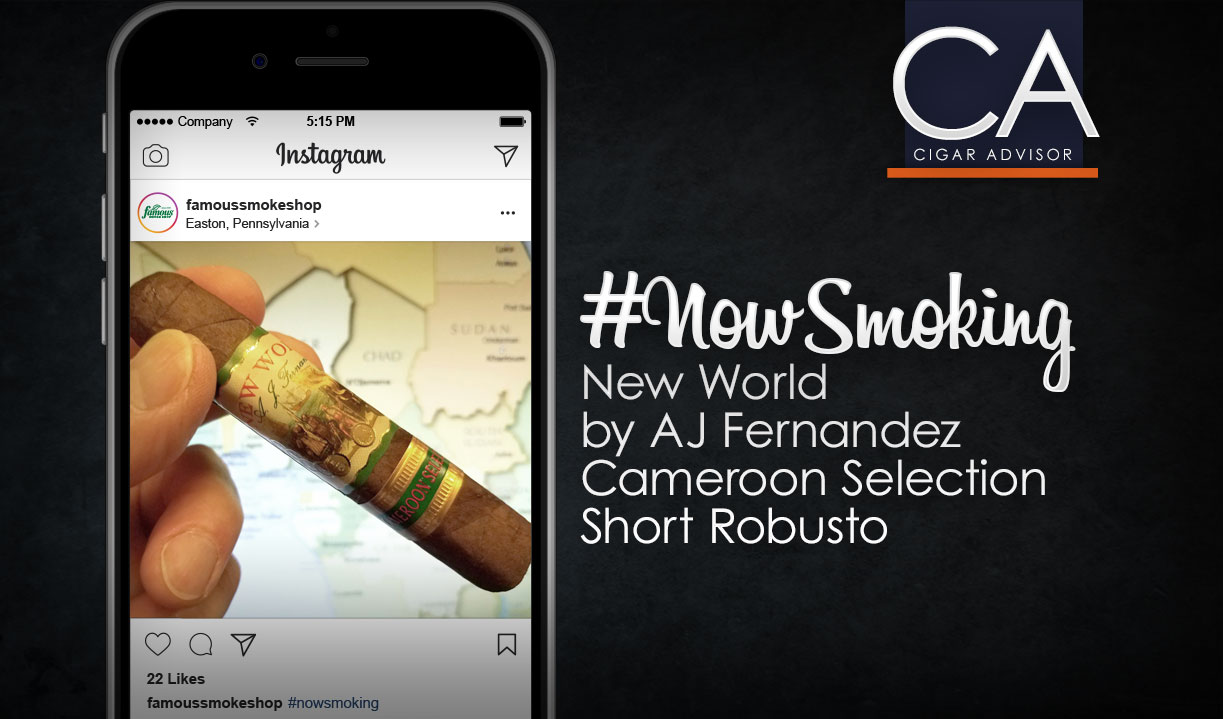 Where it’s at: The New World Cameroon Selection marks the first time AJ Fernandez and his father, Ismael, have ever blended a cigar with a Cameroon capa. I rarely smoke anything shorter than a Rothschild, but as a fan of African Cameroon wrappers, I was really looking forward to this pocket-sized smoke. Interestingly enough, the Short Robusto actually looks shorter than four inches. This may be due to the double bands which take up most of its length.

The pre-light was a mix of sweet tobacco and leather – so far, so good! Using a single jet torch lighter, once flame was applied to the foot, the tobaccos took easily for a perfect light. A shot of sweetness was quickly overpowered by a more dominant mix of earth and pepper, which almost as quickly rounded out to a well-balanced, medium-bodied mix of earth, sweet spice, and cedar.

Due to this cigar’s shorter dimensions, I quickly realized that long draws should be avoided. They not only hastened the burn, but there was the chance the cigar could quickly go bitter on me. The slow and easy drag was the way to go, which paid off in a perfectly-balanced brew of sweet spice, earth and cedar with some white pepper lingering on the long finish.

The sweetness was especially prevalent at the mid-stage, which I attributed to the wrapper. And boy, did AJ and Ismael pick a good one. Of all the Cameroon cigars on the market, I’ve only found a few to be outstanding. The Arturo Fuente Don Carlos Selection and Rocky Patel Vintage 2003 are prime examples, and the capa on this New World Cameroon was equally extraordinary. It’s also not as delicate as some other Cameroons, which was proven by no tearing when I removed the top band.

Moving into the final third – about 40 minutes in – the smoke segued to more earth and pepper dominance as the sweetness faded. There was also a greater volume of smoke, and the retrohale offered more of a woody quality than the usual pepper snap.

All-in-all, the New World by AJ Fernandez Cameroon Selection Short Robusto was a pleasure, and finishing at almost one hour, was NOT your typical “short smoke.” I left less than an inch in the ashtray, and I’d really like to try the 7″ x 48 Churchill in this series on my next go-round. AJ disciples will, no doubt, enjoy this cigar for its deep flavor and complexity – and that goes for just about any cigar smoker who has acquired a taste for the best Nicaraguan cigars.

Reading Time: 3 minutes February is here, and with it new cigars from Rocky Patel, Tatuaje, Asylum, and more. Click here to find out which ones were made for your taste buds!