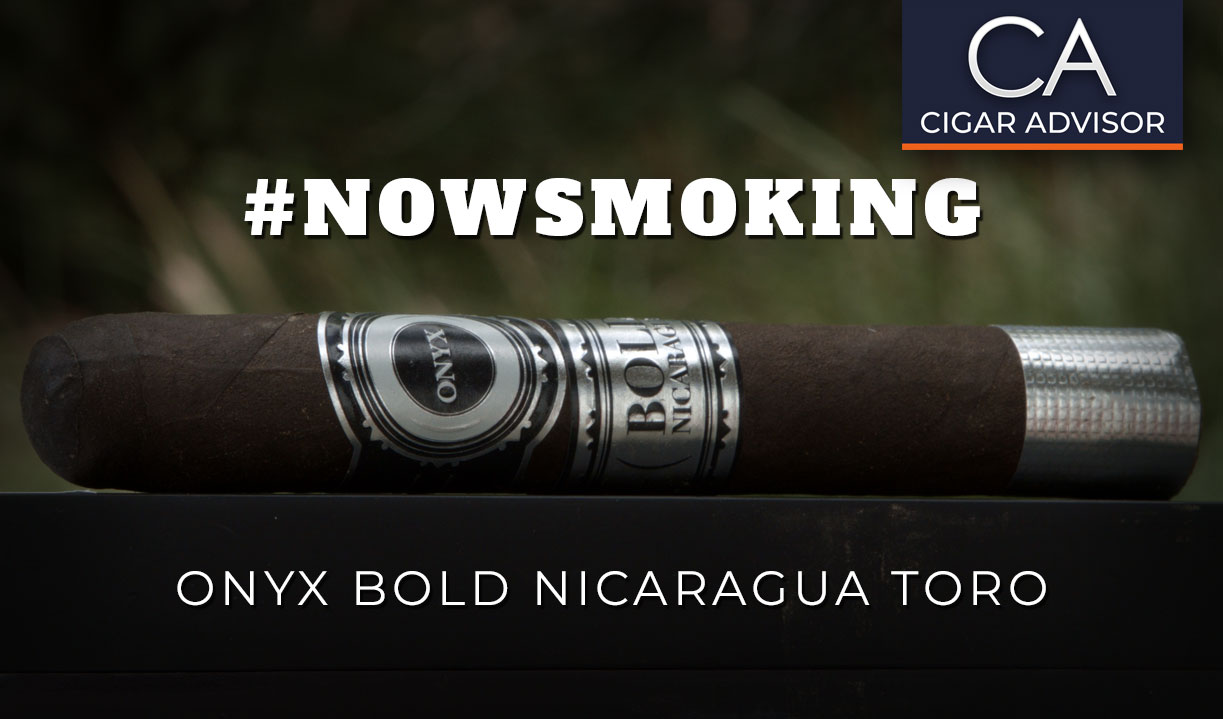 In another classic brand line extension, Onyx Bold Nicaragua cigars have arrived with a blend that ‘dares to be bolder.’ And once again, Tabacalera USA’s Head of Product Capability, Rafael Nodal, and AJ Fernandez are at the wheel.

“Onyx Bold is the much anticipated follow up to the award-winning Onyx Reserve, which boasted an impressive 94 cigar rating from Cigar Aficionado when it was first introduced,” said Rafael. “Handmade at the AJ Fernandez factory in Nicaragua, it brings a meticulously fermented dark, San Andres wrapper that envelopes a unique blend of Nicaraguan tobaccos aged for more than four years.”

The Evolution of Onyx Cigars

When Onyx Reserve was introduced in 2000, it was a Dominican-made cigar with a Connecticut Broadleaf wrapper, Nicaraguan binder, and a Dominican, Peruvian, and Nicaraguan filler core. One year later, the Onyx Reserve Mini Belicoso scored a “Classic” 94 points in Cigar Insider, which increased the brand’s popularity tenfold and earned it a very dedicated following. (When I first started working at Famous, I often remember Onyx Reserve being out of stock as a result.)

Looking at the original Dominican version, that blend was, in one sense, a harbinger of the brand’s future, in that from the start Onyx leaned toward a Nicaraguan-forward blend, which has been fully realized with the release of the Onyx Estelí and Onyx Bold Nicaragua selections. In addition to being bolder in flavor, Onyx Reserve remains mostly box-pressed, while the other two are all parejo shapes. 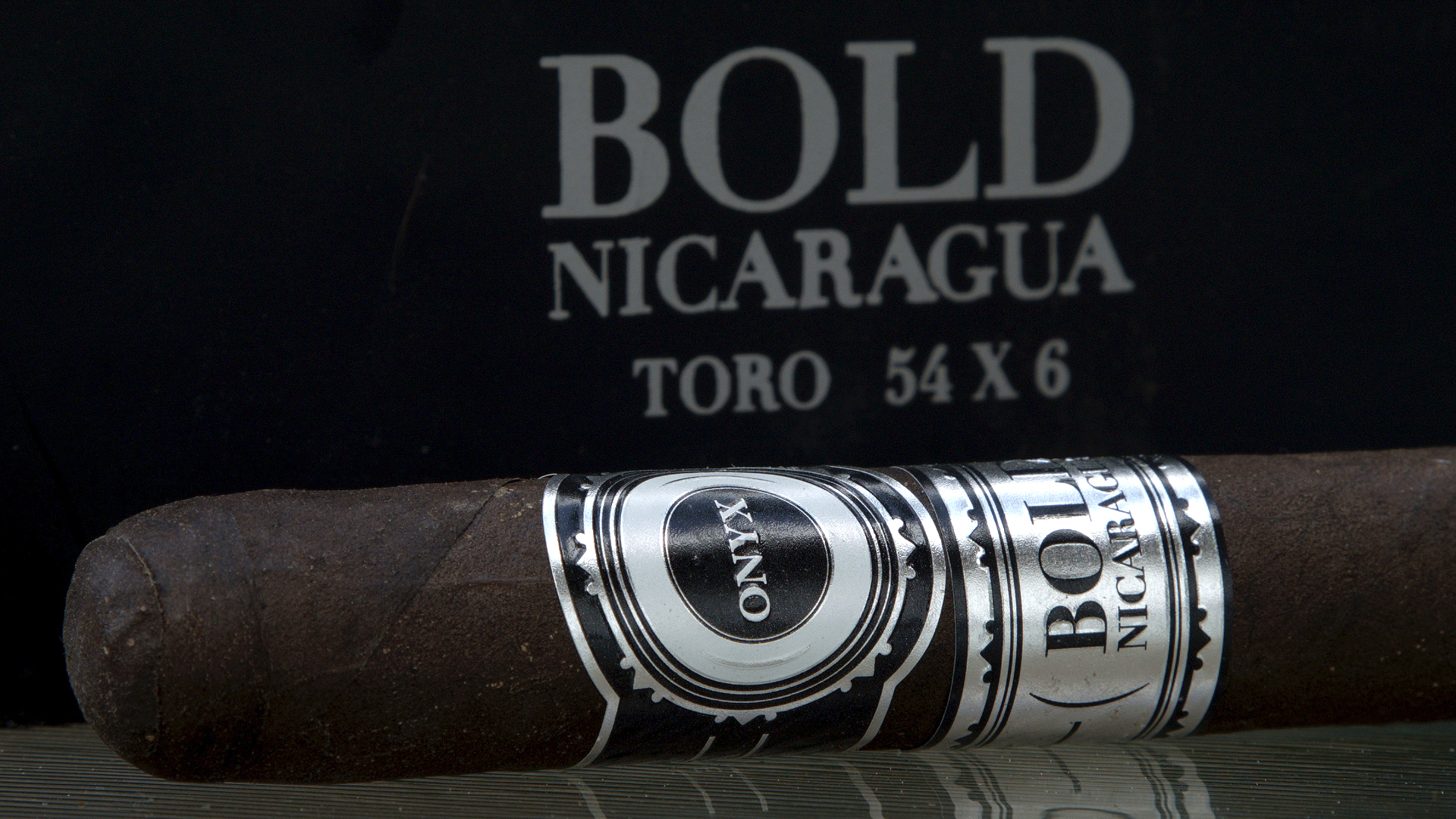 Moreover, Bold Nicaragua shouldn’t be confused with the Onyx Estelí Selección  No.1 I reviewed earlier this year. True, Onyx Estelí has a San Andrés wrapper and Nicaraguan filler, but it also has Honduran Criollo 99 filler and a Sumatra binder.

Handcrafted in three sizes, a 5×50 Robusto, 6×54 Toro, and a 6×60 Magnum, Onyx Bold Nicaragua is made for today’s cigar smoker’s palate which is geared toward more full-flavored blends made with Nicaraguan-grown tobaccos.

Excellently. The wrapper has that classic, “basic black” color for which Onyx is known. The cigar was also well packed and finished with a well-made triple seam cap. The prelight draw was excellent, revealing some saltiness, a leathery note, woodiness and earth. The 6”x54 dimensions also felt comfortable in my hand.

The smoke offers a sweet, earthy, and slightly peppery set of flavors out of the gate. It’s also smooth and creamy with a medium-body early on. By the first inch, the flavors continued to be mainly earthy, sweet, and spicy, and rounded-out nicely. As the Toro continued, the peppery spice seemed to have left, settling the cigar down to a very full-flavored and relaxing smoke. The burn was also outstanding, offering a very firm grey ash that I could tap off at my discretion. 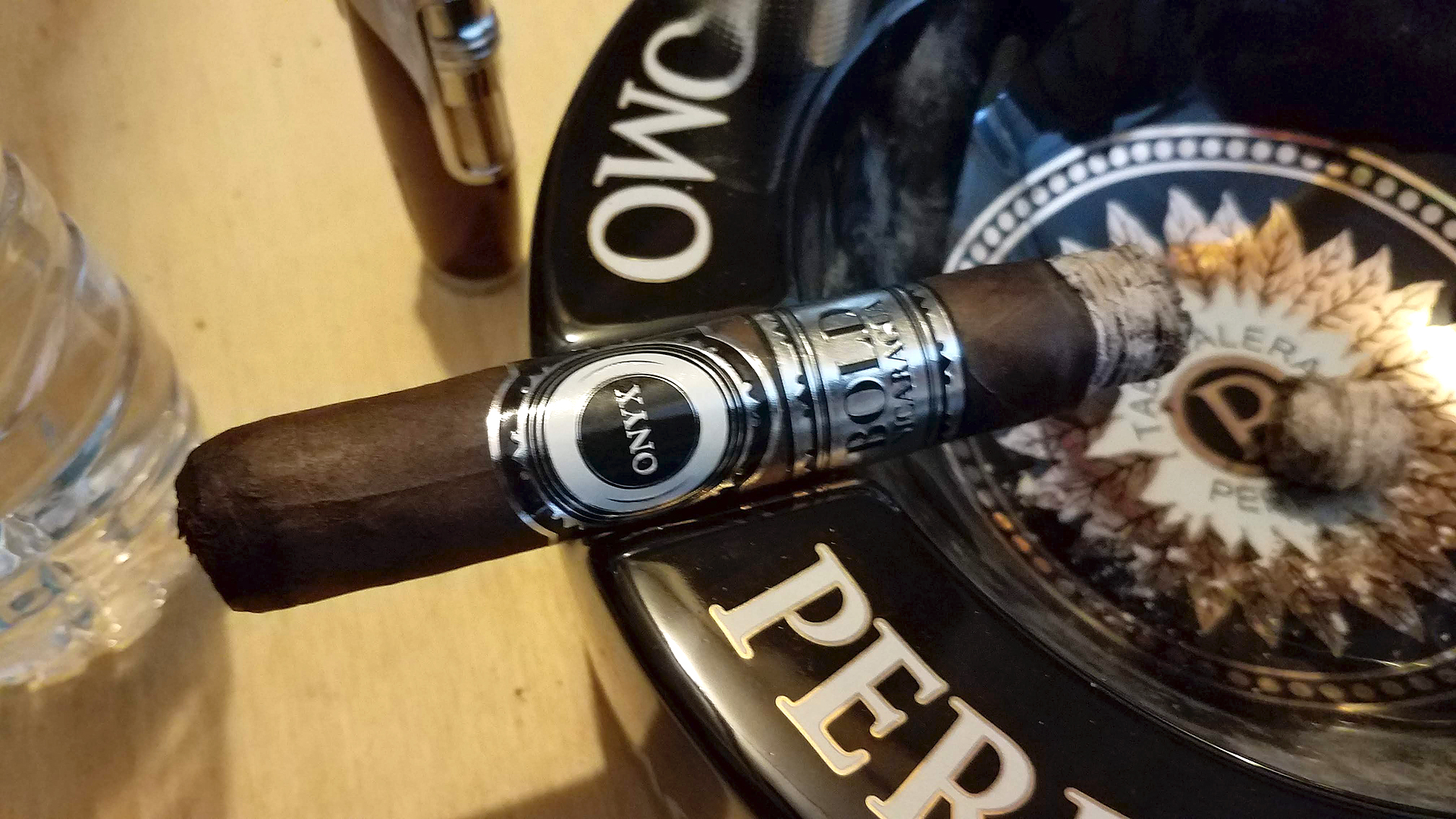 Moving into the midsection of the cigar, some spiciness returns, tips its hat, and exits, only to return again later on. Notes of strong coffee and a hint of dark chocolate entered the fray in the latter half, while the core flavors held steady and the smoke retained a very smooth and refined character. The wrapper appears to be a major contributor in terms of this cigar’s overall profile. And although the Toro lets loose more strength in the final act, it’s the wrapper that keeps it from going over the top. 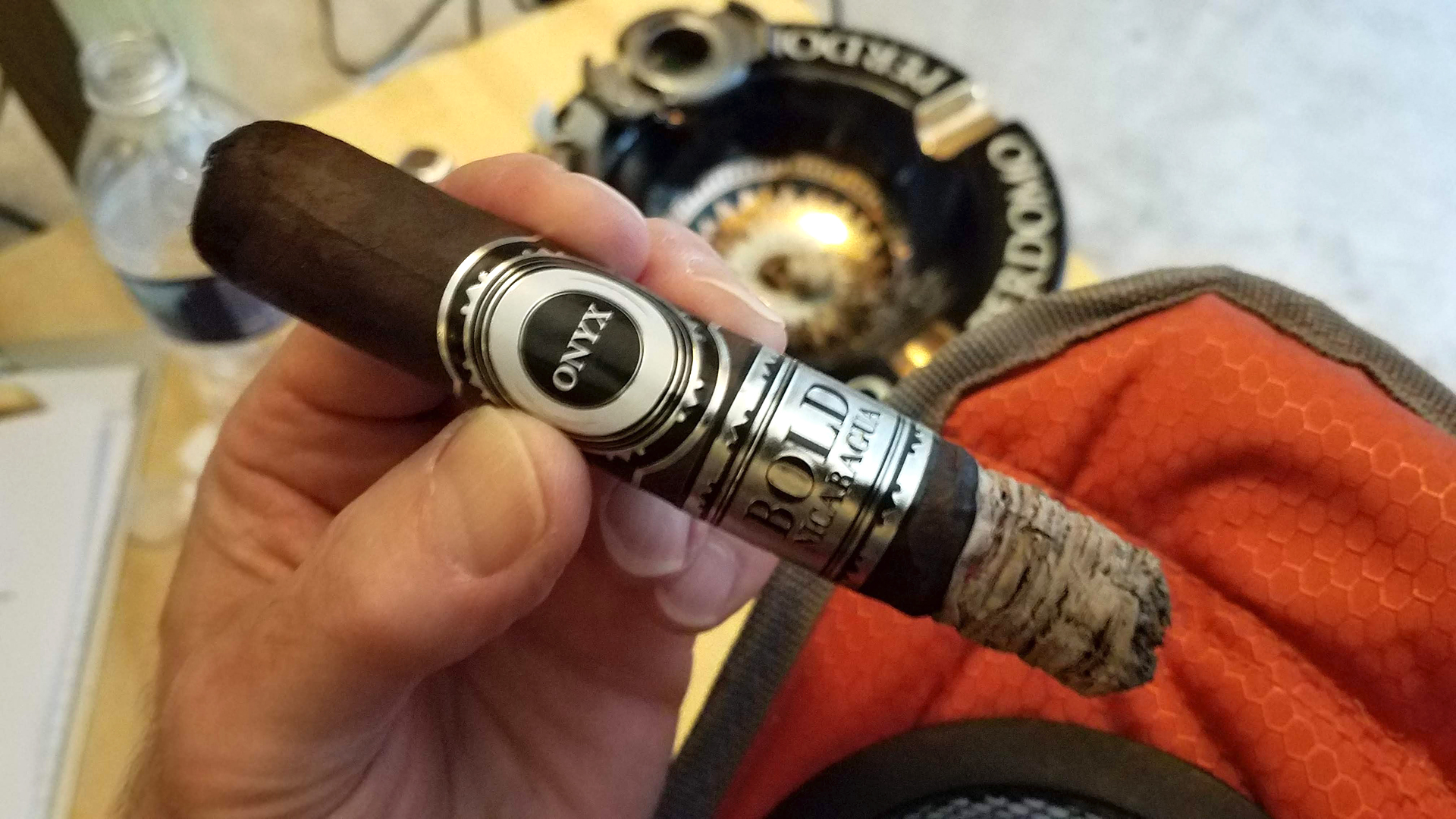 Rich, dark, and well-balanced with dominant flavors of sweet tobacco, wood, and peppery spice. Overall, the smoke is smooth, creamy, and medium to full in body with occasional flourishes of espresso and bittersweet chocolate. 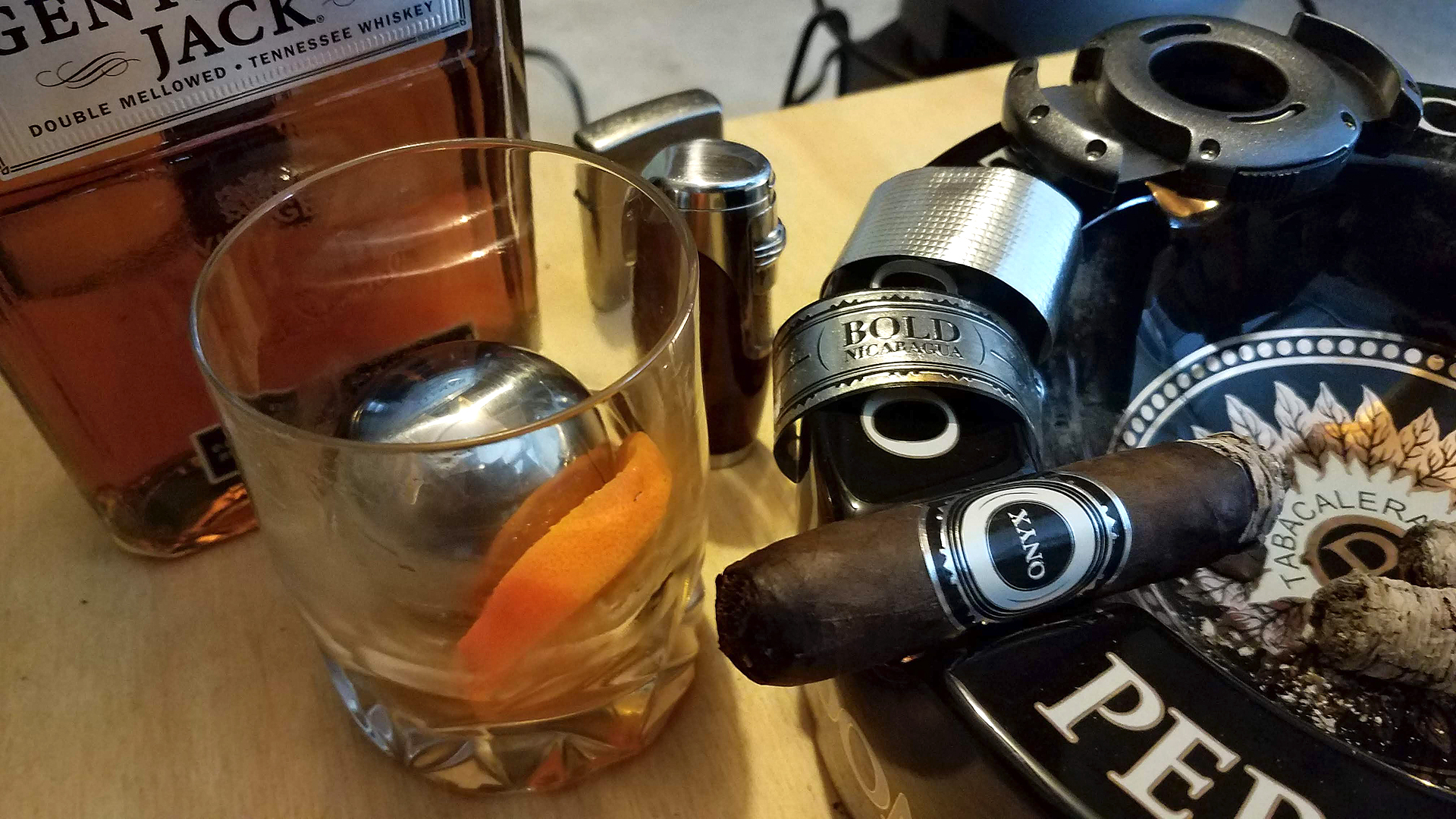 Being that the Onyx Bold Estelí has Nicaragua written all over it, I thought a good bourbon or Tennessee whiskey would make a nice match, so I went with Jack Daniel’s Gentleman Jack. The result was quite good, and the Jack wasn’t overly sweet either, which offered a nice balance between the flavors of both the cigar and the whiskey on the palate. The whiskey also seemed to reduce, and in some cases, even eliminate, the cigar’s peppery flavor. 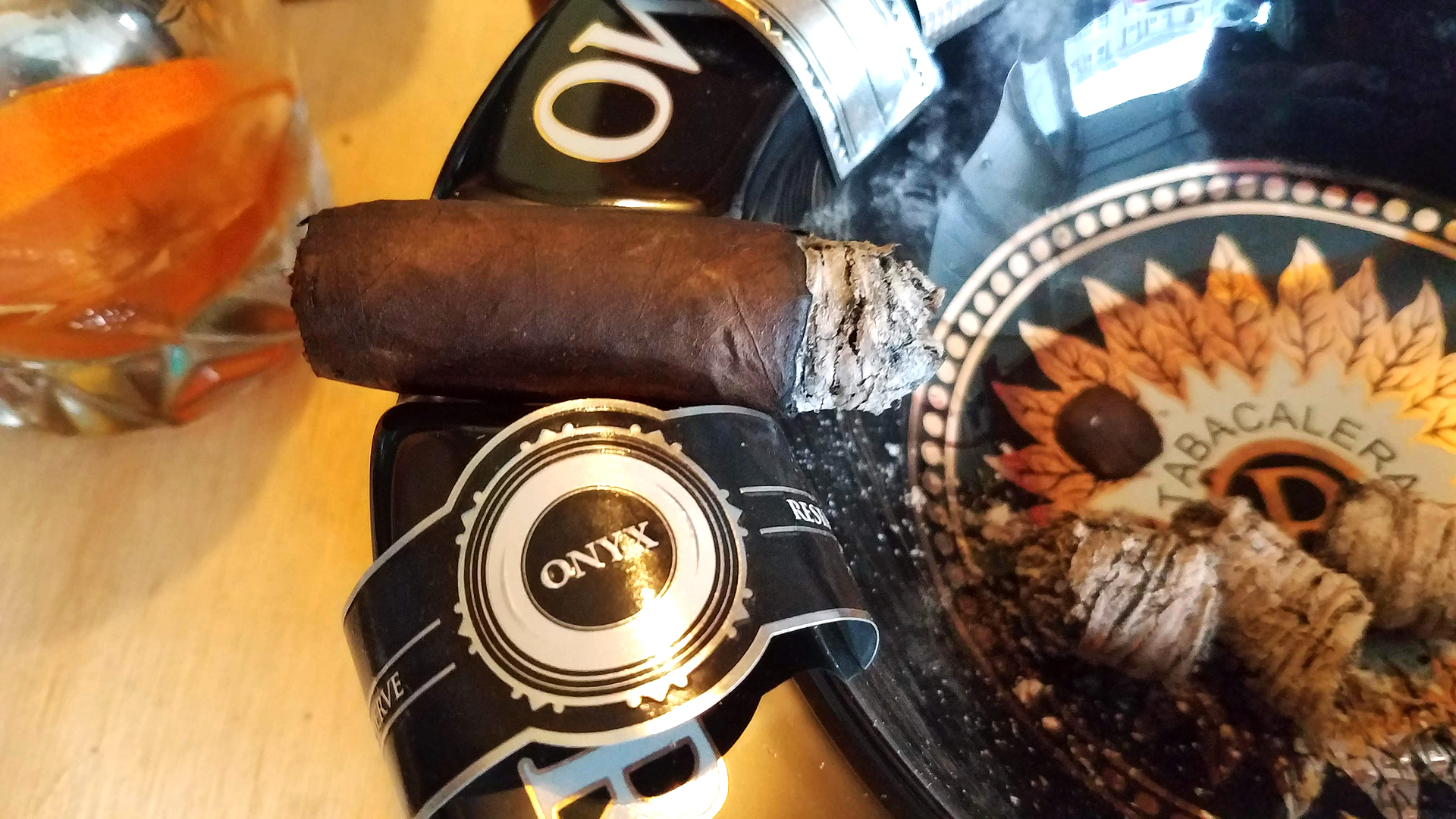 If you have a few notches on your gun belt in terms of experience, you’ll get the most from this blend, which is “bold,” but in a much more refined sense. Although I was surprised AJ and Rafael didn’t go with an all-Nicaraguan leaf blend, the Mexican San Andrés wrapper was an excellent choice. If you love bold, full-flavored cigars, or also happen to be among the Onyx devoted, the Onyx Bold Nicaragua will make a fine addition to your rotation. Plus, for the price point, it’s a pretty good value.

Already wanted to give it a try, but now I can not wait to get my hands on one.

Thanks Dan. Glad the review was able to nudge you into smoking one. ;-)

Read More
Cigar Buying Guides
Looking for new cigars to bring to the golf course this year? We have three great picks from Trinidad, Romeo y Julieta and EPC that will make your next round of 18 great, no matter what your scorecard says. Before you grip it and rip it - grab these new additions for your travel humi today!
Read More