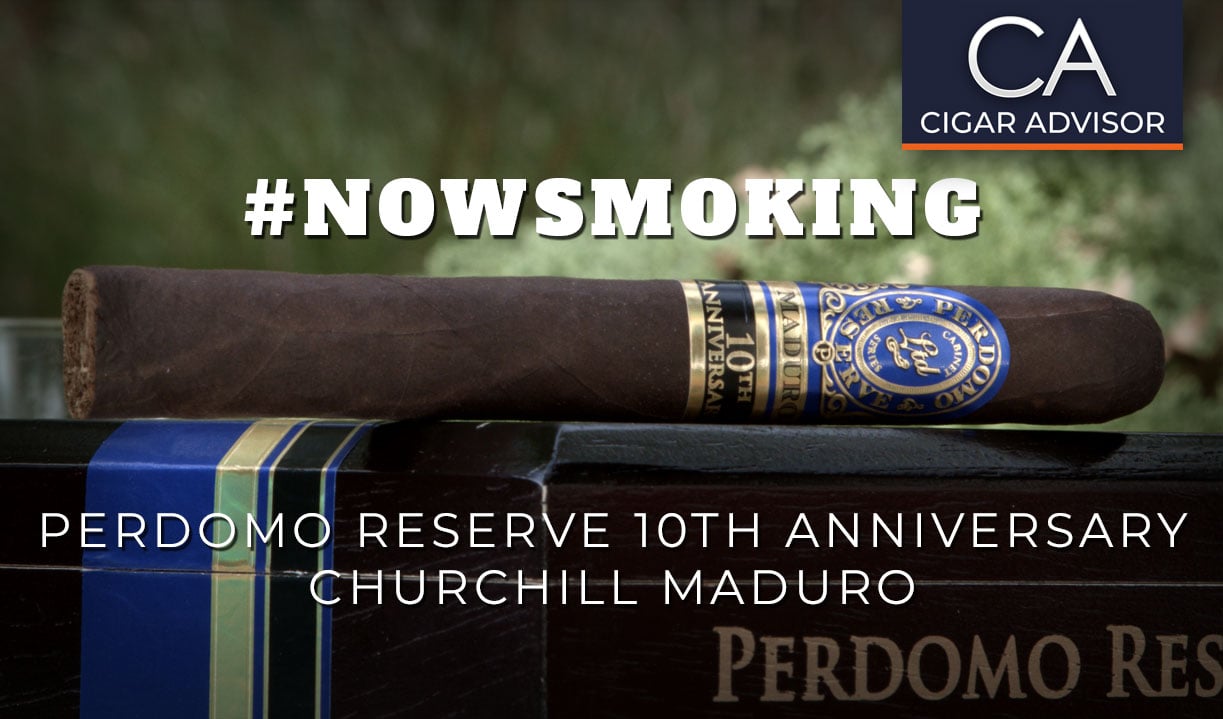 Most Perdomo disciples are familiar with the brand’s bestselling Perdomo Champagne 10th Anniversary selection, which boasts a plush Ecuador Connecticut wrapper. Recently added to that series was a Sun Grown and a Maduro selection, as is the par for the course flavor triangle Perdomo has established. These new additions, like their Connecticut-wrapper predecessor, were also created to celebrate the next generation of Tabacalera Perdomo’s award winning and highly acclaimed original Perdomo Reserve La Tradición cigars. Those of you who have been enjoying Perdomos for around 20 years or so will certainly remember that outstanding line. Even the oversized bands on all three 10th Anniversary cigars echo the great La Tradición legend.

The Perdomo Reserve 10th Anniversary Maduro selection is a medium to full-bodied Nicaraguan “puro” blended with a dark, oily, six-year-aged Cuban-seed Nicaraguan capa that has been bourbon barrel-aged for an additional 14 months. The wrapper surrounds six-year-aged Cuban-seed Nicaraguan binder and filler tobaccos, and the completed cigars are delicately box-pressed. The cigars are handcrafted in six sizes—many with 54 ring diameters—and presented in boxes of 25 cigars. Additionally, the blue, neon-like bands and boxes really pop, practically giving off a light of their own. The boxes really stand out on the cigar store shelf, too. 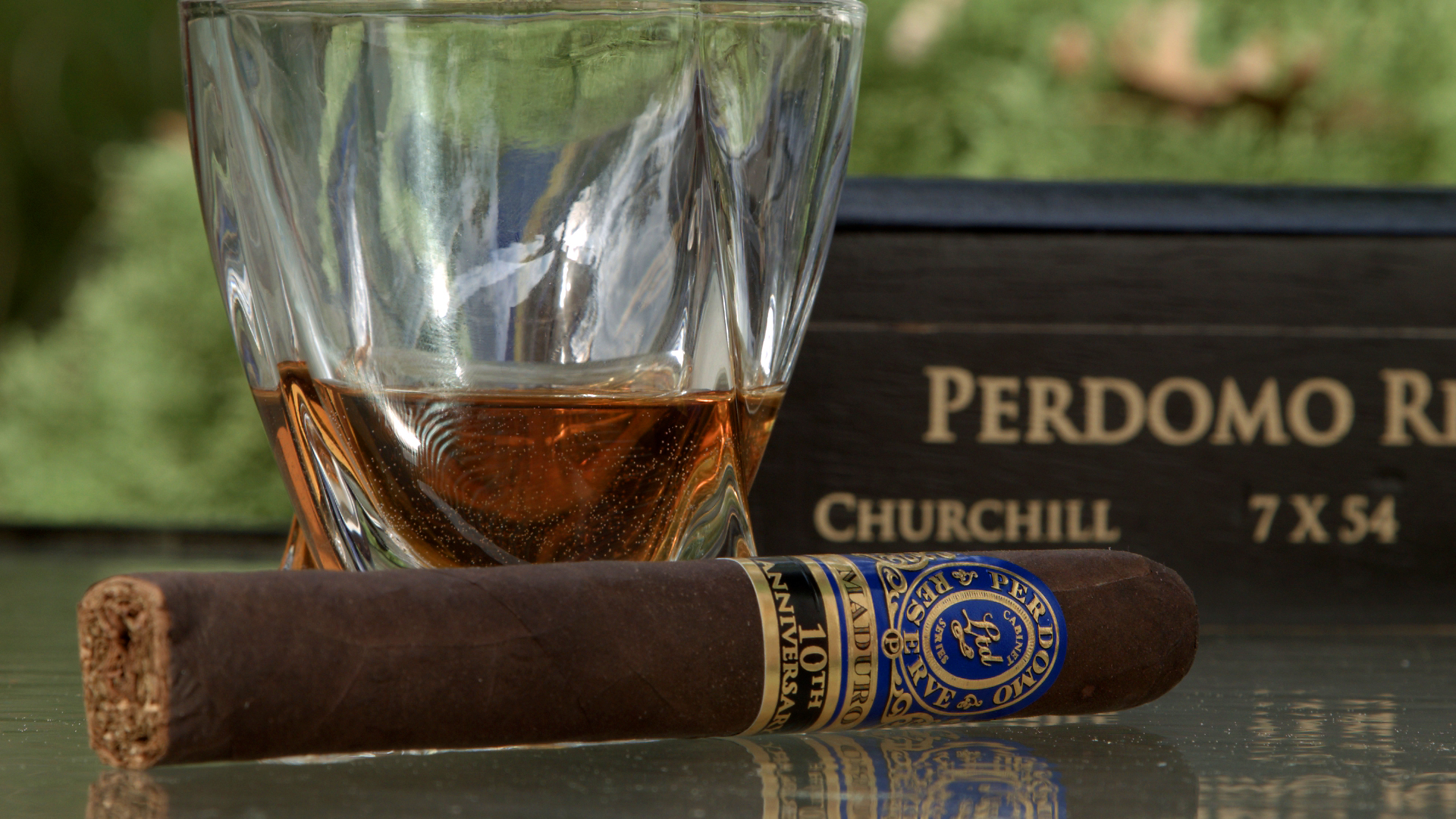 Exceptionally. These tall, dark, and handsome-looking cigars employ toothy, aromatic wrappers that give off a pleasant leathery-nutty scent before lighting. The box-pressing results in softer corners, which I find a little more comfortable, and the triple seam cap was done so seamlessly, I almost couldn’t distinguish it from the rest of the roll, which was also pretty seamless. I found no soft spots, and the cigar offered a mix of leather, oak, and some cocoa in the cold draw. 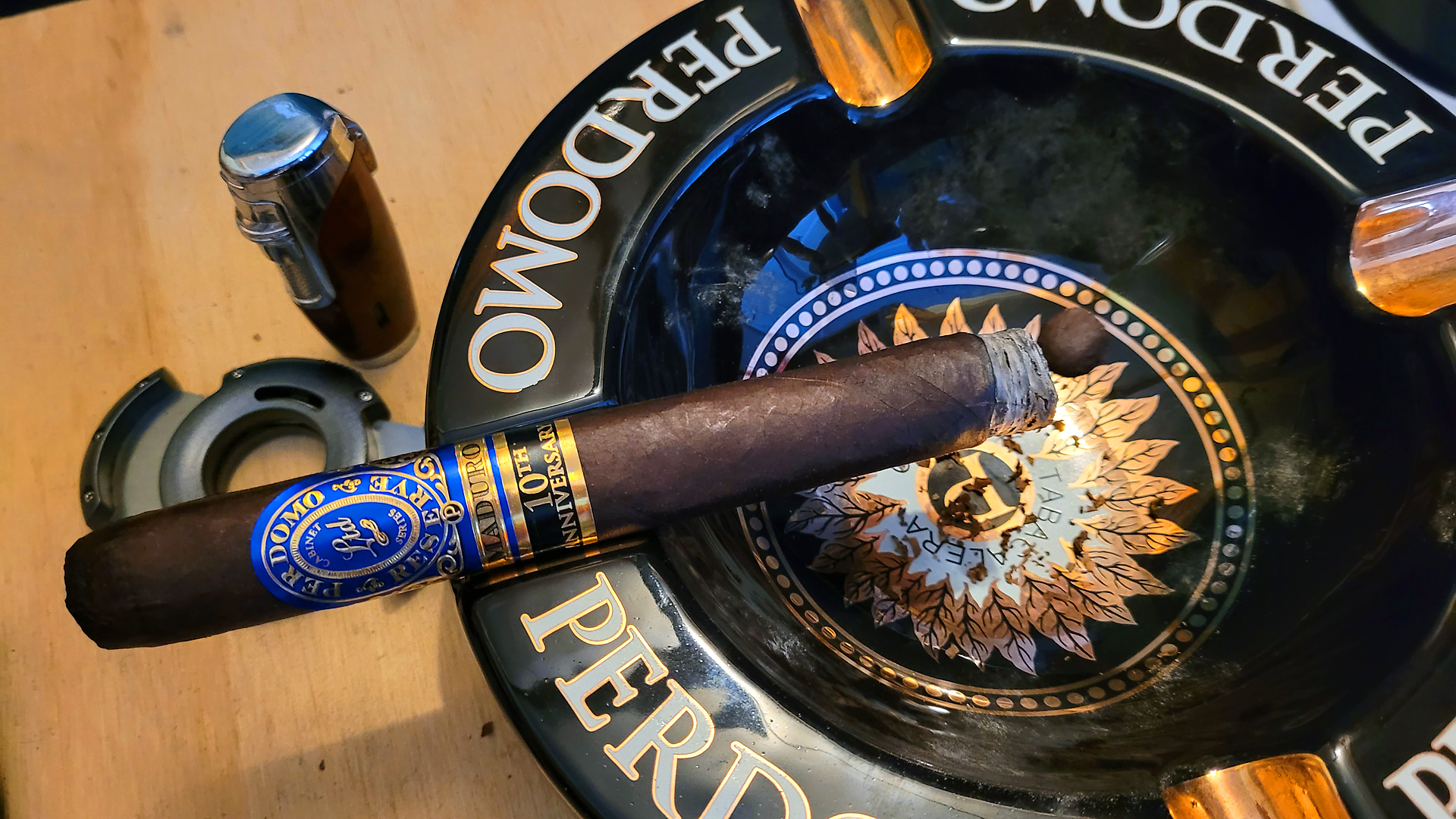 Pretty much like all of the top Perdomo Anniversary cigars; in other words, excellently. The first flavors out of the gate were somewhat earthy, oaky, with a slight tart fruit note. The smoke is impressively creamy and lays a nice fresh coat of leather, oak, and cocoa on the palate with a nip of spice on the finish. The cocoa note was impressive in that, not only did I like it, but it nicely supported the other flavors. The cigar burned perfectly, jettisoning inch nuggets, and by the midsection the cocoa and leather continued while a hint of espresso was added to the mix along with a slight fruity note. All the flavors were well balanced and well defined throughout. The final inches increased in both body and strength becoming more earthy and spicy with some of that bitter espresso flavor lingering in the mix. 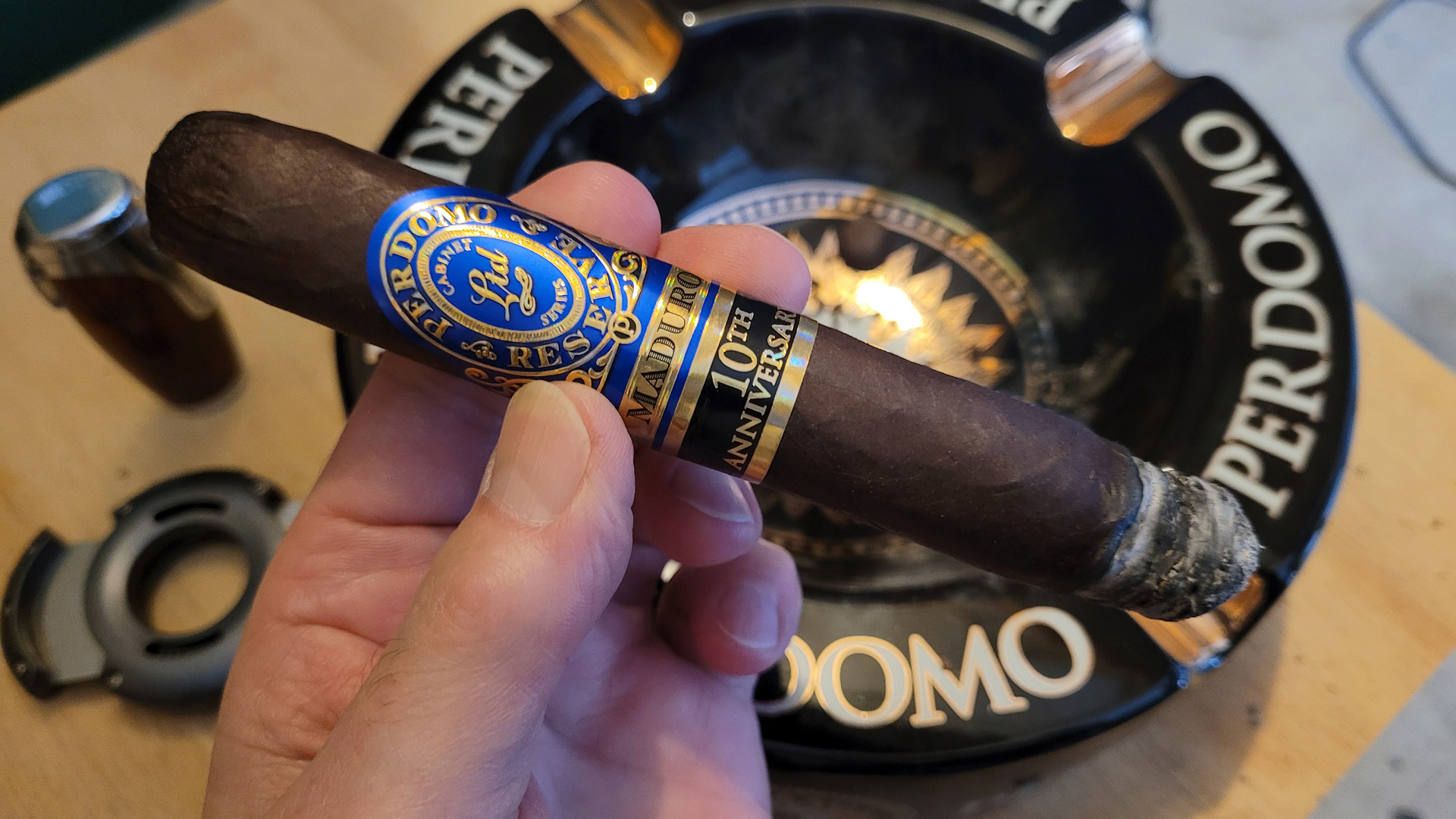 A rich, creamy and very flavorful smoke that offers the full spectrum of leather, cocoa, and oak flavors. Espresso and the occasional flair of tart fruit develop in the mid to late stages. The cigar also offers excellent balance, a savory aroma, and ranges from medium to full in strength. 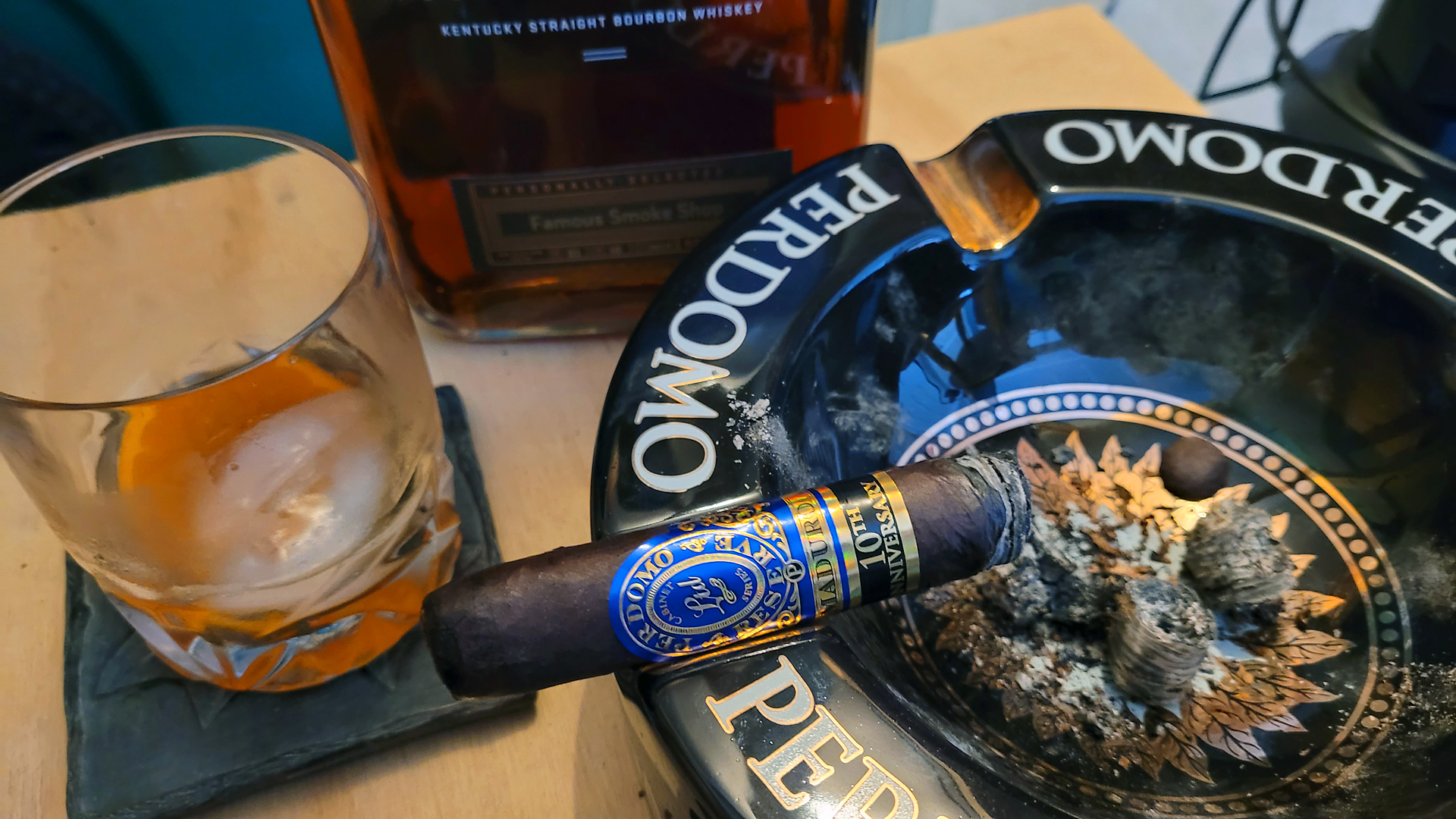 This week again, I decided to go with spring water, and as much as I love coffee with a cigar, I may just stick with the water for these reviews since it keeps the palate clean. Now, as for how the pairing went, I chose the Woodford Reserve, an excellent bourbon. Nick Perdomo also suggests bourbon or Scotch for this cigar, and I can see it. The Woodford, in my case, removed some of the cocoa flavor, turning the finish into a more earthy-leathery mix with some espresso leaking through. I think a long-aged rum like a Flor de Caña 12 Year also makes a good pairing, but if you want to maintain some of this Maduro’s sweetness, go with a sweeter bourbon or rum.

(You can find more cigar and drink pairing combinations here.) 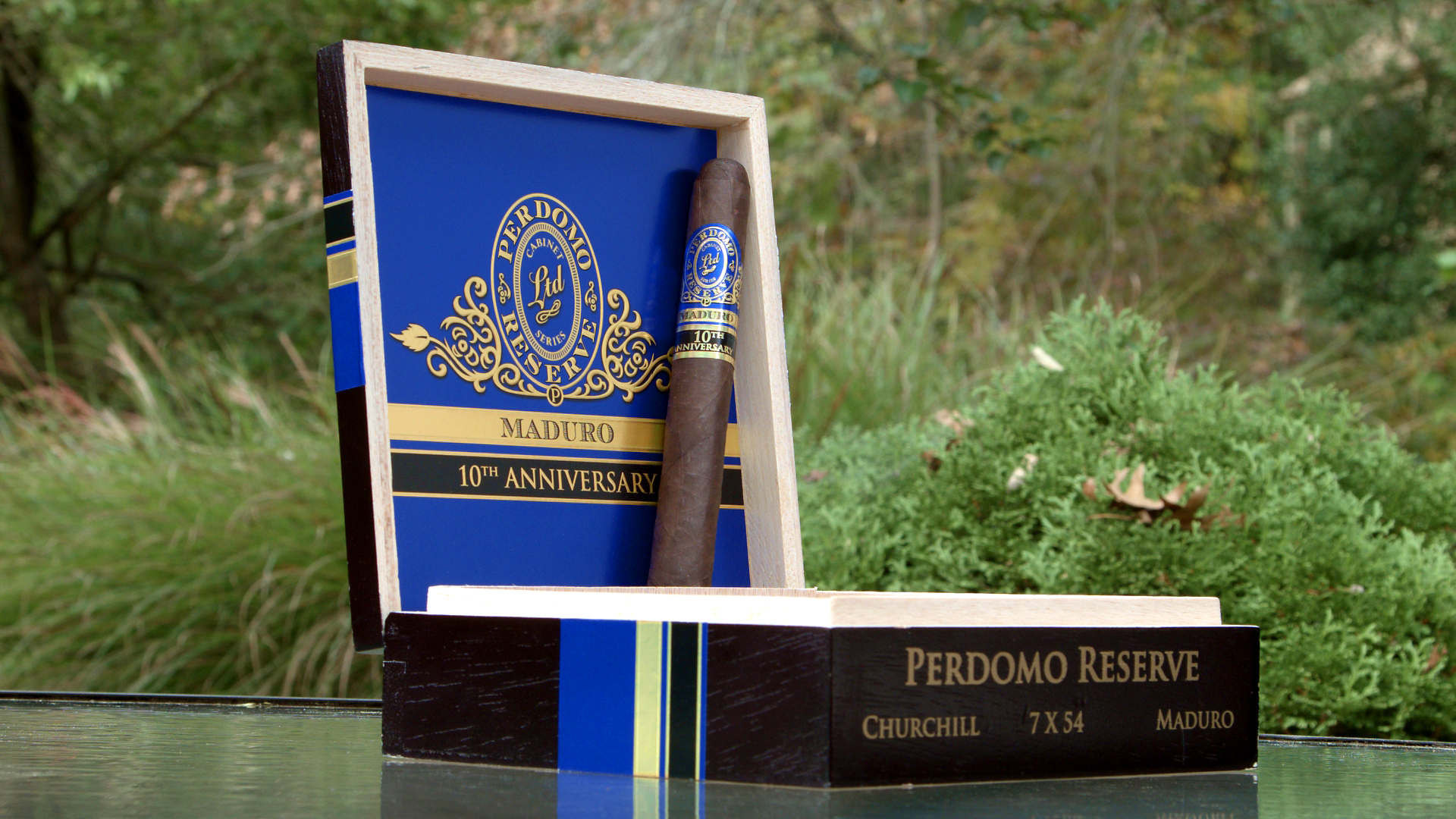 Let me put it this way. If you enjoy the Perdomo 20th Anniversary Maduro, you’ll also like this 10th Anniversary Maduro. The blend is a little lighter in strength than the 20th, which can be heady in the longer sizes. That makes this Maduro Churchill a nice catch for experienced cigar smokers as well as novices who want to get a good idea of Perdomo’s hallmark Nicaraguan character.

Flavor-wise, it’s true to form with most of Perdomo puros. And with the Churchill being under $10, Perdomo continues their tradition of giving you the most cigar for your money.