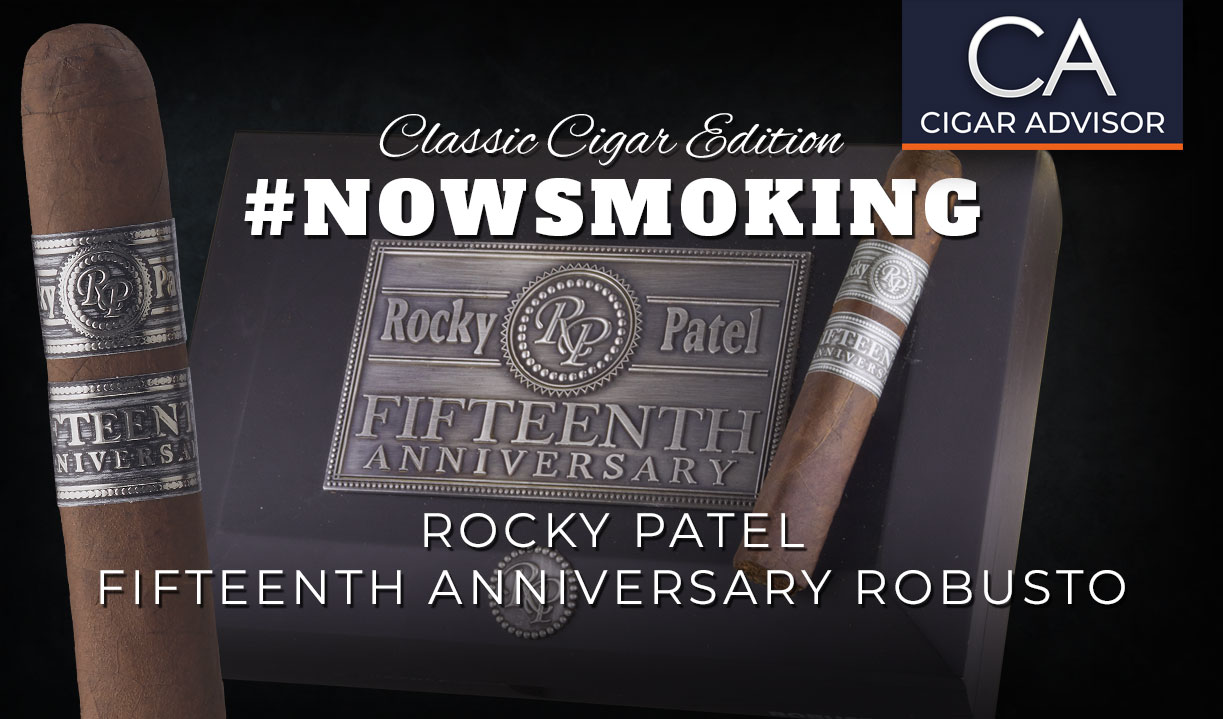 Released in 2010, it didn’t take long for the Rocky Patel Fifteenth Anniversary collection to bullet up the charts. In 2011 the Rocky Patel Fifteenth Anniversary Torpedo received a 93 rating score and landing in the #6 position of that year’s Top 25 Cigars of the Year. Two years later, the Robusto was also honored with a 93, finishing in the Top 25 Cigars of 2013 at #18. 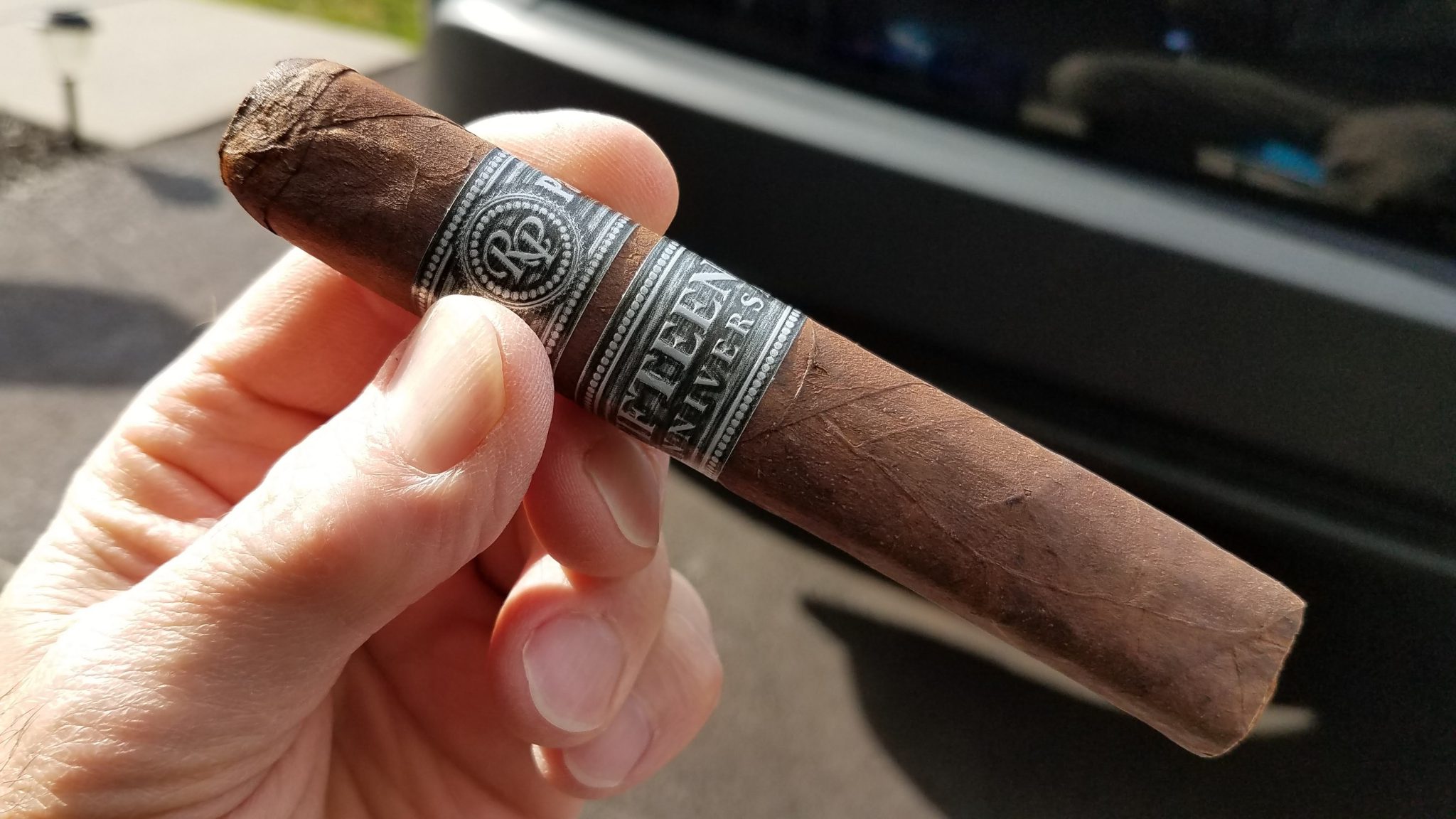 Then came 2018 – the year the collection was given a presentation makeover. The color of the neck bands, which display the Rocky Patel logo above and brand name below, were changed to a shinier silver embossing that pops better against the cigars’ dark, oily wrapper. Additionally, the box was given an all-black outer with silver embossing, and an eye-catching silver background on the interior of the lid. However, the blend and production, which were supervised by Rocky’s ace tabaquero, Amilcar Perez Castro, remained untouched. That same year the Rocky Patel Fifteenth Anniversary Toro also made the Top 25 Cigars with a 92 rating.

The Rocky Patel Fifteenth Anniversary collection is rolled in the traditional Cuban entubar rolling method using Nicaraguan Estelí fillers, Jalapa binder, a spectacular Ecuador Havana seed wrapper, and box pressed. In addition to the Robusto featured in this review, the line also includes a Toro (6½”x52), Sixty (6″x60), and a Torpedo (6⅛”x52) presented in boxes of 20 cigars.
When three of the four sizes have received the kind of accolades cited above, there’s no doubt, you’re dealing with a true classic. And as Mark Weissenberger, VP of Marketing for Rocky Patel Premium Cigars noted, “For years, the Fifteenth Anniversary has succeeded because of its character, strength and complexity.” 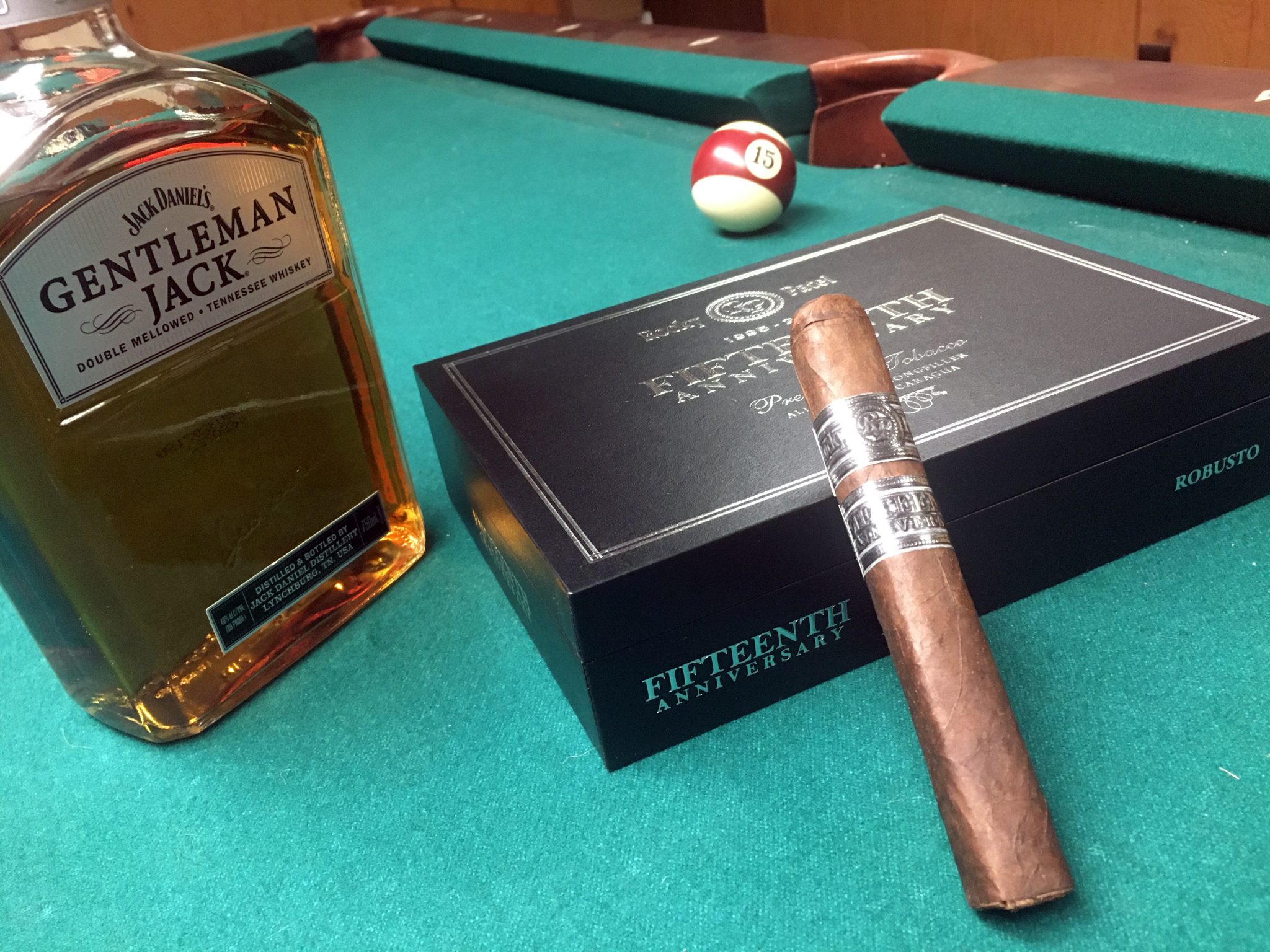 Impeccably. The box-pressing had a sharply squared appearance. The wrapper was flawless; even in color throughout, seamlessly rolled, and finished with a triple seam cap that revealed a perfect draw when cut. I tasted a mix of sweet tobacco, cocoa, and cedar in the cold draw.

The cigar smoked like a classic should. The smoke offered plenty of volume and out of the gate provided a bold, peppery mix. That was just the overture to get your taste buds warmed-up. Just shy of the one-inch mark, the chorus line of bold spice divides, making room for the delectably sweeter notes to descend the stairway.

Early on, the burn on my cigar was negatively affected by the windy day. Rocky was inside and his burned like a charm revealing a firm, almost solid grey ash. Then, for whatever reason, the last third of my robusto set a straight and narrow course. I can also attest that I had another RP Fifteenth Robusto several days later and the burn was perfect from end-to-end. 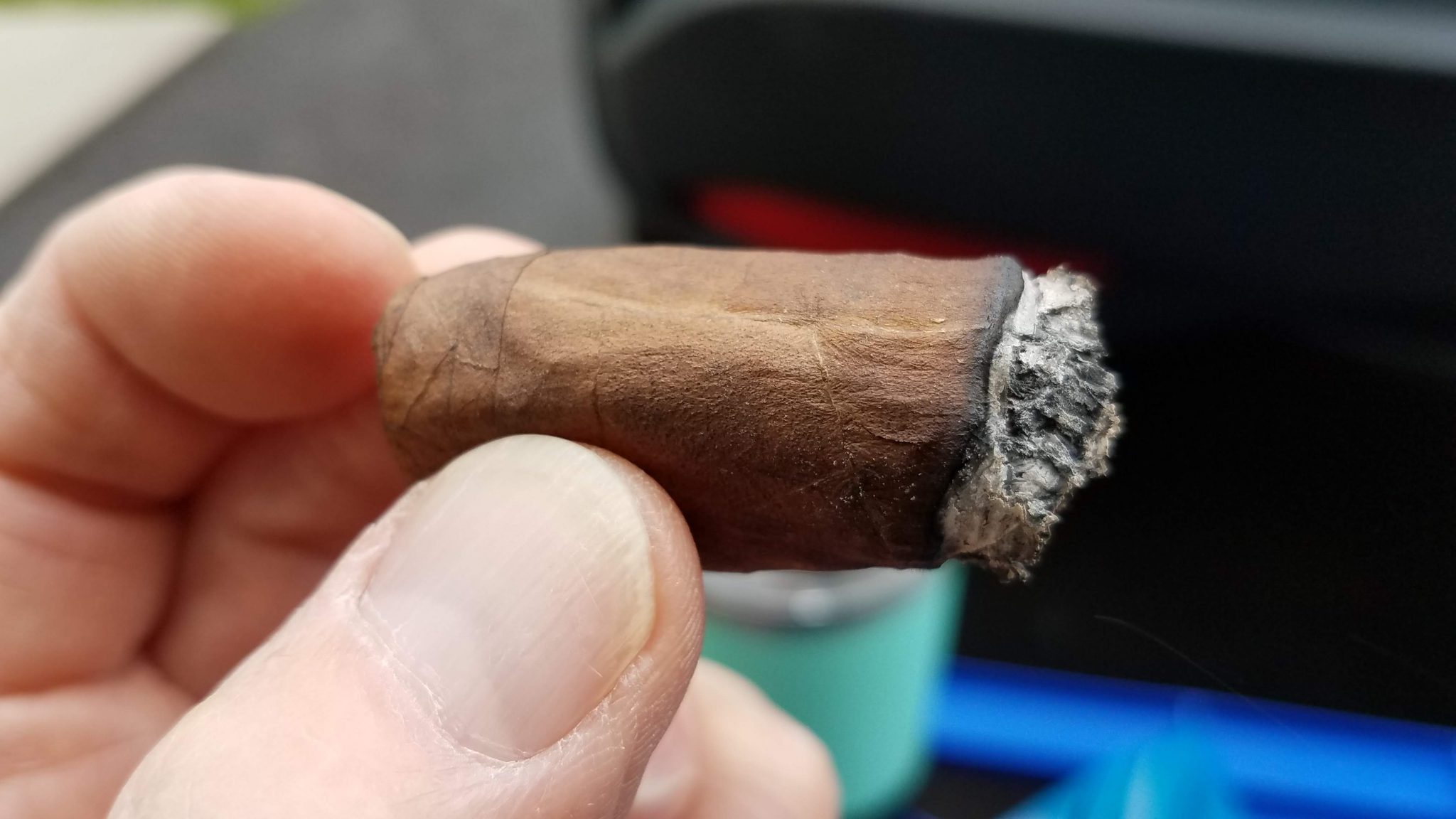 The last two acts were even more flavorful. Still mostly sweet and spicy to my palate, I did note some cocoa, coffee, a sliver of molasses and some sweet spice on the finish. The occasional squeak of pepper offered some snappy change-ups, too. And by the final third, the body and strength had improved significantly, but were far from heady or overpowering.

Mainly sweet and spicy following a bold entrance. All of the flavors were well-balanced with base notes of nutmeg, cedar, coffee, sweet tobacco and pepper. Retrohales were impressively smooth revealing more of the cocoa note. The nub flavors were earthier and spicier yet maintained a relatively sweet finish.

If you watch the video, I brought a bottle of Offley Tawny Porto, a very affordable Port which I was afraid might be too sweet with the Fifteenth, but it complemented the cigar very well. Rocky, who enjoys whiskey with his cigars had a glass of Laphroaig with his Robusto. 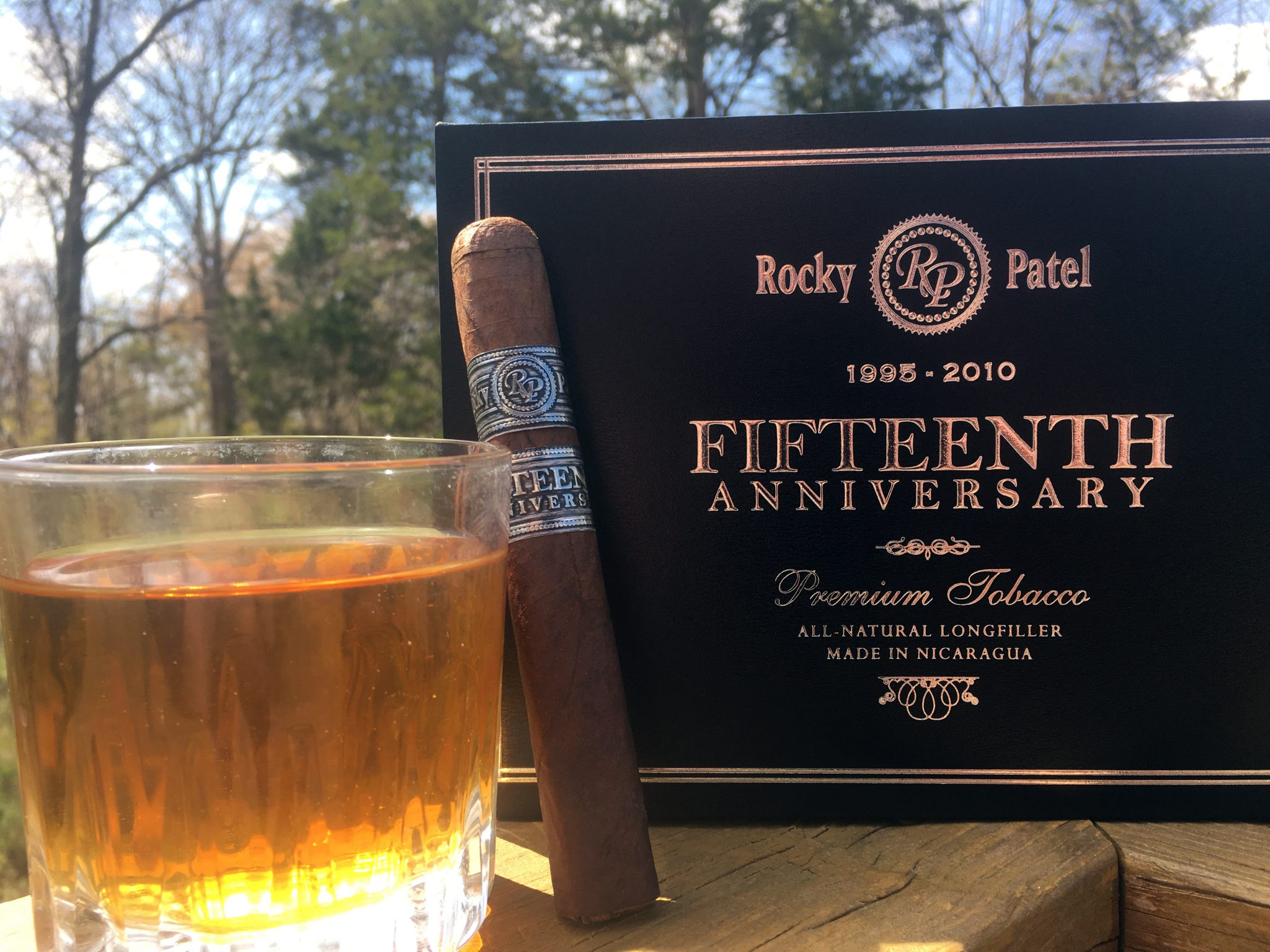 Definitely, especially if you’ve got a few notches on your gun belt. It’s not that the more newly initiated wouldn’t like this cigar, although it could be a little much for some; it’s more like their palate may not be developed enough to truly appreciate the flavor nuances that simmer within. And at $11+ (at press time), it may be a little out of their budget’s comfort zone. Yet, taking into account the myriad flavors, superb burn, and with nearly one hour of smoking time, it’s well worth the price.

Reading Time: 34 minutes Constantly pushing the blending envelope, Espinosa Cigars have become some of the most intriguing smokes in the humidor. Here, the Cigar Advisors take you deep inside the Espinosa showroom for this Essential Tasting Guide that covers 24 cigars in all.