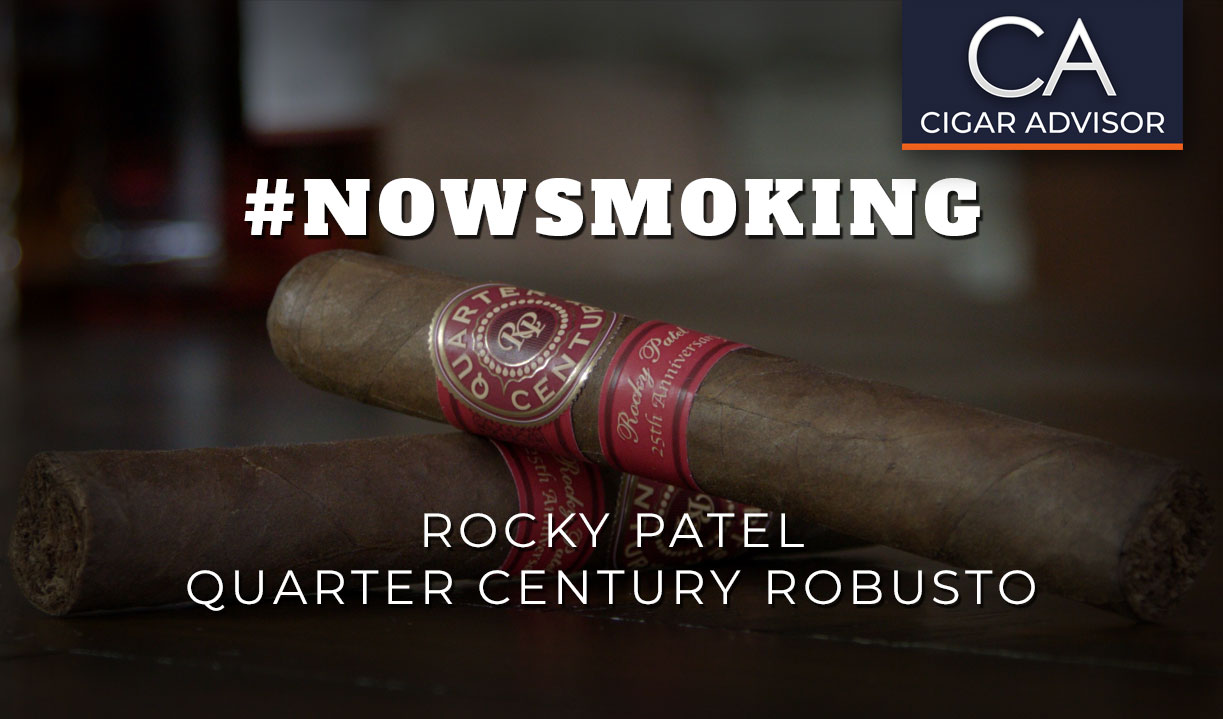 Presented in Boxes of 20, 5-packs and singles.

When Rocky Patel first discovered the joy of smoking premium handmade cigars—back when he was an entertainment attorney—he probably never dreamed that one day his name would appear one of the biggest and most successful brands the premium cigar industry. 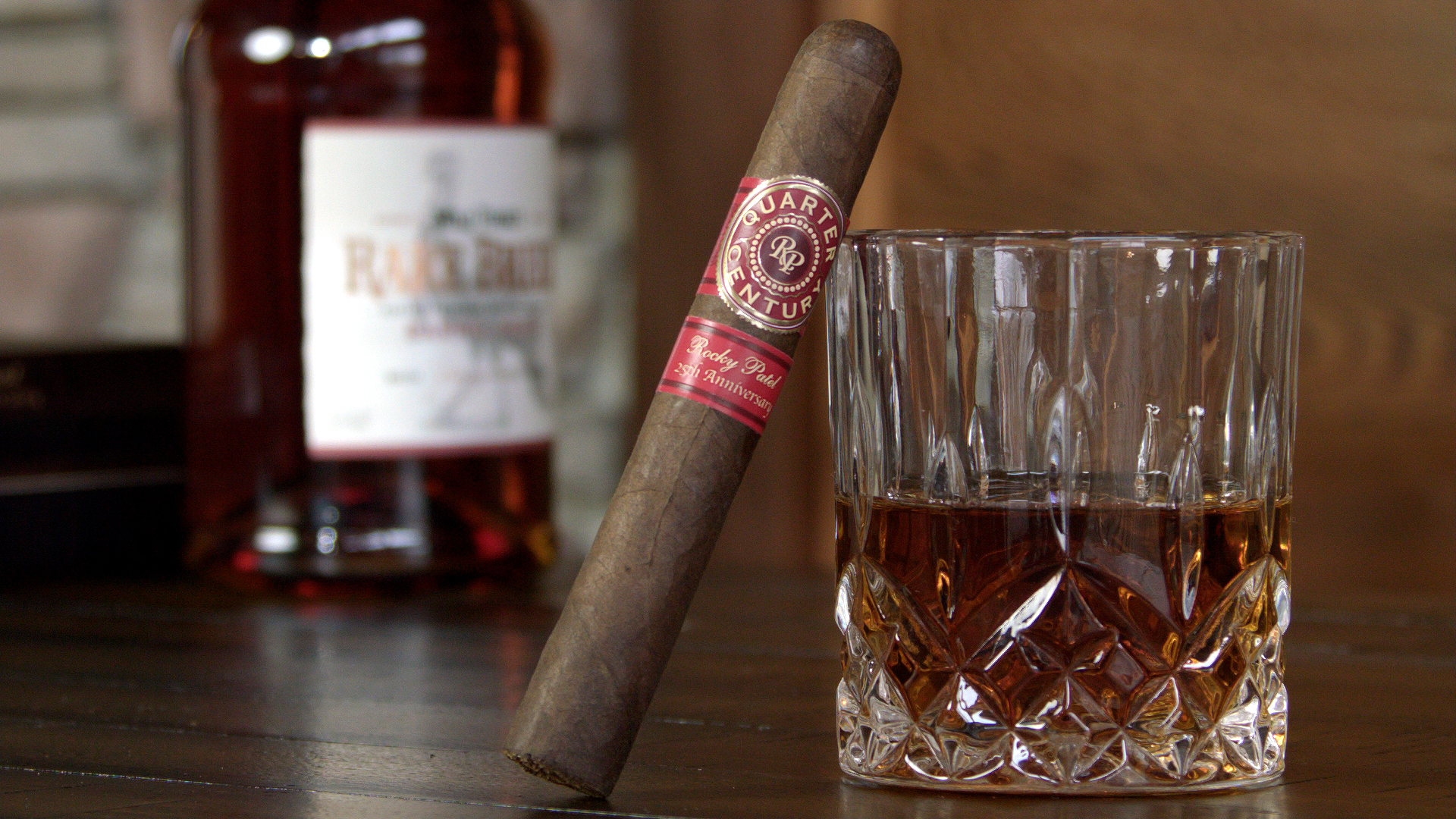 “We’re pulling out all the stops to create our greatest masterpiece ever,” states the press release. “Named after 25 years of rigorous innovation, this cigar embodies everything that we hold sacred here at Rocky Patel. Hard work, dedication, and attention to detail.”

All of the prior anniversary releases have received 90-plus tasting scores, and the Quarter Century follows suit having already received an “outstanding” 91 from Aficionado, plus it made Cigar Snob’s #8 cigar of 2020. 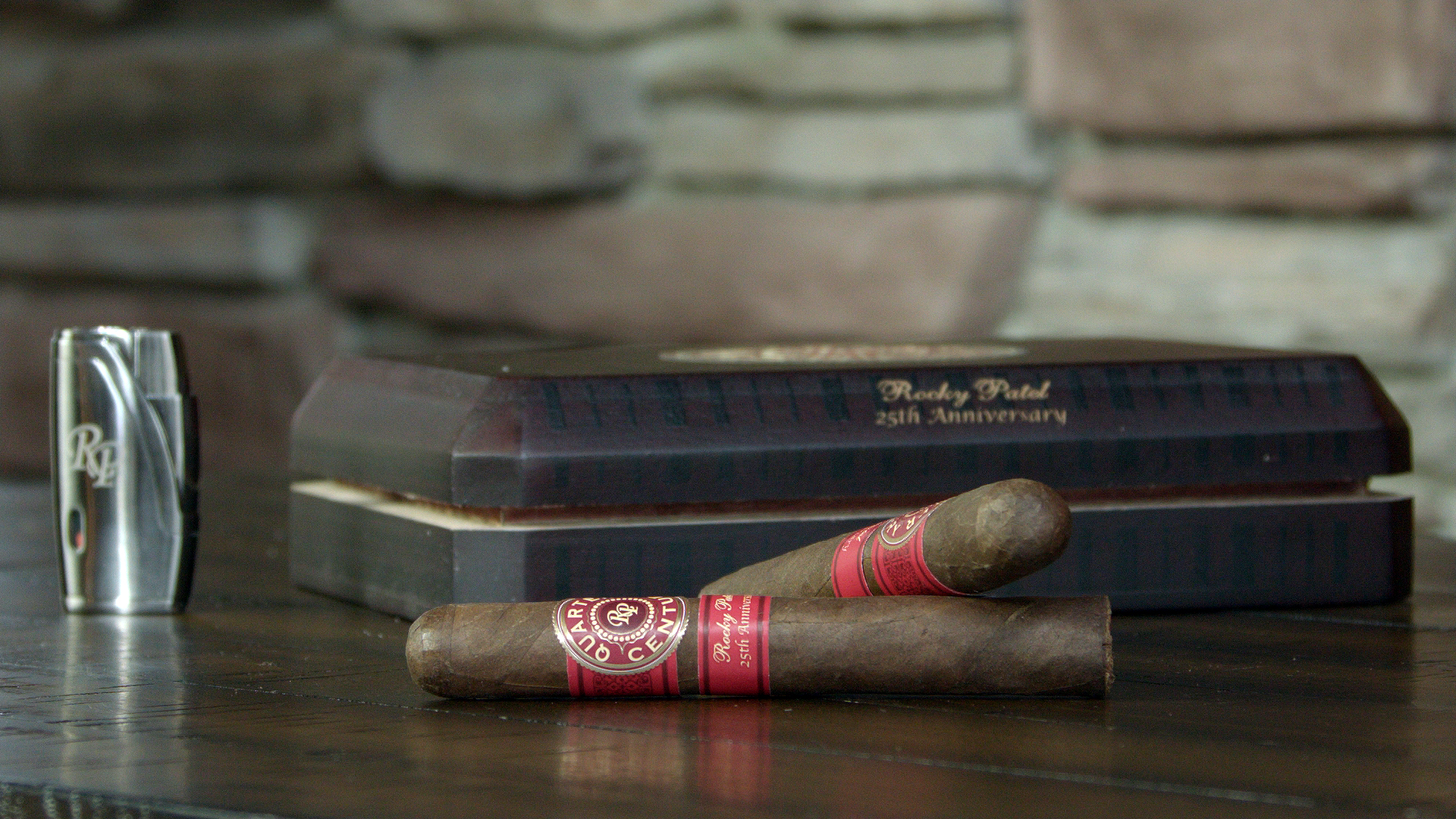 The Rocky Patel Quarter Century blend boasts a plush San Andrés wrapper, Honduran binder, and the finest Nicaraguan and other “undisclosed” tobaccos Rocky and his blending team could muster. The tobaccos have had 10 years of aging, and the cigars received two additional years of aging after rolling. The company also sees the Quarter Century selection as more than just an anniversary cigar. This release marks “the beginning of a new era” for Rocky Patel Cigars.

The Rocky Patel Quarter Century selection is handcrafted in the following three sizes, presented in boxes of 20 cigars:

Construction: A very handsome looking cigar. I like how the red and gold double bands pop against this stunning wrapper, which appears to be a little lighter in color than other San Andrés maduros. The cigar is also well packed and fashioned with a clean, triple seam cap.
Draw: For my pre-video sample, I forgot my cutter, and since I don’t like borrowing house cutters, I used my thumbnail. It was a little crude but it worked out pretty well. But my on-camera Robusto clipped beautifully resulting in a slightly firm but good draw.
Cold Draw: The prelight flavor on my sample was herbal and a bit fruity, reminding me of dried cranberries. But my on-camera sample, which I smoked outside, offered more of a nutty and floral taste.
Toasting and light: No issues getting the cigar started. Earth and peppery spice lead the first few puffs, which I found a little more spicy than my earlier sample which was smoked indoors.
Base flavors: Earth, cedar, roasted nuts, herbal spices, floral elements, dried fruit.
Aroma: The aroma from the wrapper was woody and grassy, while the smell from the foot was quite fruity. Once lit, the aroma was sweet with some spice and floral fragrances.
Retrohale: Spicy but not peppery.
Burn & Ash: About as good as it gets. Both samples burned perfectly with extremely firm ashes. Even more impressive was that my on-camera cigar burned perfectly despite a pretty stiff wind blowing towards me. 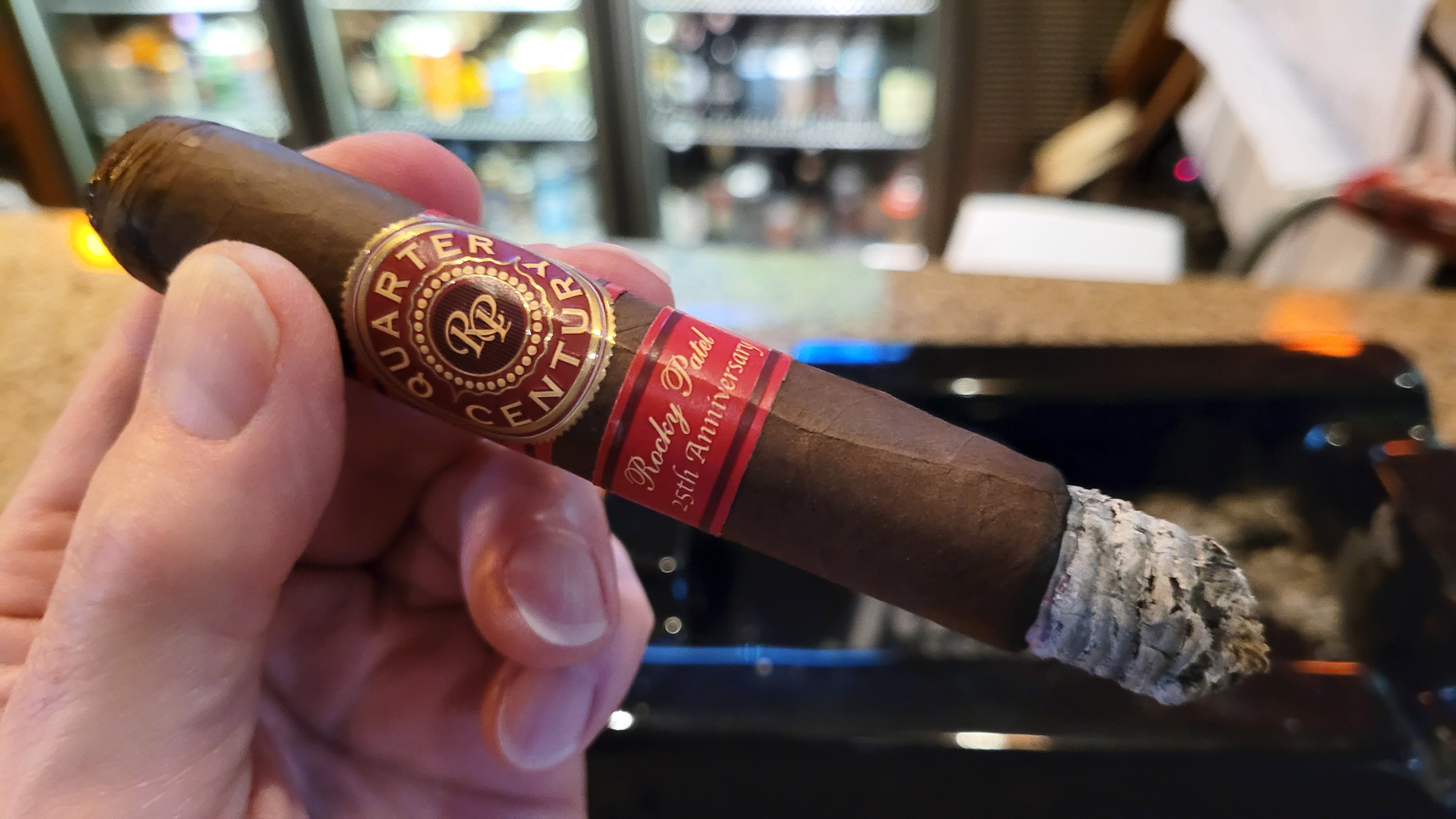 Off to a tasty and spicy start. Along with the spice, there was also some earth and dried fruit on a long, spicy finish. The smoke was very smooth, creamy and well-balanced. The draw also allowed for plenty of creamy smoke to escape through the head. The body and strength were medium at this stage. There was also some of that Cuban-ish floral essence in flavor and aroma. 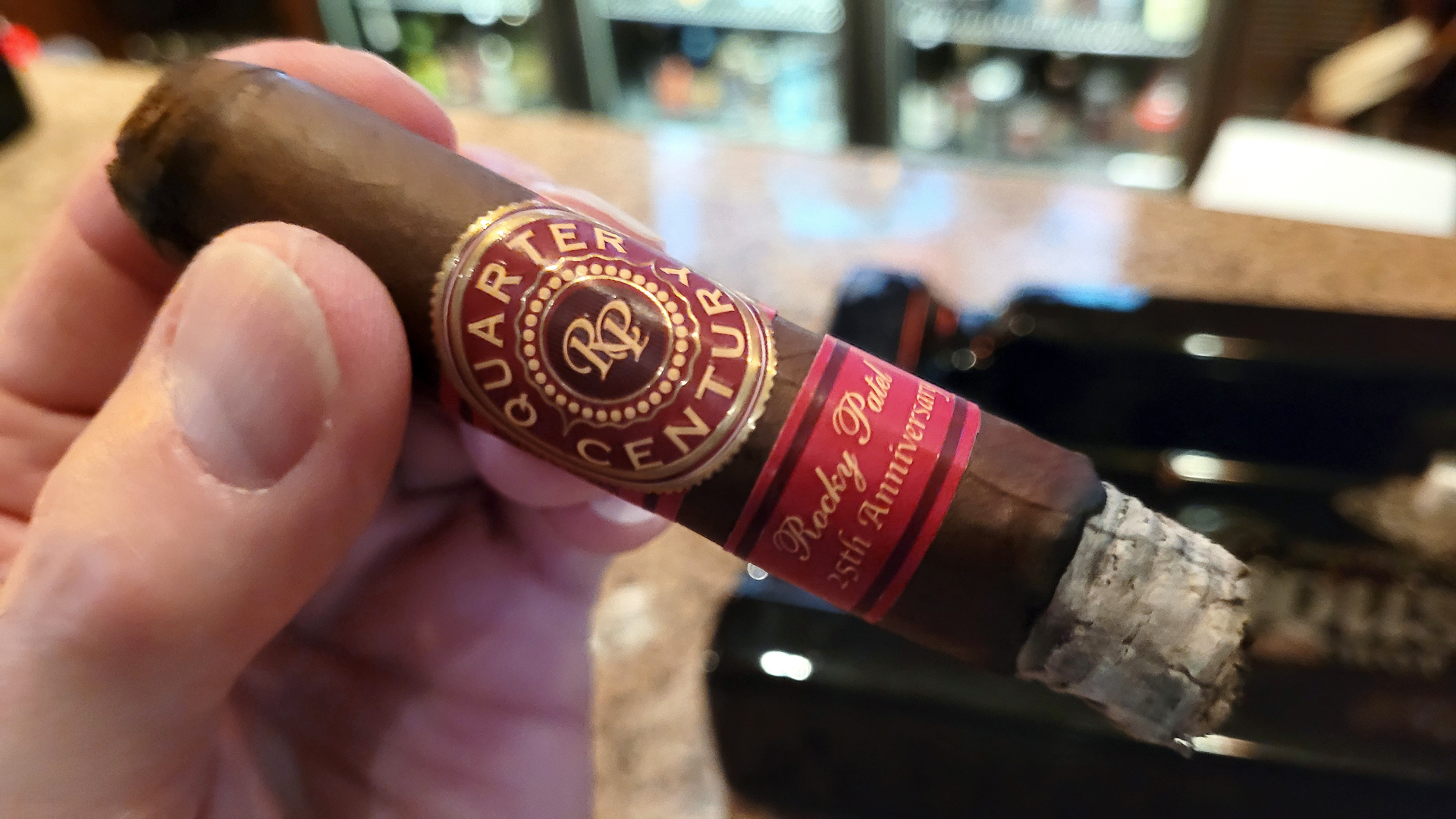 So far, the smoke has been very consistent and balanced. The flavors at this point revealed cedar and herbal spices with a thin layer of sweetness somewhere in the middle. Another long, firm ash was also forming as the cigar continued to burn true. In fact, this ash was so firm that it refused to die even after some pretty firm taps. I’ve never seen anything like it.

Also at this stage, the body and strength hitched-up to medium-plus. I also picked-up more dried fruit and floral notes. By the end of this act the smoke revealed more earth, cedar, and nuttiness, but the sweetness was fading fast.

By now the cigar was firmly settled into a medium–plus body. The smoke was still very smooth and creamy as earth, cedar and nuts dominated, while the sweetness continued to avoid me. I also realized that lighter puffs, or holding the smoke longer in your mouth produced more definitive flavors. Even some of that illusive sweetness returned for me. The cigar finished with a mostly earthy-woody character, and was still impressively smooth. Definitely a nubber. 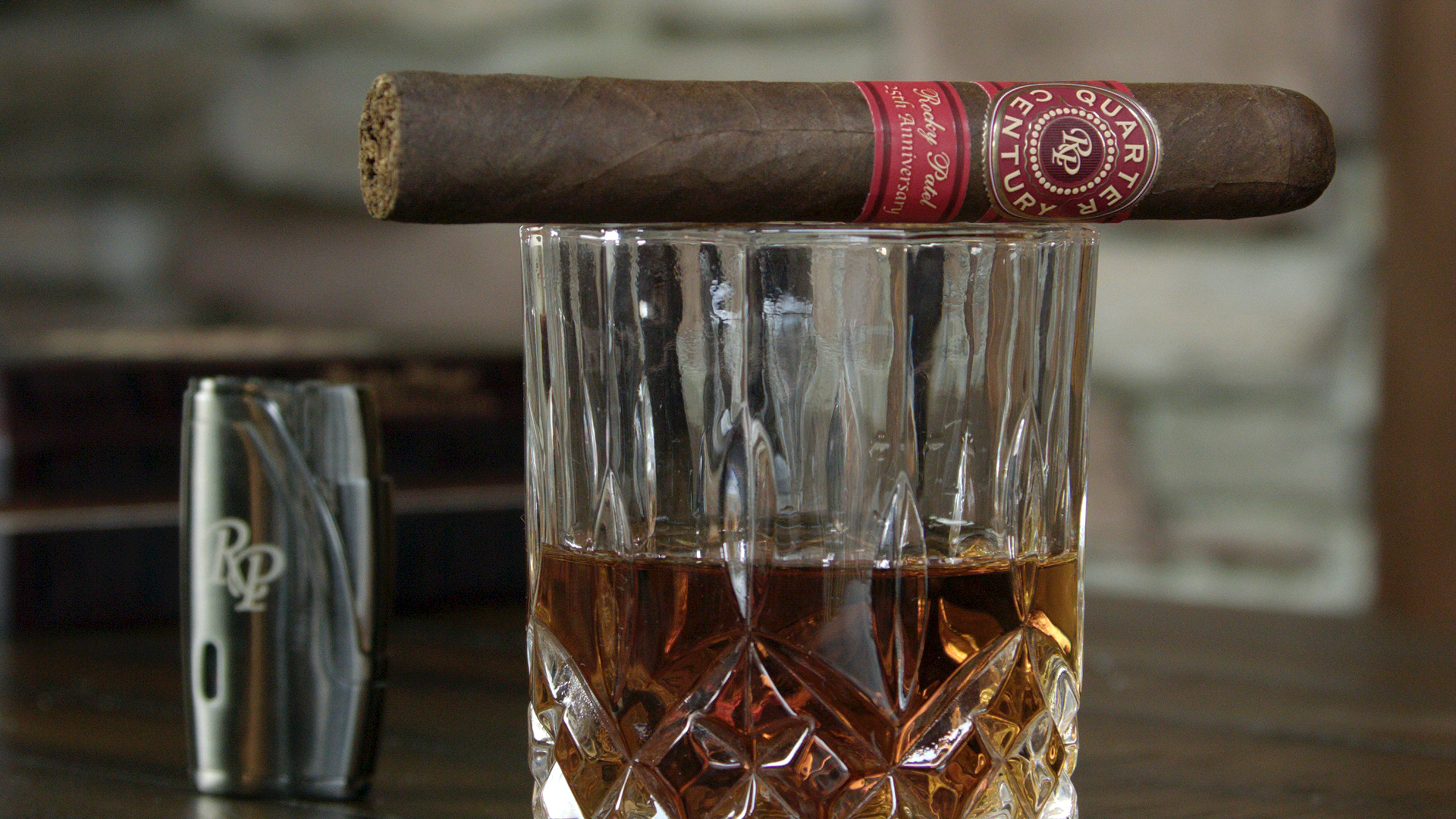 Our pairing expert suggested a dry, red Cab like the Robert Mondavi Napa Cabernet, or Buena Vista Sonoma Cabernet Sauvignon. The Mondavi is rich with dark, fruity flavors of black cherry, plum, and blackberries. It also has a sweet-spicy character with silky tannins and the occasional note of dark earth and sweet tobacco. Bourbon fans may want to try the Wild Turkey Rare Breed Barrel Aged seen in the video.

I know Rocky wanted to make a big impression with this Quarter Century anniversary cigar. He did an amazing job with the choice of the tobaccos, especially the wrapper; the rolling, the bands – it’s all top drawer. It’s quite complex, too.

I can easily recommend this Robusto to just about every cigar smoker for its smoothness, body, and balance of flavors. Newbie palates may not be as tuned-in to some of the more nuanced flavors, but I think they’ll still get a lot out of it.

Overall, the smoke was very smooth, clean, never over–the–top in strength, and well-balanced with an earthy, woody and nutty flavor profile. I would also reserve this cigar for an after-dinner session or when you can put aside the time to appreciate it without interruption. There’s definitely a lot of good stuff happening in the cigar, and you don’t want to miss a beat. As to any other flavors in there, that will depend on your palate. If you do, leave a comment. I’d like to know what you tasted.

Reading Time: 3 minutes The only things we love as much as new cigars are some new toys – this time, it’s a load of Jet Line lighters that have made their way in to Famous. Let’s check ’em out!