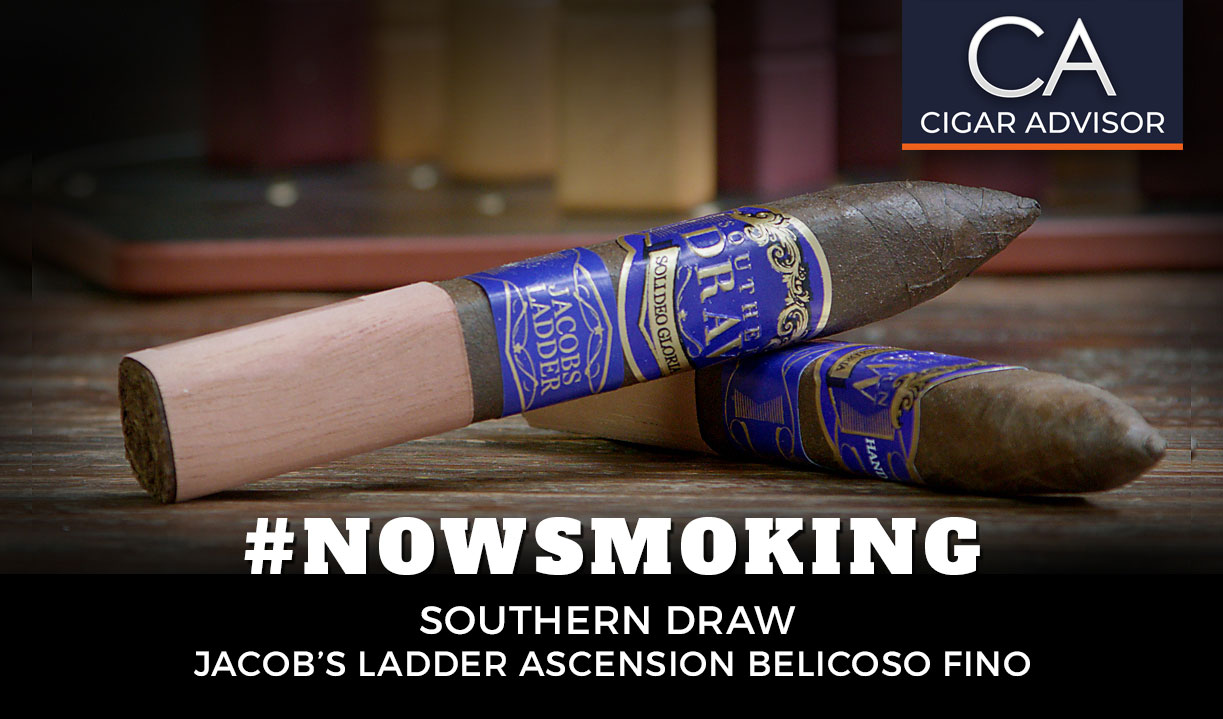 Presented in bundles of 10 cigars

This newest Southern Draw Jacob’s Ladder Ascension cigar is actually a 2013 version of the brand which was originally blended with a Mexican San Andrés wrapper, rather than the more familiar Pennsylvania Broadleaf. Box-pressed, as they’ve done with other Southern Draw Belicoso Fino sizes. to give the Ascension a little extra charm, the finished cigars are adorned with cedar sleeves. 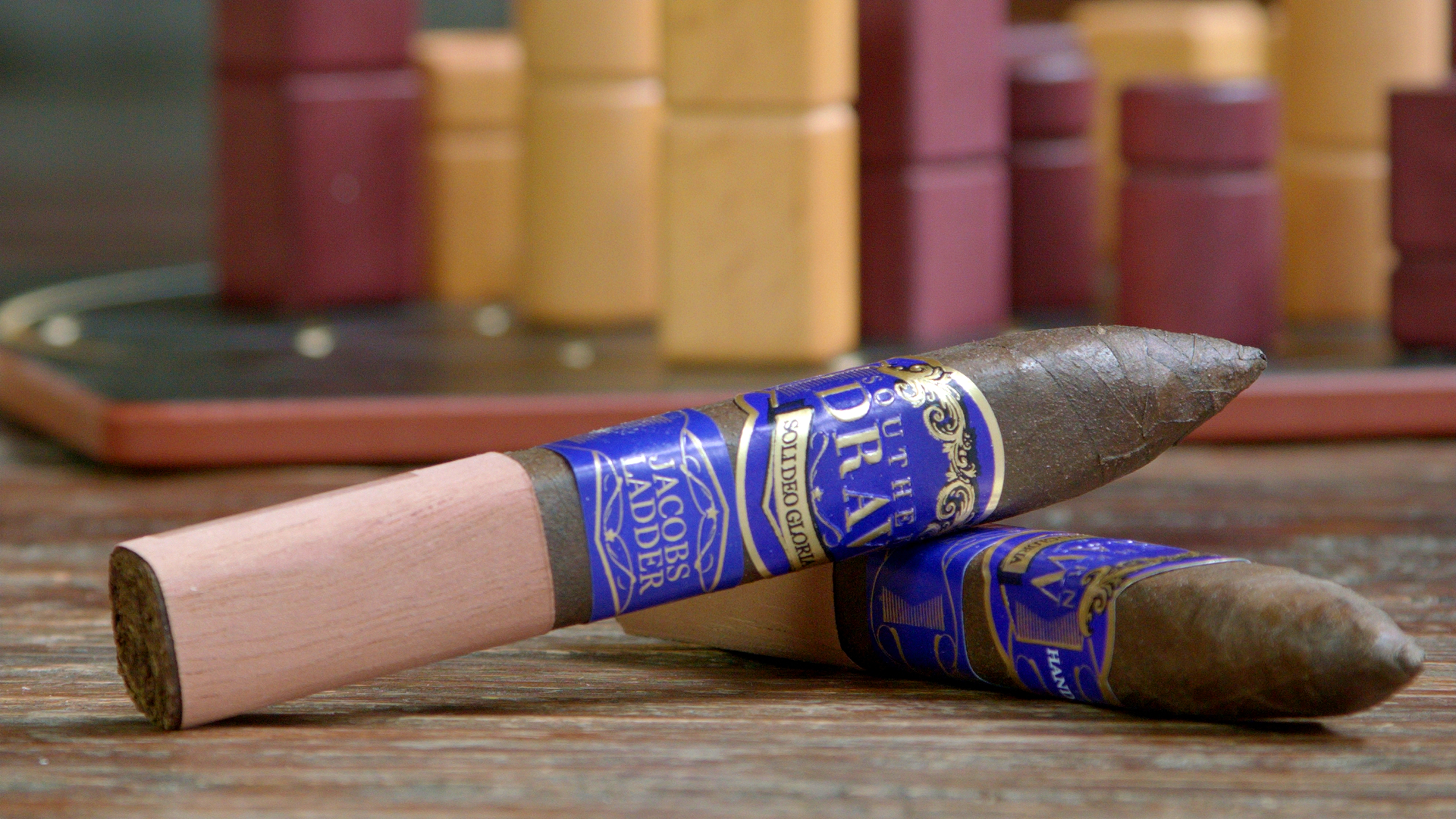 Not produced until September 2016 at AJ Fernandez Cigar Co. in Estelí, Nicaragua, the Ascension was finally released on September 23 of this year. It was also the 21st birthday of Ethan Jacob Holt, son of Sharon and Robert Holt, and for whom the Jacob’s Ladder line is named. In other news, Jacob, who coined the brand hashtag “#boldbutapproachable” for the brand, has also recently joined the company. 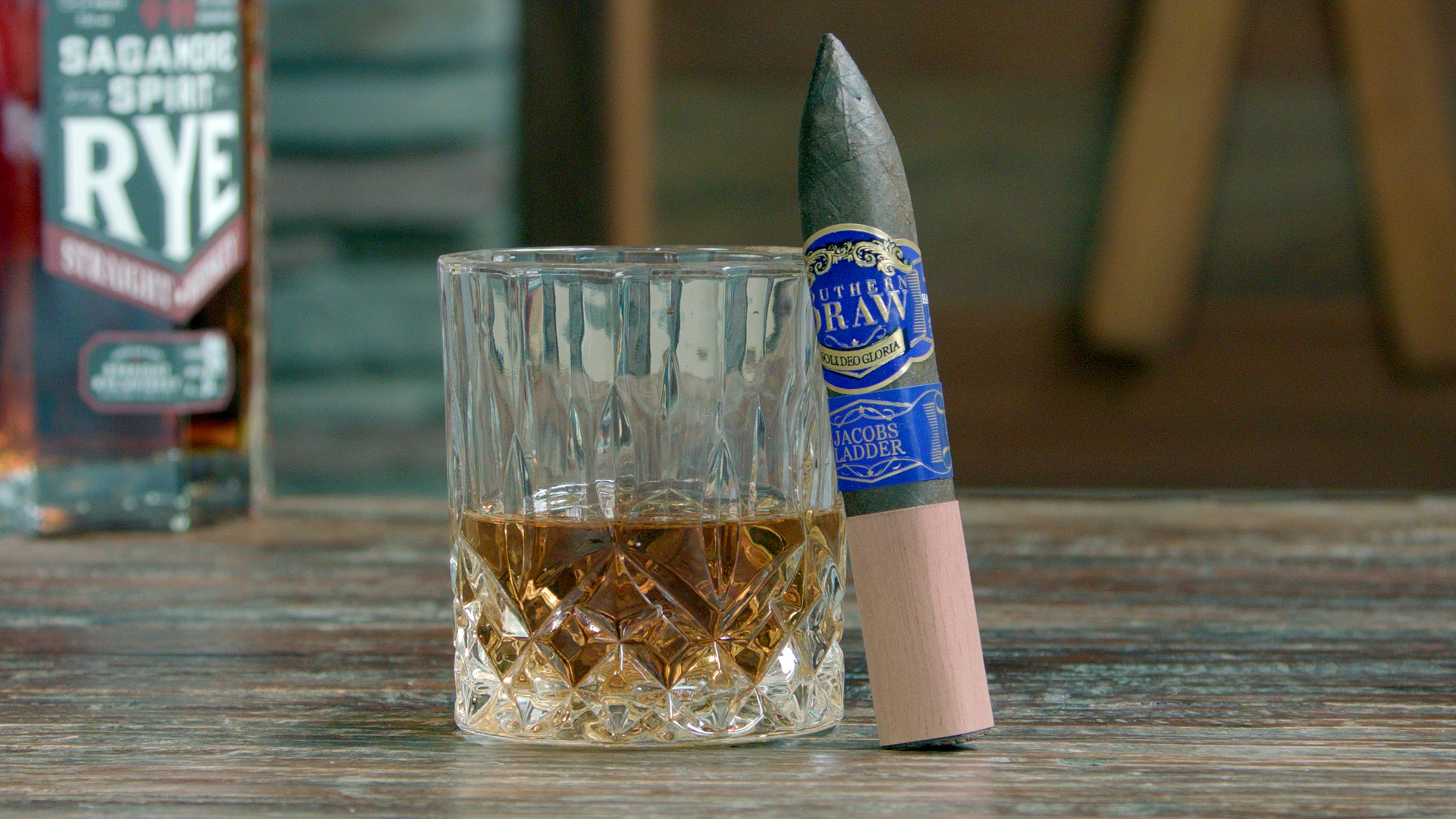 So why the five-year delay? After the cigars were completed, Robert decided to hold off releasing them. He felt that something about this cigar was very special and put them aside until the aforementioned occasion. The first 10,000 cigars were released to Famous Smoke Shop, that debuted the cigar with an in-store event last month, while 100,000 in total will go into circulation nationwide.

Construction: Beautifully rolled and pressed; no soft spots at all. Removing the cedar, this cigar looks absolutely perfect. The San Andrés maduro wrapper is thick, flawless, and has a rich, oily, dark chocolate color. The cap is also well applied. At the foot, you can see the dark ligero leaf in the center, another sign of good construction.
Cold Draw: Perfect with a semisweet and earthy taste.
Base flavors: Earth, semisweet tobacco, tart citrus, cedar, baking spices.
Aroma: The wrapper was sweet and cedary, while the smoke was sharp and spicy.
Burn & Ash: As good as it gets. Even, with a thin carbon line, the burn reveals grey ashes that are remarkably stubborn. 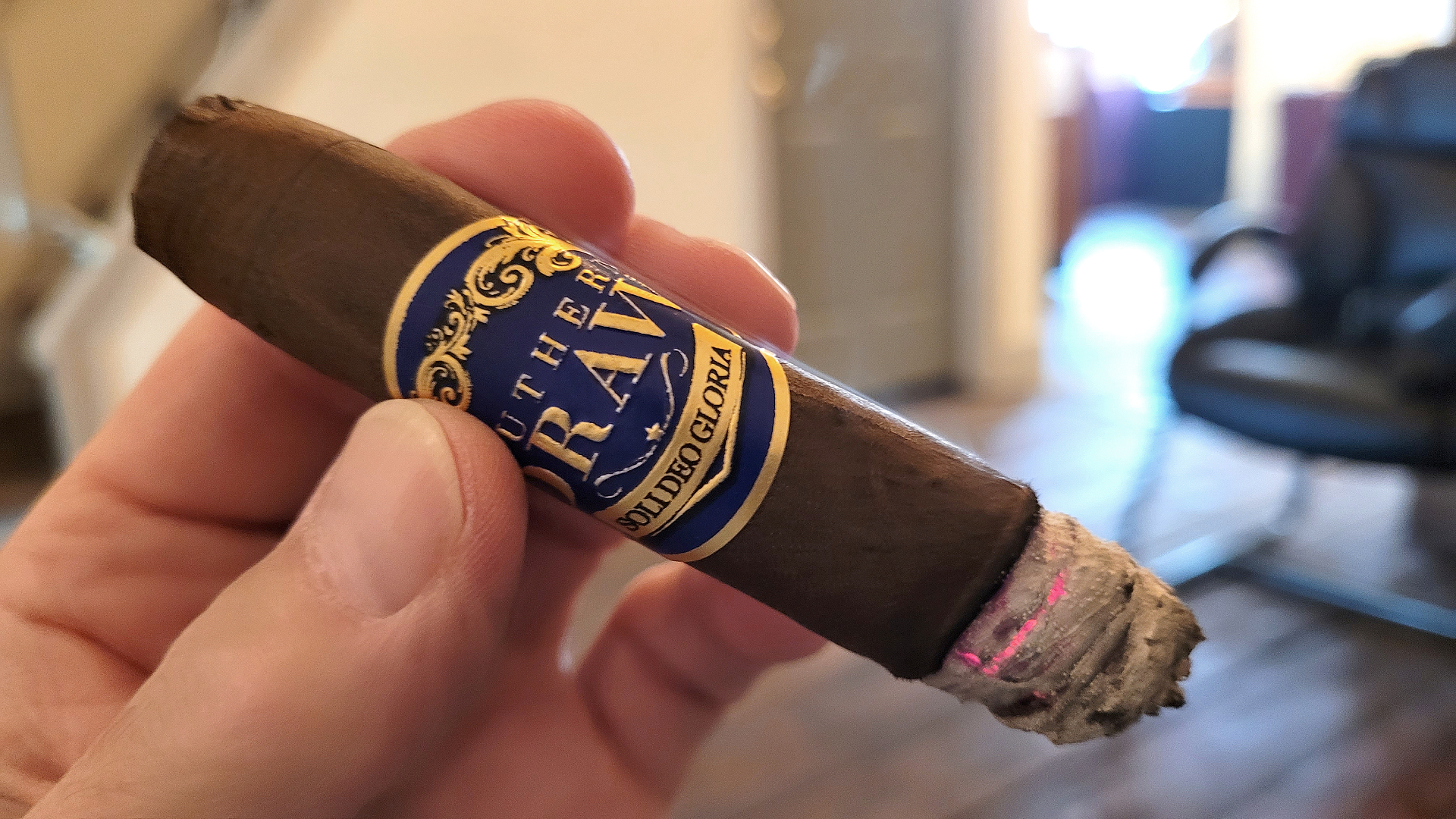 Peppery spice right out of the gate; no surprise there, since most Nicaraguans are frontloaded. The spice settled down a little faster than usual, ushering in a very smooth, medium-body smoke that was earthy but ran a little sweeter in the first inch. From the mid to latter part of this section the cigar offered plenty of earth, some underlying sweetness, tart fruit notes, and cedar. I also noticed that the finish was very clean. Arriving at the border of Act II, the body had shifted to medium plus and picked up slightly in strength. 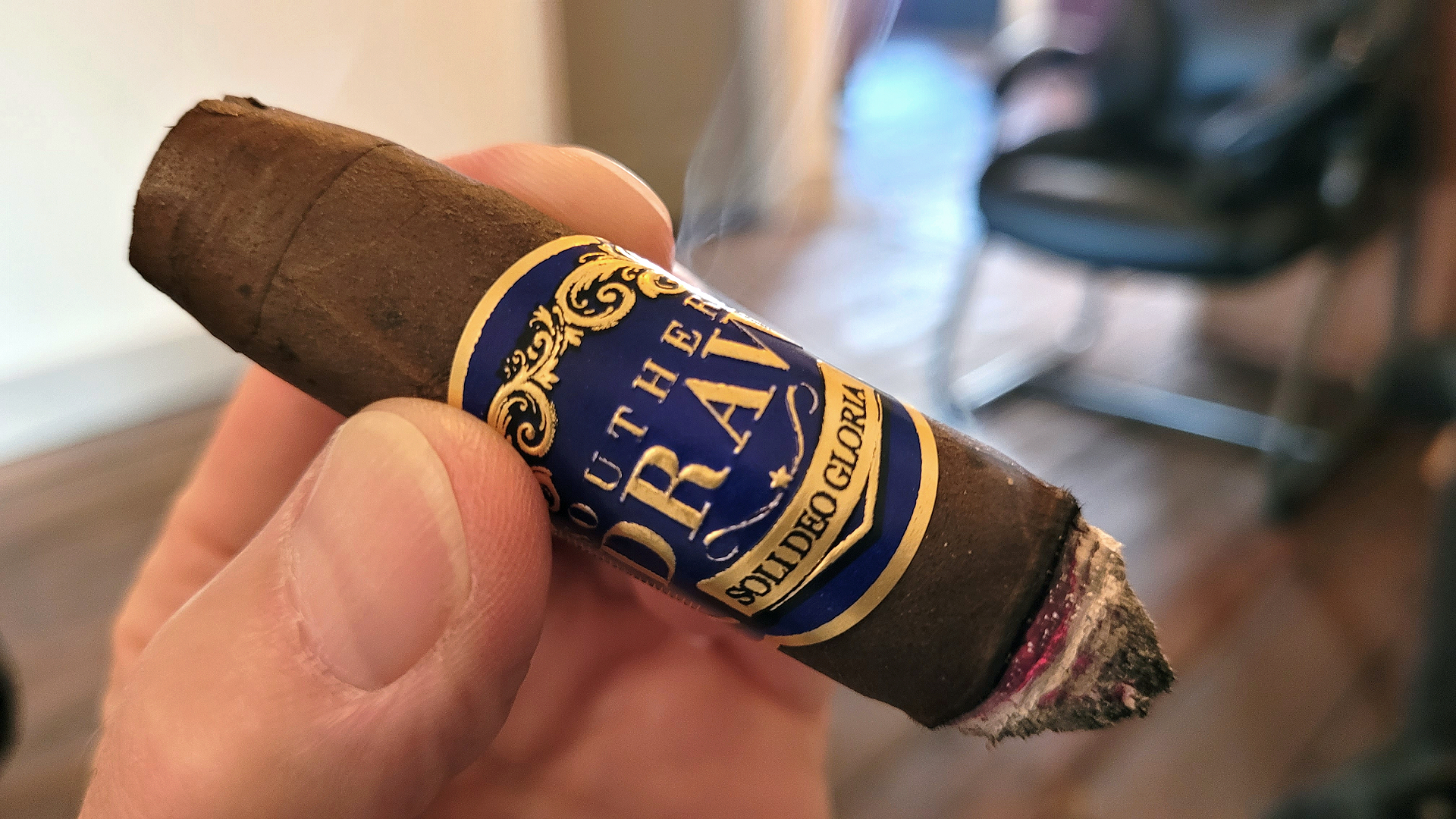 Not much change in the midsection. Still medium plus in strength, earthy, a little sweet, and cedary. The fruity note tended to come and go. The cigar was very well balanced, and if they gave ratings for burn it would be a 99. Moving on, the cigar remained smooth and creamy. Here again I picked up that citrusy note. So far, the performance was excellent. The smoke output was also pretty hazy, and I was still trying to figure out how they got such a clean finish. 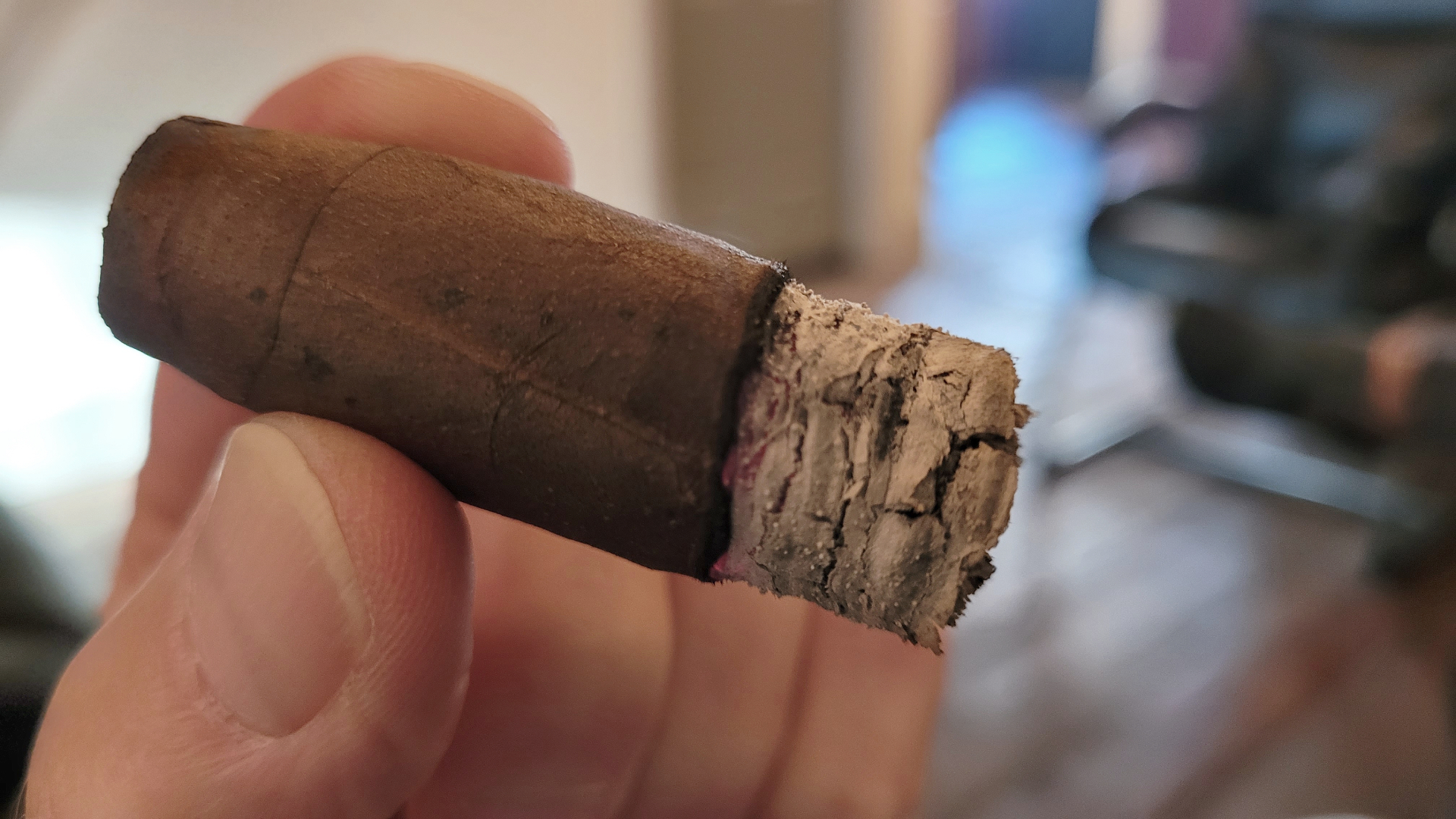 As the needle tilted into the red in body, the strength remained bold but never became overbearing. Some flavors had left the stage, but the smoke maintained a good balance. By this point, the sweetness had pretty much faded. As the Belicoso approached the final inches, the cedar, earth, and baking spices took their last gasp.

What whiskey pairs well with the Jacob’s Ladder Ascension cigar?

Espresso, for sure. As for the harder stuff, a nice bourbon that’s a little on the sweeter side.

Is the Southern Draw Jacob’s Ladder Ascension cigar worth smoking?

As excellent as the Mexican San Andrés maduro wrapper is on the Ascension, I didn’t find it as sweet as I have on other cigars with that wrapper. In this case, I think the ligero may have overpowered it a little, and maybe that was the desired effect. Southern Draw doesn’t do sweet. They do full-bodied, full-flavored, generally spicy, and they’re really good at it. Southern Draw doesn’t just make cigars, they make Southern Draw cigar smokers.

When you also consider the cigar’s smoothness, balance, and extra-long aging, the Ascension is certainly more user friendly than the mainline Jacob’s Ladders. It even lives up to its “bold but approachable” hashtag. Personally, I think it would make an excellent after dinner cigar to be savored slowly with a sweet bourbon or whiskey. Even Robert Holt says the Ascension is “intended to be smoked patiently, allowing the tobaccos to warm gradually so you can appreciate the transitions in body and flavor as you would a pint of Guinness or their favorite IPA Stout.”

Finally, it’s not for beginners, but if you’re curious about how extra ligero impacts a blend like this, or if you love dark, refined, rich tasting Nicaraguan blends, the Ascension is gonna do right by you.

Reading Time: 2 minutes #nowsmoking: check out our Oliva Inferno Melt cigar review, and why this Maduro is getting compared to all the good things about Perdomo and Henry Clay. Click for the tasting notes on this Churchill and more, delivered in under 2 minutes…