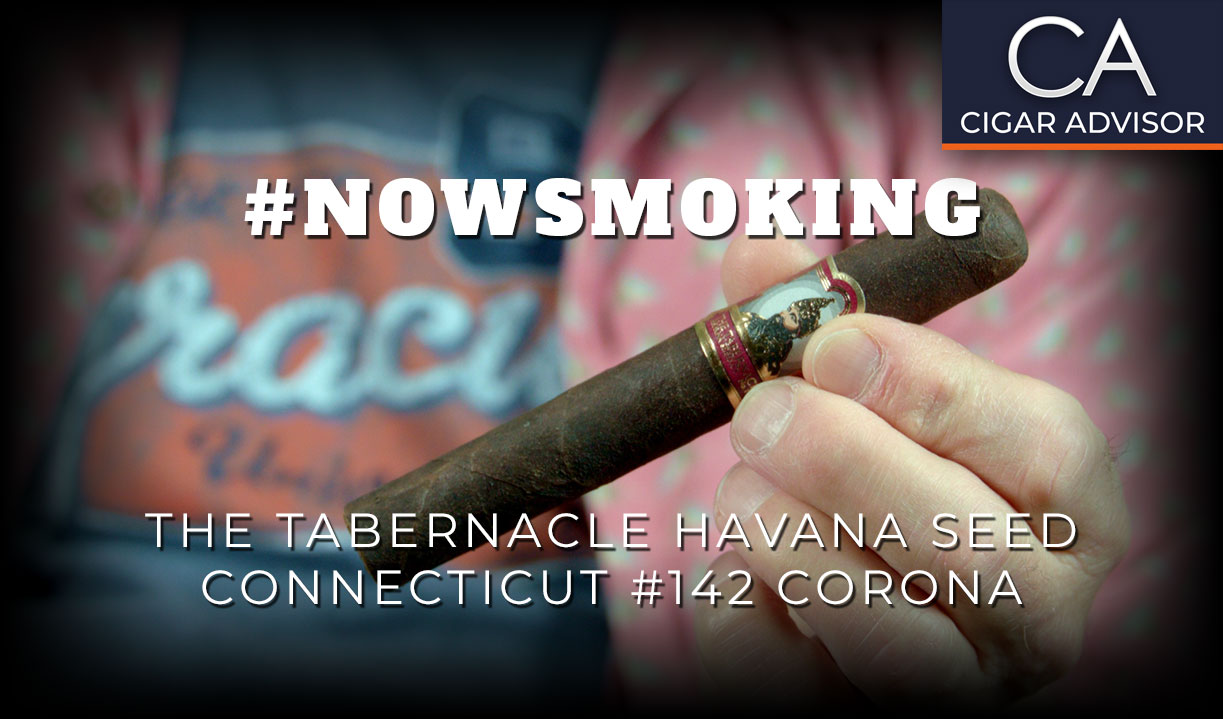 If there was a poster child nomination for small, heady cigars, the Tabernacle Havana Seed No.142 Corona would be my pick. Following a sweet n’ salty cold draw overture, pepper, underscored by a tweak of sweetness, gets this well-built number off to a spicy light. Once it settles-in, some sweeter elements emerge, as the pepper travels just below on a separate track – and a wide track, at that. This is a very full and chewy smoke that portrays the very definition of robust. Core flavors of black pepper, damp earth, cedar, and sweet spice prevail in a tightly-knit ball.

By the midsection, more earth emerges, as the sweetness begins to fade, leaving a well-balanced trail of bold, spicy, woody, and earthy smoke in its wake.

Entering the final third, I was about ready to say, “This cigar’s a little much for me,” when it suddenly switched gears. Like the U.S. Calvary with bugles blaring, the sweeter elements come charging back to save the day. The cigar finishes with notes of sweet spice along with that never-ending tide of pepper.

Smokers who enjoy dark, bold cigars with a wide berth of spice will assuredly gravitate to this Corona. One can only imagine what’s in-store among the bigger sizes.

Nick Melillo, founder of Foundation Cigar, is the brainchild behind The Tabernacle Havana Seed No.142 cigars. It also stems from the work of the Connecticut Agricultural Experiment Station. Based in the Connecticut River Valley, the group started in 1875, and over the years has produced some of the finest Connecticut tobacco varietals. Nick began working with River Valley farmers in 2014 to develop this wrapper varietal, which forms the backbone of the Tabernacle 142 selection.

“The seed is extremely rare and unlike any other tobacco in the world,” says Nick. The plant also produces such an abundant amount of oil, it requires three years to fully ferment. The result is a very dark, reddish-hued wrapper leaf with plenty of earthiness and natural sweetness.

The cigar is well-built; evenly-packed, but my sample felt very tight. The wrapper was dark and oily with some shadowy tiger stripes, and fashioned with a three seam cap. The pre-light flavors had a tempting sweet n’ salty taste. Once lit, the tight feel of the cigar offered little if any resistance, resulting in an effortless draw.

The smoke flows freely from the foot through the head, and the first few puffs revealed a dense amount of smoke with a heapin’ helpin’ of black pepper and a trace sweetness, while the aroma leaned toward the sweet side. The burn started-off a little wonky, revealing a firm and mostly grey ash. I resisted giving it a touch-up, but after the first ash left behind a sharp angle, I had to. By the end of the first inch, the burn line evened-out and never looked back.

Black pepper, damp earth, cedar, and sweet spice formed the core flavors, while the retrohale pinned the needle with red pepper. All-in-all, the flavors held tightly together for a well-balanced smoke throughout. By the time I got down to the final inch, the cigar was just one big ball of full-bodied spice. That said, the cigar was redeemed by some last minute sweetness.

Since this is a short cigar with little wiggle room, I found this Corona mostly an amalgam of the aforementioned flavors. Once they coalesced, they remained so for the remainder of the cigar, rather than having the peaks and valleys that come with more complex cigars.

This cigar craves intensity. Espresso may be a better fit than the coffee with cream and light sugar I paired with my sample. On the potent potable side, I think a long-aged Port would help scale back some of the peppery spice, and I feel the same would go for cigar smokers who prefer Bourbon over Scotch.

For cigar smokers who’ve been following Foundation Cigar Co., The Tabernacle Havana Seed No.142 Corona is a must-smoke, and that includes full-bodied, spicy cigar hounds. Newbies might want to start with Charter Oak cigars in the maduro wrappers to get a taste for Nick’s Connecticut Broadleaf, which is among the best, and take it from there.

At around $9.00 a cigar (at press time), this Corona makes up for its smaller dimensions in its quality of construction, bold flavor, and the rarity of its wrapper. Those assets alone make it humidor worthy. The cigar also smoked close to an hour on a pretty even keel, but that last inch is a doozy.

Read More
Cigar Buying Guides
Craving a tasty premium cigar, but don't have an hour to enjoy one? Here are our top 10 picks for small cigars: big hand rolled flavor, when time is short.
Read More