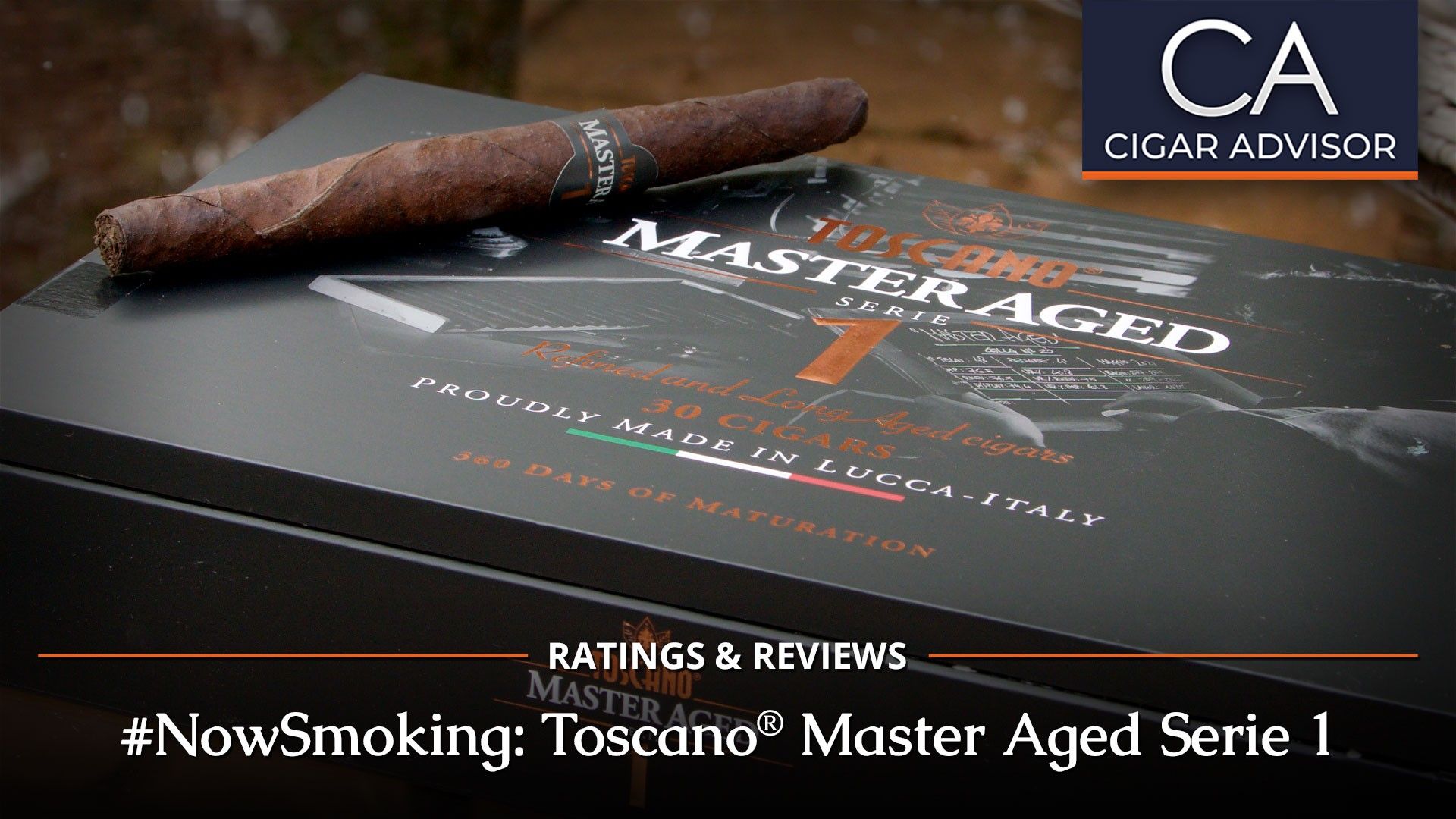 Presented in boxes of 30

The concept behind the Toscano Master Aged series was to create a unique blending process to which an extra maturation period for the tobaccos was developed. The entire process is managed by an affinatore, that’s Italian for a “Master Blender.” The Serie 1 cigar reviewed here is one of three new Toscano Master Aged cigars. Also in the release are Serie 2 and Serie 3. All of the cigars are rolled to the same 6¾” x 40 dimensions. Each blend offers different flavors and strength and here’s how it works… 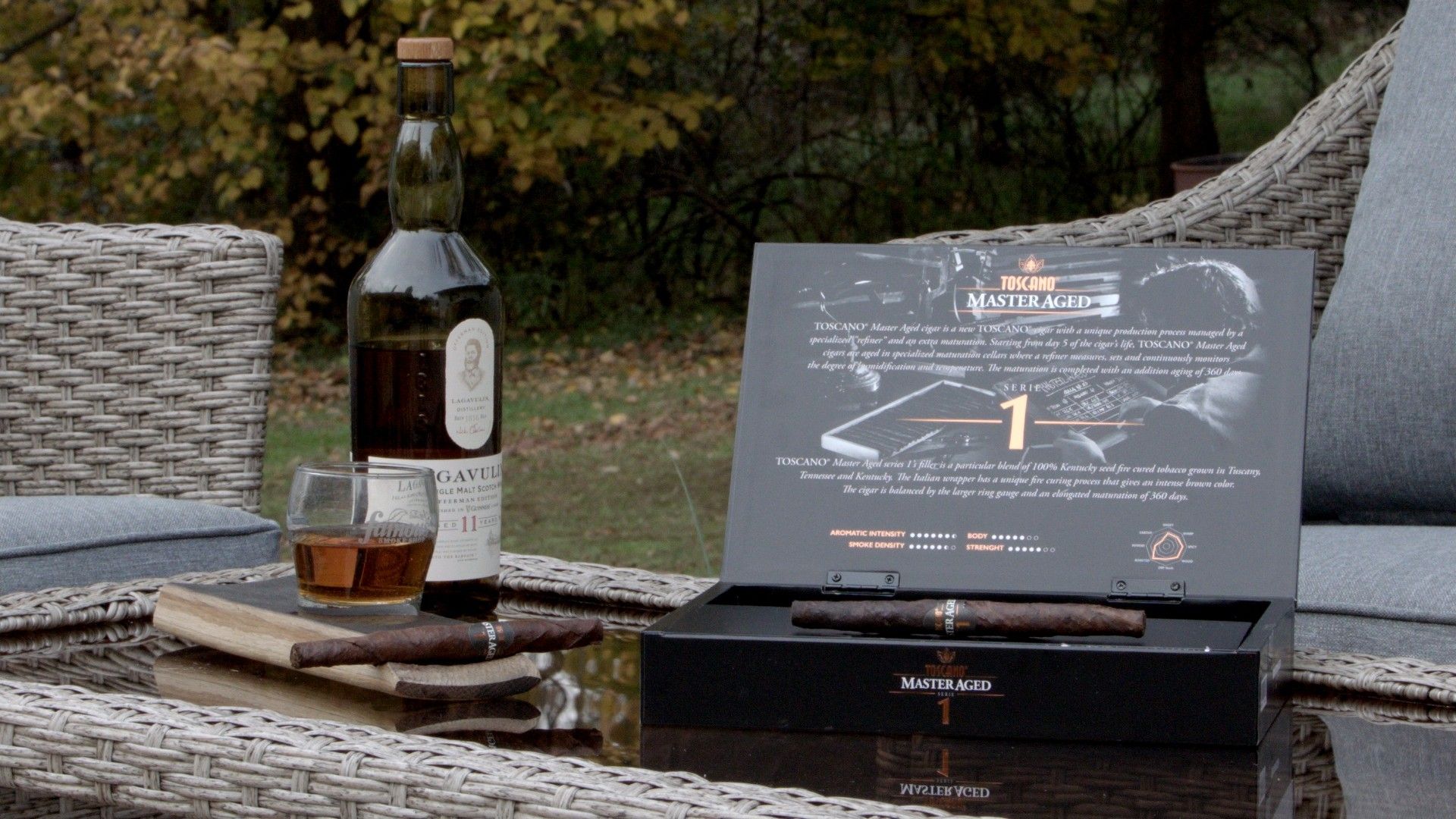 Starting from the fifth day of maturation, the tobaccos are checked daily and their specific humidity and temperature standards recorded. These standards are constantly maintained to ensure that each Toscano Master Aged cigar smokes and burns perfectly. This maturation process goes on for 360 days in special maturation cells that are dedicated to these particular Master Aged blends. Plus, the Toscano Master Aged Series cigars undergo an extended drying process that is much longer than that of the standard Toscano Cigars. Also, because the Master Aged cigars are not as resilient as many other Toscano boxed cigars, the company suggests that they be kept humidified to prevent over drying.

Construction: Very well made. The wrapper is particularly rustic, which is also traditional, and has an oily texture.
Cold Draw: Smoked hardwood.
Base flavors: Fire-cured hickory and pure tobacco.
Aroma: Raging campfire.
Burn & Ash: Excellent burn, especially for such a small cigar. The ash was also quite firm and very dark grey in color.

NOTE: The Master Aged cigars, as rolled, are 6¾” x 40; this is also a slightly larger ring gauge than Toscano normally rolls. Keep in mind that it may be smoked as-is, like a very skinny perfecto. However, they are traditionally cut in the middle as I did in the video so they can be shared with a friend. In that case, you would have a cigar that’s just short of 3½” x 40. Also, I did not smoke the usual sample prior to this review. Rather, I decided to smoke it “live” on-camera and let the chips fall where they may. I wasn’t even sure you could break this cigar into three sections, but for consistency we’ll follow the format. 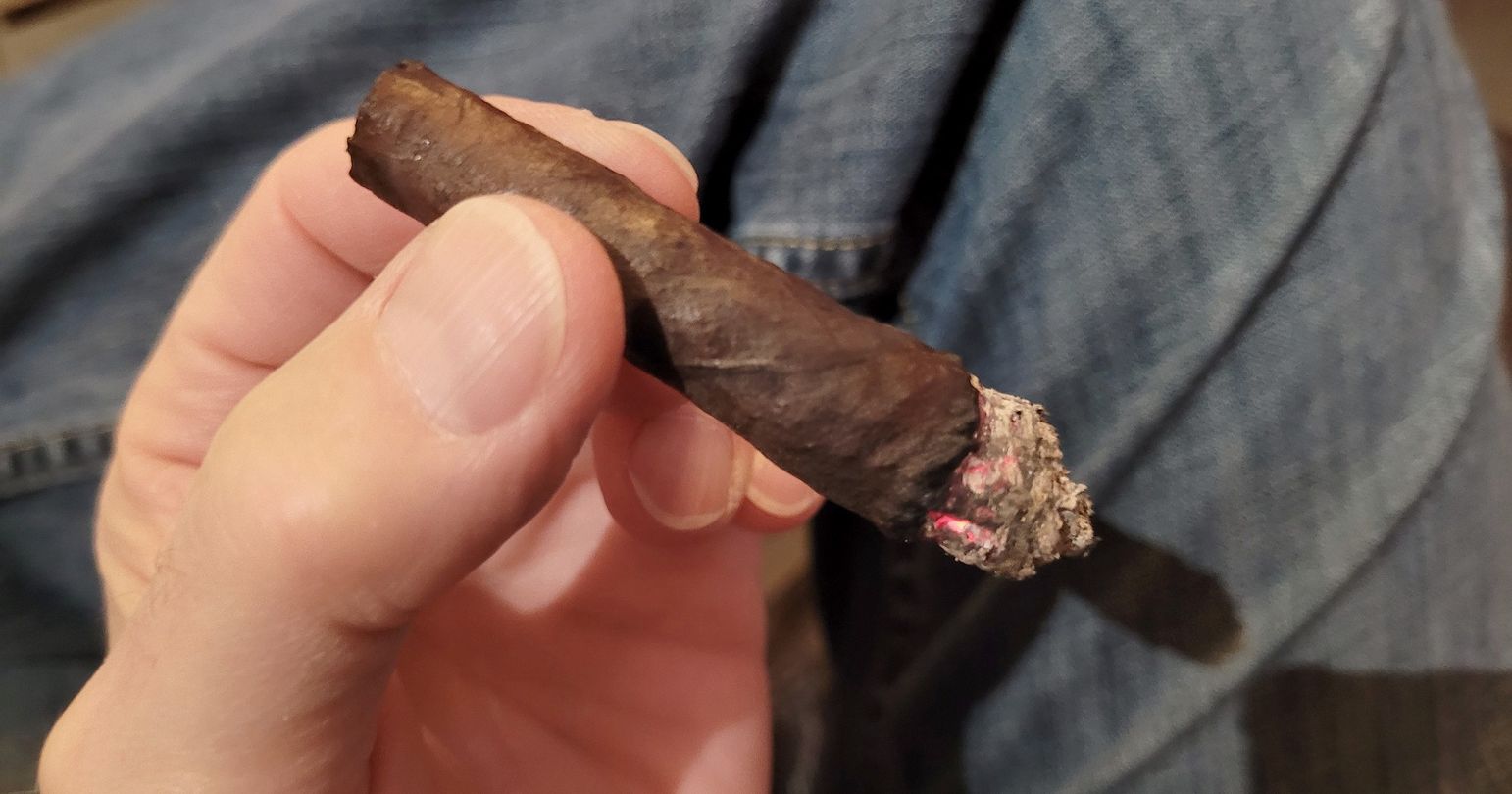 Once lit, the initial puffs issued a surprisingly smooth mouthfeel and that classic fire-cured tobacco flavor—mostly hickory to my palate. Toscano did say in their press release that the Serie 1 was a full-bodied blend. Yet, I have to give credit to the extra aging. It began smoothly and remained smooth through the first inch or so. I did get some sharp smoke up in my sinus which had a little kick to it. 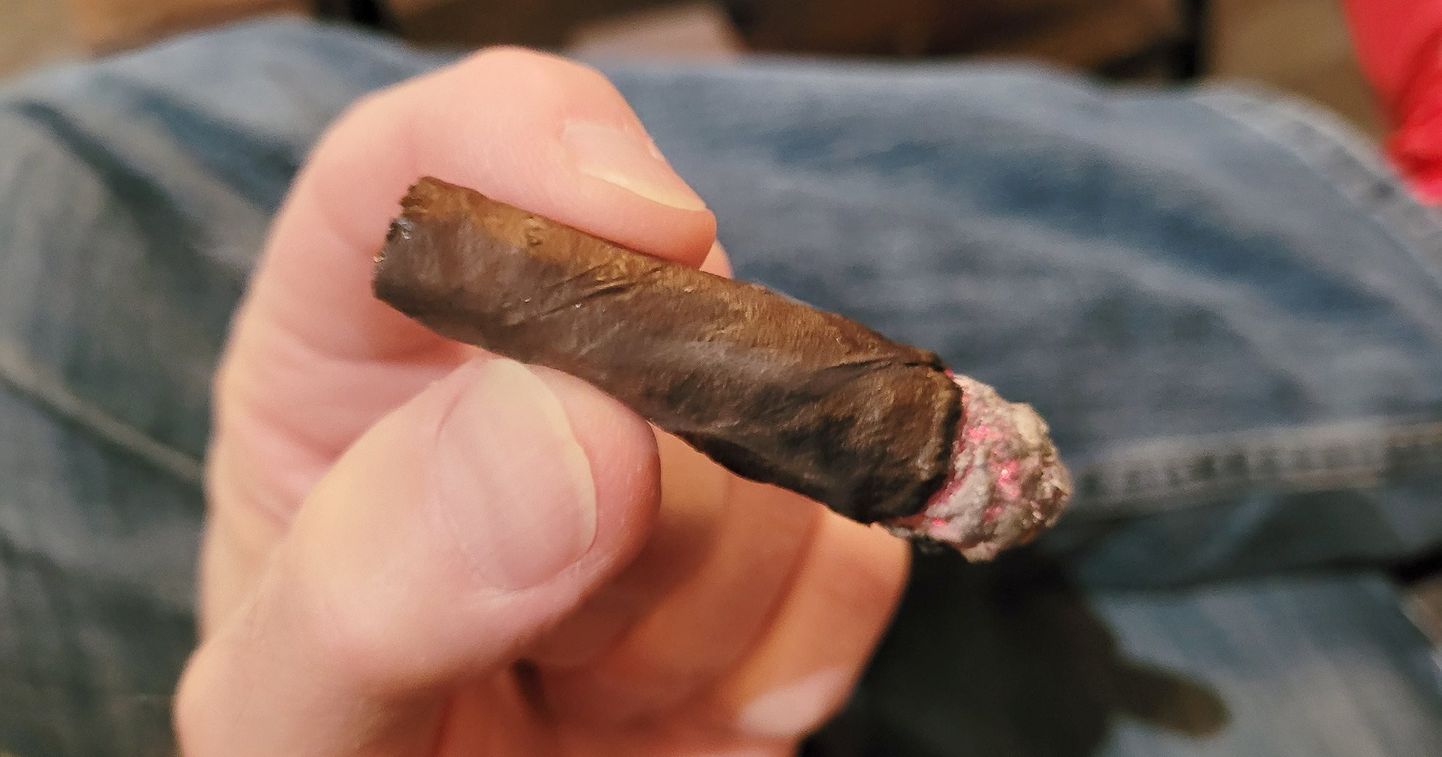 Got some excellent smoke volume up to this point and it didn’t look like it was going to stop anytime soon. The ash has remained nice and firm. I hardly ever retrohale these days, but with this little number I couldn’t resist. I also wanted to see if I could pick up any additional flavors.

Even that was smooth as silk. What I was tasting at this point was something I could only call “pure tobacco.” So far, the smoke has been easy on the palate and very relaxing. 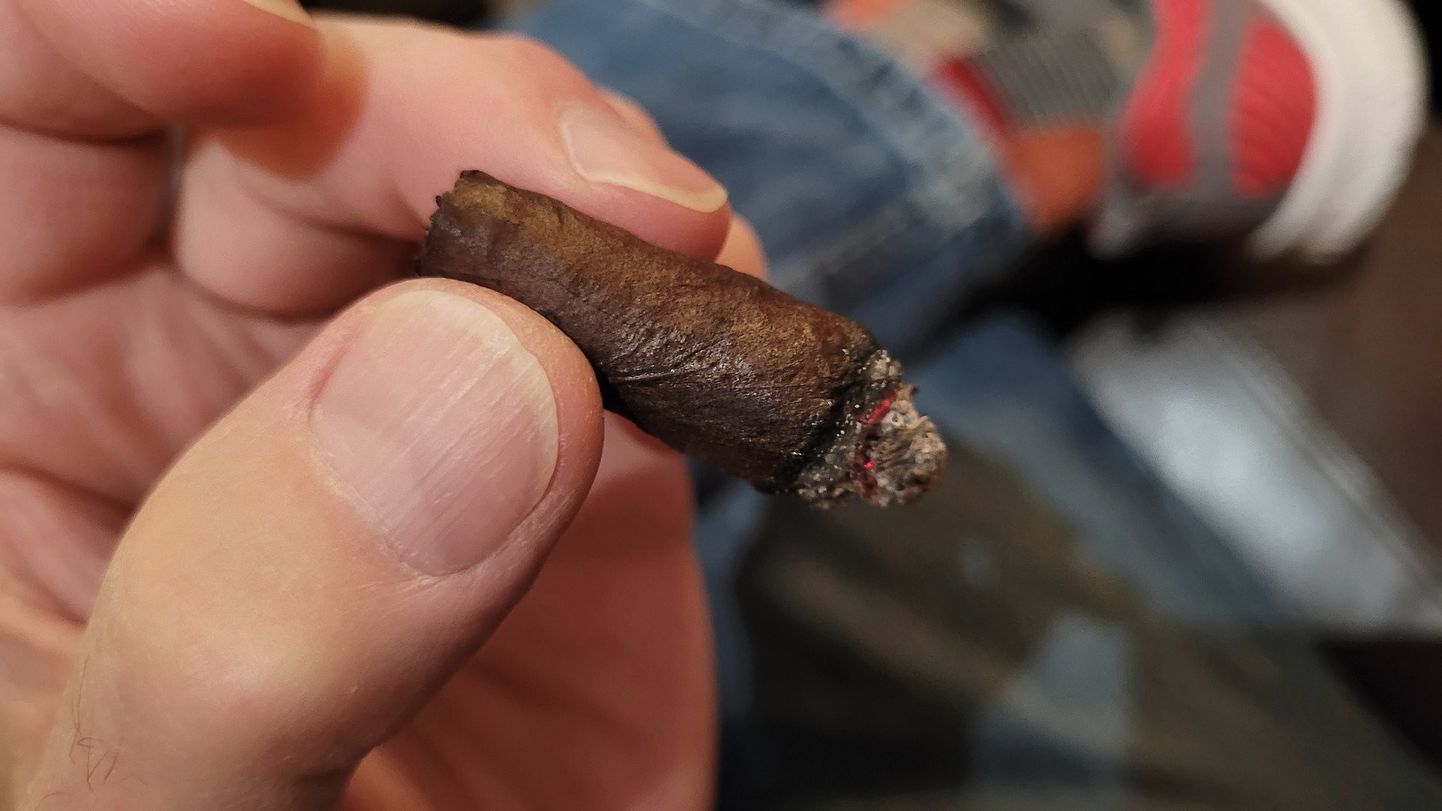 I took this Serie 1 just about down to finger burn stage. That’s mainly because the cigar had been so smooth and teeming with rich tobacco flavor. I even picked up a little sweetness at this stage. Plus, I continued retrohaling the smoke, which seemed to come naturally. For that matter, I had to put it down with about half an inch left.

What beverage pairs well with the Toscano Master Aged Serie 1? 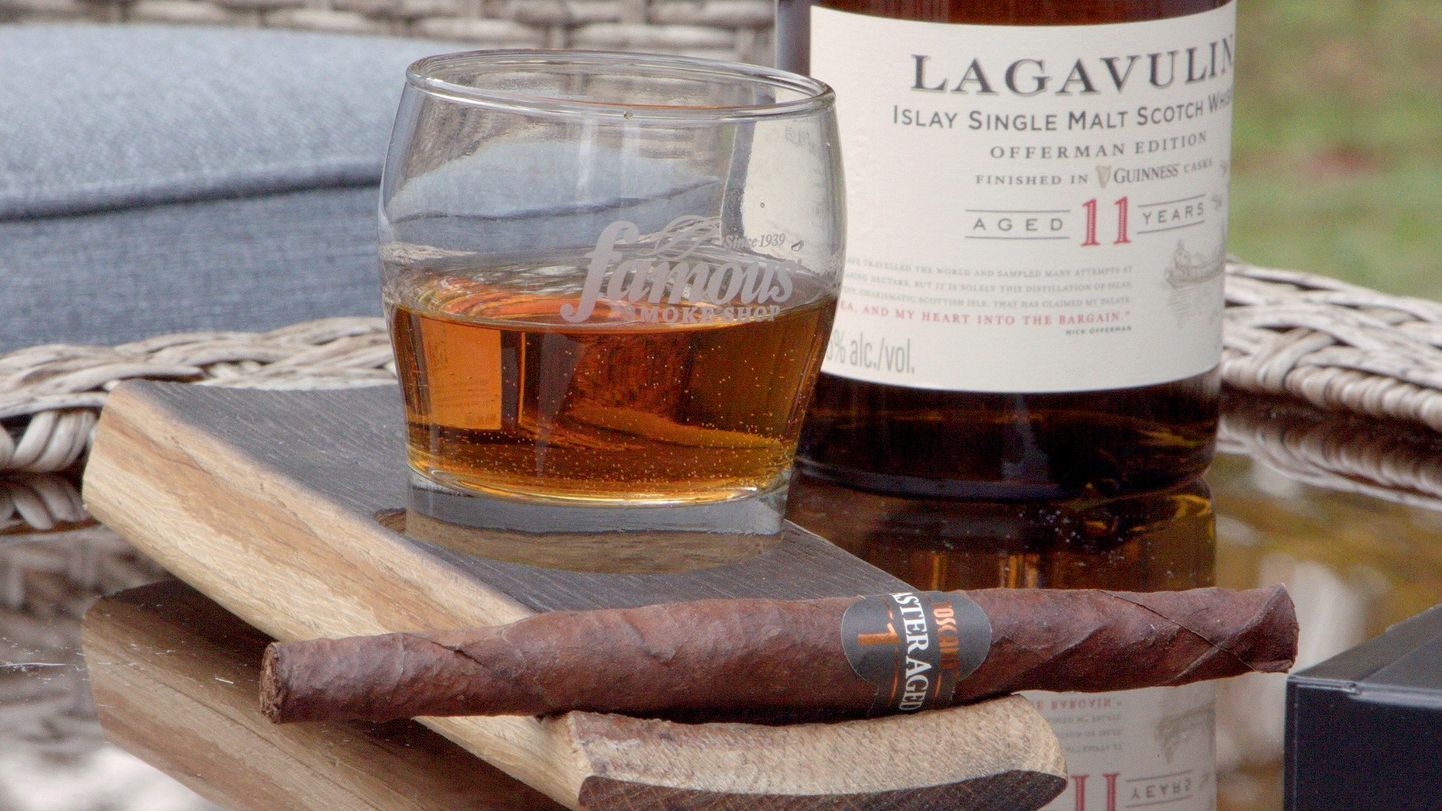 I would say, a good bourbon, and a flavorful one at that. I had my Toscano Master Aged with espresso and it almost seems like it was made for it. These are often smoked after dinner as a dessert cigar with a coffee but suit yourself. Whatever you choose, drink it straight.

Is the Toscano Master Aged Serie 1 cigar worth smoking?

What really impressed me about the Toscano Master Aged Serie 1 was the extra year of aging the tobaccos were treated to. It was so smooth, I almost wished I had smoked it without cutting it to buy me more time. I found it to be an excellent after dinner smoke. Just the right size and just the right amount of time you need for after a good meal.

All-in-all, I didn’t find the Serie 1 very full or intense in strength as advertised. But it did make me want to try the Serie 2 and Serie 3 for comparison. For those who have not had this type of cigar, the Toscano Master Aged is worth a try. Now with winter happening in most of the country, at 3½ inches it will come in mighty handy. Plus, if you’re smoking alone, it’s nice to know you’ve got another half waiting for you.

Always enjoy reviews which take place during the first tasting.

Reading Time: < 1 minute This H. Upmann by AJ is “built like a tank” while “the smoke is quite dense offering notes of earth, oak, and leather.” Click and get the full rundown on this cigar in under 60 seconds, in our H. Upmann AJ Fernandez cigar review…