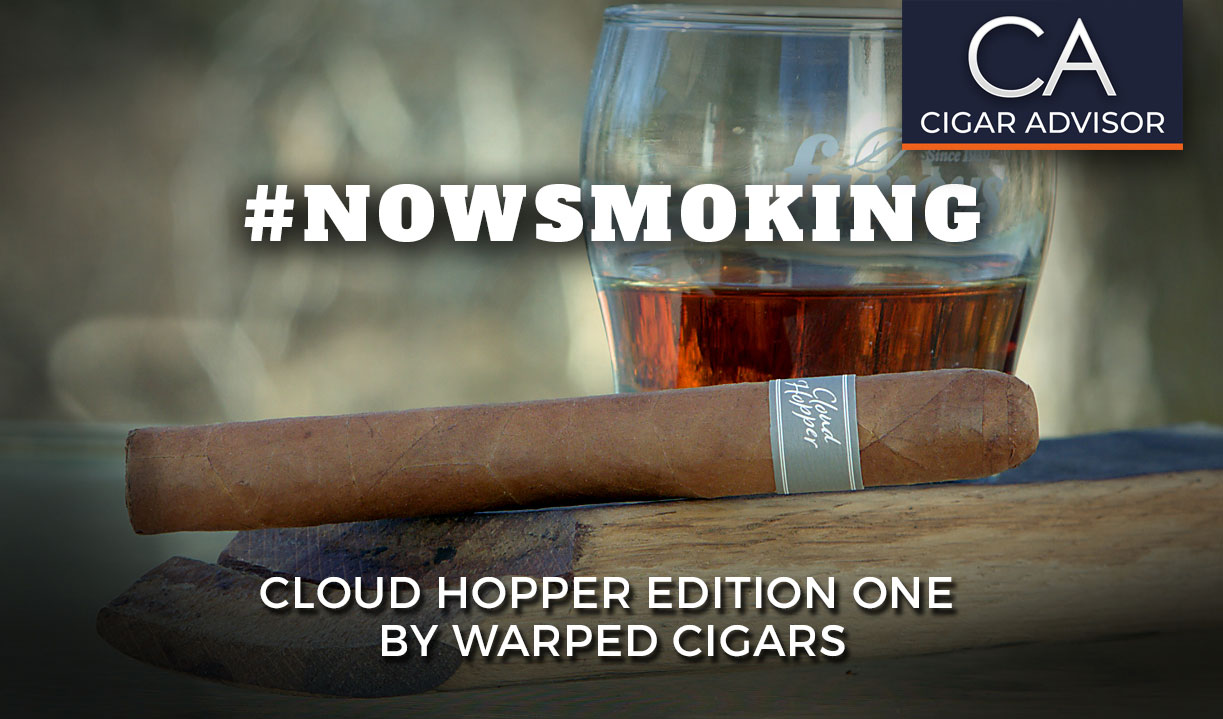 Presented in boxes of 50 cigars

Cigar makers travel a lot. Usually by air. Kyle Gellis of Warped is certainly no exception. Along with his brother Devin, he’s logged some serious air miles traveling to cigar shops near and far. Not to mention events and trade shows. Those long days in the sky were an inspiration to Devin. He proposed to his older brother that they make a cigar in tribute to their time in the clouds. Kyle agreed and Cloud Hopper was born. 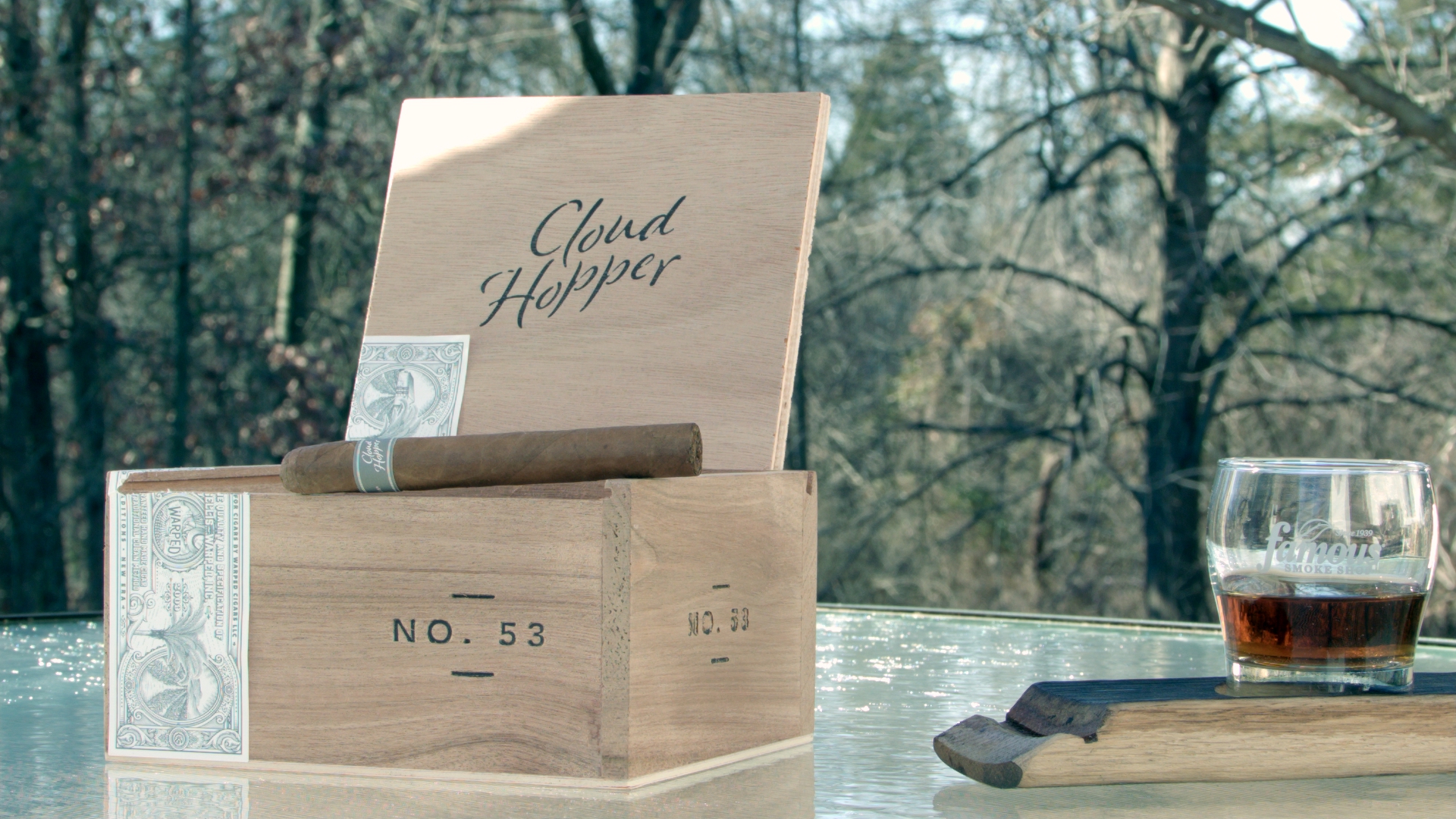 Like most of Warped Cigars’ boutique cigar creations, Cloud Hopper is made by Aganorsa Leaf in their Nicaraguan TABSA factory. It also includes Aganorsa’s coveted tobaccos – their signature Corojo and Criollo in a puro blend. What sets the blend apart is its price. Devin also wanted Cloud Hopper to be affordable for the masses to enjoy.

I’ll be smoking the Corona which they call No. 53  (Gary smoked the Robusto in 2019) for my review. It’s not a new stick for me; I’ve burned Cloud Hopper a few times in the past and have enjoyed each one. In this cigar review, I’ll tell you what I like about it, what I don’t like about it, and detail what you can expect when you smoke it. Let me know in the comments if this sounds like a cigar for you!

Construction: Golden brown, smooth, and well-rolled. Has an oily sheen and a couple of pronounced veins.
Cold Draw: Fig and spices.
Base flavors: Sweet tobacco, molasses, earth, wood, and lots of pepper.
Aroma: Reminded me of a campfire.
Burn & Ash: Ash is slightly on the darker side. Holds well. No burn issues. 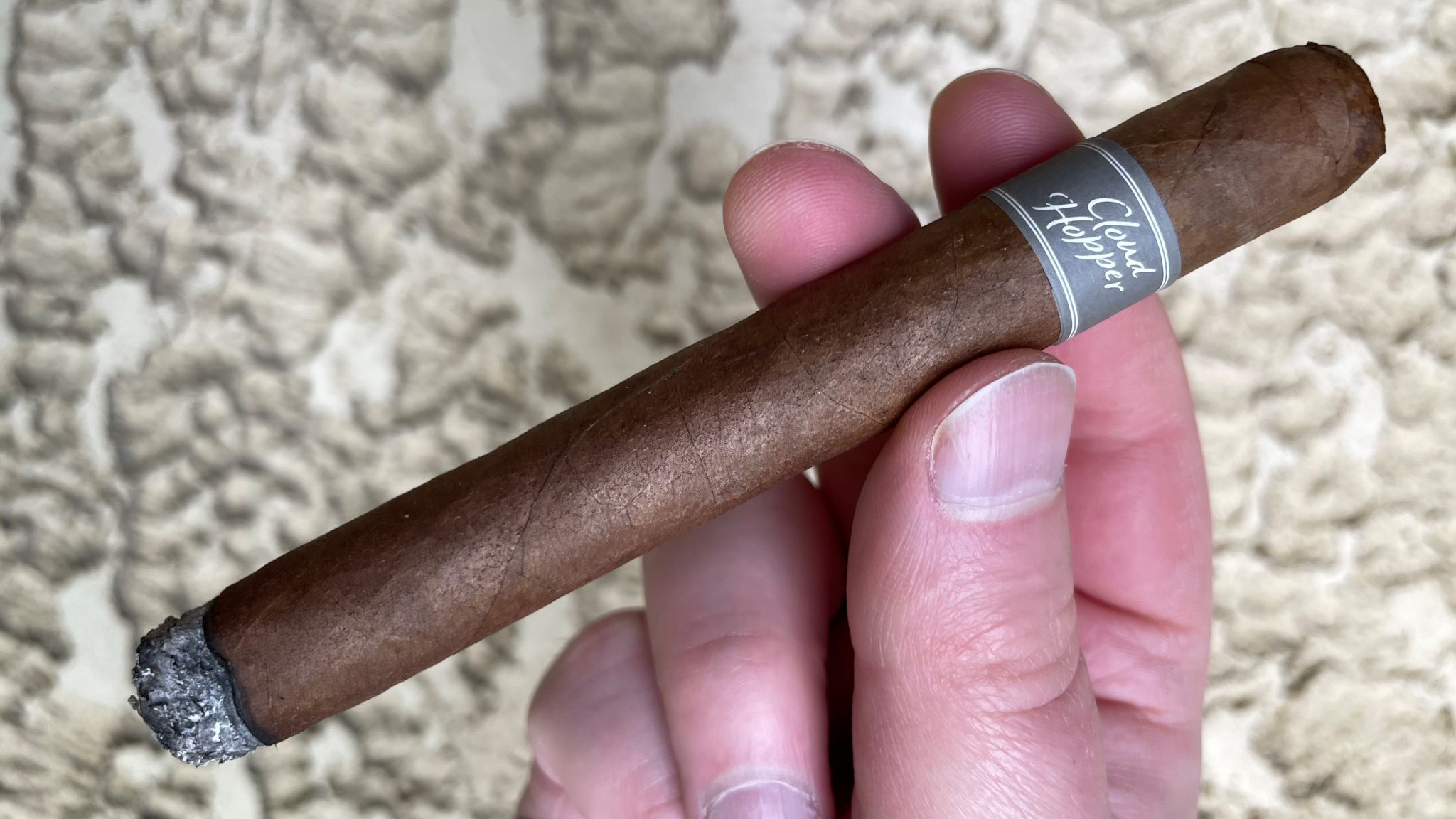 If you’re wondering if Cloud Hopper is a strong cigar…yes. And its initial blast of pepper definitively sets the tone. No surprise there. It’s a Nicaraguan puro cigar, after all. Within half an inch of burn time, sweeter notes begin to emerge. I get a faint note of molasses, a blanket of sweet tobacco, a little damp earth, and lingering spices with a long finish. The retrohale is intense, yet sweeter, so you’ll want to take it slow. You could even call it a ‘sipping cigar’. No need for big gulps of smoke. A little goes a long way. 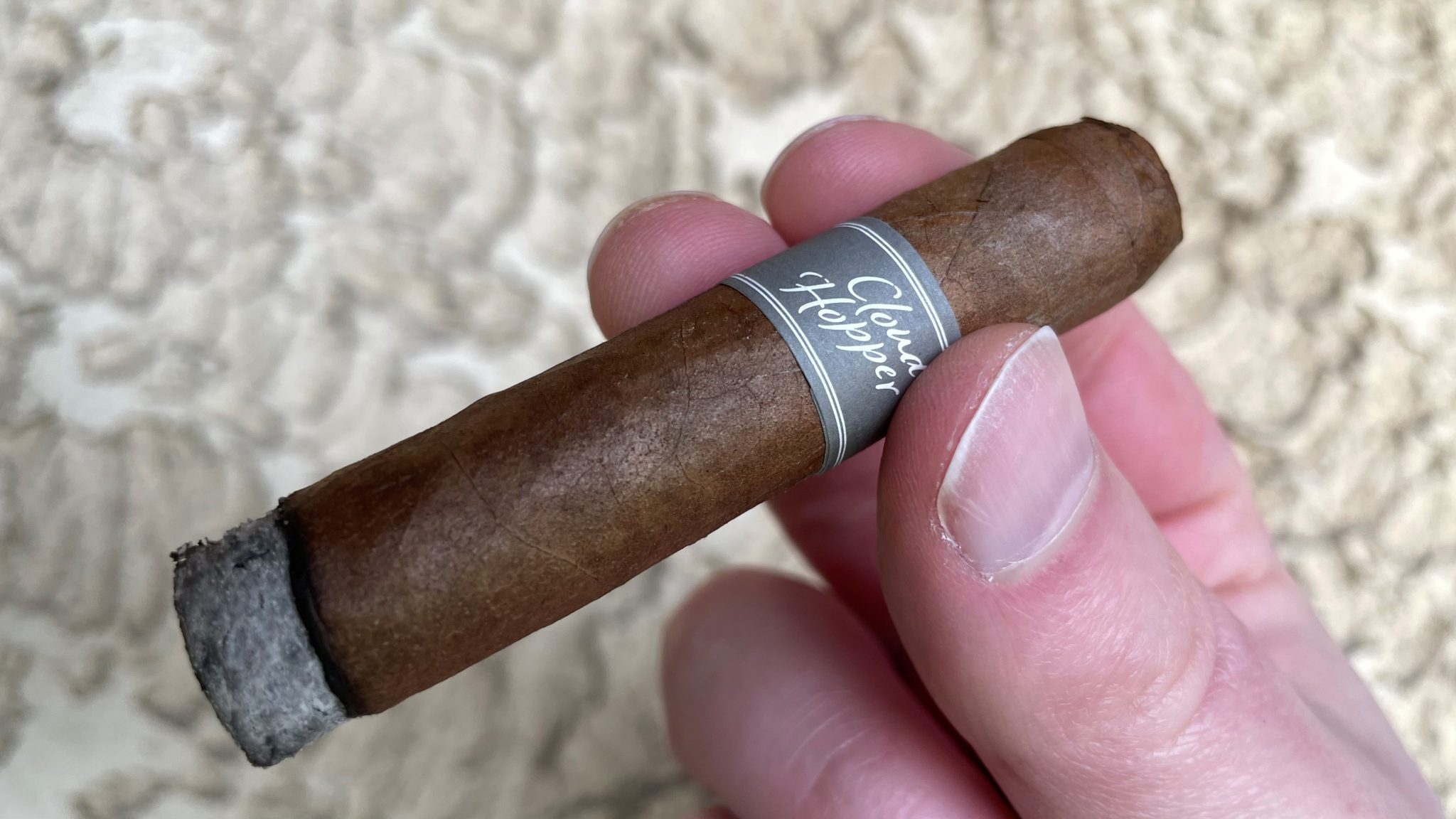 The profile at the halfway mark is woodier, lighter on sweetness, and more potent in both body and strength. You’ll be feeling Cloud Hopper not just on your palate, but in your belly, too. I have to slow my smoking down with it quite a bit, only puffing once a minute or so (that’s a really long time for me). There’s still lots of pepper and spice, and lots of bright flavors, too. Let’s just say that it lives up to its Nicaraguan upbringing. 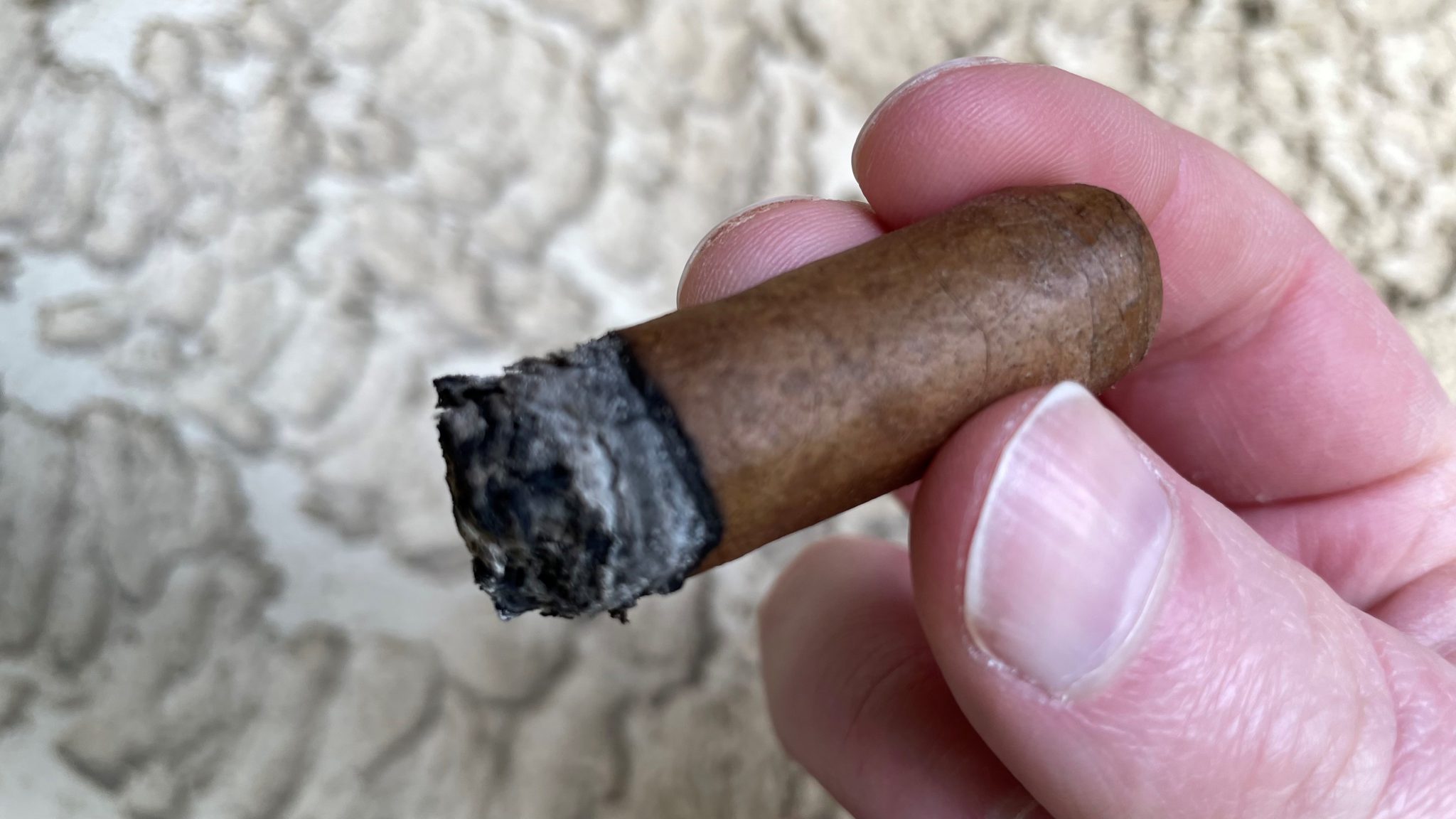 Toward the end, if you keep the pace slower as I’ve suggested, Cloud Hopper finally settles down a little. Most of the heat is gone and the finale is more earthy than anything else. It gets a little bitter. But nothing so extreme that it made me put the cigar down. Some of those initial notes of molasses pop back in here and there – making it worth sticking around for the credits. 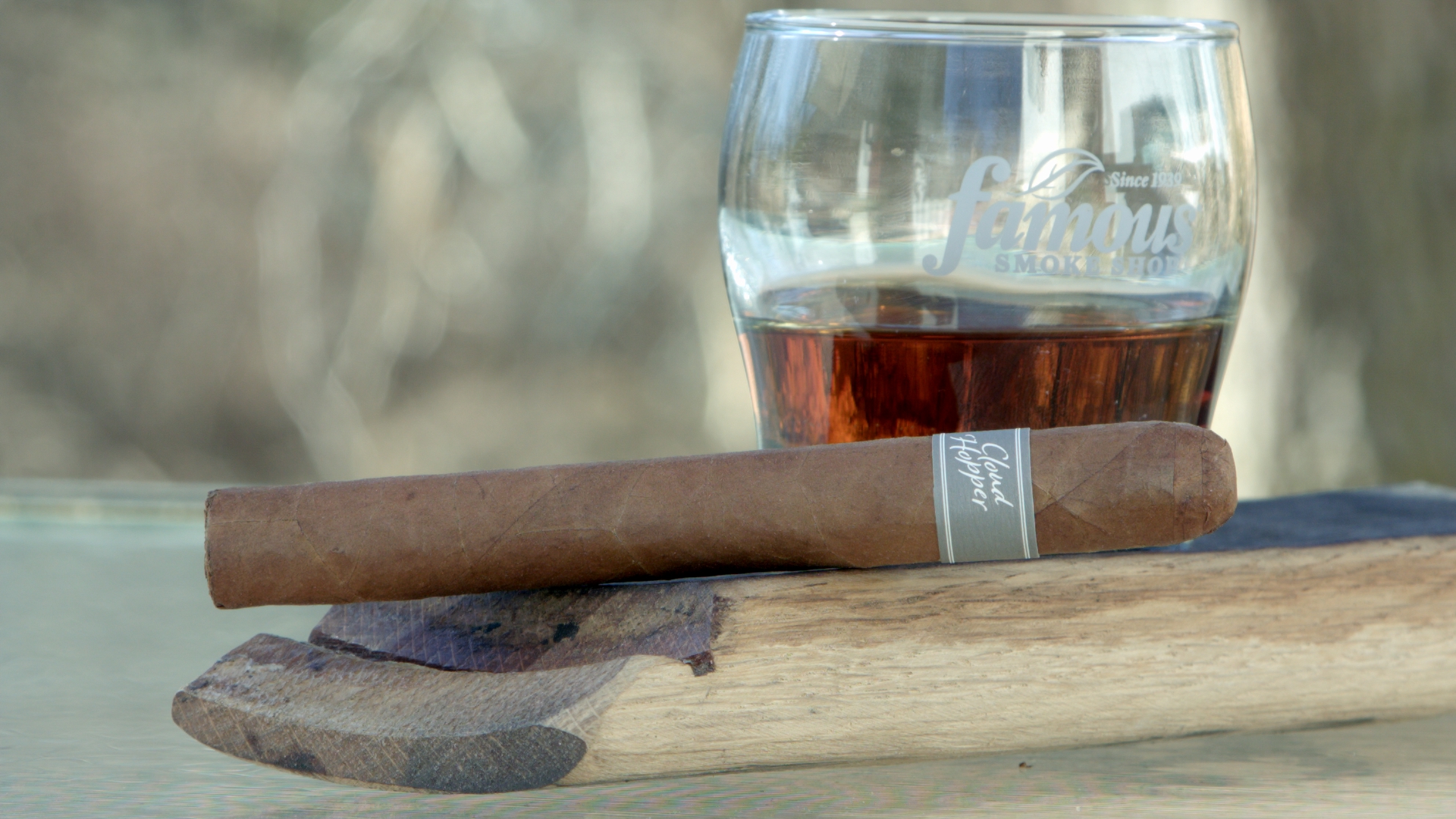 I’d go with a stronger, smoother bourbon like Woodford Reserve. It’ll help keep the blend’s pepper and spice in check, without overpowering the cigar’s flavor. Plus, Woodford’s notes of vanilla and caramel complement Cloud’s sweetness perfectly.

Are Cloud Hopper cigars worth smoking?

Cloud Hopper checks far more pros than cons, especially if you’re a full-bodied fan. And at *less than $7 bucks a stick, I’ve had far worse. My biggest gripe is that it’s easy to get it burning too hot, which can make things bitter pretty fast. If you consciously take your time, you’ll have a better experience than this short money normally affords.

*Prices may change over time.