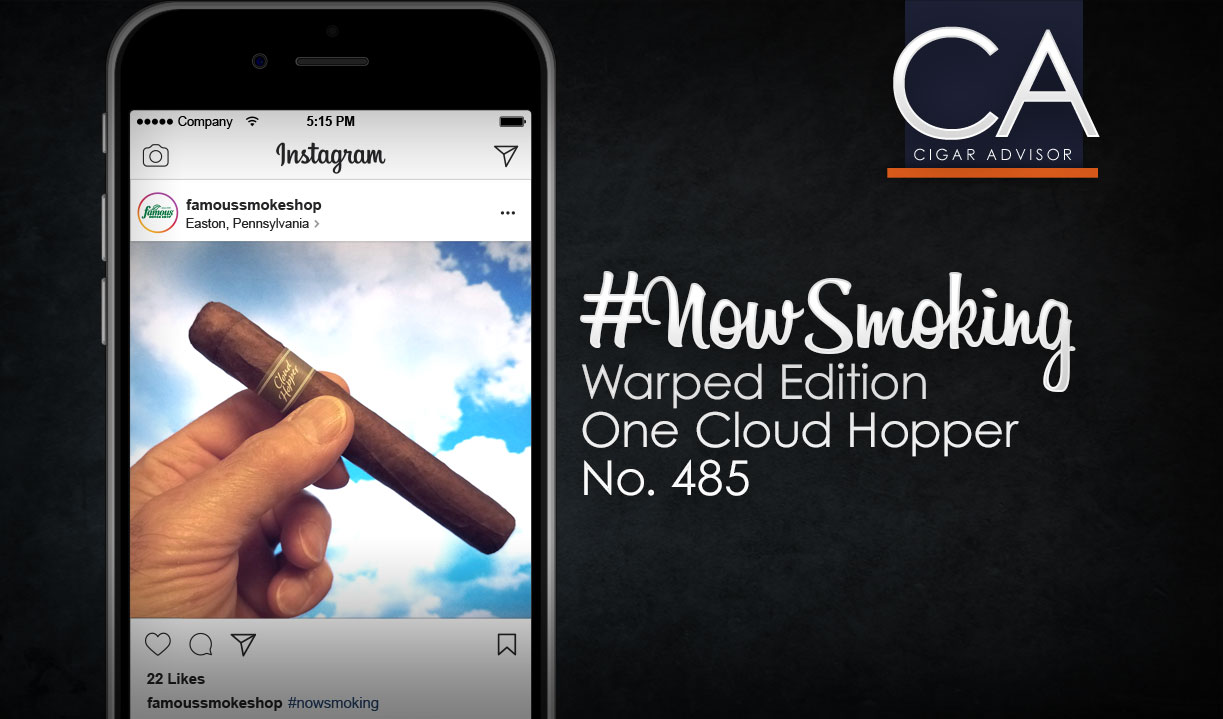 Where it’s at: Created by Warped Cigars founder, Kyle Gellis and his brother, Devin, the Warped Edition One Cloud Hopper selection was so-named for the frequent amount of business travel each of them do. As the story goes, when they get together, they share tales of their experiences, which they call “cloud hoppers.”

Brought to my attention by one of my Famous Smoke Shop colleagues (thanks, Mr. Getten), the Cloud Hopper I smoked in this video, No. 485, was my first. I had no preconceptions other than the fact that this cigar was made by Warped and rolled entirely with Aganorsa Farms-grown leaf. That right there was enough to heighten my expectations.

The cold draw was especially inviting. It had that toasty, cocoa-like taste familiar to Padron cigars. However, once lit, the opening salvo of peppery spice had me thinking, “Not another spice bomb. Darn that Kevin!” But such was not the case, since after about a half-inch of that, the cigar settled into a creamy mix of lighter spices, some cocoa, and a cookie-like note that reminded me of graham crackers.

The Corojo ’99 wrapper was gorgeous and oily with a sheen that resembles Cuban Corojo. The craftsmanship was first-rate, and the cigar burned perfectly with a gravity-defying ash. However, although this cigar might pass for a Havana-made in its appearance, the flavor was definitively Nicaraguan.

The smoke was well-balanced throughout, remarkably creamy, and revealed a virtual buffet of flavors. The more dominant notes were spice, cocoa, sweet tobacco, graham cracker, plus a mix of cedar & oak on a long and lightly spicy finish.

More spice was prominent by the midsection, and the retrohale, which was significantly peppery in the first inch, issued a mostly creamy aspect with some light nuttiness. It was also at this juncture that the No. 485 convinced me of its complexity.

Even in the final stages, this Cloud Hopper remained creamy and bitter-free. Flavors of woody, earth and some nuttiness became more dominant, as the sweeter elements had gone to bed. Changing-up from coffee to water also helped to define these latter-stage flavors.

Suffice it to say. . . the Cloud Hopper No. 485 was a dream to smoke. The smoke lies somewhere in the medium-plus to full realm, and carries a fair amount of spice. That said, this cigar could be enjoyed by cigar smokers of every level of experience for its uber-creamy character, generous rack of flavors, and superlative balance. Moreover, at under $7.00, the price is right.

Reading Time: 2 minutes August and cigars go together like coolers and beers. Check out the latest cigars to land at Famous, including the Arturo Fuente Don Carlos Famous 80th Anniversary!