At this point, it’s safe to assume most cigar enthusiasts are familiar with the Oliva V. If not by smoking them, by their reputation as one of the finest full-bodied and creamy Nicaraguan cigars available.

The Oliva Serie V first arrived in 2007 and was immediately successful. So much so, that over time the line expanded to around 40 different releases. These are in addition to the multiple line extensions (like the Oliva V Melanio), cigar shop exclusives, and limited editions. 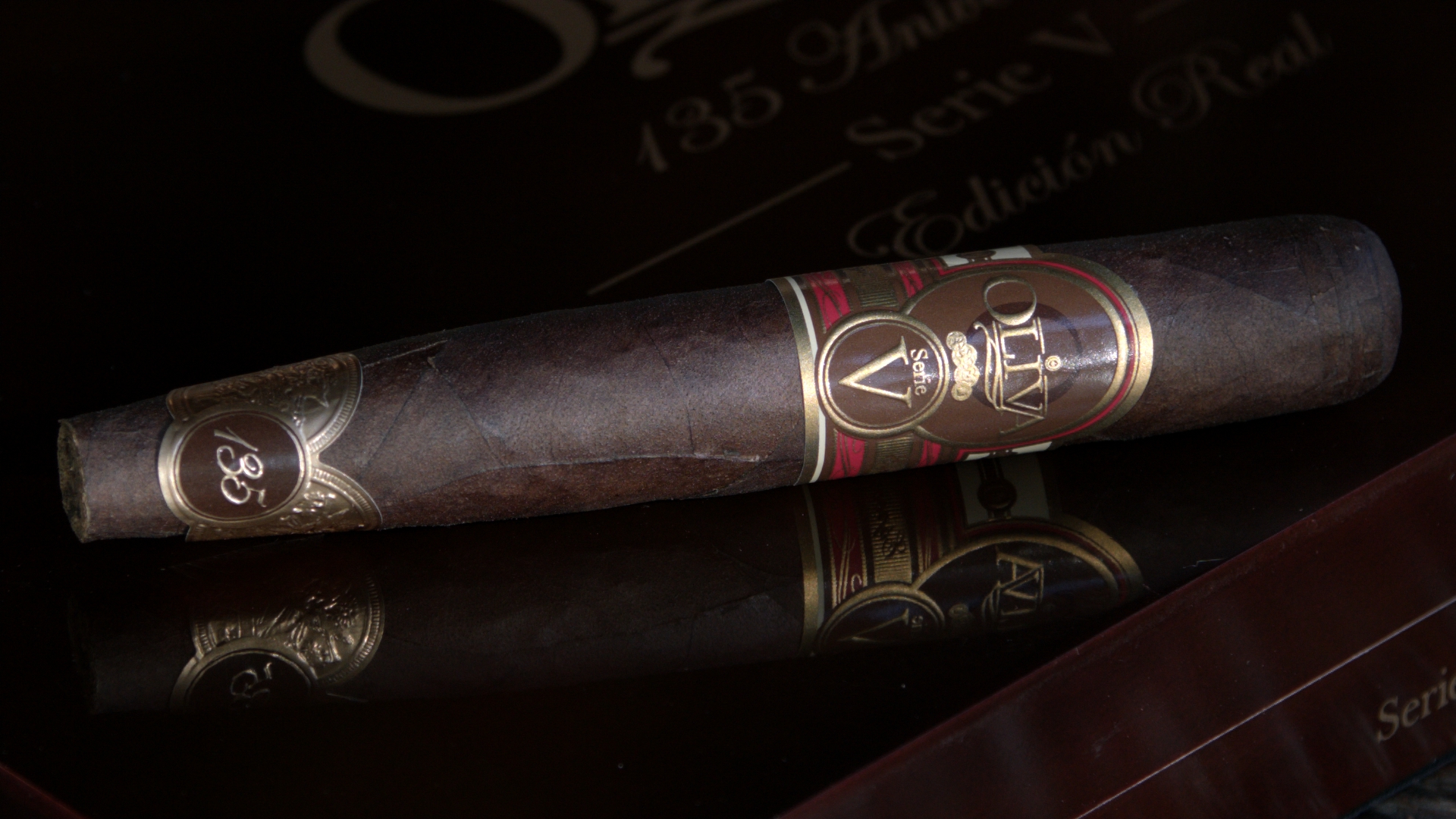 Like most tobacco families, the Oliva’s can trace their roots back to Cuba. The Oliva Serie V Anniversary Edicion Limitada pays homage to the year—1886—that Melanio Oliva first began cultivating tobacco and set the course for his family for generations to come.

And now to the cigar. Coming in an unusual 5.5 x 54 Perfecto that tapers at one end, the 135th Anniversary Edicion Limitada comes in boxes of 12 and are arranged in a fan-like manner. On the interior lid of the box there’s an image of a man harvesting tobacco. The cigar features the same primary band as the Oliva V and a secondary gold foot band with the number 135. 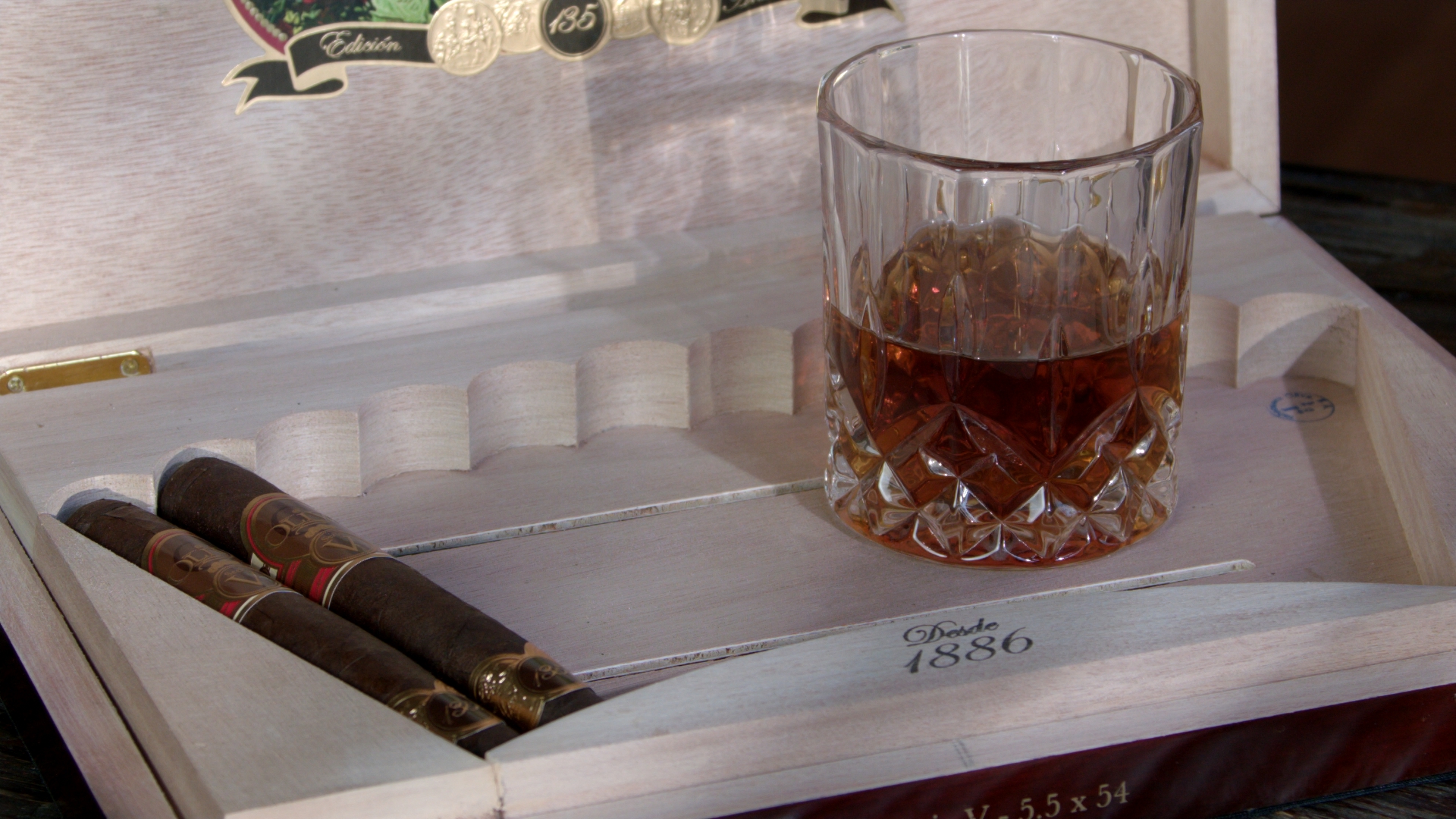 But does the Oliva V 135th Anniversary Edicion Limitada uphold the legacy of its predecessors? Check out our panel review to see if this cigar delivers the goods or is just another Serie V.

Presented in boxes of 12

Summary: The first thing that probably caught your eye here is the shape, as it’s the most obvious feature about the Serie V 135th Anniversary cigar. Even though it’s a big-feeling 54RG, I really like the shape: it’s a Perfecto, without being too Perfecto. That is, the foot is more forgiving…it’s easier to light, much easier to draw, and more enjoyable to get started smoking.

The draw is pretty open, so the Serie V 135 smokes a bit fast – a great volume of smoke, though. Tasting notes to watch out for: sweet spice, earth, a bit of citrus, earth, wood and espresso. There’s a hint of cinnamon that’s especially noticeable on the finish. 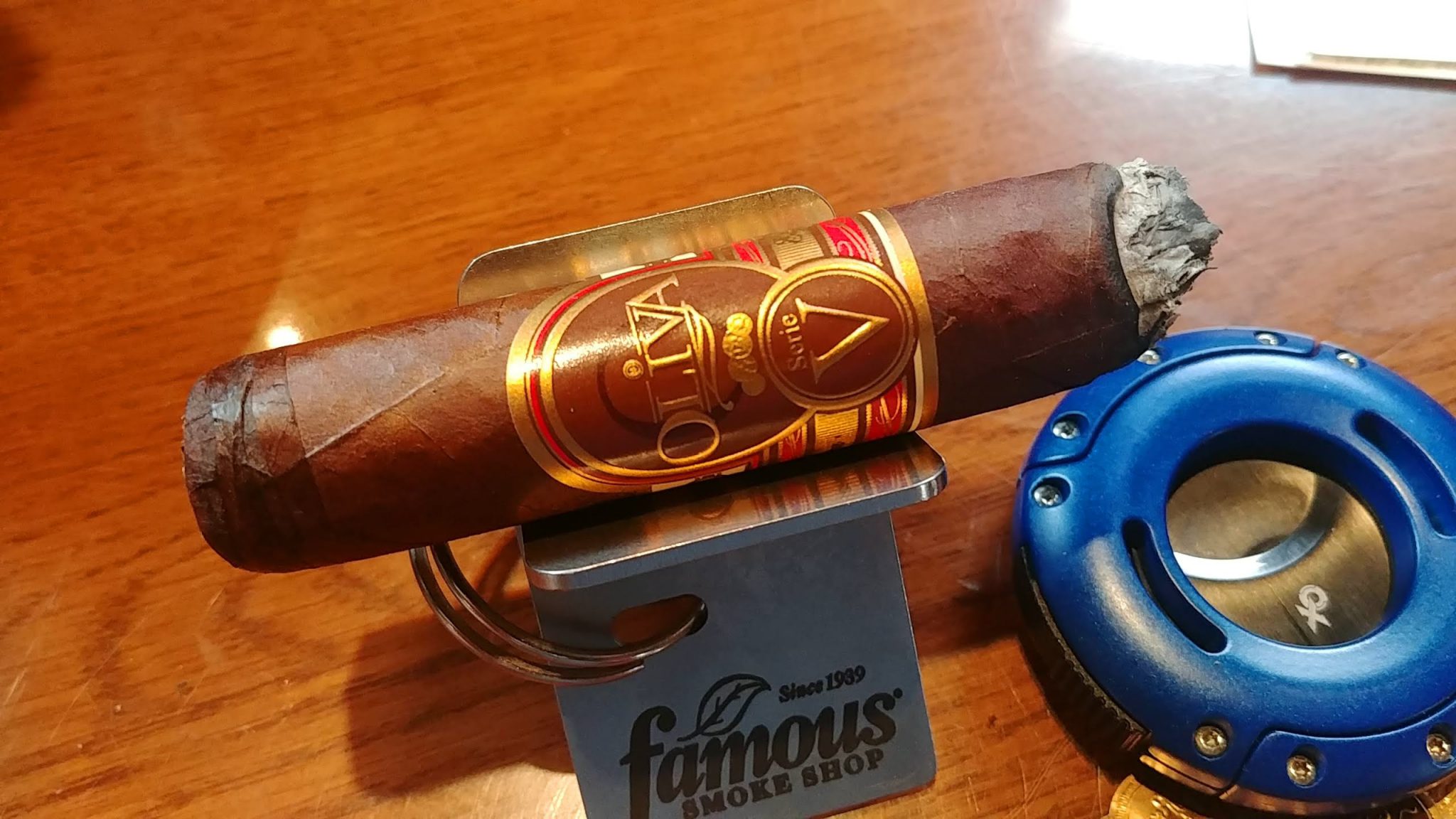 Because Oliva Serie V has always been part of the ratings discussion since it’s been around, I think it almost gets taken for granted anymore. Here, taste, burn and construction are all Grade A as expected; there’s plenty of complexity for the money, because the blend is the same. So what’s different about this 135th Anniversary? Mostly that it’s not a full bodied/full strength killer like you might have thought (it’s more medium, if anything else) – which means it’s easy to smoke. So combine the Serie V pedigree with the uniqueness of the 135th Anniversary cigar’s shape, and you’re getting a lot of cigar for the money. It’s actually a celebration cigar, on the cheap. Which should be music to the occasional cigar smoker’s ear.

Summary: We’re barely into 2022 and I’m already talking about the best cigars of the year. Because I have a feeling that Serie V 135th Anniversary is going to be on my list. It’s one of the most stellar smokes I’ve had in years…full stop.

Let’s talk about the shape. Serie V employs a unique Perfecto profile that tapers toward the foot. It’s not drastic, but when I saw it, I rolled my eyes a little. You wouldn’t call me a fan of tapered cigars. For one, I really don’t like a smaller surface area for lighting. It’s easier to scorch the wrapper. Two, and more importantly, shapes like this often create draw problems. And third, it just seems gimmicky to me, rolling oddly shaped cigars for the sake of being artsy.

But you’d better believe I was wrong. Never have I been so happy about it. 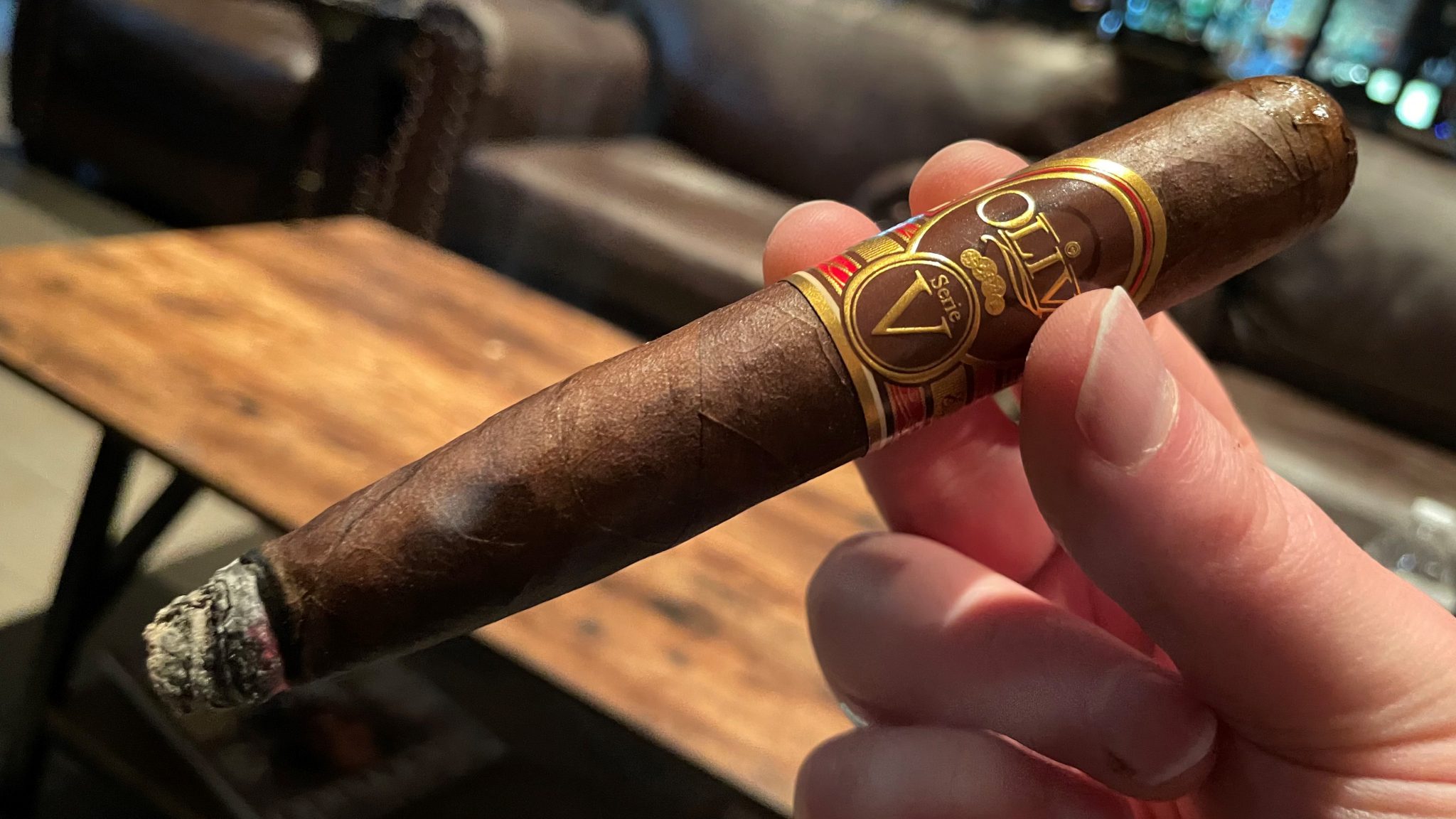 You’d think based on how cigar ring gauges affect their taste and strength that this Oliva would be stronger up front, but paradoxically, it’s mellower and gets stronger as it burns. Flavors start with an extra-large serving of coffee notes with a sprinkling of nutmeg, brown sugar, oak, and earth. There’s some spice, but not a whole lot of pepper.

Toward the halfway point, Serie V 135th Anniversary is loaded for bear, boasting a natural sweetness that tastes a lot like Corojo, some mineral-like nuances, and a finish that’s somewhat tart.

For the tail end of this Oliva session, a callback to the original coffee flavors, more brown sugar, and an earthy finish that’s refreshing and sweet. I loved it and there’s nothing more to say except that I hope Oliva decides to make this a permanent Serie V vitola instead of a merely limited edition run. In other words, “shut up and take my money.”

That question came to mind immediately with this cigar since the only thing differentiating the Oliva Serie V 135th Anniversary Edicion Limitada from the mainstay Oliva V is the shape. The blend is identical to the regular production, so let’s talk about the shape for a minute.

The cigar is a unique vitola and looks like a pencil or a miniature baseball bat—in that it tapers at the foot only. The foot of the cigar resembles a Lancero in ring gauge before it increases to the diameter of a large Robusto or Toro. 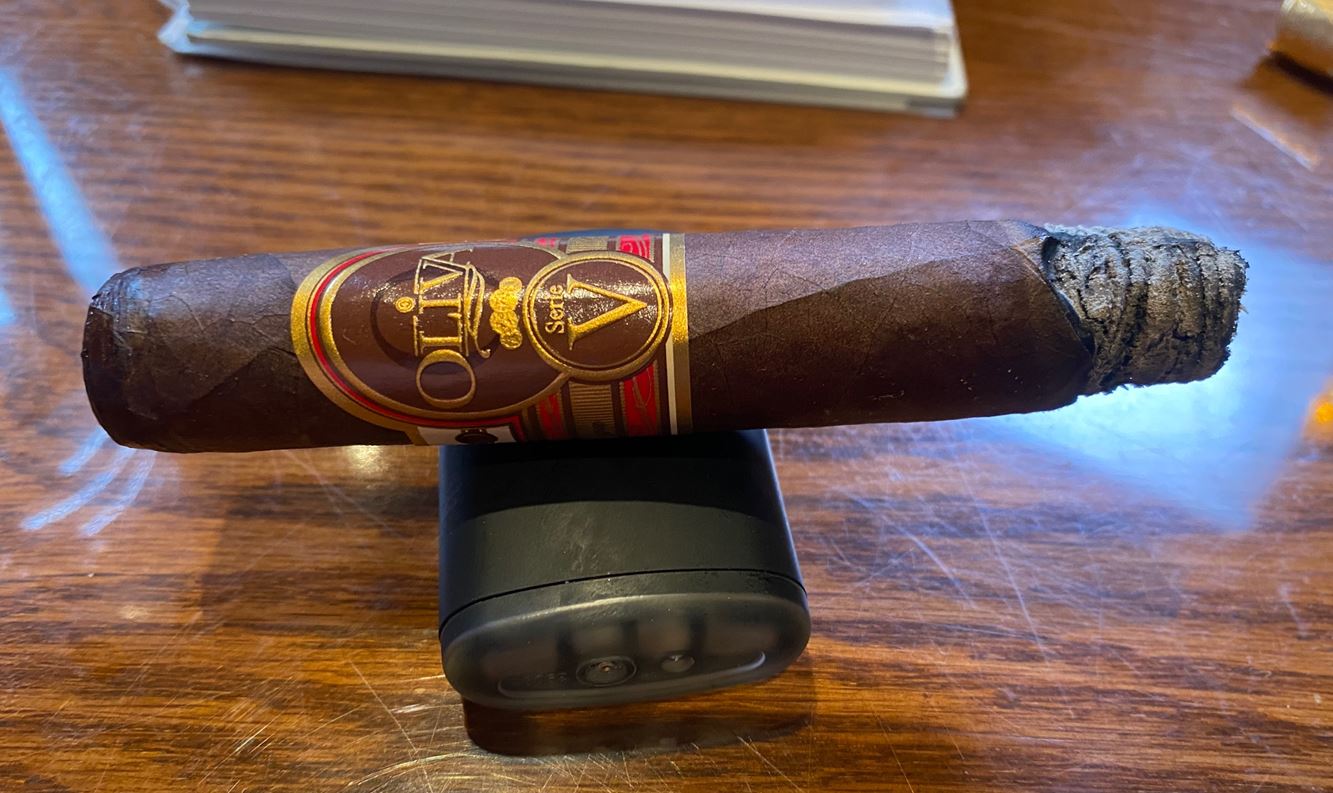 First, I was surprised that this cigar had a great draw. This was an initial concern because some Perfectos tend to be hit or miss with regard to draw resistance. Both samples smoked easily and produced volumes of thick smoke. As for the flavors, let me say wow. The base flavors were red and black pepper, licorice, coffee, dark chocolate, and some creamy sweetness. As the cigar progresses from the smaller foot to its full diameter, these flavors grow in their depth and richness. I found the cigar to be complex, not in the sense of a rollercoaster of flavors, but more in their balance and development.

With this cigar, size matters in the end. And price matters too. If you enjoy the Oliva V, Oliva’s in general, or impeccably crafted, fuller bodied cigars you’d be hard-pressed to find a better cigar at the Oliva Serie V 135th Anniversary Edicion Limitada’s price point.

Construction: This figurado is seamlessly rolled to a Perfecto née Lancero-ish style foot that gives a glance impression of pencil. Although I have seen a similar many years ago, this one is entirely unique. The color of the wrapper is a dark milk chocolate through-and-through. The packing is well done and quite firm, while the triple seam cap is also seamlessly applied. The cigar also has a good feel in the hand.
Draw: Perfect. (I cut both of my samples with a twin blade guillotine.)
Pre-light flavor: Mostly leathery with a slight herbal essence.
Toasting & Light: The cigar lit well, and I recommend using a single flame torch for this one. The 1st few puffs were mostly earthy and lightly sweet with a dash of black pepper in the mix and on the long finish.
Base flavors: Earth, black pepper, brown sugar, espresso, nutmeg.
Retrohale: N/A
Aroma: Spicy.
Burn & Ash Quality: The burn was mostly even with a very fine carbon line. Early on, successive draws revealed a copious volume of smoke that remained throughout. The ash is a darkish gray and quite firm, especially in those early Lancero-width inches.

Summary: I’ll start here the way I did in the video: This was one of the smoothest smoking cigars I’ve had from Oliva. And although it was bold and full-bodied at times, it never shifted into heady territory. It was also quite nubbable.

Due to its shape, the Oliva Serie V 135th starts out like a Lancero. (If you get the chance, check out the Oliva Serie V Lancero, too.) For me, the early flavors were mostly earthy with a light brown sugar taste and black pepper on a long finish. The spice rounds out fairly quickly, too. 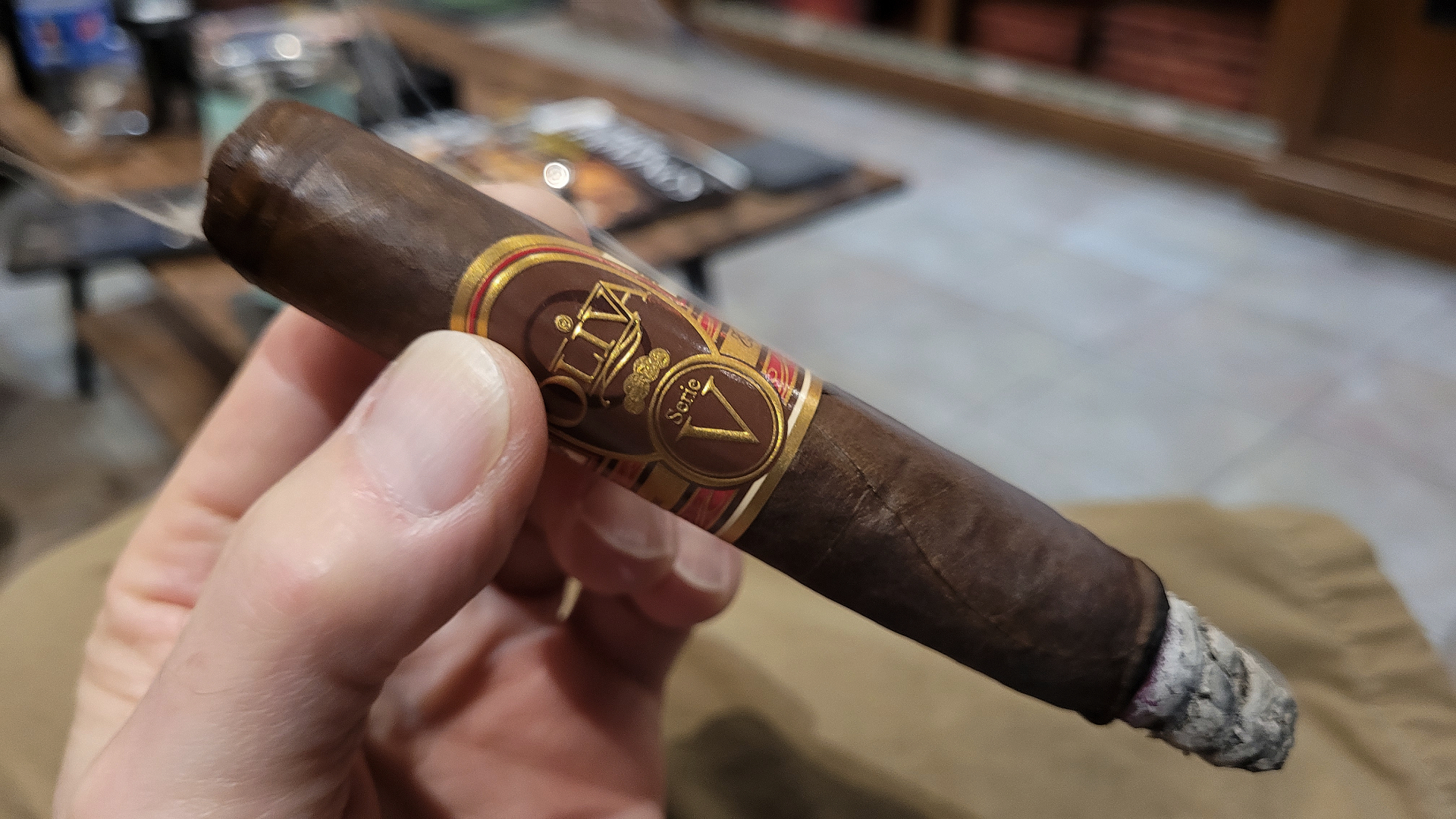 Once you get past the narrow section the cigar evolves into a big, well-rounded 54-ring Toro. Here’s where flavors of espresso and brown sugar enter the fray. The cigar also continues to put out a chimney-full of smoke. In the closing moments of the midsection the brown sugar gets a little buried but returns in the final third of the cigar with an added note of nutmeg. The body is now steadfastly full, but never becomes overpowering.

Pairing-wise, the Oliva Serie V 135th Anniversary is nice with coffee, but like many refined cigars in its class, I think a lightly sweet rum or bourbon would be in order for a long night cap. If you’re already an Oliva Serie V smoker, this cigar is a must. (I’m also pretty certain it will become a collector’s item.) That goes for all of the other Oliva disciples and fans of luxury class Nicaraguans. The way the cigar’s flavor profile developed, not to mention its performance and price, I can definitely get behind it.

Reading Time: 4 minutes It’s almost like getting two cigars for the price one: watch as Gary leans in on how the twin Ecuador Connecticut and Mexican San Andrés maduro wrappers affect this Nicaraguan core blend, and yet also comes at a very affordable price. . .