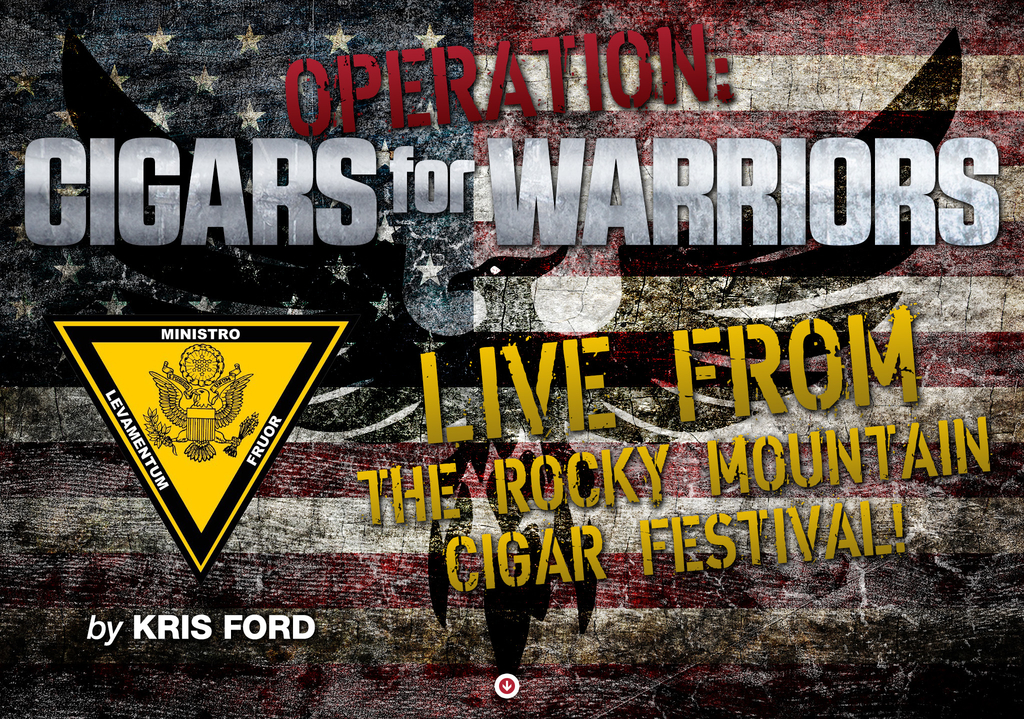 As a one of the Colorado area Event Coordinators for Op: Cigars For Warriors, the weekend of The Rocky Mountain Cigar Fest weekend was beyond my expectations in not only the size, pace and excitement of the festival, but the pre-parties, get togethers and generosity!  For this casual, cigar aficionado wanna-be and volunteer for Cigars For Warriors, I had seen pictures and heard stories of the big events back east and retailer events like IPCPR, but they couldn’t help me prepare for the fun I was about to have.

The weekend started picking up Storm Boen, Chairman of the Board for Cigars For Warriors, and bringing him back to Colorado for his second trip to the Rocky Mountain Cigar Festival.  As things started rolling out on Thursday, I took Storm to the top producing donation site in my short list of cigar shops with a donation box, Smoker Friendly Store #201 in Cheyenne, WY (3761 E. Lincoln Way).

Don’t let this little shop on the east side of town fool you, they have a comfortable cigar lounge and a respectable walk-in humidor, where we found a full box of UF-13’s sitting on the shelf.  This shop and more importantly their gracious customers have donated over 2000 cigars in just over 6 months of being a donation site.  The area is full of active, reserve and retired military members who know someone, or have been that solider or airman deployed to God knows where and the benefit of a good cigar to maintain some sanity.  When you stop in say hi to Joni and be sure you grab an extra stick for the troops, or she will remind you.

From there we traveled to Longmont, CO and stopped by CHUBurger (1225 Ken Pratt Blvd) for a pre-preparty bite to eat.  CHUBurger, is the third foundation based restaurant under the Oskar Blues banner, and was built to house the Bonewagon creation, the signature CHUBurger and has expanded to include the BERK Burger, GONZO Berger, OMEGA3 Burger, the BUFF Burger and so much more!  Let’s not forget it is family of Oskar Blues, so the entire line of Oskar Blues beer is on tap and readily available, if not highly suggested by many in the area.  The brewery was recently visited by Thor and Lisa Nielson of Cigar Press.  Two of their “guides” were none other than Joe Liggett (Smoker Friendly) and Thomas Bliss (Havana Manor- Longmont).  If you are in need of a good burger & beer in a short amount of time, you can’t go wrong visiting CHUBurger!

With our taste buds satisfied and our bellies full, it was time to head across the street to Havana Manor (1240 Ken Pratt Blvd), Longmont’s premier cigar lounge and host for the Drew Estate event.  We arrived to a large display table of Drew Estate cigars.  Ligas, Naturals, Under Crowns and more were packed on this table and up for grabs in preparation for Jonathan Drew.  We set up shop for Cigars For Warriors off to the side and had the blessed opportunity of hanging out with “El Capitan” Thomas Bliss, “Dirty” Fabian, and of course El Presidente Michael Landau.

The event was needless to say a great time.  Not only did the shop regulars come out and support one of their favorite manufactures, but many from all around came in to get some face time with one of the industry’s most approachable, giving and personable figures: Jonathan Drew.  Not only was Jonathan there, but we had several Cigar Rights of America there including Larry Magana, Patrick Carr and Glenn Loope. Added to that several other industry icons came by to enjoy the two excellent lounges Havana Manor has to offer.  I’m sure I am missing some but I had the pleasure of meeting Pete Johnson (Tatuaje), Janny Garcia (My Father), Eddie Ortega, Tony Gomez (LFC), Eric “Master Sensei” G. (Cigar Dojo), and Thor & Lisa Nielson (Cigar Press). Honestly, it was such a whirlwind and I was also focused on manning the CFW donation table, so I didn’t hang out too much.  Just enough to be humbled how little I know about cigars.

Friday morning rolled around and with last minute brainstorming, Storm and I headed off to Boulder for the Smoker Friendly Retail exhibit.  Drew Estates, in ongoing support of Cigars For Warriors provided us booth space to meet the store managers and owners who were wandering around looking for the next big item in their shop.  We had the pleasure of meeting and speaking with countless shop owners and managers who were interested in setting up CFW Donation boxes in their shops.  There were those who we referred to our website Cigars For Warriors and many more who gave us contact information so we could follow up with them after the show.  As it stands, we had almost 50 new shops interested in opening their doors to a donation box, which was not too shabby compared to the IPCPR.

After a successful trip to meet and greet store owners, it was time to rest up for the big event, or so we thought.  We returned to Havana Manor where there was a meet & greet scheduled with Pete Johnson and Janny Garcia.  This was more relaxed than the previous night’s event, but again there were all the big players hanging out together in “my B&M”!  There was time for talking with the various manufacturers, and hanging with friends.  Everyone was excited for Saturday to come and the opening of the gates to the 4th Annual Rocky Mountain Cigar Fest!

Saturday morning came with the mixed blessing of being entirely too early, yet not soon enough; especially after the adult beverages the night before.  However, the time had come.  I had been to every RMCF to date, but this year I was standing on the other side of the table.  Joe Liggett has made each year he has had it better than the year before and this one was no different.  Joe has taken the suggestions he received and done little things like changing the layout to improve the flow, increased the quality of the cigars in the goodie bags and generally improved the access to the facility based on your ticket level (General, VIP, Executive VIP).

So our day starts, setting up our booth at the south end of the beautiful grounds of the Millennium Harvest House.  We are at the south entrance to the event, not to mention right along the jogging path along Boulder Creek.  Mind you we are in “Boulder, CO” one of the first cities in the state to implement smoking restrictions, including recently banning smoking on the Pearl Street Mall (more about that later).  Needless to say there is a humorous irony of Colorado’s largest cigar gathering happening in the middle of this restrictive city.

Once the “doors” open 1,500 cigar lovers come in and start checking out the booths.  The support for the troops seemed to draw people in.  I can’t tell you how many people came up and either had friends or family in the service or they themselves served.  On two occasions we were blessed to meet individuals who served overseas and had received care packages from CFW.  It was great to see how much people stopped by to check out our booth and donate both cigars and cash to the cause.

The biggest and most heartwarming surprise came when a beautiful woman came up to the booth.  She was talking with Storm and my wife when I joined the conversation.  She was telling us how much she loved Colorado and mentioned she wasn’t going to leave.  Being from this beautiful state, I am used to this response and have many friends who literally followed through with this impulse.  Before I knew it my wife had offered a place to stay to this stranger anytime she wants to visit.  Before I knew it this woman grabbed several CFW postcards and was helping out.  Little did I know this beautiful, passionate gracious woman was none other than Marielos Drew.  Before I knew it I was working with the wife of one of the most sought after figures in the cigar industry, and she was doing a GREAT job.

Despite the wild Colorado weather, everyone was having a great time.  We had gone through a touch of clouds, followed by a short, light rainstorm and finishing off with some hot sunshine.  But as the day wound to an end everyone was in good spirits.

One of the most beneficial things we had going for us was a Combat Humidor donated by Tim Morris.  We were selling raffle tickets at $5 each and for not seeing this type of humidor before, we sold over $700 worth of tickets.  Borris Levin did an outstanding job on the combat humidor, and there was a large level of interest generated in his humidors outside of the raffle item.  The winner was very excited to get such a quality piece.  Jonathan Drew was, in his usual giving self, gracious and signed it for the winner.

After the RMCF we went to the Lazy Dog Grill (1346 Pearl St) for the Drew Estates Herf.  As mentioned before this is in Boulder, and the Lazy Dog is in the middle of Pearl Street Mall, which has all smoking banned.  But we reserved the roof top of the Lazy Dog for our private party and smoked away!  This was despite the return of the crazy weather.  But the half hour of rain and wind did little to quash the spirits of the dedicated Drew Fans.  We spent hours chatting it up with Fabian, Jonathan, Marielos, Tom and Gloria Navarro, and the various folks of the Smoker Friendly family who put on the RMCF.  We continued to get donations throughout the evening and had a great time.

In the end it was  a successful weekend for Smoker Friendly, cigar smokers and most importantly: the troops.  We raised over $2100 to help with growing postage commitment of shipping cigars and almost 300 cigars that weekend.  But we are seeing cigar donations on the rise in the area as a result of the generosity of everyone attending the Rocky Mountain Cigar Festival.

Tubo Cigars or Not Tubo?