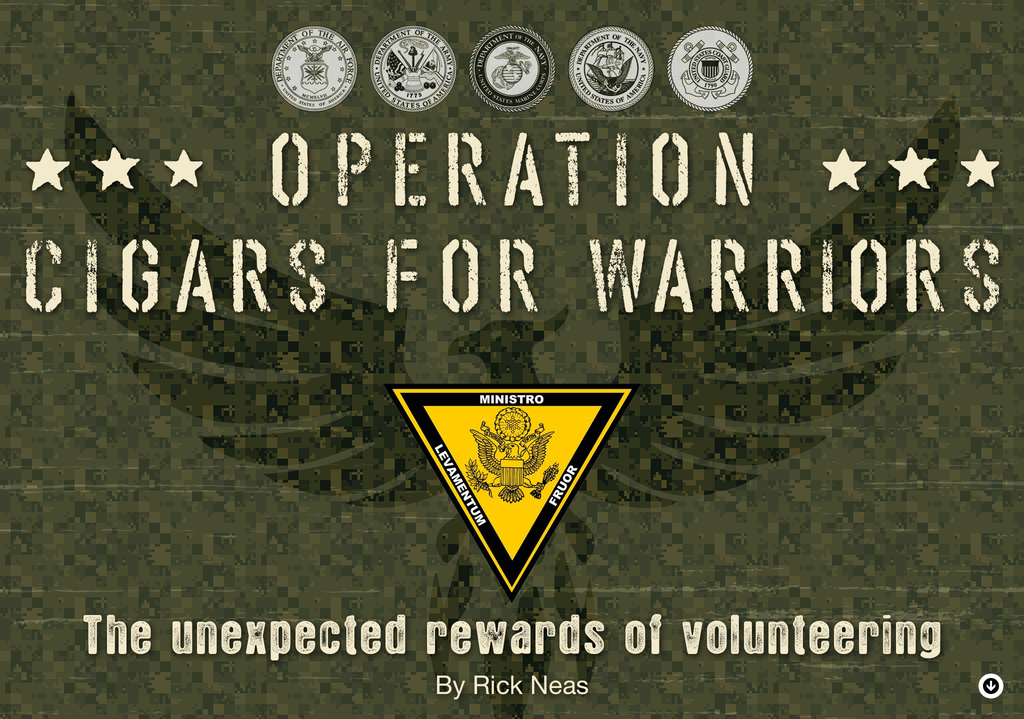 Operation: Cigars For Warriors -The Unexpected Rewards of Volunteering

The unexpected rewards of volunteering

It was the day that my cigar-smoking world changed.

I was at a cigar festival in eastern PA this past summer, and overheard a veteran talking to some guy with a beard, and thanking him repeatedly for the cigars he had received while deployed in Iraq, tearfully recalling how he believed the cigars saved his life. I thought, “Wow – this guy really likes his cigars.” But then I heard the rest of his story: the cigars provided a reason for the troops to sit down and chat, often discussing what they had seen and done – and gave them an opportunity to share the feelings that they all had.

Anyone that smokes cigars knows that one of the most endearing aspects of cigar smoking is the comradery; and I have met some of my best friends through cigar smoking. The man with the beard was Storm Boen, who I already knew from a Facebook cigar group called C.A.T.S. I never got the soldier’s name. But after hearing his story, I – along with my cousin Robert Neas – knew we needed to get involved. And since that first day, when I met other volunteers from Operation: Cigars for Warriors, I was hooked.

The next day, Robert and I were back at festival, and worked the Cigars for Warriors booth all day. The heartfelt thanks and stories of the veterans continued not only from those on active duty who had received Op: CFW’s care packages, but also from the older veterans that said they wished he had been around for them – and how much they would have loved to get such a show of support from home. Since then, Robert and I have officially become Cigars for Warriors event coordinators and attended several cigar events throughout the region. We also continue to be amazed at the generosity of the everyday people we see there, and the amount of cigars and cash donations that come in to our local cigar shops.

Robert and I have both found that volunteering with Cigars for Warriors has been rewarding in ways that we never imagined: Cigars for Warriors is a great group of men and women, many we now proudly call personal friends. And going to events and talking with shop owners and their patrons has yielded a great number of new relationships that we cherish. If it wasn’t for Op: CFW, we might not ever have even started a conversation with many of these people.

One of the best rewards for me is being able to represent Cigars for Warriors at large cigar events…and Robert and I enjoyed our first big event as Primary Event Coordinators with a thousand brothers and sisters of the leaf in Easton, PA. The staffs that work these bashes are always amazingly helpful, as they all bend over backwards to help support the cause.

Attendees at cigar expos are usually provided large bags that fill quickly with cigars and swag from each of the cigar manufacturers in attendance. At this particular event, we were lucky enough to set up our displays next to the Drew Estate booth – Jonathan is extremely supportive of our organization, and the fans that flock to meet him were able to talk with us and gain some insight into our organization’s role. We heard several more stories of gratitude being shared here by the recipients of care packages, just as before. The manufacturers (many of whom we now consider friends because of our working relationships) gave generous donations for a raffle to help raise the cash to cover the shipping costs of the cigars to the troops. As patrons listened to live music and feasted on amazing food, they eagerly sorted through their newly collected loot – and many gave cigars and swag into our collection boxes that had been setup around the tent area, in addition to a significant amount of accessories that were collected for the troops.

The warm reception and support from the patrons, veterans and event staff was so rewarding – I’ll tell you, you can’t imagine the feeling you get until you experience it. Something else that happened at this Cigar Expo that really moved me; almost every one of the speakers who addresses the crowd, all of whom were the principles of different cigar companies, got up and spoke about Op: CFW passionately. The passion that poured out of these men was so genuine and heartfelt, and it showed the support that the whole of the cigar industry has for our troops. It goes to show you that despite any personal political opinions, the troops are a top priority to them.

By the way – one place to put on your bucket list is Musikfest in Bethlehem, PA. Musikfest is “America’s Largest Free Concert” that lasts 11 days, and includes almost every genre of music. Since most of the venues are outdoor it’s a perfect opportunity to listen to music and smoke a cigar! As an added bonus, a local shop got into the spirit of the event by booking their own cigar vendors, bands and beer trucks filled with micro brews – and invited us to set up a stand for Cigars for Warriors.

Expecting 1 million visitors to attend the event, Robert wanted to do something extra special that would draw the crowds to our booth. So in advance of Musikfest, he took to converting his personal Jeep into an Event Coordinator vehicle by turning his rock climbing trail Jeep into an eye-catching, rolling advertisement for the cause. Kids loved the Jeep, and the attendees (many of whom didn’t smoke) were still very supportive. Mission accomplished! Although we struggled with some high temperatures and a few rainy days, we had a great time.

I also want to give a special shout to my cousin. Because I had used all my vacation time, Robert continued on without me the week after Musikfest to an event about 90 minutes north. Although it was the first year for this event, and it was a bit smaller than the others we’d been involved with – the organizers were extremely supportive of the cause, and the manufacturers and attendees generated an amazing amount of support for the troops. With the Jeep now drawing attention and the Cigars for Warriors’ charity growing every day, we are receiving so many requests for appearances that we’re having a hard time making all the events! Sure, we both have used our vacation time from work, paid expenses out of our own pockets, and even turned our vehicle into a rolling billboard for CFW – but Robert and I find the experience to be priceless, and highly recommend this charity for anyone who is looking to get involved in a great cause.

If you have a few extra cigars or dollars to donate I would urge you to drop them off at one of our local collection sites, which can be found at www.cigarsforwarriors.net. These cigars really do bring some much needed stress relief and joy to our deployed troops. Even better, if you’re seeking some of those unexpected rewards and the friendship and comradery of a great organization, while helping our men and women in uniform – consider becoming an event coordinator. In either case, I hope to see you at one of our upcoming events!

Read More
Cigar Makers
Ernesto Perez-Carrillo's La Gloria sparked the 90s Cigar Boom, and he continues innovating today under the flag of EPC Cigars. But what were the premium cigars that, over the years, influenced and inspired him - and played a key role in his success? Ernesto revealed the list to us, and his answers may surprise you...
Read More