The Oscar Valladares McFly Back Story

Do we need to explain McFly’s backstory for this cigar review? “Hello, anybody home?! Think, McFly!” If you really don’t know who Oscar’s referencing, you’re probably not old enough to smoke cigars and should stop reading. That said, the cigar is a visual blast of nostalgia, a time capsule from a trilogy that’s safe to say is among just about everyone’s favorites. We’re talking, of course, about Back to the Future and the misadventures-in-time of Marty McFly and Doc Brown. 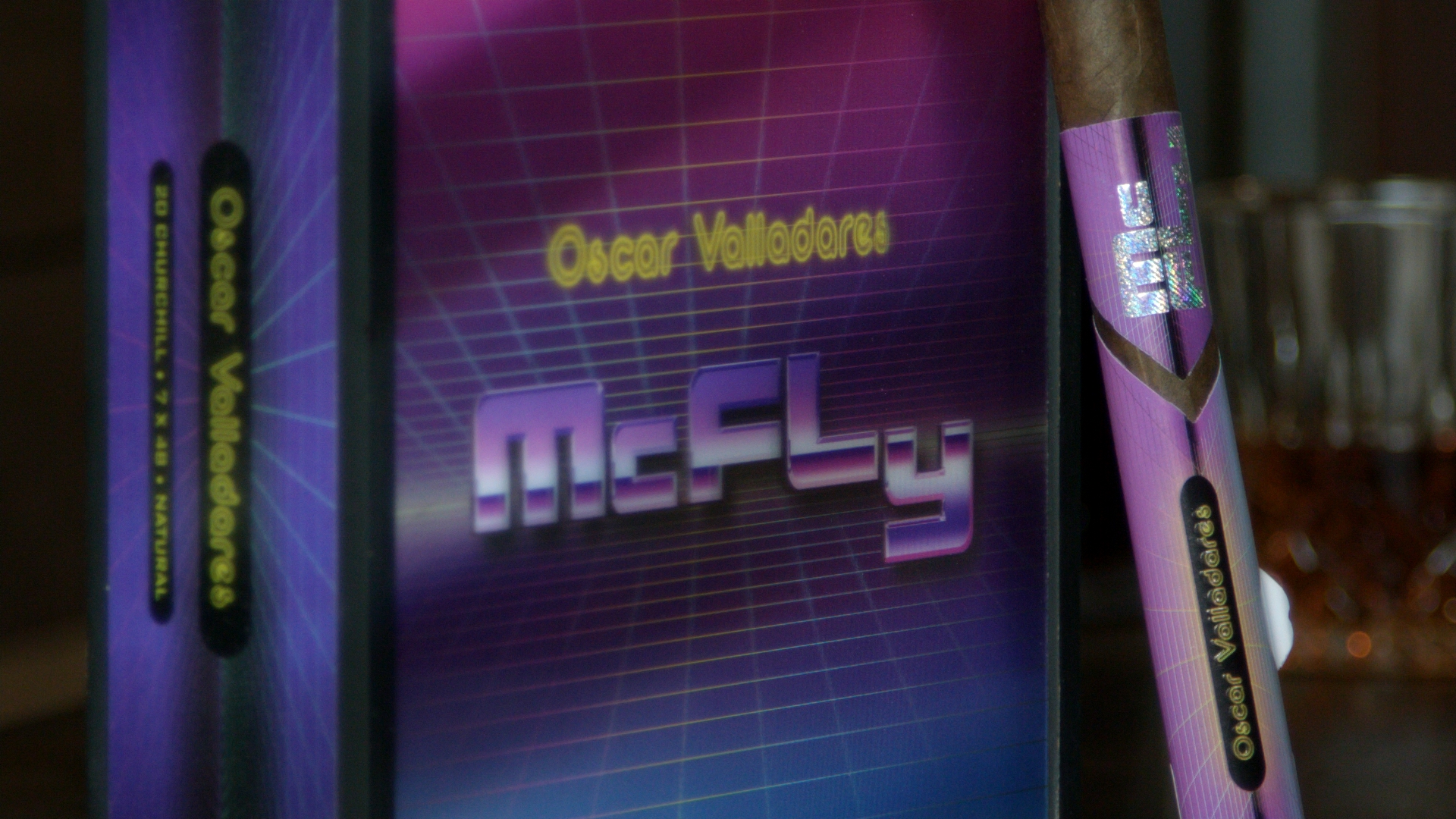 This isn’t Oscar Valladares’ first foray into movie-themed cigars. His Super Fly blend shares the name of the 1972 movie that inspired it and is still buzzing through the review junkets.

As for McFly, it’s got a band and box art rocking a neon grid that could be straight off of an 80s Trapper Keeper – our only question is, is its flavor just as awesome? Luckily, we don’t need a time machine to find out. Check out our panel review video on Oscar Valladares McFly and see if this cigar is worth it, or better left out of your future.

By the way…anyone know if this cigar can actually travel through time? 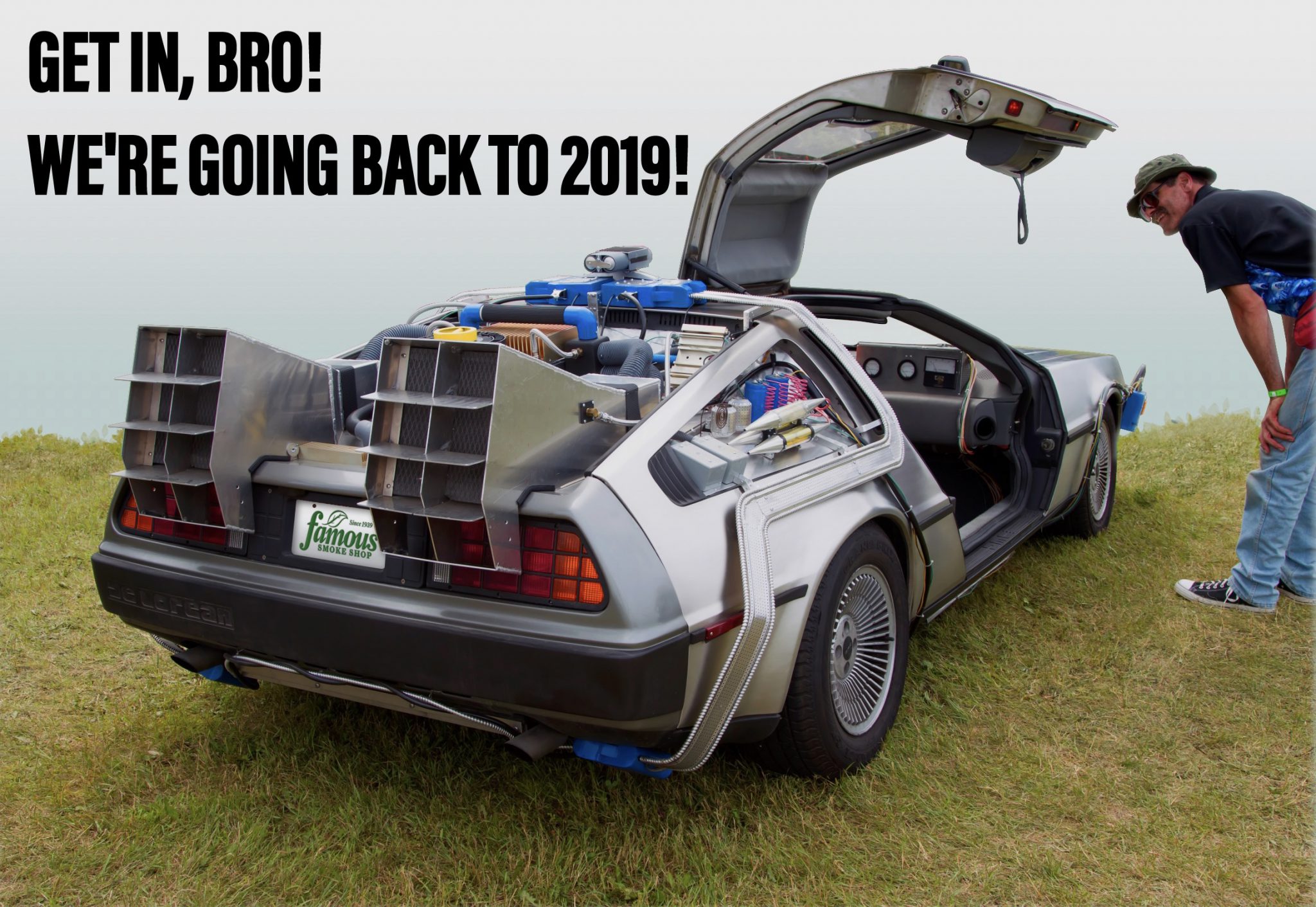 Construction: Seamlessly rolled. The attractive wrapper has a dry appearance with a flat milk chocolate color. It’s finished with a triple seam cap at the head and a brushed foot at its base. The cigar was also firm to the touch with no soft spots found along its length.
Draw: The head cut easily revealing a good, yet slightly firm draw.
Pre-light flavor: Salty and lightly spicy.
Toasting & Light: The cigar lit easily. The opening notes were mellow with a mix of salt and sweet tobacco. By the first inch the burn was performing well exposing a firm and mostly grey ash.
Base flavors: Light salt, nutmeg, sweet tobacco, cedar, cashew, white pepper, earth.
Retrohale: N/A
Aroma: Spicy.
Burn & Ash Quality: Excellent. The burn was even with a very thin carbon line, not too fast, and revealed a fairly firm, mostly grey ash.

Summary: Let’s start where the rubber met the road; or to put it another way, where the binder met the wrapper. Still slightly salty, the smoke yielded a white pepper-like spiciness, yet I was surprised that this cigar wasn’t spicier. My earlier experiences with San Andrés “natural” leaf tended to have more bite. Plus, this wrapper was more of a dark natural, rather than the more common tan color. Although light also played with the color, I got the impression that it had longer aging time which mellowed it down a notch. For that matter, the cigar was mostly medium in body throughout. 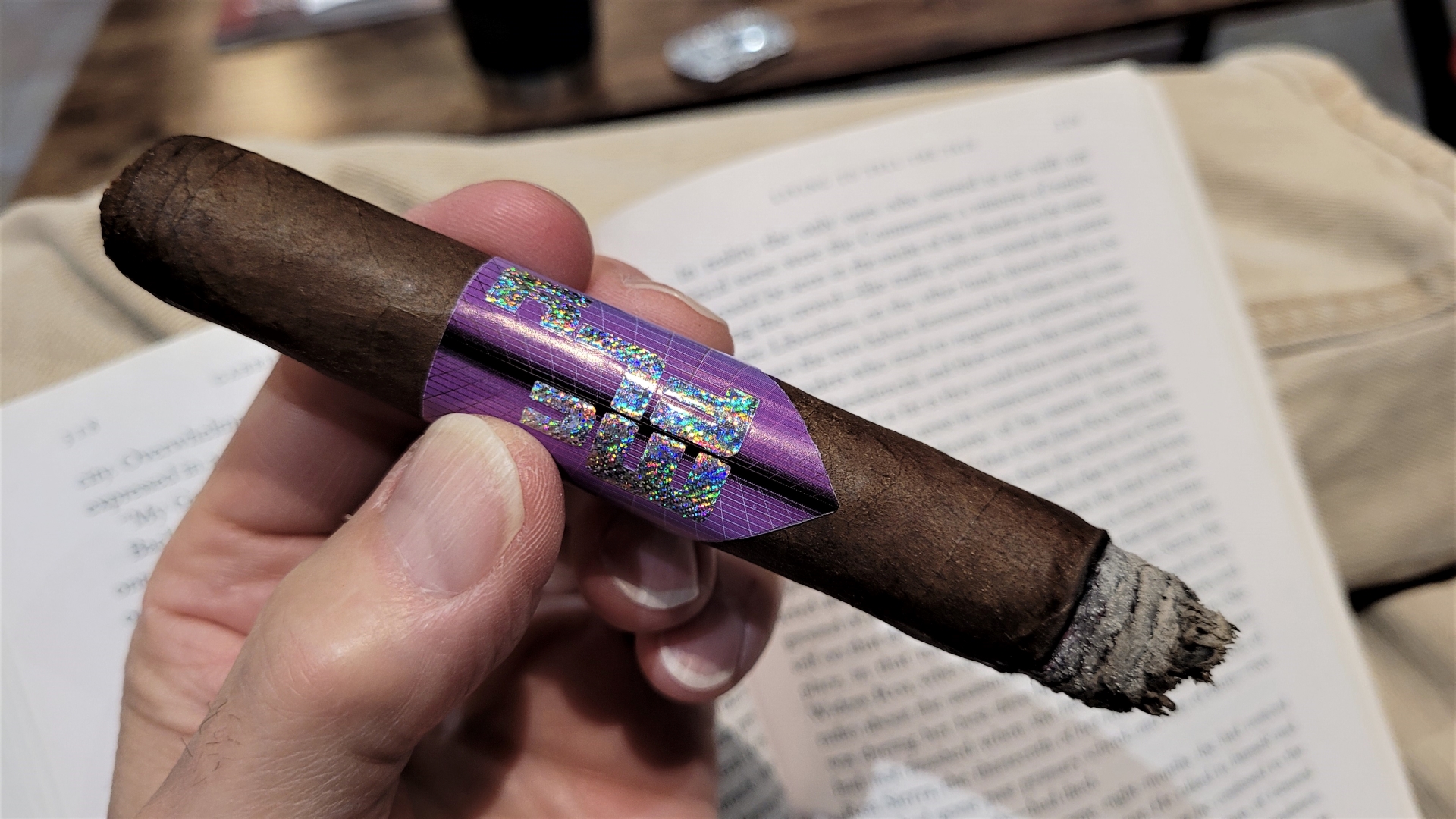 The flavors were well-balanced issuing well-defined notes of salt, nutmeg, sweet tobacco, cedar, white pepper and some interesting earthy tones. In fact, the further along this Churchill went, the better defined the flavors became. They didn’t arrive all at once, either. White pepper lingered longer on the finish in the midsection, while the initial salt, nutmeg, and sweet tobacco would eventually yield to the additional flavors one at a time. I felt this gave the cigar complexity, which led to an amiable chat on the subject between us in the video. Nonetheless, the salt and sweet tobacco, obscured by a heavier amount of earthiness in the final inches, never left the party.

What really impressed me was how the McFly Churchill kept all of the flavors lively and well-balanced during the entire session. I also agreed with Paul that it provided a very relaxing smoke. I think it would do well as a Sunday afternoon football cigar for its long smoke, medium body, and sweet-spicy flavor profile. Therefore, I have no problem recommending the McFly Churchill to cigar smokers of every experience. If you’ve ever had one of those moments when you’re browsing your humidor and can’t decide what cigar to smoke, if the McFly catches your eye, grab it.

Summary: I was predisposed to have a little fondness for McFly by Oscar before I even tried one. I love Back to the Future (about as much as Roadhouse) …and just look at the cool retro primary band! The binder and filler are exposed for about a ½ inch. And that’s what you get right off the bat flavor wise—the woodiness and peppery punch of the binder and long filler tobaccos.

There is a noticeable transition once the wrapper takes light, and this tames some of the kick while adding notes of sweetness, baking spices, and graham cracker. I perceived some mineral or saltiness on the finish. McFly is medium-bodied and builds to medium plus during the last third.

There was a little debate between us as to if McFly by Oscar was a complex cigar. I didn’t find it complex—flavor-bomb wise—but I found it enjoyable. This brings us full circle to Back to the Future (and Roadhouse).

To me, the movie Back to the Future is an American treasure. I’ll watch it anytime I come across it no matter where it is in the movie. It’s not Citizen Kane, and it doesn’t pretend—or need—to be. You get where I’m going here.

McFly is like a higher-end workman cigar–really good, a blast to smoke, and enjoyable at any experience level. Anything more, or less, would’ve done a disservice to the movie.

Summary: My McFly review begins with flavors that dance between woody and nutty. When the burn line reaches the wrapper past its exposed binder, an earthy sweetness emerges – perfectly in line with what you’d expect from Mexican, Honduran, and Nicaraguan tobaccos. 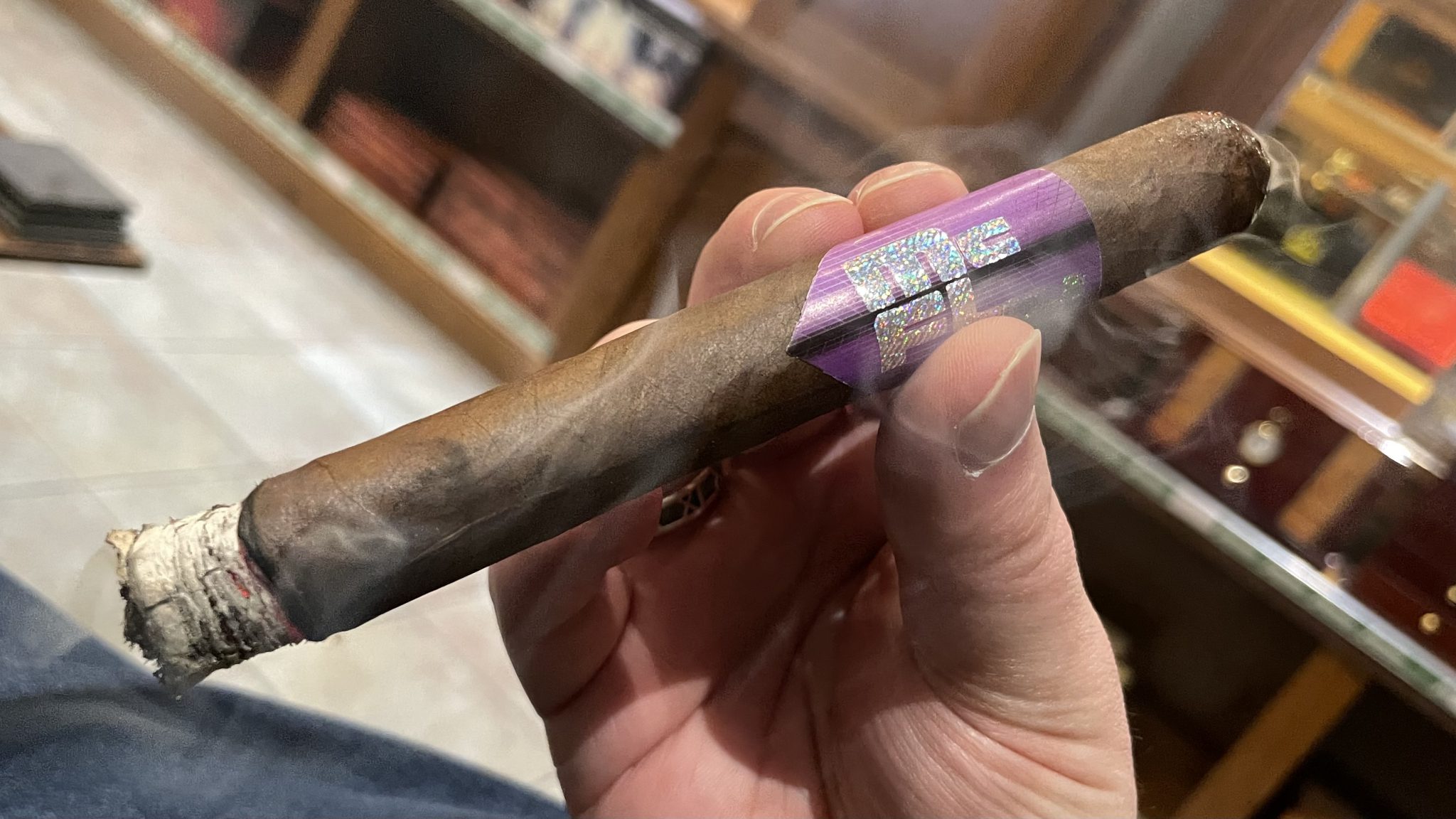 While the cigar has no correlation with the movies (if only it tasted like chicken) aside from theme of the packaging, it makes up for it via fond memories from my childhood…and gave me cause to revisit the trilogy over the holiday. Just don’t go in expecting 1.21 gigawatts. McFly is by no means a strong cigar. At its peak near the center, the blend reaches medium plus intensity with notes of buttered toast. Plus, a hint of nutty sweetness on the finish.

My McFly takeaway: it’s a pleasant cigar that never floors the accelerator. And in a cigar market that’s flush with full-bodied smokes trying to outdo one another, it’s refreshingly relaxed. Not overly complex, not too strong, and certainly not basic. Whether it makes it to 88 MPH – I leave that up to you!

Thanks guys, great review and love the difference of opinions! I’ll have to get a box and give these a try with my gamer smoking group and see how the comments are ;) Growing up as an 80’s teen really nails the vibe for me, good stuff and fond memories! These will debut after our next gaming session and I hope they go over well!