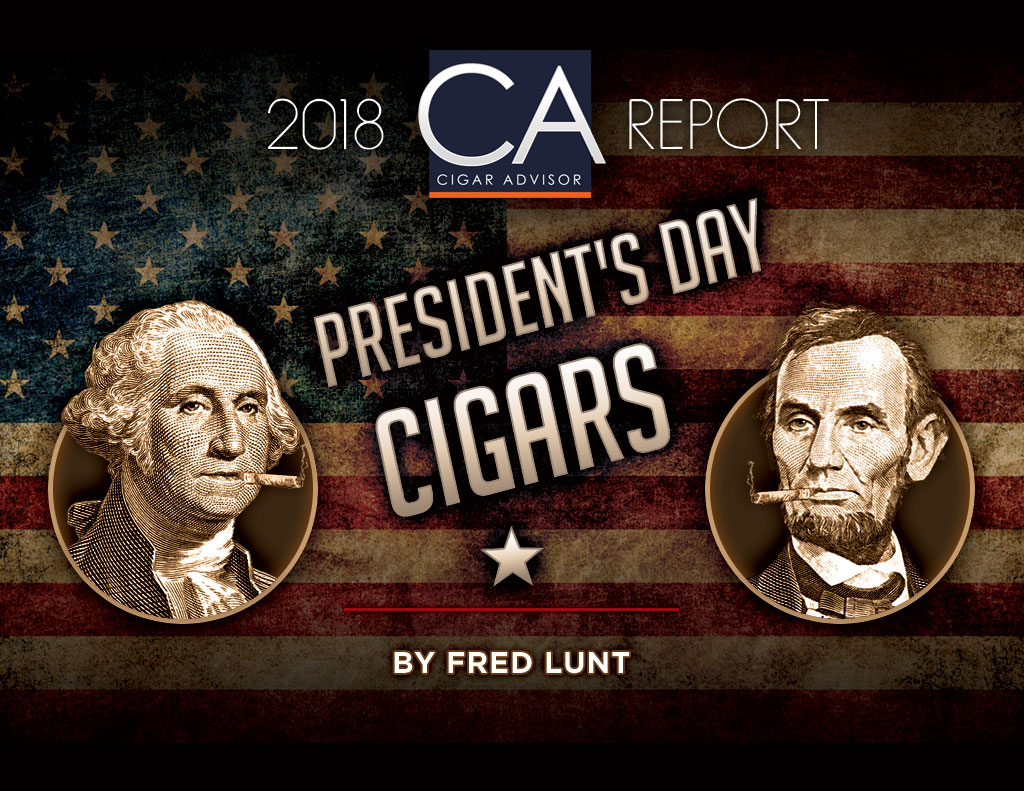 2018 CA Report: Inside the Oval Office – Presidents Who Smoked Cigars

Since 1879 Americans have been celebrating President’s Day. Originally set aside to celebrate President George Washington’s birthday,  the holiday now encompasses all Presidents – and this year, I’m giving President’s Day a different take by remembering the Presidents who smoked cigars – and who we can count among us as lovers of the leaf.

It’s no secret the Oval Office and cigars have had a centuries long love affair. In fact, between the Civil War and WWII, there were more Presidents who smoked cigars than not. Cigars truly were an important part of politics and were often given out by or to hopeful candidates. So, this President’s Day let’s look back at those lavish smoke-filled rooms that many of our former Presidents worked and politicked in.

Join us in celebrating some of our country’s greatest leaders by lighting up a hearty Presidente. As a bonus to our readers, I dug up a few images of election cigar boxes, a campaign trend that started shortly after the Civil War and is a fun niche in US history.

While Washington, like many other Virginians, grew tobacco- James Madison was the first known President who smoked cigars in the Oval Office. A Founding Father and America’s 4th President, Madison was known to smoke ‘seegars’ right up to the day he died at the ripe age of 85.

Jackson, or “Old Hickory,” was an honest-to-God Bad-Ass: politics aside, Jackson was a veteran of the Revolutionary War, a regular duelist, and often held large and rowdy parties in the White House. Jackson and his wife, Rachel, were so enthusiastic in their love of tobacco that they installed brass spittoons in the White House. It’s also been reported that Mrs. Jackson would smoke two cigars a night.

If there’s one BOTL President we can all relate to, it’s Zachary Taylor. Taylor, a war hero of the Mexican-American War, only smoked around fellow colleagues and friends as his wife complained the smell made her sick. If any President ever needed a man-cave, it was Taylor.

Grant is the posterchild of cigar smoking Presidents. While his story is long and complicated, he led the Union Army through a hard-fought war and came out victorious. It’s been said that while he dabbled in a little whiskey (or a lot) he was, by all means, a chewer of tobacco. After his, and the Union’s, first victory, he lit up a victory cigar. The “unconditional surrender” of Fort Donelson inspired a devoted Union citizen to reportedly send him 20,000 cigars. Through his life thereafter he was known for chewing and smoking roughly 10-20 cigars a day, and also employed the famous author and BOTL Mark Twain to write his memoirs.

Who? Chester Arthur is arguably one of the lesser known Presidents, but to be fair he has some stiff competition. Arthur was a wealthy New York lawyer, politician, and close ally of Grant. He found his way into the Oval Office by way of the assassination of his predecessor, James Garfield, and went on to lead a respectable and moderately successful term. In his spare time, it’s been said he had a penchant for throwing lavish midnight dinners and consummated these meals with expensive imported cigars and champagne.

25th President William McKinley was a cigar nut, rumored to smoke 18 cigars a day. Due to the stress of being a congressman, McKinley picked up the habit which quickly became his only respite for relaxation. During his political career McKinley was often found taking solitude in evening walks, pacing the streets of D.C. with a cigar. He was so fond of his imported Garcia cigars that he finagled a deal with Mrs. McKinley to smoke in all wings of the White House.

The man, the myth, and the legend; Theodore ‘Teddy’ Roosevelt was another certified bad-ass President whose list of accolades is too long to go into the full detail it deserves. As a child, Teddy was diagnosed with asthma, doctors recommended the young boy drink coffee and smoke cigars to combat his chronic ailment. While it may not have been the best idea, Teddy kept the cigar smoking habit into adulthood and was reported to have smoked at least one Cuban cigar a day.

While Harding was careful not to be seen in public with his beloved cigars, this POTUS was all over them in his spare time. Harding’s former Ohio home, now a museum, still contains his massive humidor (a gift from the Cuban people) and desk complete with cigar burns.

While his term was cut short by his untimely death, his legacy has been marred by revelations of several extramarital affairs and the Teapot Dome Scandal, further satirized on a cigar box: 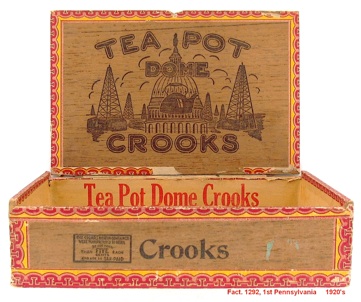 Coolidge, or Silent Cal, perfected the art of politicking with cigars. Coolidge smoked three a day of the finest Cubans he had, the bigger the better, of course. Aside from smoking them, Coolidge used cigars as props- excitedly talking through them or angrily biting into them while working with members of Congress. While holding breakfast meetings, Congressmen in attendance would be given a cigar and you know damn well each one was smoked whether they wanted to or not.

No not the vacuum guy! While Hoover was known as a tough Depression-Era President, his cigar smoking habits began during his tenure as the head of the US Food Administration. Hoover’s job was to keep our Army and Navy’s food reserves up to snuff while the nation was at war, which led to frequent dealing with the Cuban government, one of the largest suppliers of cane sugar at the time. According to the Herbert Hoover Library and Museum “Hoover gave more time and attention to procuring a consistent supply of Cuban cigars for his personal use than to matters of state.” According to the several folders in the Commerce Papers, Hoover ordered cigars “by the hundreds” and paid particular attention to the “lightness of the wrapper and mildness of the smoke.”

We like Ike, and Ike liked cigars. That’s right, the WWII 5-star General and 34th President loved him some smooth cigars. During his two-term presidency, Eisenhower held many state and private dinners at the White House. Typically, the evening would conclude with the men retiring to the Green Room for after-dinner drinks and cigars while the women, led by the First Lady, went to the Red Room for coffee and cigarettes.

JFK is probably the standout among Presidents who smoked cigars…and certainly worth remembering is the infamous tale of his final grab of Cuban cigars the eve of signing the embargo, a story that has lived on for decades. In a nut shell, the night before Kennedy signed the notorious Cuban Embargo in 1962, he ordered his Press Secretary to acquire as many Cuban H. Upmann Petit Coronas as possible – and succeeded in getting an estimated 1,200 cigars. While Kennedy may have smoked Cubans, I have no doubt he would enjoy the sweet and heavy flavors of the modern H. Upmann and given his pop-culture persona, the Mogul seems a good match to me, in a corona of course.

Nixon’s presidential career ended on a sour note; however his administration proved to be the ‘last stand’ if you will of cigars in the White House. Nixon was the last President to offer guests cigars in the Green Room. The official cigar of the Nixon Administration was Joya de Nicaragua, though the branding was short-lived after the Sandinista’s overthrew the government and confiscated the factory. The Antaño 1970 is said to emulate the very cigar Nixon would have handed out, so give it a shot.

Well, we all know old Bill would make the list or Presidents who smoked cigars. While I’m not going to delve into the details of that incident – yes, we all know the one – Bill was a regular cigar smoker and was often photographed with unlit cigars in his mouth. Unfortunately, while his love of cigars was strong, anti-tobacco sentiments forced his hand on banning smoking inside the White House and removing the ashtrays. Bill’s cigar of choice? Well that cigar which may have been shared with a certain White House intern is rumored to be a Gurkha Grand Reserve. If you’re looking to sample a Gurkha, I recommend starting with a budget-friendly Templar and working your way up.

While President Trump is still only one year into his first term, Gurkha came to make one more Oval Office appearance last year with a special inauguration cigar. In a Presidente vitola, the Trump Presidente was made to be handed out amongst friends and colleagues during the inaugural festivities. Trump, however, does not smoke.

Post your favorite cigar smoking President in the comments below, enjoy your holiday and happy smokes!

Happy to to learn I am in good company as I learned that many of our US presidents enjoyed a good cigar. I find that a cigar is how I can relax and calm any anxiety that finds it’s way into my daily endeavors.

You forgot obama, he was a cigar smoker also.