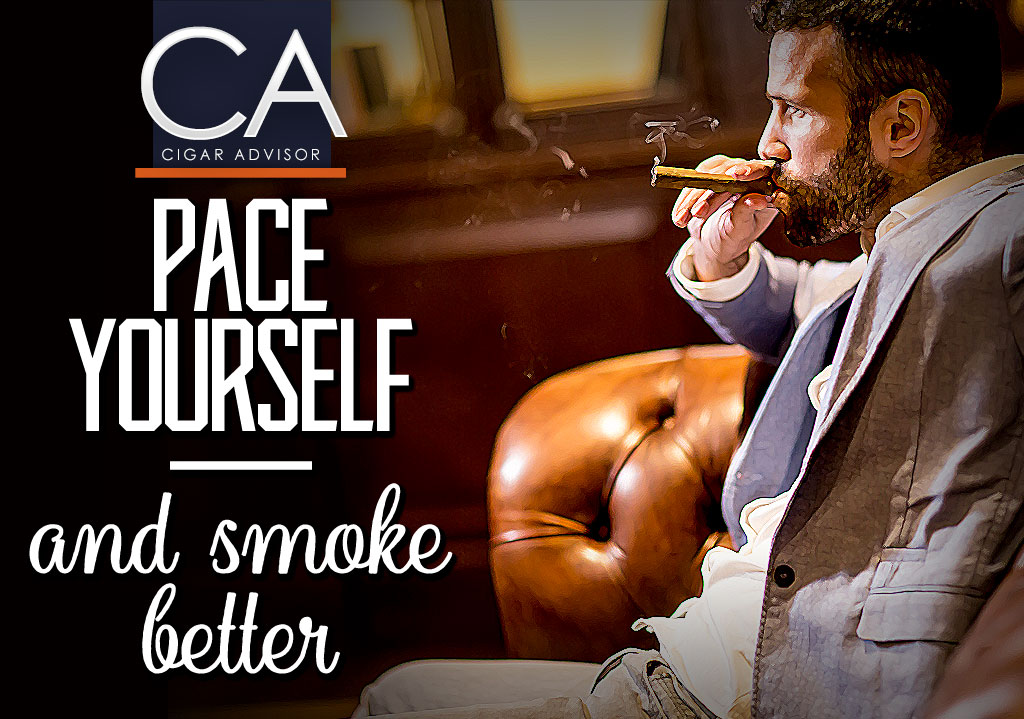 Pace Yourself: How Often to Puff a Cigar + 3 Cigar Smoking Tips

Cigar 101: Pace Yourself – How Often to Puff a Cigar

This one goes out to our new cigar smoking friends…being that it’s celebration season, you may get the opportunity to enjoy some great cigars – maybe even a few in one night. So what can you do to make sure you’ll enjoy them to their fullest potential?

Not long ago, we laid down a truth: “if you’re going to truly enjoy smoking a cigar, it’s worth your time to light it slowly, and light it properly.”

Turns out the same wisdom goes when actually smoking it, too.

I love smoking cigars as much as the next guy, and burn ‘em every chance I can get. I smoke cigars because they’re a relaxing way to spend some solid “me” time, in addition to being my line of work (blessed, yes). But pacing myself has paid unexpected dividends when it comes to truly enjoying them: just as I don’t gulp scotch, I don’t rush my cigar; so I recommend you take your time and savor it. I bet you’ll find that many cigars you thought were “meh” and don’t live up to the hype, actually take on a whole new flavor-rich life of their own. Don’t believe me? Try this for yourself…

There are two ways that tearing through a premium cigar is doing you and your palate more harm than good…first, it’s about smoking time. Maybe you find that you can blast your way through a robusto in under 30 minutes; or worse, many of your most-recently smoked cigars have had a bitter taste. Either could be a sign that you’re puffing too hard, too fast. If that’s happening to you, slow down. When considering how often to puff a cigar, a good rule of thumb is to be patient and hit on the cigar roughly once a minute or so. It lets the cigar burn a little cooler, and allows for your senses to pick up the flavors and aromas the cigar maker blended. Bonus: taking fewer puffs can also help make full-bodied cigars that much more manageable.

Smoking a cigar too fast can prematurely char the filler tobacco, and cause an ashy or bitter taste. And when you make it down to the nub in a more reasonable amount of time, the heat won’t ruin your smoke – or your taste buds.

In addition to being mindful about how often to puff a cigar, try rotating your cigar as you smoke it, too; smoking with the same side always up can cause an uneven burn. By rotating your smoke, the heat is more evenly distributed throughout the surface area of the cigar – creating a better burn, and a noticeable improvement in flavor.

I’ll admit it: in a past life, I devoured more than my fair share of Marlboros – I was lighting one off the other. And when I started smoking cigars, that not-so-savory trait followed me. While there’s nothing wrong with smoking more than one cigar at a sitting, it’s worth it to give your palate a break – so be just as mindful about how quickly you’re ready to light your next smoke, as you are about how often to puff a cigar. Another good rule of thumb: like that old tale about swimming after eating (even though it’s been debunked), it applies here; it’s not a bad idea to wait at least 30 minutes before prepping for your next cigar. Take the time to order a drink. Cleanse your palate with something cool and fresh, like fruit or a light snack. Any of these will help keep you from burning out your taste buds. Because while that first cigar may taste great, firing up smoke number two without even as much as a breather can make that next cigar taste “off.”

Even the pros take a break between cigars. When testing new blends, it’s not uncommon or unreasonable for cigar makers to smoke cigars by the dozen, and more than one at a time. But even the blenders know the senses need a time-out – and will take a few minutes away between cigars to cleanse the palate with a drink, so their taste buds don’t go down in flames.

You wanted an unexpected benefit to smoking more slowly? Listen to your wallet. If you smoke 5 cigars in an afternoon at $5 a piece, that’s 25 clams on premium cigars up in smoke. Whoa it down – pace yourself, and try getting 90 minutes out of that Fuente Churchill. Now you’re down to 3 cigars in an afternoon – and you might actually taste them all. You’ll still get the most out of each smoke, but now you’re buying a box of cigar a little less frequently, saving some coin and consistently enjoying your daily cigars.

Choose the right sized cigar to get the job done. Short on time? Go for a smaller RG or shorter cigar rather than powering your way through a humi full of Serie V 6×60’s. Got an evening (and 4 fingers of whisky) to kill? Skip that tin of cigarillos and go big, but smoke slow – no one wins in a race to the nub.

So yes, pacing yourself while smoking a cigar makes a difference – a huge difference. You can have yourself a rich, robust and flavorful cigar experience, or a “meh” experience…and I think you certainly deserve the former. Instead of laying down a smokescreen the next time you light up, try to enjoy all of the flavors that cigar is meant to have. Relax – slow down. There will be more cigars to smoke and enjoy. I promise.

“Sip” your full bodied smokes to regulate the power.

That’s a good article, thanks for sharing

This is great advice, I’m a maniacal puffer and slowing down really helps improve flavor. I may have to resort to a timer!

Reading Time: 10 minutes Thinking about moving out of the Shade? Not so fast – we look back over 10 years of Connecticut cigars that provide plenty of punch, as this ‘new breed’ Connecticut cigar trend has given us picks that smoke with full flavor. See our list now!