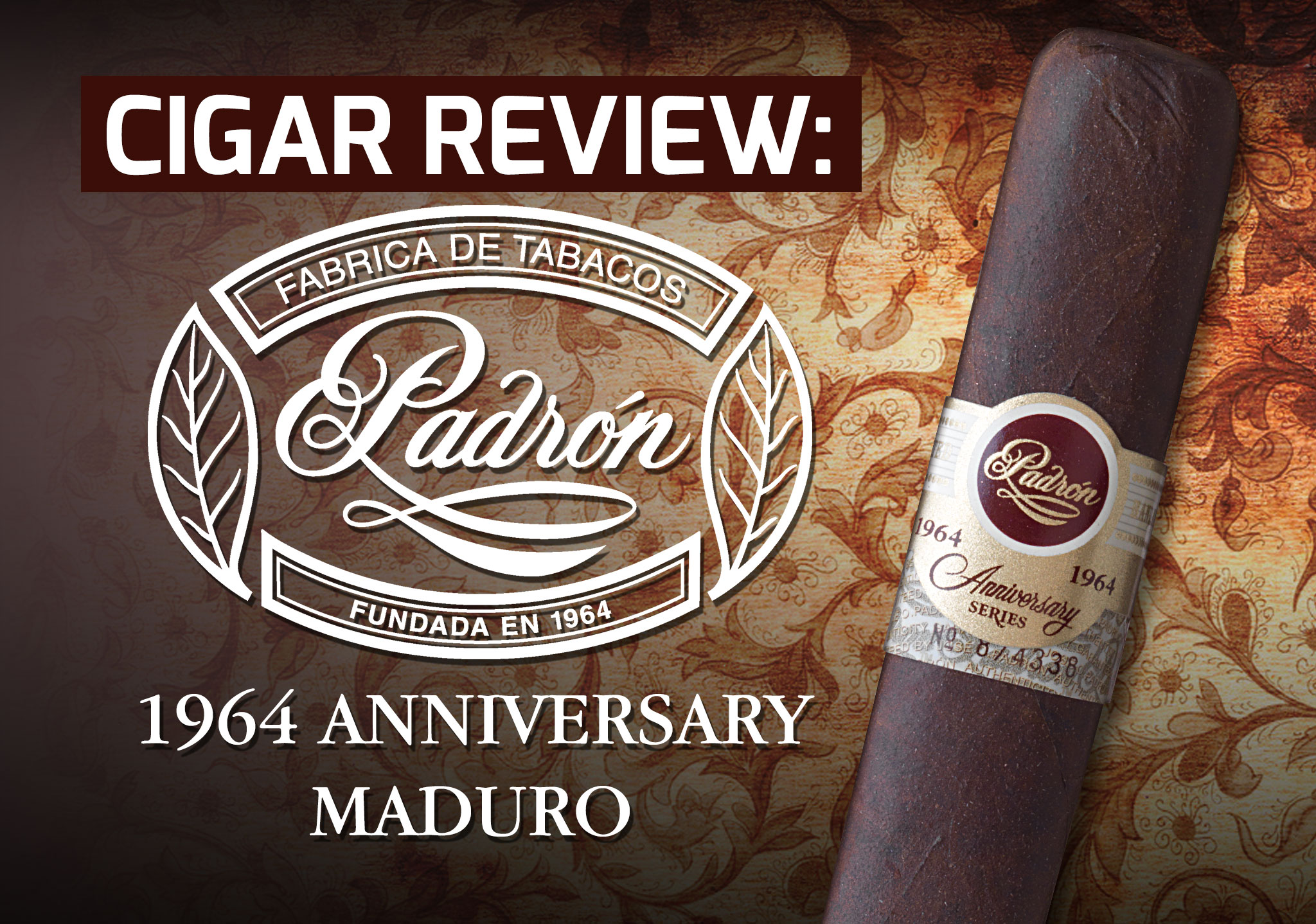 So I was forced to provide my Padron 1964 Anniversary Maduro cigar review, which of course meant smoking this terrific cigar counted as part of my daily “work”. Oh the sacrifices I make in the name of entertaining cigar content.

When we think of the top three cigars we have ever smoked, everyone’s list should include the Padron 1964 Anniversary Maduro. There is very good reason for this too, as these have been some of the most consistently highly rated cigars ever produced. Each cigar uses a minimum of 4 year aged tobaccos before it is rolled using only sun-grown natural wrappers (as opposed to shade grown) which gives a lot more flavor to the overall bouquet of the smoke, or a rich maduro wrapper. Both options are made in a box-pressed shape. I personally prefer the maduro to get more of that sweet, rich flavor, and luckily for me, that was the blend selected for this cigar review.

The appearance of the cigar is amazing. Perfectly wrapped, no protruding veins, oily, with a great box-press. I actually prefer box-pressed cigars for the mouth feel. I smoked the Exclusivo size which is a 5 ½ x 50.

The burn on the 1964 is straight as you could ever hope for which is a testament to how well it was constructed as well as the quality of the tobacco used. Usually if you have lower quality tobacco, there are spots in the wrapper that may be thicker (veiny) in some areas than in others, causing an uneven burn. Another point about the burn I find to be important is the heat. It’s a very cool burn which means you get more flavor rather than singed tobacco. Many cigars will burn hotter than this baby which can take away from some of the flavor.

The draw is also spot on. It’s easy with a slight resistance. I was pretty stupid though and used a v-cut. Word to the wise, on box-pressed cigars, try to use a punch cutter as to not damage the cap. I got lucky and everything stayed intact which can be attributed to the awe inspiring construction.

The aroma of a cigar is a very important factor when reviewing a cigar. It’s all part of the overall enjoyment and sensory appeal to a cigar which is why I feel it is important to mention my thoughts on it. By simply capturing the smoke pouring off of the ember, I am taken to a campfire of burning cedar logs which is just incredible. It’s a mix of that smell that hits you when you open up your humidor, blended with that burnt-wood, smoky aroma. It’s sweet, somewhat dry, and infinitely enjoyable.

I feel as though I should say “It’s the 1964. Need I say more?” But for those of you who have not smoked one of these beauties, let’s dive in to what I taste. When I think of a maduro cigar, I think back to one of the first

cigars I ever smoked which was a full-bodied bomb. Needless to say, I was traumatized into not smoking maduros for about a solid year. But then I met this cigar and was blown away. Maduros typically have a spicy sweetness to them which is wildly popular. However, because of the aging of the tobacco in the 1964, that spicy flavor you might have gotten is greatly reduced into a rich tobacco taste, yet the sweetness remains almost wholly intact. As you progress through the cigar, the rich tobacco taste remains a constant but new flavors will appear such as cedar, coffee, and a nutty, creamy, cashew. Most of these flavors will start presenting themselves on the aftertaste rather than with your draw which will be comprised mostly of rich tobacco. I feel as though the cocoa is a constant for me though which gives it that sweetness I was talking about.

None. That’s like saying you put ketchup on filet mignon. This cigar is so good, you should seriously consider not pairing this with anything simply so you can experience the slight complexities of this cigar without interruption.

In the office bragging about how I’m smoking a 1964 and everyone else is smoking some inferior short filler. I’m such a considerate co-worker.

Thanks for reading my Padron 1964 Anniversary Maduro cigar review! If you’ve never smoked one, you need to consider trying at least one. For the price, you can’t get much better than this. It’s a medium-bodied, full-flavored cigar that you will smoke to the nub. I usually classify cigars into three categories: everyday cigars, lounge cigars, and collector cigars. This is certainly in the collector category for its amazing qualities and rarity. Though you may see these at cigar shops all over the place, they are in fact a limited quantity cigar. Plus, I wouldn’t recommend smoking them every day around the house because they lose that special aura through time and smoking too many over a short period of time. I also wouldn’t consider this a lounge cigar because even though you will undoubtedly impress everyone in the lounge because you’re smoking a 1964, the aroma of all the other cigars that are lit around you will get in the way of the cigars true aroma and taste which will draw your attention away from it. This cigar requires your full attention to really enjoy it. To learn more, check out Padron 1964 Anniversary Maduro cigars at Famous Smoke Shop, or visit Padron’s official site!

Nice closing comments…have a resting 1926 maduro that is a special purchase…will smoke at home on a very still night where the foot smoke can linger in my smoking area!

Great review Jonathan DeTore! Spot on with everything. My wife bought me the five stick gift set for our 37th anniversary (I am a blessed man!) and I smoked it while I read your review. I agreed with almost everything you said. The one exception was that I got no chocolate. Chalk that up to different pallets. The smoke bellowed and enveloped me in an awesome halo of pleasing aroma. I retro smoked some through my nose and it really opened up even more pleasing notes of cedar. All-in-all, I will certainly be stingy about how often I smoke these and enjoy only on special occasions. I may share one with my cigar smoking friend in Poland as a Christmas treat this year!

Thanks for the comment Stephen. Yes, the Padron 1964 Anniversary Maduro is truly a “classic” in every respect. Glad you enjoyed them that much.
G-~

Council on Ageing Wine: Storage for the Enthusiastic Collector