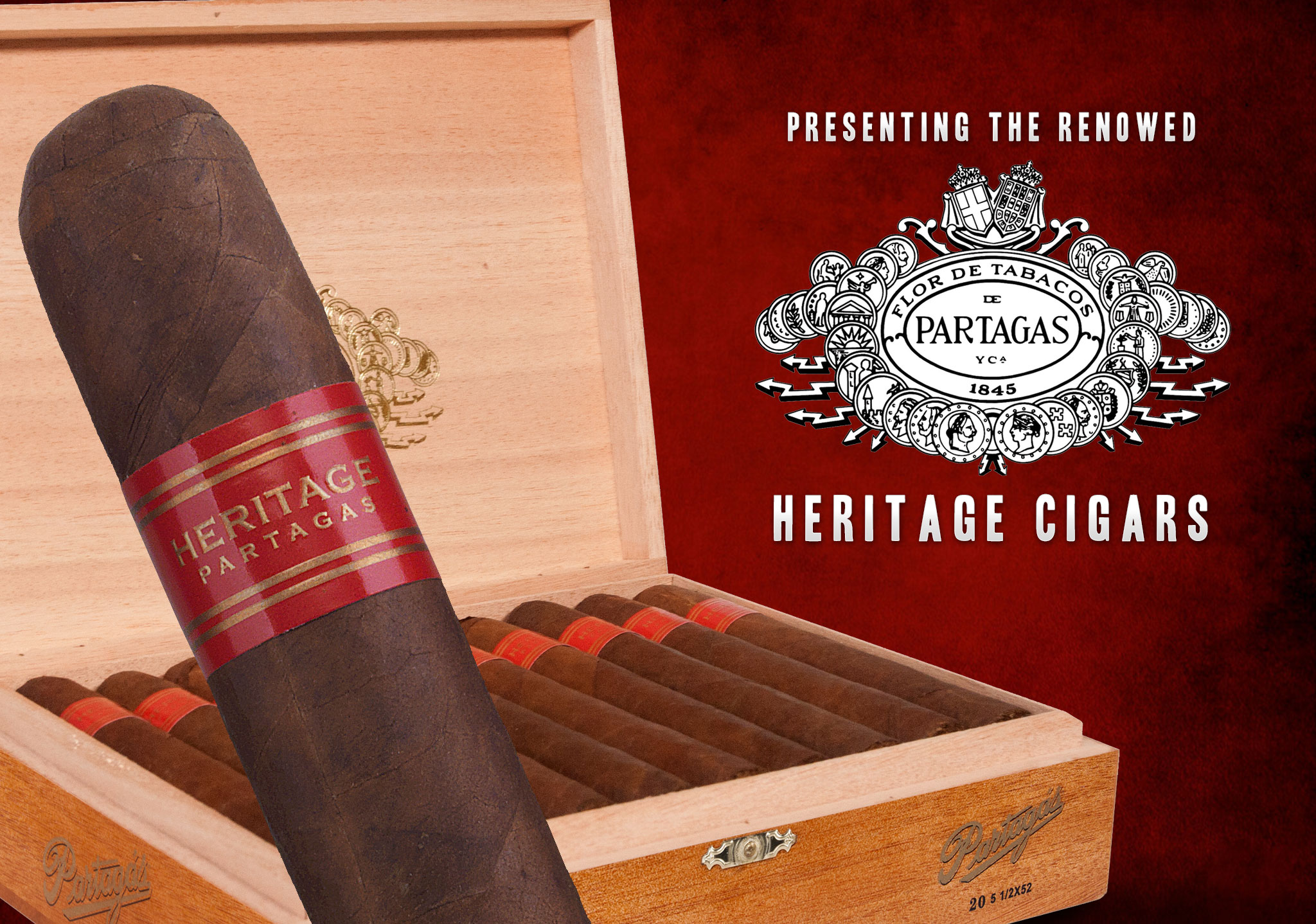 Partagas Heritage Cigars Pay Tribute to Over 170 Years of Excellence

Few premium cigars come with the kind of pedigree that belongs to Partagas Cigars. The brand first appeared in 1845 when Don Jaime Partagas y Ravelo built his factory in Havana, Cuba, and it didn’t take long before his Partagas cigars became the talk of the town. Don Jaime also had a slight advantage. Years before the first Partagas cigars rolled off the table, he bought-up the best tobacco farms in Cuba’s fertile Vuelta Abajo region. Following Jaime’s death in 1868, his son took over the business, and in 1900 he sold the Partagas factory to Cifuentes Fernandez y Cia. More than half a decade later, after the Cuban Revolution nationalized the tobacco industry, Partagas was among the top two best-selling cigars in the world. But rather than have the Cuban government tell him how to run his operation, Ramon Cifuentes decided to leave the island.

Enter the Partagas Heritage cigars that pay tribute to this esteemed brand with a new cigar that honors the more than 170 year legacy of Partagas in its blend, box and band.

“We set out to create a retrospective blend that celebrated the very best of Partagas to date, and took great pride in putting together the ingredients, just like coming up with a very special recipe,” said Jhonys Diaz, who led blend development. “This was a group effort, with our blenders in the Dominican Republic and Central America working with the marketing team to achieve the final taste.”

Jhonys and his team actually developed the blend more than ten years ago, but decided to save it for a special future release. Additionally, each of the tobaccos in the Partagas Heritage blend tell the story of the brand by echoing flavor attributes from some of the brand’s most popular releases, and a closer look at the blend reveals each savory chapter.

The wrapper chosen for Partagas Heritage is a proprietary leaf grown in the rich volcanic soil of Honduras’ Olancho San Agustin Valley and was developed exclusively for this release. Reminiscent of the wrapper used on the Partagas Spanish Rosado, it’s a mid-priming viso leaf with an attractive reddish hue and fine veins that imparts a touch of sweetness to the cigar’s flavor profile.

The binder is a Connecticut Broadleaf which adds another dimension of subtle sweetness with notes of cinnamon to the mix.

At the heart of the blend lies specially selected long-filler tobaccos that include Honduran Jamastran, plus the same Dominican Piloto Cubano and Mexican San Andres tobaccos that embody the Partagas 160.

The end result is a full-flavored and complex cigar brimming with notes of earth, cedar, sweet spice, leather, and a suggestion of white pepper on a long finish.

The cigars are presented in modestly elegant wooden boxes of 20 cigars that give a nod to previous releases of Partagas cigars, while the demure red and gold band is reminiscent of both the Dominican Partagas 150 and Cuban Partagas Serie D bands.

Veteran smokers of Partagas cigars will, no doubt, want to make the Partagas Heritage part of their collections, as well as cigar smokers seeking a rich-tasting, well-balanced cigar that pairs well with dark aged rums, long-aged single malt whiskeys, or fine Ports.

The 411 on the Partagas Heritage Collection

I can’t find any other way to reach you so I’m using this comment slot as a vehicle for a query.

My novel Blood Moon was inspired by a true crime of kidnapping, torture, extortion and murder here in Miami. It is a compelling story that I think would appeal to your readers, especially given the demographic of Cigar Avisor (primarily male, affluent, educated and probably “readers”).

What I’d like to suggest is running an excerpt from the novel in Cigar Adivor (Lifestyle section perhaps). I’ve attached the Amazon link to Blood Moon for you to take a look at. As you’ll see, it’s been well reviewed and you can find further literary critiques at Goodreads, for which I’ve also attached a link.

PS: I smoked a lot of cigars to get myself through the writing of Blood Moon.

A quick background bio…I spent 35 years as a speechwriter in Washington, DC working for members of Congress as a press secretary and speechwriter, and also served in the same capacity to the Secretaries of Commerce and Education during the Reagan and both Bush administrations.

Reading Time: 6 minutes The Perla del Mar series is a Cigar Advisor favorite for its ability to dish out big flavors for short money. Can their new Perla del Mar Corojo cigar addition keep the pace? That’s what we’re here to find out.

CA Report: Everything You Need to Know About Box Pressed Cigars