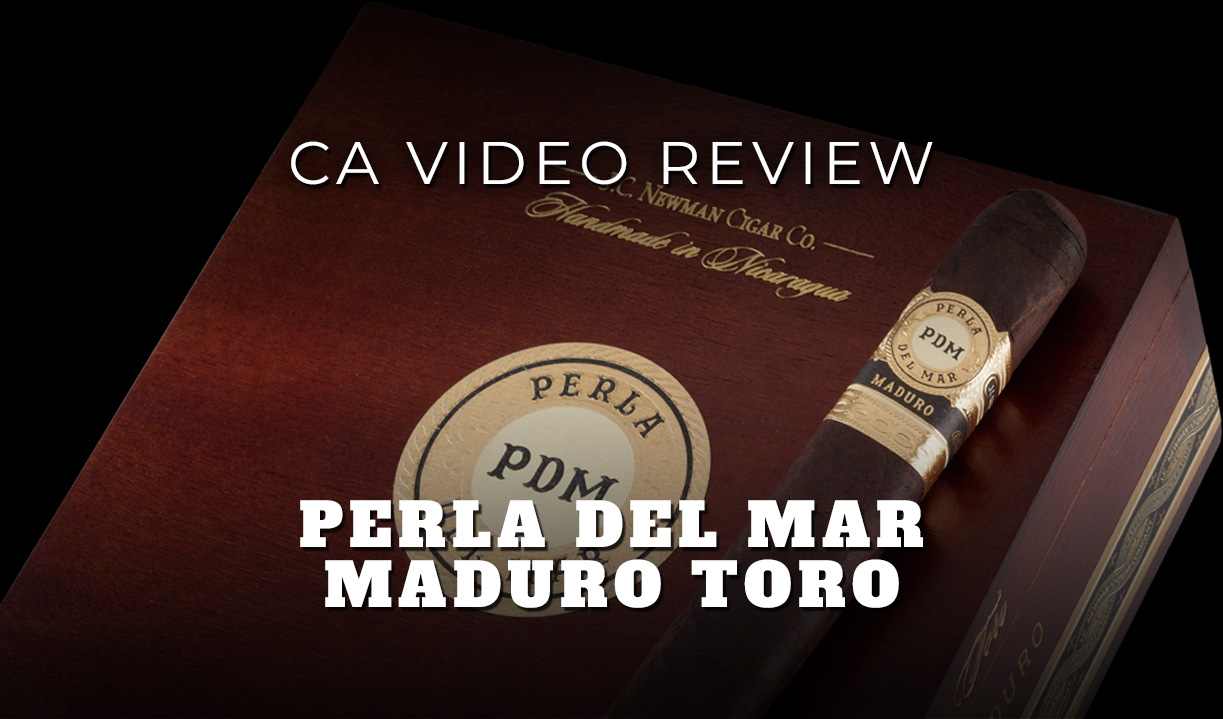 In 2020, J.C. Newman Cigar Company announced a major overhaul of its original Perla del Mar Maduro and Perla del Mar Connecticut Shade lines to honor the brand’s legacy. The makeover included an updated blend and packaging. It was also the year that J.C. Newman introduced the Perla del Mar Corojo which was reviewed by Cigar Advisor in April of 2020.

The Perla del Mar brand goes back to 1905 Cuba when four tobacco growing brothers began making their own cigars. They founded the company under the name Perfecto Garcia Brothers and branded the cigars Perla del Mar for Cuba’s beautiful Caribbean waters. During the early 1900s, Perla del Mar became popular enough that the brothers decided to build a new cigar factory right next to J.C. Newman’s El Reloj factory in Ybor City, Tampa. It wasn’t until 2012 that J.C. Newman introduced the brand to today’s generation of cigar smokers. 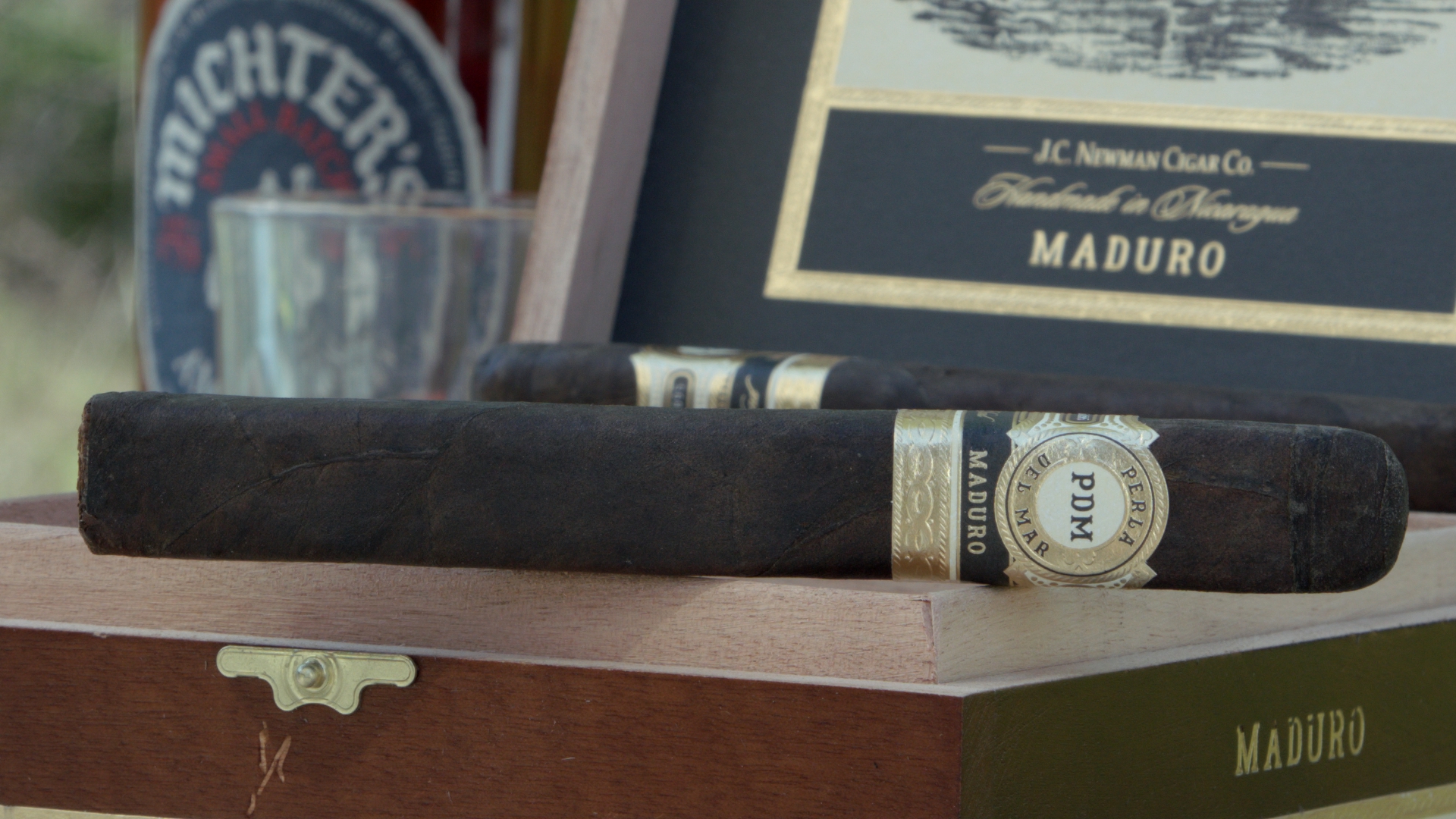 Speaking to why J.C. Newman decided to reintroduce new versions of the Perla del Mar Connecticut Shade and Maduro, general counsel Drew Newman said, “Although our Perla del Mar cigars were good, we were not totally satisfied. We wanted to make them better – and that’s exactly what we did. After two years of effort working to perfect the brand, we are thrilled to reintroduce Perla del Mar.”

The current selections are made with thoroughly aged Nicaraguan tobaccos from several regions. The cigars are box-pressed in what the Newmans call a “Tampa style” press, which results in a more rectangular shape. The company added that the Maduro line is both, “more aged than the original” and “a bit stronger” due to the use of heartier tobaccos.

Summary: I’ll start by saying that as I’ve been getting older, I find myself returning to cigars like the Perla del Mar Maduro with more frequency. And what I mean by ‘cigars like the…’ has nothing to do with who makes it or even how it specifically tastes. A big commonality is I find myself returning to cigars that are unpretentious and uncomplicated (don’t mistake this for meaning substandard in any regard. I put the Padron 2000 and Fuente 858 in this category). Put simply—the Perla del Mar Maduro is a cigar that I can smoke without feeling like I need a special occasion to enjoy it. 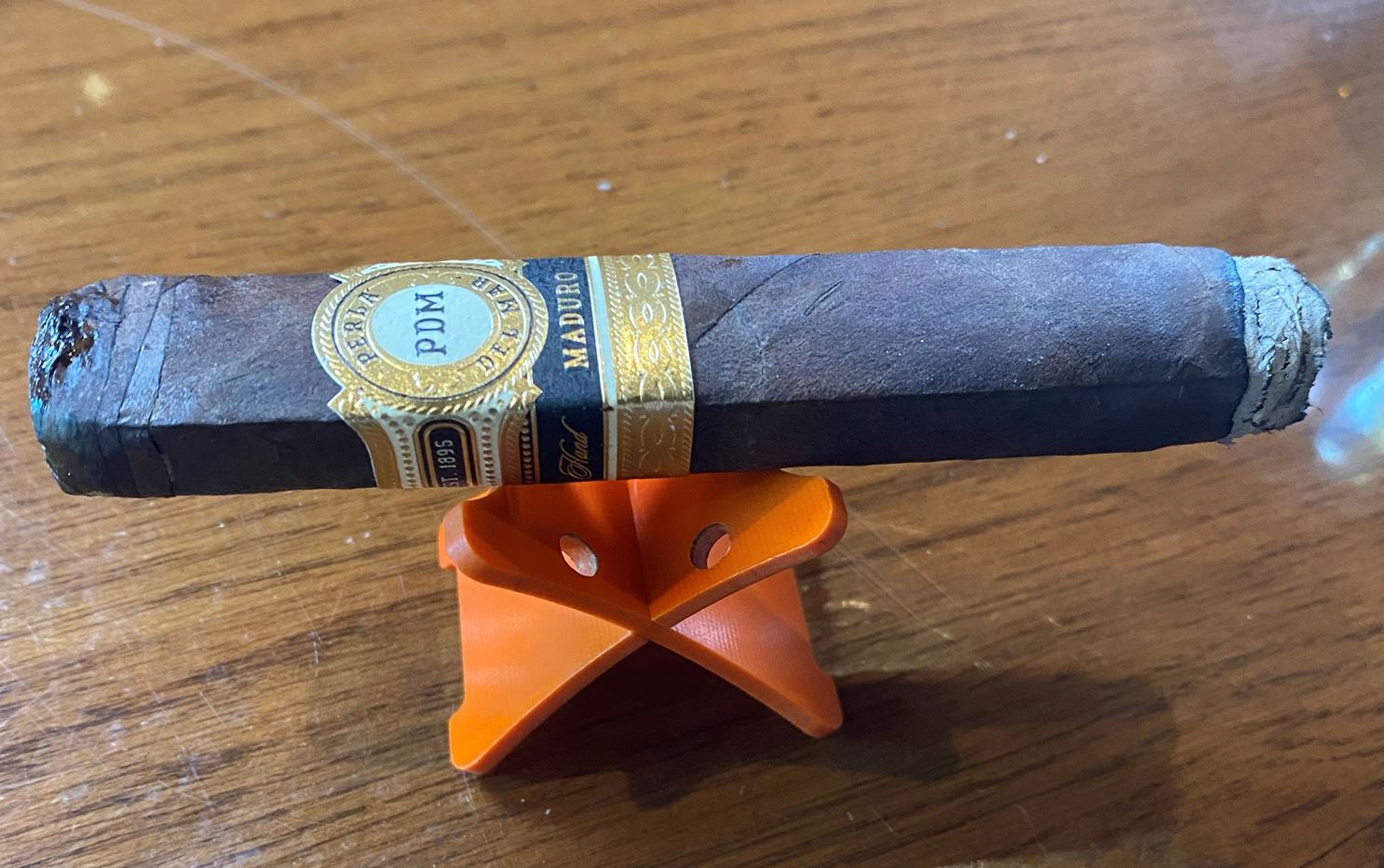 Flavor wise, there weren’t many surprises. It has everything you’d expect from a Nicaraguan-filled Connecticut Broadleaf Maduro cigar. I was surprised, however, by how well this blend performed with its even burn and ability to hold a long ash. In fact, in a few samples I had prior I was able to smoke the entire cigar in 3 ashes.

In the end, it boils down to who would enjoy the Perla del Mar Maduro. And as I stated during the review panel, this is a cigar for:

Finally, Perla del Mar Maduro is a cigar for guys who want a good cigar and understand a good value when they see it.

Construction: The chestnut brown broadleaf wrapper is not the oiliest out there, but it is plenty toothy. A little gritty in your teeth. Soft box press is evenly applied, barrel is a bit soft to the squeeze.
Draw: Zero resistance, which is a bit of a surprise for a box press cigar.
Pre-light flavor: Smell is fermented tobacco and that classic “barn” scent; taste is leathery and a little meaty.
Toasting & Light: Bittersweet dark chocolate, charred oak, with a peppery finish.
Base flavors: Earth, cherry sweetness, dark chocolate, coffee, pepper.
Retrohale: Exceptionally easygoing, with a nutty sensation like macadamias.
Aroma: Has a very pleasant woody smell, almost toasty.
Burn & Ash Quality: Burns a little uneven and a little quick, leaving a solid grey and flaky ash.

Summary: It takes a couple of rips for this big Toro to find its groove – once it does, the Perla del Mar Maduro offers a nice mix of earth and semisweet chocolate flavors, with a peppery finish. The profile sets its feet pretty early, occasionally adding a taste of coffee bean and a hint of tart-sweet cherry.

Even for a maduro, there’s not a lot of body to this cigar. Not a lot of strength, either: this is a pretty mellow-smoking Broadleaf, and the smoke is more silky than chewy. 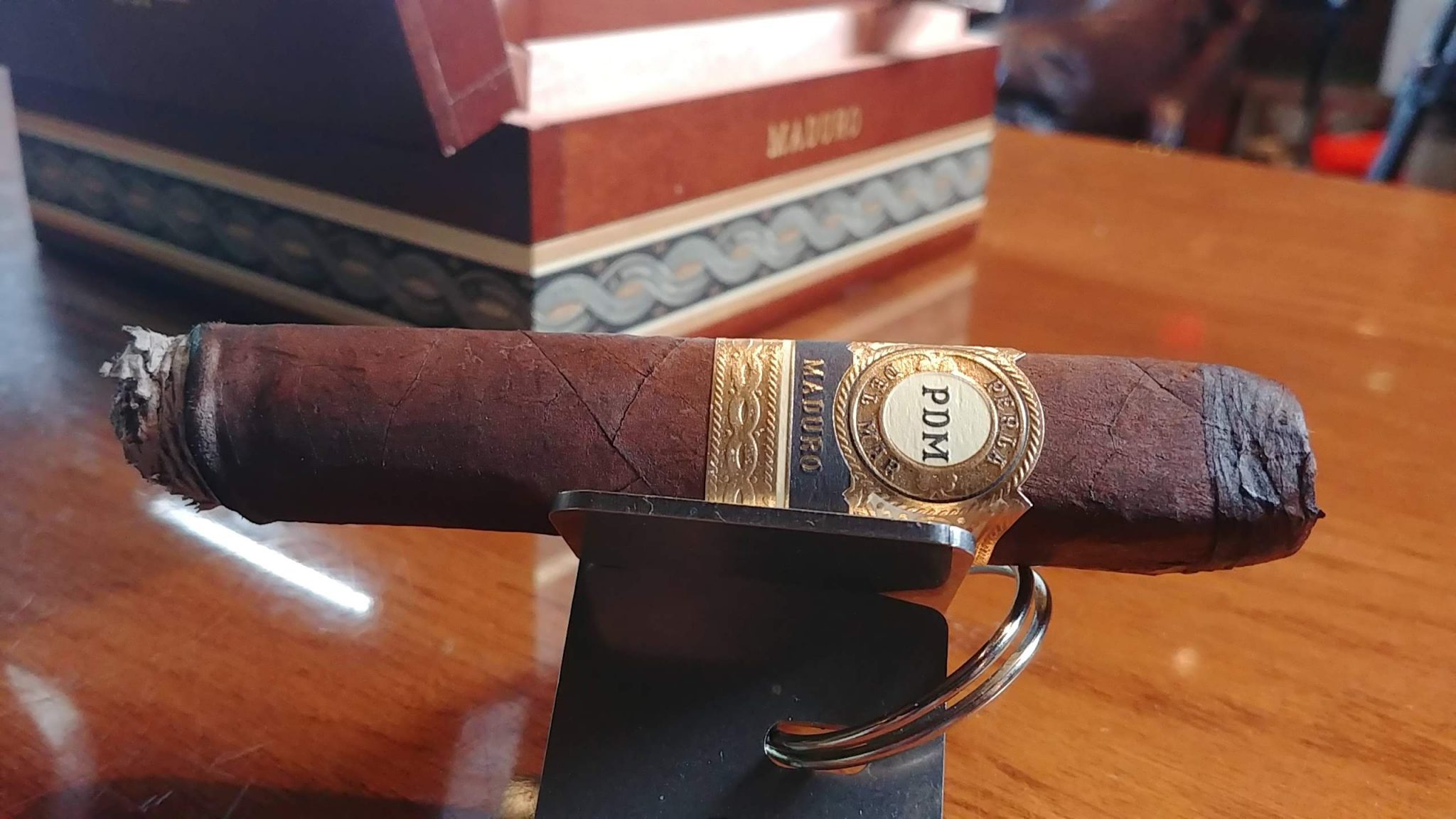 The profile is very consistent, but the big mover here is the sweetness…sometimes it’s more, sometimes less; it leans more dark chocolate, then it leans more tangy.

A very agreeable cigar – easy to enjoy, and “priced to smoke,” as Paul would say. If any of these names are part of your regular rotation: Macanudo Maduro, La Aurora and Fuente Maduro – add Perla del Mar Maduro to the list, because this is right there with them. Actually, Jared did a “First Time Maduro Cigars” buying guide in 2019 – and after smoking this Perla del Mar, I’ll be leaning on him to include this stick in an updated list.

Summary: I was a big fan of our last Perla de Mar Panel Review. We smoked the Corojo in the 6” x 60 size and I loved it—despite my normal thumbs down to big-ring cigars. For Perla del Mar Maduro, we’ve selected a more reasonable size: the Toro in a 54 ring gauge. I can tell that this stick is in the same family as the Corojo as I’m getting some repeat flavors. Notably, black licorice, wood, and citrus.

My first few puffs smoked spicy before Perla Maduro calmed down. Like the Corojo, it’s flavor forward without burning out your palate. An inch or so further, and I’m getting flavors of dark chocolate and coffee. There’s a refreshing citrus element to the smoke on the finish. Almost like orange or lemon. 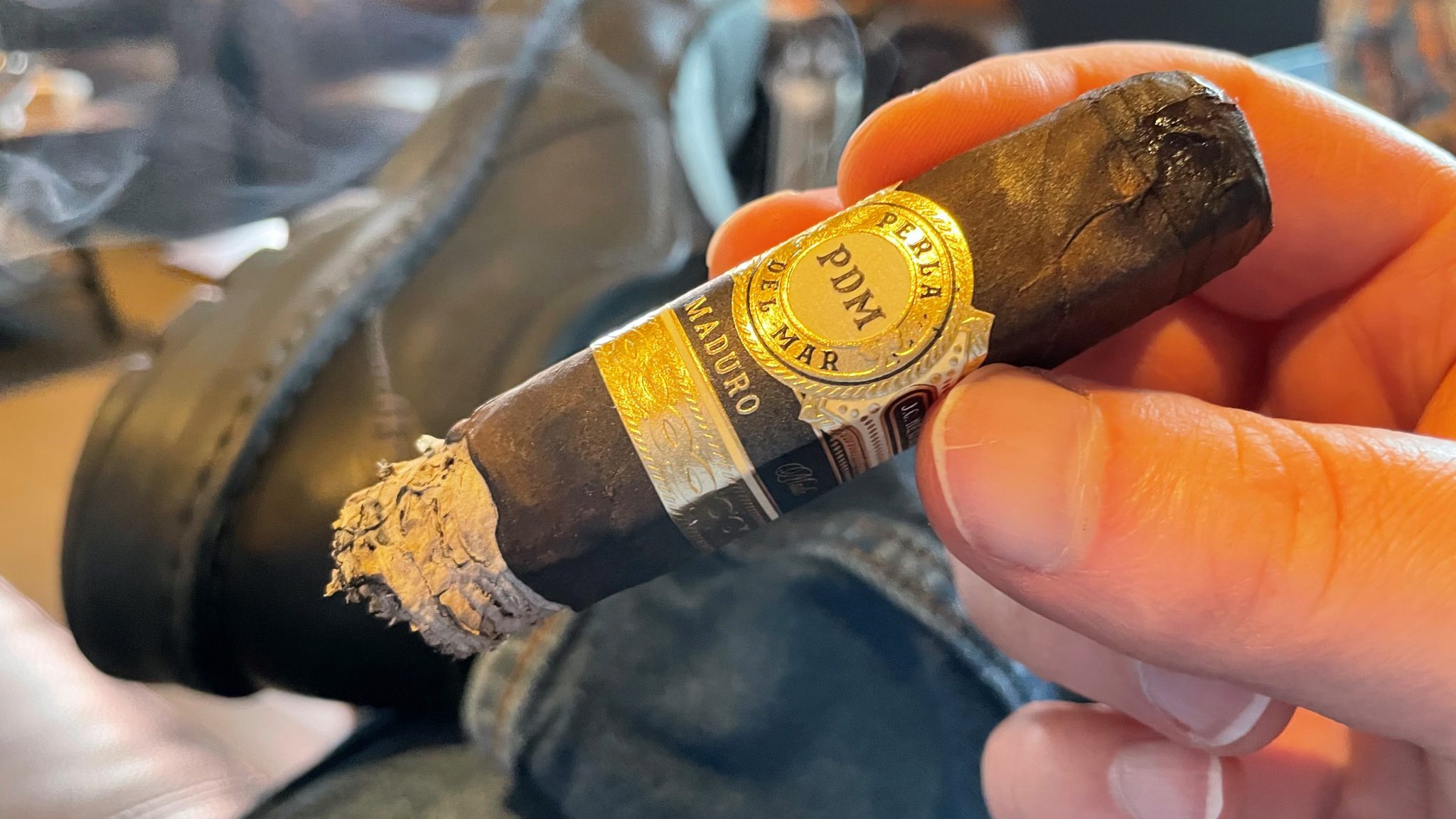 Near the sweet spot in the middle, Perla Maduro develops notes of oak (and white pepper through the retrohale). It smells like a mixture of campfire and peanut butter when I’m just holding the cigar. It’s even great when I’m not puffing on it.

The blend’s final third brings out the notes of black licorice and a woody sweetness. A fittingly delicious cherry to place on top. Once again, J.C. Newman has priced them quite reasonable. They’re under $8 a stick, and for the flavor I’m getting—they can take my money all day.

Construction: Elegantly dark and perfectly pressed. The wrapper has a leathery appearance and feel. I also found no soft spots. The triple seam cap was well done and sort of resembles a wooly hat over the head.
Draw: Good on both my samples. I used a v-cutter on my first and a straight cut on my video cigar.
Pre-light flavor: Leathery with sweet tobacco.
Toasting & Light: Not a problem. (I suggest using a single or double jet torch.)
Base flavors: Oak, sweet tobacco, leather, nuts, plus drive-by cocoa, cherry, and espresso.
Retrohale: N/A
Aroma: Sweet.
Burn & Ash Quality: Textbook.

Summary: This cigar hit all the right notes for me. I smoked my first Perla del Mar Maduro Toro on a very breezy and sunny day. It’s hard to see the flame under those conditions and I only hit three-quarters of the foot. So, I decided to test this cigar’s mettle. Within five minutes it corrected itself—even with the breeze—and turned out to be one of the best burning cigars I’ve had lately.

Flavor-wise, the key notes are woody, sweet, and nutty, with a mostly medium body. The cigar also issues good balance and a high-volume of smoke output. With that, I believe this cigar will appeal to cigar smokers who’ve already had a fair amount of experience and beyond. 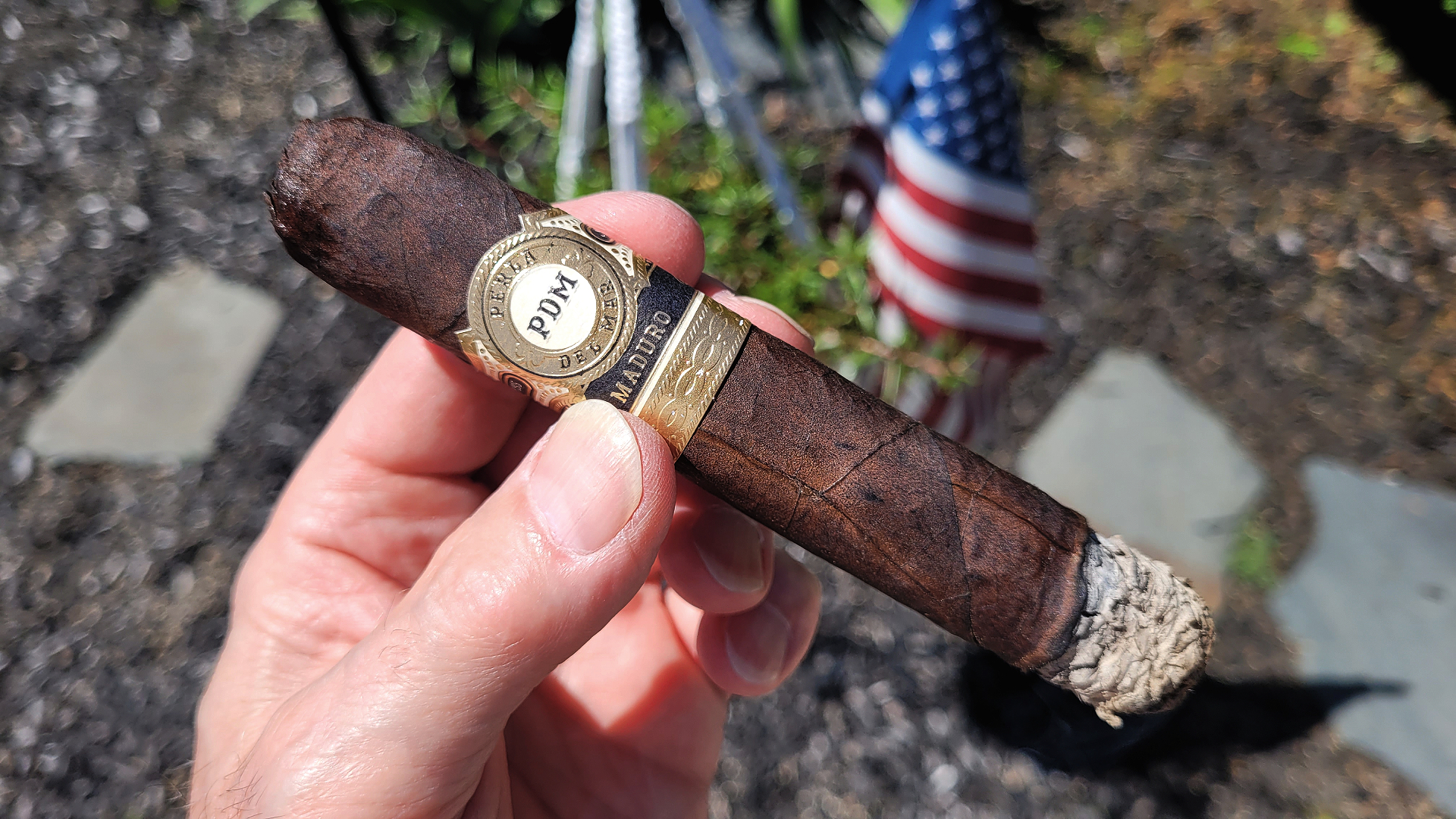 The cigar not only smokes slowly, it’s very consistent, too. It also revealed a few surprises including a rare 180-degree turn from earthy and bitter to sweet and leathery in the last third.

Knowing several cigar smokers who play golf, this cigar could easily fit the bill for an ideal golf cigar. It kept the flavors, the burn, and the body running smoothly like a well-oiled machine.

Suffice it to say… The Perla del Mar Maduro Toro makes a relaxing, long weekend afternoon smoke. However, I also think it has enough opulence to light up after dinner with a fine bourbon or brandy. If you love top grade Broadleaf wrappers and don’t like paying a fortune, you can’t miss. And there you have it.

Reading Time: 6 minutes Fonseca is now entrusted to the steady hands of the My Father family. Does it stack up to the original? Find that out and more in this Cigar Advisor Panel Review of My Father Fonseca!