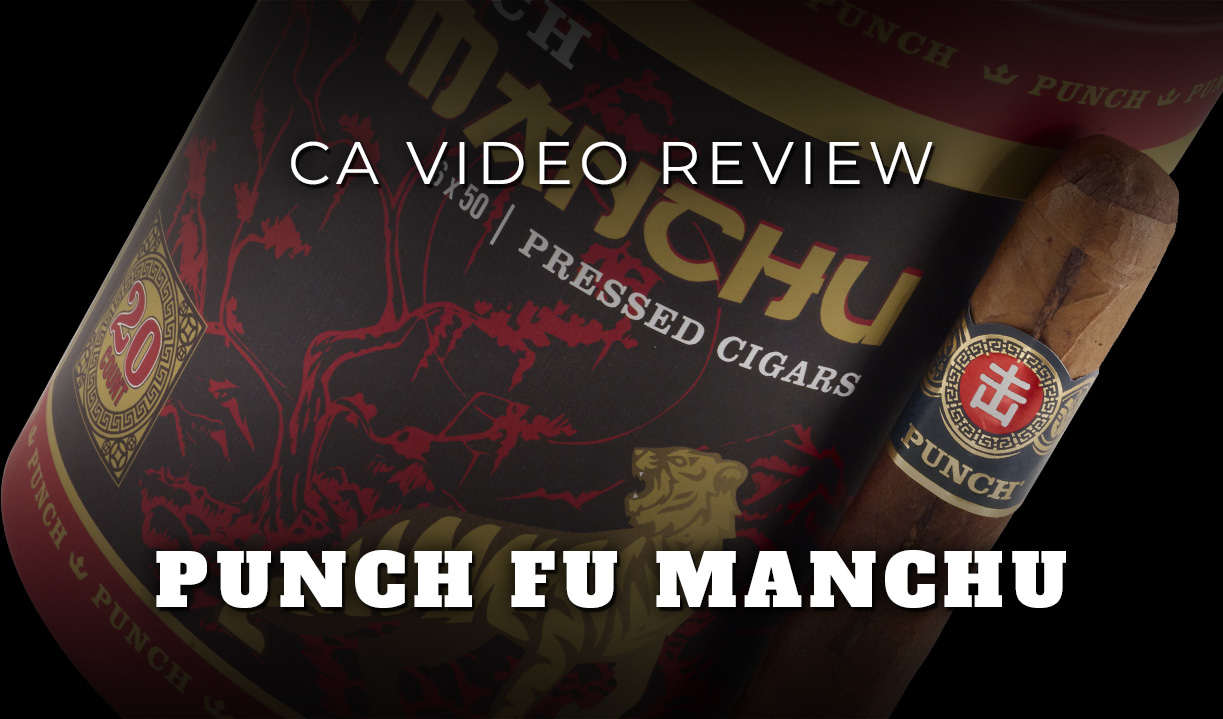 Back in 2019, Punch introduced Egg Roll, a blend that would kick off a wildly popular cigar series inspired by Asian food. They’ve since released Chop Suey and Kung Pow! – and now, of course, Fu Manchu. Thing is, they’ve taken a bit of a detour this time, trading food for fiction. You may have heard of Dr. Fu Manchu. You’d surely know his mustache if you saw it (and the long pigtail on the cigar bears tribute). The prolific, sometimes controversial, and villainous character from Sax Rohmer has appeared in more than 20 books, movies, and even comics since 1913.

The subject may have shifted, but the coveted packaging remains. Fu Manchu continues the previous releases’ tradition of collectible Chinese takeout-themed boxes. In this case, a soup container honoring the Year of the Tiger.

We’ve been impressed these past few years with more than the catchy theatrics of these smokes. Being desirably kitschy is one thing. Delivering on the cigar itself is another. It would have been a slow and easy pitch to create these cigars just as novelty, yet Punch has delivered solidly in the flavor department for each one.

One more thing – like the previous Chinese takeout releases, Fu Manchu is a limited-edition cigar. Only 6400 boxes were made.

Presented in containers of 20

Construction: Softly box pressed with a firm feel to it. The wrapper is attractive and rolled with a lighter Habano wrapper at the top third, which reminded me of the Joya Cabinetta. I also like the thin Manchurian style “braid” that runs under the band and down the side of the cigar which, at Punch’s suggestion, I did not cut.
Draw: Perfect.
Pre-light flavor: Musty and earthy.
Toasting & Light: No issues.
Base flavors: Peppery spice, earth, charred oak, black cardamom.
Retrohale: N/A
Aroma: Sweet tobacco.
Burn & Ash Quality: Exceedingly even and clean, revealing a soft, almost all-white ash.

Summary: An excellent draw provided a bold but far from overpowering start that was mostly earthy and peppery with a liberal volume of smoke with a sweet aroma. The cigar burned evenly issuing a smooth, balanced, and mostly medium-bodied smoke from top to bottom. Opening notes of peppery spice leave the party early, giving way to a more earthy smoke with a charred oak flavor in the first section. The midsection issued smoky-minty notes of black cardamom, while the final third presented a surprising, and perhaps appropriate, Jasmine-like tea flavor. 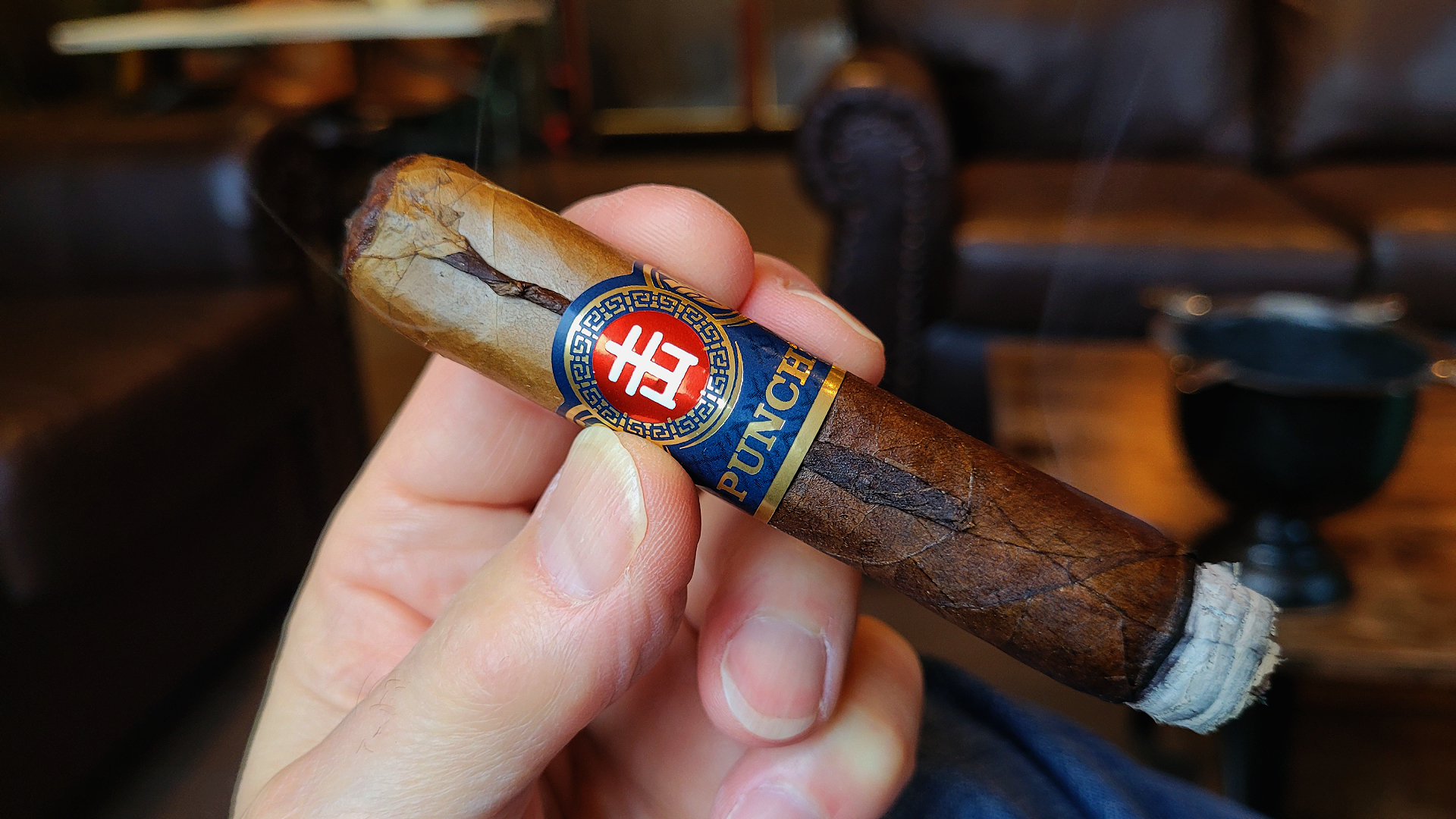 I was very impressed by how well the Punch Fu Manchu was made. I liked the pressing and the way the twisted strands of tobacco come out of the cap. Overall, I found the smoke smooth and balanced with a short flavor set. Its performance in terms of burn and ash were notably impressive. I thought the flavors, although pleasing, could have been more clearly defined. Earth, pepper, and charred oak seemed to carry the day. As I got down to where the lighter Habano wrapper began, I found the leaf particularly delicate, so be careful when you remove the band.

Suffice it to say… Although I view the Punch Fu Manchu as somewhat of a novelty cigar, which I often don’t care for, I do like its kitschier qualities. That aside, I think cigar smokers who like this particular flavor profile will take it a little more seriously and appreciate its more than reasonable price.

Construction: Unique look with the yellow-hued wrapper at the top, long thin pigtail, and smooth appearance. You won’t mistake this cigar for anything else in your humidor.
Draw: No issues. Smooth all the way through.
Pre-light flavor: Sweet. Some cocoa undertones, light spices, and raisin.
Toasting & Light: Black pepper, cocoa, and a hint of cherry.
Base flavors: Hot chocolate powder, fruit, black pepper, and cedar in its later stages.
Retrohale: Lots of pepper. Cherry hints on the finish.
Aroma: Has a mocha coffee quality to it.
Burn & Ash Quality: Excellent.

Summary: Not only is Punch Fu Manchu up there with Egg Roll, Chop Suey, and Kung Pow!, it may have even dethroned Chop Suey as my favorite of the series.

The cigar starts off sweet with a silky layer of cocoa and cherry, plus pepper in the background. This soon evolves into a hot cocoa mix kind of flavor that I’ve only experienced in a handful of cigars previously. Additionally, there’s a mixture of fruity notes that shine against that spicy black pepper. 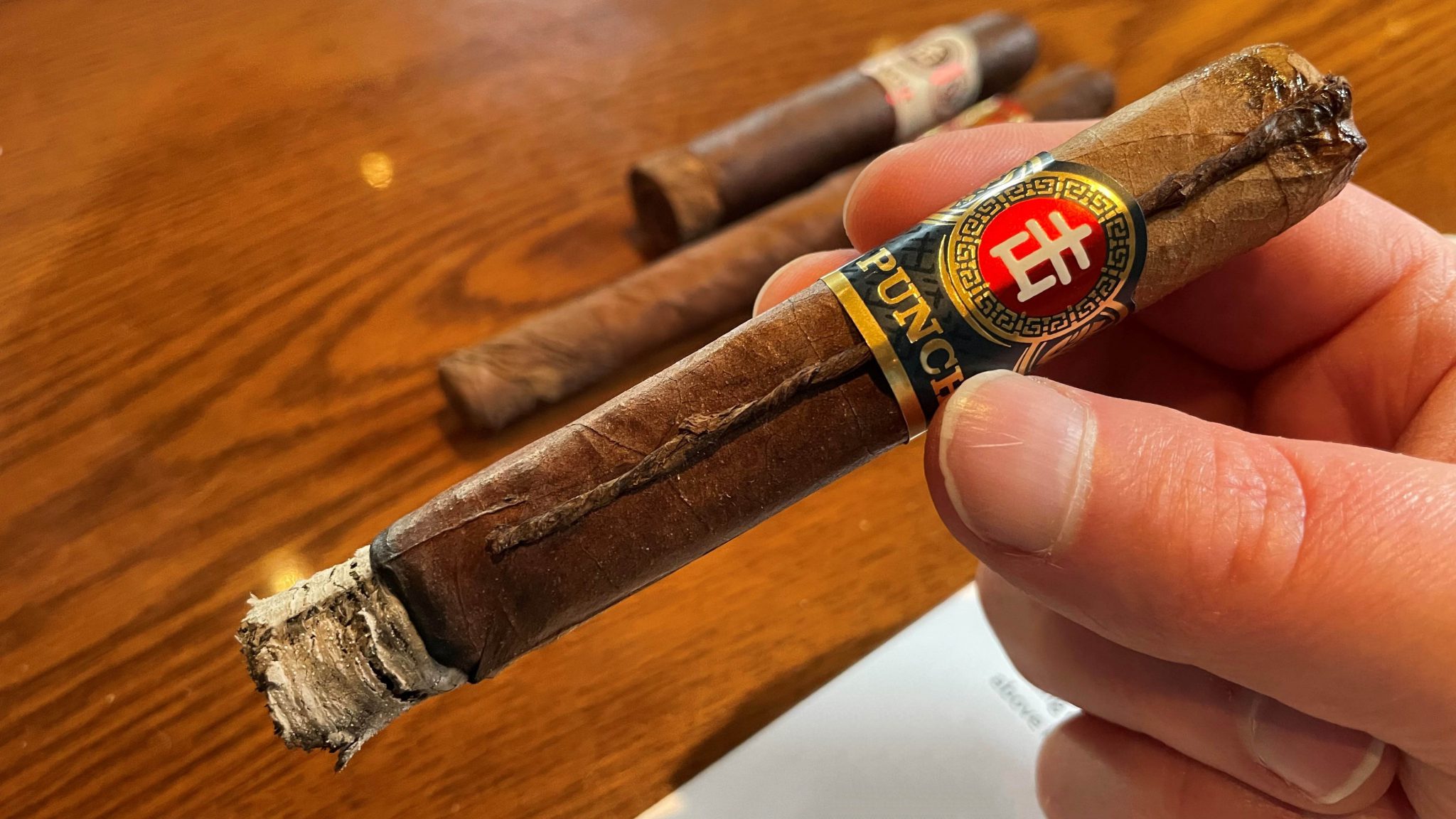 Flavors shift toward wood – mostly cedar – and an overall earthier profile as I smoke toward the band. Fu doesn’t finish as sweet as it started, but I’m still enjoying it. And if you’re brave enough to pull out your tweezers and make it all the way to the secondary yellow-hued wrapper (which is also Honduras Habano), you’ll taste what I tasted: a slightly grassier profile that leans on the veggie side of flavors.

And it’s under $6 a pop. But seriously…if this sounds like something you’re into, consider jumping on it sooner than later. I know there are tons of “limited edition” cigars that claim to have low stock even though they’re sitting on shelves a decade later, but these Punch releases are truly rare. All the previous runs I talked about above have long been sold out.

Construction: Fu Manchu has a two-tone wrapper, both are slightly oily. The long pigtail originates from under the cap – so leave it on. Nice soft box press.
Draw: Moderate resistance. It produces a good bit of smoke, but I feel like the draws could be fuller. Eventually, it does open up.
Pre-light flavor: Slightly sweet, with a big fermented tobacco note. Taken together, it gives the cold draw a raisin taste, along with nuts.
Toasting & Light: Espresso and oak, with a peppery finish.
Base flavors: Espresso, leather, salt, nuts and earth.
Retrohale: The retro is actually very aromatic – think ground tea leaves. And there’s pepper in there, but it doesn’t burn as much as you’d think.
Aroma: Mostly hay, but has a toasty quality.
Burn & Ash Quality: Straight burn, with an almost-white ash.

Summary: The Punch Fu Manchu starts off with oak, a hint of espresso and a quite sizeable amount of pepper in the finish. About an inch in the coffee taste is replaced by more noticeable expression of salt and leather. By halfway, it’s transitioned again: mostly earth, and the finish is loaded with pepper. The crazy thing is, for as bitey as that taste is, it doesn’t burn when I retrohaled. Finally, this stick wraps up with some drive-by flavors of dark chocolate, cedar and nuts. And even though you probably thought, “gimmick cigar” when you first saw it (yeah, it is) – it’s actually pretty good. Because someone FINALLY put as much work into the recipe and profile as they did the packaging.

Fu Manchu is medium-full in body, and that trailing pepper sensation – boy, that’s gonna stick with you. A great burn around the firepit with scotch, and maybe even better with a red wine that has oak and pepper tasting notes on the label. 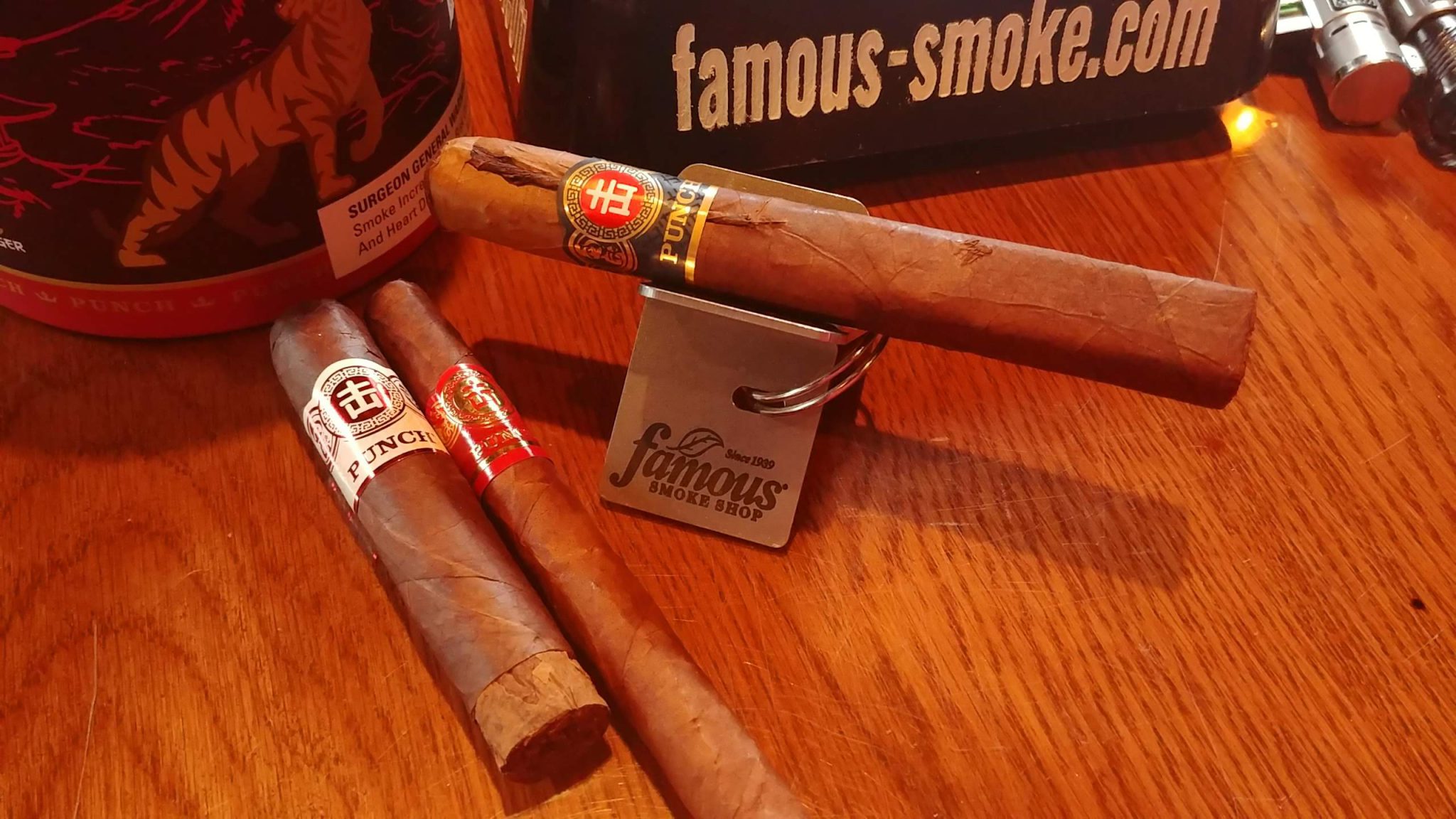 For as much as Punch has boasted that it’s “the cigar that lives up to its name,” let’s admit it – the Ligero arms race that has raged over the past few years has given us much beefier cigars than Punch ever turned out. But with this cigar’s headier flavors and lingering burn, this Fu Manchu could get Punch back into that conversation because it really is…punchy. There’s a fortune on the inside of the band. Mine read, “Either way, this was a good choice.” And that actually was true. This really should be a full-time, regular production cigar.

Smoke this if you enjoy the thrill of limited-edition cigar blends, and share a couple with your pals so they can take in the presentation – because the flavor really does make this an enjoyable burn.

Summary: I can’t remember the last time I saw a limited-edition premium cigar priced for the everyday guy. I mean, even at the manufacturer’s suggested retail, Punch Fu Manchu is outrageously affordable.

Keeping with naming their annual Lunar New Year limited edition releases after American interpretations of Asian culture—previous incarnations paying homage to Western Chinese food—this edition draws its name from supervillain Dr. Fu Manchu. And as to whether the pigtail running down the cigar is intended to resemble a mustache, ponytail, or as I contend—the long thin beard affected by Asian men in the past—is a topic that remains open to debate. 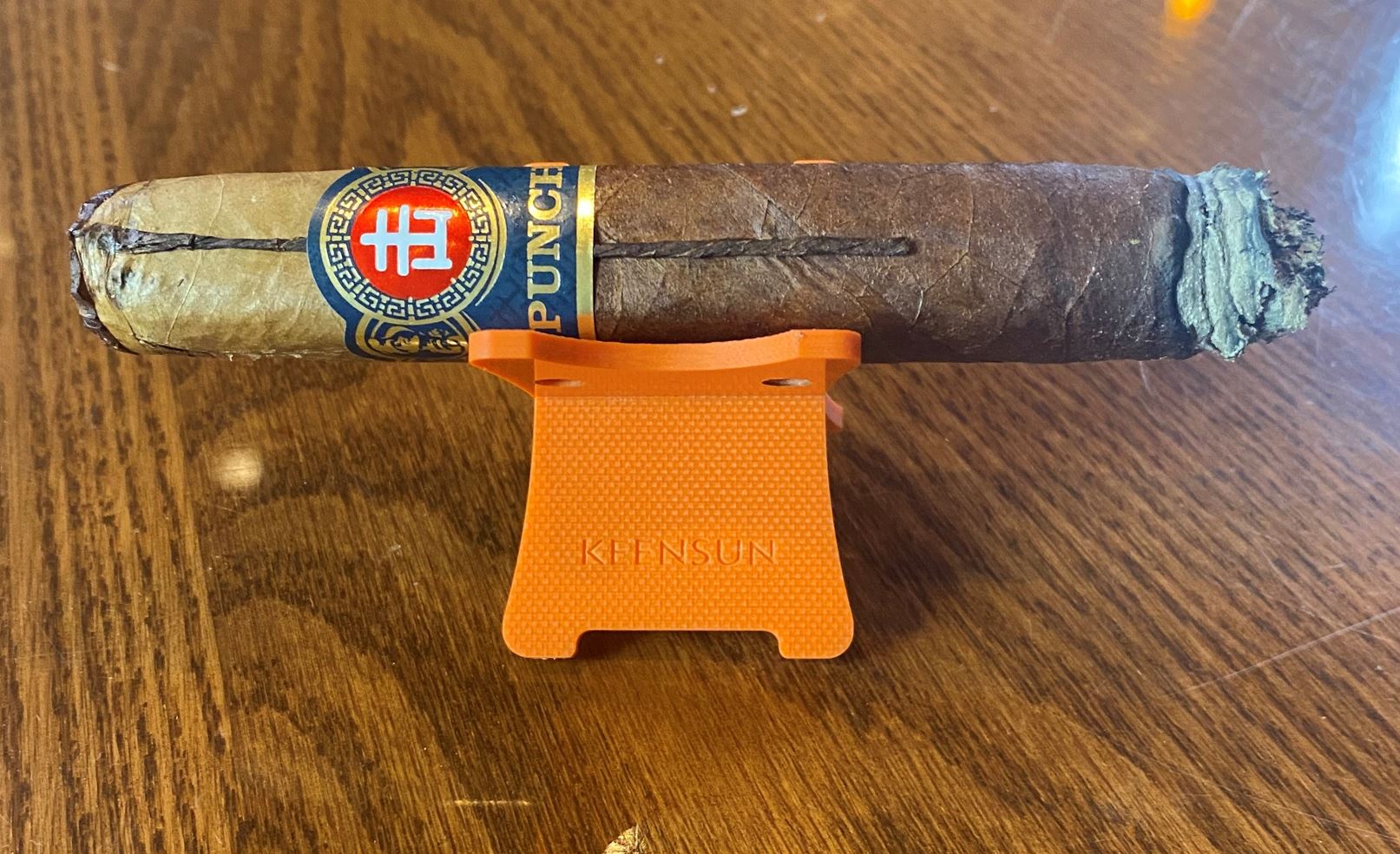 As for the cigar? The Punch Fu Manchu featured a lot of flavor off the bat, and that was it. In my experience, the profile was linear meaning what I tasted in the first third was pretty much what I tasted throughout. I got opening notes of pepper and baking spices offset with a raisin sweetness. Some dark chocolate and espresso entered the mix and were soon joined by wood and creaminess. The strength hovered around medium-bodied, and the Fu Manchu burned like a champ offering up copious amounts of smoke.

While the name and packaging are somewhat gimmicky, Punch Fu Manchu isn’t a gimmick cigar. It’s good. And Punch Fu Manchu is a rare specimen in our world—a limited edition premium without the exorbitant price.

Read More
Cigar Buying Guides
Honduran tobacco has a distinctive flavor profile that smokers have come to crave; see why, with these 10 underrated Honduran cigars you're going to love.
Read More