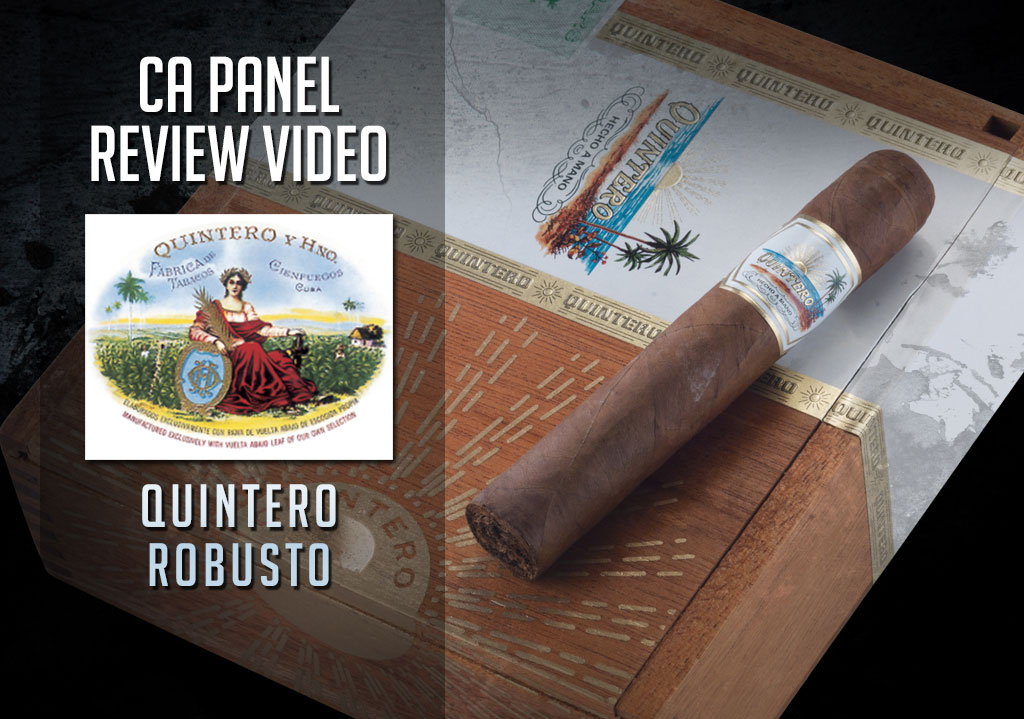 The Quintero Cigars Back Story

As we were preparing for this Quintero cigar review, some of our background research revealed a very interesting, 5-chapter story about this cigar. In a nutshell: the Quintero cigar brand was created in 1924 as Quintero y Hermanos or Quintero and Brothers, when Agustin Quintero and his four brothers opened a small handmade cigar factory in the town of Cienfuegos, Cuba. In the early 1960s, the Quintero brand was repositioned as a mostly machine-made cigar using short filler tobaccos and sometimes sold in aluminum tubes. In 2002, to promote Cuban cigars as premium products, Habanos S.A. discontinued machine-made cigars in favor of handmades, so Quintero returned to a hecho a mano selection. In an effort to bring the Quintero brand to the U.S. market, in 2006, Altadis released a Honduran Quintero line made at their Santa Rosa de Copán factory with a blend of Honduran and Nicaraguan tobaccos. It was eventually discontinued, and now, they’ve rebooted the Quintero line with the new Dominican-made blend we’re smoking today.

To see our Quintero cigar review and get the details on what we thought of this Robusto, please click on the video; and as always, comments are welcome.

Burn / Ash Quality: Excellent. Burn is even with a thin carbon line. Ash is dark grey with black stippling and firm. First ash dropped at half an inch leaving a crown-shaped ash in its wake.

Having smoked two Quintero Robustos back-to-back – one in the afternoon after smoking two cigars earlier in the day, and one the next day in the morning for the video – what we have here is another fine release from the folks at Altadis USA, who’ve resurrected this Cuban-born brand, hopefully, for the last time. An Honduran-made attempt 10 years ago didn’t make it, but they nailed it on this new Dominican blend.

The construction was first-rate: Well-packed, well-made, and the burn on both cigars was superb. The flavors were also consistent for both cigars; mostly very earthy and leathery with nutmeg, some sweet tobacco and a hint of cedar, all nicely balanced to the nub.

For less than $5.50 a smoke for the Robusto, the price is pretty reasonable, too. If you like dark, earthy-spicy Nicaraguan cigars, give this Dominican a shot. It has a lot of the same qualities. And because it sits somewhere in the medium-full range, newer cigar smokers can tap into this well-made little flavor bomb.

So, Altadis reintroduces a Cuban heritage brand at an incredibly affordable price, and as far as smoking value goes, these peeps have knocked it out of the park!

To me, this falls somewhere between medium and full-bodied but as far as the taste goes, it is wickedly full-flavored as you get a blast on the palate every time you take a puff. Right off the bat there’s just the slightest hint of pepper which becomes taken over by a delicious hit of nuttiness. As you start to get about halfway through, there’s really nice notes of espresso and I even got like an anisette in there, which just naturally goes with a good cup of espresso.

The appearance is inviting with a smooth reddish Habano wrapper that is dark, supple and oily. It’s rolled extremely well, too, with a super smooth draw, and the ash is solid as it squares off when you tap it into your ashtray.

While the Quintero isn’t an overly complex cigar, there are some real blasts of flavor which make it so enjoyable to take each puff. And when you take into account a price point of around $5, this stick is a major-league value beyond belief that you’ll want to add to your rotation… I mean, that is, if you like really tasty cigars.

Construction and Overall Appearance: The Quintero robusto is well-packed, and sits solid in the hand; the wrapper leaf is a veiny Habano, and the abundance of oils is a nice touch. I’d call it decent construction and give it a 6 or a 7, plus bonus points for a really well executed triple cap.

Draw: Each sample I smoked for our Quintero cigar review had a good draw, with just a touch of resistance.

Pre-light flavor: There’s some really nice stuff going on here on the pre-light, as you have a natural sweetness coming off the tobacco, along with a tangy sensation that hits the palate real nice.

Toasting & Light: Quintero takes flame pretty easy – the burn line starts up quick but a little wobbly, and stays that way throughout the duration of the smoke. More on that in a minute…

Base flavors: There’s some espresso lingering in the background, but the dominant flavors – which are very much evident – are nuts and earth.

Aroma: I thought the Quintero’s aroma was pretty mellow, with a bit of a floral touch.

Burn / Ash Quality: With an ash that’s flaky and dark gray, the burn line is just ok – no touch ups, but far from perfect. They’re new, so with some more rest I’m betting they’ll perform a little better for you than they did for our Quintero cigar review.

Balance of flavors: The nut and earth flavors are pretty locked in throughout, and really stand out way above what tastes the pepper and spice bring in. Quintero may have only two flavors or so, but they are really big flavors.

Consistency: From start to finish of our Quintero review, all three sticks (I had 3) were very consistent with that earthy, nutty flavor.

This Quintero Robusto made for an interesting smoke. I wouldn’t call it the most beautiful example of a premium handmade, but it’s still very nice, in that “girl next door” kind of way. Frontloaded with a bite of pepper, it dropped off to a creamy smoke almost right away and mellowed quite nicely. Good smoke output from start to finish, and a surprisingly robust smoke – Quintero has body, but without the bite. And what I mean by that is that the flavors aren’t wildly diverse, but they are intense in just how much of that flavor is there. I’d definitely peg this at medium, maybe medium plus, not too rich or too heavy.

Before we shot the Quintero cigar review, Gary and I compared notes – he said “very earthy.” And I couldn’t put my finger on it until he said it, but that’s exactly what it is. It’s very apparent, and a very fresh earth – like the same sensation that hits the back of your mouth and your taste buds when you walk past a fresh delivery of loam and top soil at the garden center in Lowe’s or Home Depot.

Some interesting history here that came up in our Quintero cigar review video, about this cigar’s roots…originally a handmade Cuban brand that was essentially “demoted” (for lack of a better term) to a machine made, then reintroduced mid-2000s as a hand rolled premium. Before we shot this review video, I talked to someone who said the Cuban version of Quintero could be hit or miss – whether or not he meant the machine made or the hand rolled, I’m not sure. But as for this Cuban exile alternative version of Quintero, this one definitely hits. Overall? I’d call it a pretty satisfying return on a $5-and-change investment.

Hey gents. Just watched your video. Great reviews and I will sign up to see and hear you live. Thanks. CCC

Happy holidays to all as well

Assuming this smoke is as ggod as you say it is, why on earth would Altadis associate it with the unmitigated dross that is Cuban Quintero?

5 Things You Need to Know About… Making Cigars