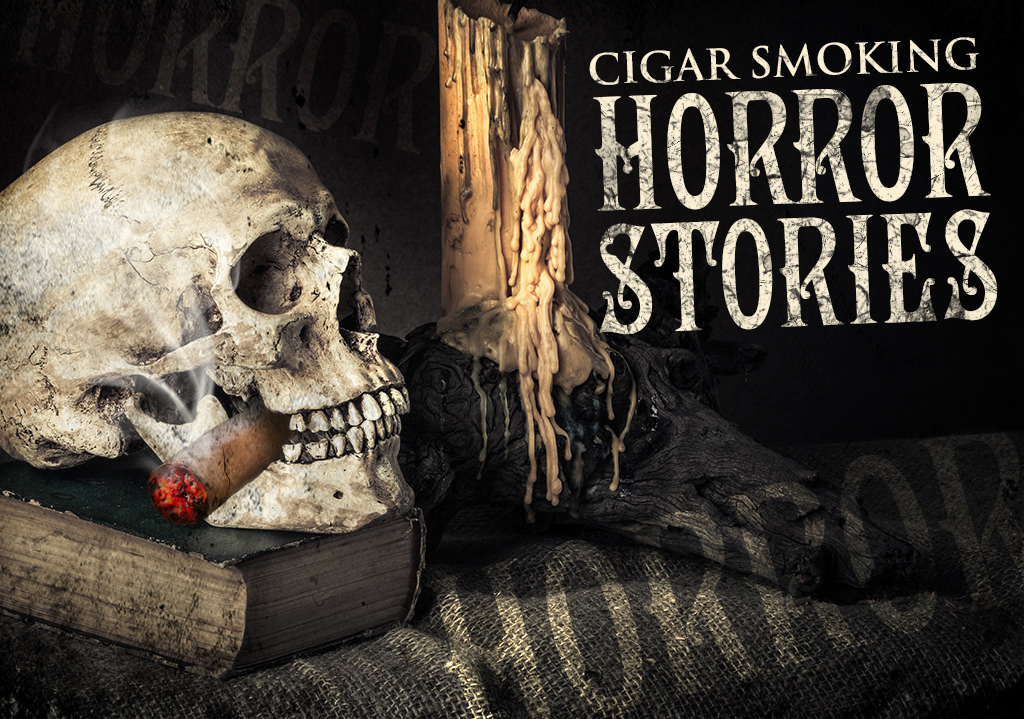 I’m willing to bet anything that for those of you reading this article, cigars are without question a joyous part of your life. I mean, what is better after a long, hard day’s work than coming home, heading out to the back deck or patio and firing up a delicious and aromatic hand-rolled cigar. It is simply amazing how all the trials and tribulations of the day are just swept away in a swirling blue puff of smoldering tobacco goodness.

Then there’s the camaraderie, the bonding you relish with fellow smokers, waxing endlessly about the problems of the world but never accomplishing anything but an hour or two of pure mental and physical relaxation. Yes, time with your cigar is truly the ultimate stress reducer that no $200 an hour session with a shrink could ever compare to. And it seems that the act of cigar smoking is always done for pleasure and during good times and celebration, like at a wedding or for the birth of a child (even though the nanny-state haters have messed with that as much as they possibly could).

But not so fast, oh lover of the lavish leaf… yes, there are those rare occasions when lighting up can actually become an awful and discomforting pain in the ash. What… you don’t believe me? Well, then, listen up ‘cuz I’m here to share a few of my most personal anecdotes about the darker side of cigardom and be forewarned, what you are about to read is not very pretty…

There are jerks and morons in all walks of life, but cigar-tards are the ones who really get under my skin. These leafy losers were prevalent during the boom of the mid to late 1990’s and were famous for sucking the fun out of any herf. I remember meeting this one braggart who was dressed to the nines at a cigar dinner in a local restaurant. While flashing around his shiny Rolex and gaudy pinky rings, this obnoxious Trump wannabe was telling everyone how our sticks were lame and his was the best there were. When I finally (and reluctantly) asked him the brand, he held up his stick, pointing to the band with a smirk and said, “Hecho a mano, of course… best cigar in this room.” Craftsman doesn’t even make tools as big as that guy. 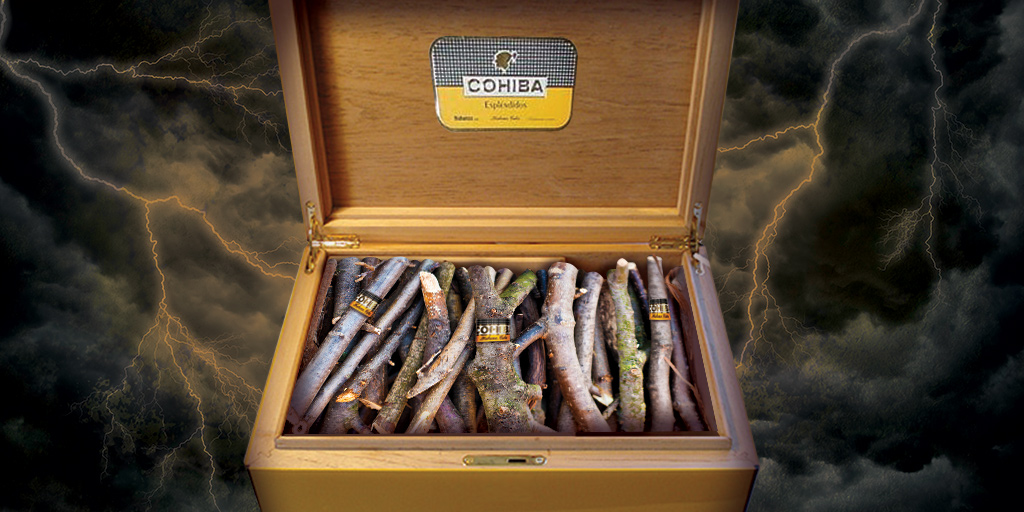 The worst were those nitwits enamored with Cubans that were always fake (I referred to as Faux-hibas.) This one putz at a summer pig roast was waiting all day for his buddy, Lenny to arrive from the airport with a couple of boxes of Esplendidos. After hours of anticipation, Lenny showed up with his contraband, hoisting the boxes high for all to see. As the gathering of drunken, swine-filled sloths circled around to grab their fill, Lenny cracked open the forbidden fruit. You swore that when he pulled back the lid there would be an angelic glow emanating like from Marsellus Wallace’s brief case. Not. What I remember most was that the tobacco wrappers were basement door gray. I had never really seen a gray cigar before, and each stick was noticeably a different size and ring gauge. And the bands looked as if some third grader whipped them up on his daddy’s iMac. Worse yet, this bone head got hoodwinked for $250 a box and wanted everyone to chip in. I can tell you for sure that Doritos were the only thing I was chipping in that afternoon.

I remember the first time somebody ever handed me a torch lighter. A bunch of my buddies were outside ready to herf it up on a warm summer day as the sun was glaring. I had never used a laser before and when I clicked the button, I heard that distinct hissing of gas but couldn’t see a flame. So, in all of my Polish-born brilliance, convinced there was no flame, I quickly ran the lighter back and forth across my forearm. What’s amazing is that while burning hair and searing human flesh gives off quite the nasty smell, the site of your own bubbling epidermis is like something straight out of an old snuff flick. Two decades later, it’s still the highlight of our yearly block party.

Then there was the time I adjusted my lighter at a business cigar dinner, certain I had turned the flame all the way to the lowest setting. Wrong. As I held the torch up to the foot of my robusto and clicked away, a five-alarm flame shot towards my face, setting my $75 silk necktie ablaze while scorching my beard to a crisp. I remember my buddy Willie tossing a pitcher of Sprite in my face while beating me down with a wet dinner napkin. I’ve always been grateful that this was before cell phone cameras existed.

And of course there’s always the times when smoking and talking away with your cigar pals and paying absolutely no attention to what you’re doing, you go and stick the lit end of your cigar in your mouth. If my memory serves me right, I’ve only done that twice, and both times was asked if my mother had any children that lived.

WTF Were You Thinking?

Joe was a big time cigar guy and had an awesome cabin on a lake. So he invites me and a few pals up for some great bass fishing right from his scenic backyard. Everyone brought a little something for sharing like dry-aged steaks, good single malt, and of course, my way of saying thanks was a box of Padron 1964 Anniversary maduros for all the boys to enjoy. Joe’s buddy Fred was in charge of collecting the swag as I handed the Nicaraguan goodness to him as we prepared for some serious fishing and a killer dinner to follow. “Treat these with care, Freddie,” I said like an overprotective dad, “these cost a pretty penny.”

As we sat along the beach, throwing the bull for several hours and casting our lines into the water, I thought it a good time to finally break out the smokes. “Hey Fred, how ‘bout digging out a cigar for each of us?” I asked with excitement. “No prob, Tommy, I don’t know anything about cigars, but you guys enjoy.”

As I snipped the cap and put that Padron to my lips, the pre-light flavor and the aroma was a bit odd to say the least. Everyone had the same face on as Joe asked, “Zman, what’s up with the funky smokes, I thought these were the top of the line?” I was as puzzled as everyone, and as I lit up, it stunk a whole lot worse. So, I turned to caretaker Fred and asked him to break out a few more so I could check them out. And much to our total freakin’ bewilderment, Fred cracked open the lid of the bait cooler, and sitting there amongst the wriggling night crawlers and the herring on ice was my box of precious 1964’s. While my jaw dropped lower than a used car salesman, my mouth began to erupt with some of the more colorful epithets I may have ever delivered. If there was a metal shovel handy… or maybe a baseball bat wrapped in barbed wire, Fred would have gone home to his family with a whole new look. While the boys had to work hard to calm me down, I finally forgave Fred for his blatant ass-holiness, which Joe said was very big of me. And during our steak dinner, each time Fred would look away, I hacked a loogie or six on his porterhouse. Revenge is just never a pretty thing.

So, there you have a few instances where enjoying a good cigar was anything but that. If you’ve got your own tale of leafy woe to tell, share it in the comment section below. I’ve got a whole lot more where that came from, so maybe I’ll share a few more zingers next time. Until then, know this: You can’t always see a torch lighter’s flame in the daytime…. Trust me on that one.

That last horror story was a killer, you’re a better man than me

Some of those stories sound frightenly familiar. Sorry, but the one who put the cigars in the bait chest would have been used for alligator bait down here. “I’m sorry! He fell off the boat and the gator grabbed him before we could get him back in the boat.”

The lighter stories are one reason why I prefer matches.

I gave a cigar to a club promoter friend of mine.. He lit the wrong end and ruined the whole thing lol good thing it was inexpensive. I knew he wasnt drunk he just misheard what i said about lighting it lol

Laughed my ass off. Thanks for sharing.

That reminds me… I wonder if my Hecho a Mano en Cuba smokes are still any good. I keep them in an old beer stain on a bay window ledge so people who walk by will ask me about them. 🤣🤣🤣

Reading Time: 6 minutes Referred to in the trade as a “Cuban Sandwich,” these are handmade cigars rolled with a blend that consists mostly of short and medium length filler tobaccos. And guess what else? A lot of these cigars are every bit as flavorful and satisfying as long filler cigars. So, let’s look in more detail. . .