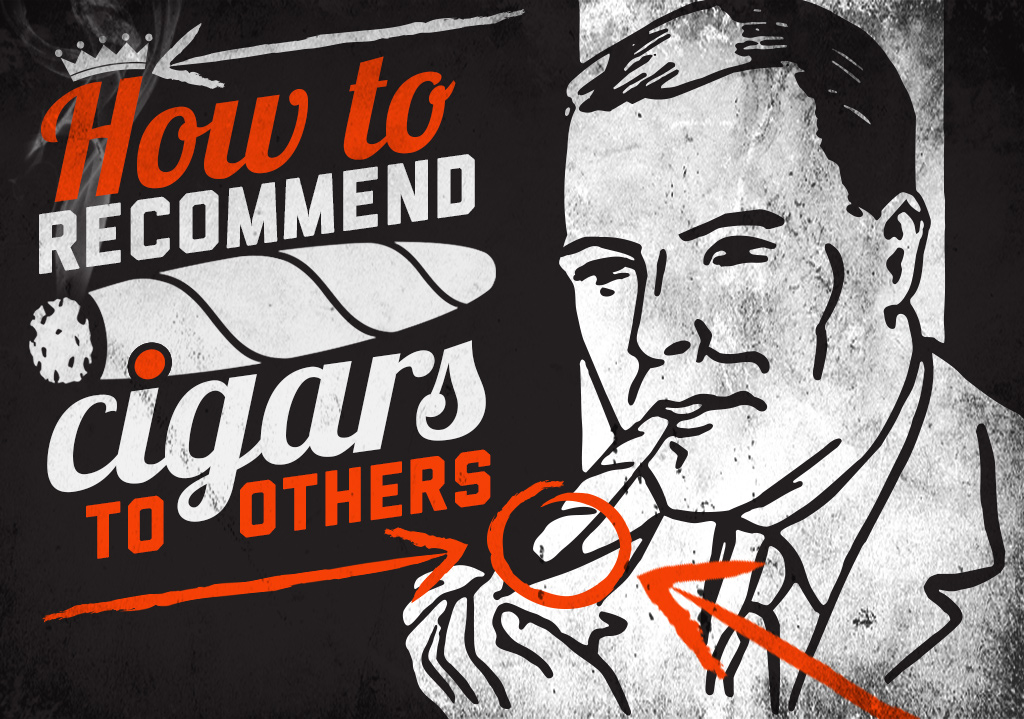 How to Recommend Cigars to Others

If I’ve said it once, I’ve said it a thousand times… cigars are a VERY subjective thing – what I love you might say “eh”… what you rave about, I might think is a bona fide camel turd. Or, we might both love the same stick… or to be more precise, the profile of that stick.

THIS is the reason why recommending cigars to others is not the easiest thing in the world. If you know what they generally like, well, okay, yeah, that makes things kind of simple. But when you don’t know the type of cigars they enjoy, then the task is a whole lot more difficult to figure out.

SO, being the benevolent cigar smoker that I am, I’ve listed several reasons that I can think of where you want to recommend cigars…

The rule of thumb is almost always to start a novice off with milder, Connecticut Shade wrapped smokes – something that’s mellow, easy on the palate with a nice aroma. As an analogy, I always say that when you first begin drinking wine, you never start with zesty heavy Cabs or a deep, rich peppery Shiraz because they’re just too much for the untrained palate to handle and appreciate. So, the same goes for cigars for new smokers.

Some good brands to begin with are Ashton, Romeo y Julieta Capulet, Montecristo Classic, Alec Bradley American Classic, AVO Classic, CAO Gold, La Floridita Gold, Rocky Patel Connecticut, and yes, even Macanudo and Baccarat. For those of you who just stuck your nose in the air about those last two last suggestions, Macanudo and Baccarat are two of the top selling brands in the U.S. because they really do appeal to the audiences we’ve named here.

It’s time to introduce them to medium-bodied cigars – sticks with bigger flavor profiles, heartier blends of leaf, and wrappers that ramp up the taste a bit. Here’s where they can experiment and start to gravitate to certain flavor profile that appeal to them. Now you can get them to try wrapper leaves like Cameroon, Corojo, Habano, Sumatra, Honduran, and best yet, maduro. Many novices are deathly afraid to try the darker looking smokes, but a dark leaf doesn’t have to mean strong. Many maduros with their natural oils produce a sweeter flavor, so, a medium bodied blend featuring a nice oily maduro wrap can be super tasty without being over powering.

So the next step – cigars that are medium to full or just flat out full bodied, full flavored tobacco bombs. At this point, they’ve heard you rave about your favorite flavor beasts and they are no longer afraid to dive into the likes of Nicaraguan maduro and oscuro, Connecticut Broadleaf maduro, Mexican San Andreas, Brazilian Mata Fina and Arapiraca wrappers. And of course, it’s time to introduce their eager palates to the world of ligero, the leaf that is used as filler to ramp up the flavor and strength. At this point, you’re also introducing them to the wonders of balance and complexity as well – where they consciously notice how a cigar’s flavor profile changes as you’re smoking it and the different notes they give off like coffee bean, dark chocolate, cedar, and oftentimes fruit or even floral notes.

I review a lot of cigars for Cigar Advisor online and in videos and again, I always try to stress the subjective nature behind cigar reviewing and make it clear that this isn’t fact, it’s just opinion – this is what I like or don’t like, but you should try it for yourself if you like this kind of profile and these particular flavors. I also always like to make clear the type of cigars I happen to enjoy and the profiles I gravitate to. As for the cigar, you first want to let them know if it’s mild, medium or full, then the tobacco blend and the wrapper origin.

As far as the flavor notes, well I made it pretty clear in my previous article The Flavor Profile Debate that there are definitely basic things you’ll get the taste of, and organically cultivated Bavarian Pfeffernusse is not one of them. I think if you follow my advice in that article, you won’t be ridiculed and referred to in social media as a liquid based feminine hygiene product. And if you really want to get into an in-depth soliloquy on the cold draw flavor and what the ash looks like every freakin eighth of an inch, well, that’s your call, but the goal is to have the reader make the decision on whether to try the cigar, and not to bore him into a comatose state. Finally, you should always say if you like it or not and why. And if it’s not your cup of ligero, you can always tell ‘em that if they usually like the kind of smoke you just described, that they should try it for themselves.

I always get asked for cigar gift recommendations, but if they don’t know what the person receiving the gift normally enjoys, well, that makes it kind of tough. First off, if they have no clue whatsoever, I always suggest a medium bodied stick. That way, a mild smoker can handle something a little fuller than usual, and a full bodied smoker can always enjoy them pre-meal or earlier in the day. Also, go with well known brand names that they may have heard of which will make them feel that it’s supposed to be good. For instance: Cohiba, Montecristo, Punch, Romeo y Julieta or Arturo Fuente.

But if they do happen to have some idea of what the gift recipient smokes, but don’t know the brand, you can always try to dig for some clues with the right questions. I’ll always ask if they recall what the color of the cigar was or even the color of the band. You might even toss a bunch of known brand names at them to see if it rings the proverbial bell. And maybe if you have a large enough sack, you can even do a little reconnaissance mission and rummage thru their ashtrays and at last resort, break into their home and crack open the humidor.

In Closing… As I’ve made it pretty clear here, your love or disdain for a cigar is purely subjective and recommending a cigar for someone to try isn’t always the easiest thing to do. Hopefully, some of my suggestions will help you become a better cigar humanitarian as you spread the leafy word in the name of all that is smoky.

[…] Recommending Cigars Subjective – [suhb-JEK-tiv] adjective existing in the mind; belonging to the thinking subject rather than to the object of thought (opposed to objective). If I’ve said it once, I’ve said it a thousand times… cigars are a VERY subjective thing – what I love you might say “eh”… what you rave about, I… Cigar Advisor […]

The Best Cigar Sizes for Sampling the Blend