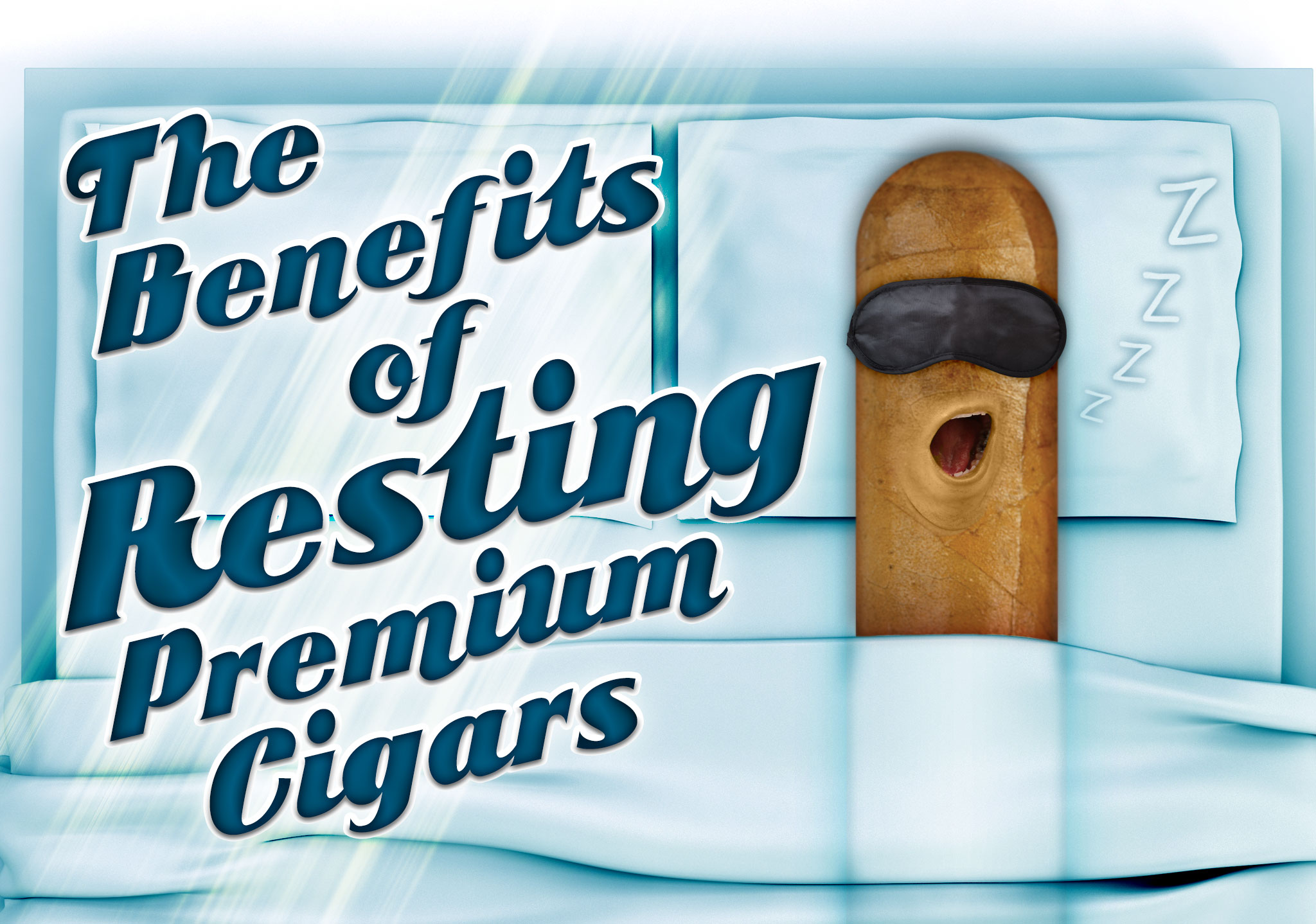 The Benefits of Resting Premium Cigars

You’re standing outside your house talking to your neighbor about the weather, or some other mundane subject. Over his shoulder you spy a big brown delivery truck rounding the corner of your street. The truck pulls up to your driveway and the driver hands you a box addressed from your favorite online cigar store. “They’re here!” you exclaim. You bid a casual farewell to your neighbor and take the box into the house. Out comes the box cutter, and your treasure peeks out from under the packing materials. Off comes the cellophane. You open the box and that sweet, mouthwatering cedar smell emerges. You pluck a cigar from the top row. Your eyes widen, the anticipation grows, and you begin to remove the cigar from its cello. STOP! Not so fast!

Sorry for the fumas interruptus, but you may want to hold-off before clasping your cutter blades around the cap of that cigar. “Why?” you ask. Let me put it this way: if the only cigars you have available are in the box you just opened, and you just HAVE to have one, sure, satisfy your craving and light up. Otherwise, place the cigars in your humidor, or whatever storage unit you use to keep your stash fresh, and let them rest-up from their journey for a few days.

The thing is, when you buy cigars online, the shipping times can vary from one day to one week. The time of year may also have an effect on them, so the conditions the box experienced along the way could have caused the contents to dry out a little, or be a little on the spongy side. You’d think that with all that insulation in the shipping box, the cigars would remain in their warehouse state, but not all warehouses are alike, nor do they all maintain ideal conditions. Suffice it to say, the packages ship in whatever conditions they were stocked. Therefore, by allowing your cigars to rest, or “settle,” they will adjust to the conditions of your humidor, which we will assume is set up just the way you like it.

At this point, let’s be clear about something. Resting is not the same as aging cigars; that is, unless you intend to age your cigars before smoking them, in which case we’re talking anywhere from thee months and beyond. Depending on the condition the sticks are in when you receive them, resting premium cigars should take anywhere from one day to three days. Even if you did smoke the first one right out of the box when they were delivered, then you should notice a slight improvement a few days later. This may or may not be the case. Here, like the flavors cited in cigar reviews or ads, it’s entirely subjective.

Speaking for myself, when I buy a box or bundle of “everyday cigars,” or even pricier singles, I wait at least a day or two before smoking them. The reason for this is, the sticks tend to be a little too moist for me right out of the humidor. And since it takes me about a month to go through a bundle, I notice the flavor of each cigar  – even for value-priced sticks – tends to improve during that time period. If it works for them, you can imagine how well the best cigars will improve.

On the other hand, the travel time from the online cigar store to your shipping address may actually help the cigars settle on their own. Either way, you’re not going to smoke the entire order in one day, so even if you toke-up immediately, there’s going to be some time between that first cigar and the next one from that order. You should notice a slight improvement in flavor, burn, aroma, and other components, or all of the above.

Recently, I smoked a new cigar on the market that blew me away. A lot of people were raving about it and it lived up to the hype. It was a little too peppery for me, but not overwhelmingly so. When I shared my impression of it with a friend, he told me he noticed the same thing, but after only a couple of weeks in his humidor, the peppery notes were almost nonexistent. To test his theory, I purchased another one the following day. (At the time of this writing, it’s only been in my humidor for a couple of days, so the jury is still out.)

Although I’m a firm believer in letting fresh cigars rest for a day or two before smoking – even if you leave them in their factory box –  I look at resting cigars like the old chicken soup joke: Mrs. Schwartz, grieving during the burial for her late husband, turns to the clergyman officiating the service and says, “Give him some chicken soup!”

“I’m sorry Mrs. Schwartz, but that wouldn’t help,” he replied.

And so it goes for resting your cigars. Whether you rest them or not before taking that first savory puff, letting them lie still for a short time period after they arrive, can’t hurt them. If anything, they will be that much better.

[…] it comes to the enjoyment of a premium cigar, the little things that you do before you light it can make all the difference to the taste. Not […]

[…] really Jones’n for a cigar the moment the box hits your doorstep, I’ve found that cigars tend to smoke and burn much better when given at least a week to rest after leaving the ware…, even if the vendor’s warehouse or humidor is kept at optimum conditions. Though it’s […]

Reply
The Benefits Of Resting Cigars?

[…] for best usage later on. This article provides a comprehensive overview of the benefits of resting cigars. A properly set up humidor in your home is one of the most important parts of having a great cigar […]

[…] for a period? A few of my mates are in disagreement.” Great question, Benji. Whether you should let your cigar rest can vary depending on conditions. Check out my video for a full […]

Reading Time: 7 minutes Remember when shoulder pads and mullets were cool? Yeah, trends are great short term, but the Nicaraguan cigar trend is going to last and here’s why. While Nicaragua has been producing some of the finest tobaccos in the world since the 1960’s, it’s been on a naming kick lately. In just the last 5 years, over 25 new cigars were released with ‘Nicaragua’ or ‘Esteli’ in their names alone. So how do we navigate the waters of this rising trend?