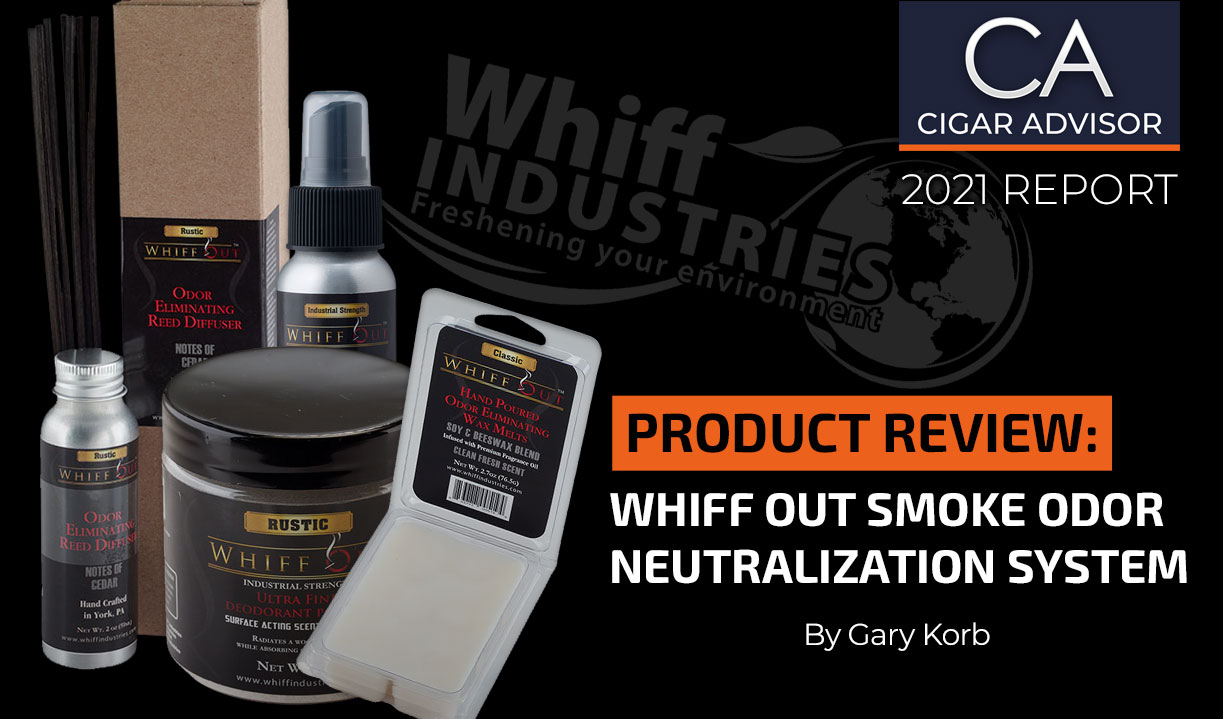 STENCH. A problem humanity has dealt with since time immemorial. Sometimes I think that America is the most odor–obsessed country on earth. Just watch half the TV commercials running at any given time. There’s an odor solution for just about everything. Kitchen smells, car smells, clothing smells, and of course, the ever popular bathroom smells.

With the discovery of tobacco and the application of fire to it, a new odor arose – smoke. Rolled into cigars, tobacco emits a heavy fragrance all its own. It can be sweet, spicy, burly, or all of those things at once. If you partake of the tobacco leaf, it’s like a walk through a botanical garden. But not everyone thinks so, even some cigar smokers. The aroma while the cigar is burning is one thing; the problem is the remnants of cigar smoke, that rancid funk that clings to just about everything it touches.

In an effort to keep cigar smoking environs odor free, a number of companies have come up with myriad solutions to the problem. One of them is Whiff Industries, makers of Whiff Out brand products, who have developed an odor neutralizing “system” of their own. 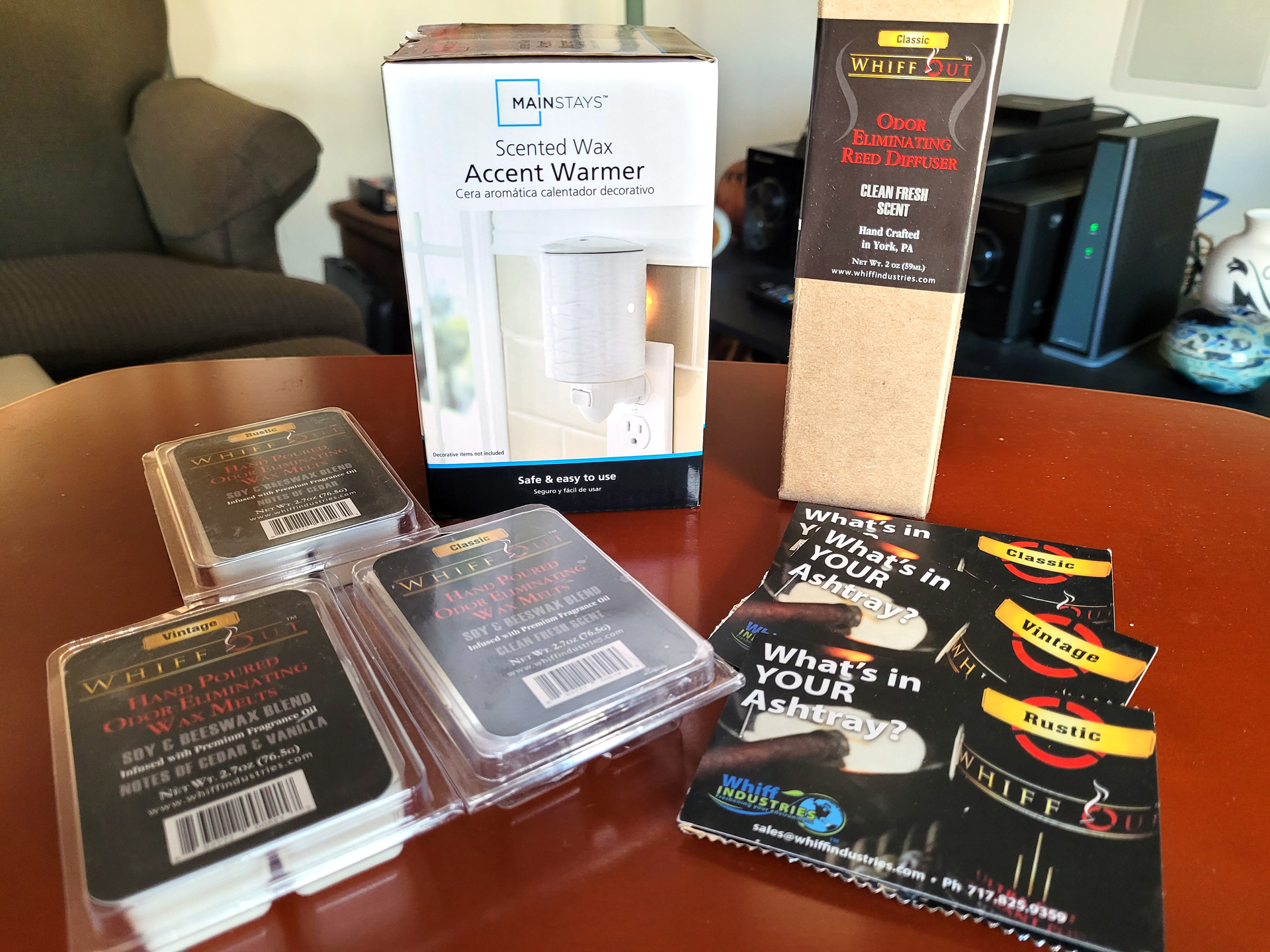 Since I sometimes smoke in my house, I’m always looking for something that will keep my smoking area from smelling like a giant ashtray.  So, for this article, I decided to test their “Smoke Odor Neutralization System.”

Full disclosure: the Whiff Out samples for this product review were provided by the manufacturer. Thank you to Whiff Industries Director of Sales, Marketing, and R&D, Holly Howard, for supplying them, along with additional information.

Who is Whiff Industries?

Based in York, Pennsylvania, Whiff Industries, like many American success stories, started with the question: Can we create an affordable household deodorizing powder using only natural ingredients? The answer? Yes.

In 1960 the company launched its first product—Ultra Pure. Ultra Pure was a multi-purpose non-caking deodorizing powder with a clean fresh scent. The product’s formula also became the foundation for many of Whiff Out’s product lines they sell today.

A decade later, the company created Dumpster Breath, an environmentally safe, industrial-strength product for deodorizing outdoor refuse containers. If you’ve ever walked past a bulging restaurant dumpster on a hot summer day, you know that had to be a challenge.

In the 1990s, Whiff Industries was asked to create a private label carpet powder. This led to offering custom scented deodorizing powders using only pure natural ingredients. And so, more products and applications followed, including the challenge of neutralizing cigarette and cigar smoke odors.

All Whiff Out products are manufactured in the U.S.A., and their environmentally-friendly consciousness has incorporated recycled materials into their packaging whenever possible. Moreover, the company converted their plant’s power source to 100% wind energy.

What is the Whiff Out “Smoke Odor Neutralization System?”

The Whiff Out Smoke Odor Neutralization System is comprised of four stages that work with the following four products:

Each of the products can be used individually for a number of different uses. They also come in a choice of fragrances noted above and are mostly “cedar” in fragrance.

To effectively neutralize smoke odor, Whiff Out says the system should be used as follows:

STAGE 1: The Reed Diffuser emits a continuous fragrance, but it’s subtle enough to not interfere with the nuances from the cigar’s aroma. Just set it up and let it do its thing 24/7. Reeds can be turned over as necessary, and will last about 90 days. Place the diffuser in the area where you’ll be smoking. 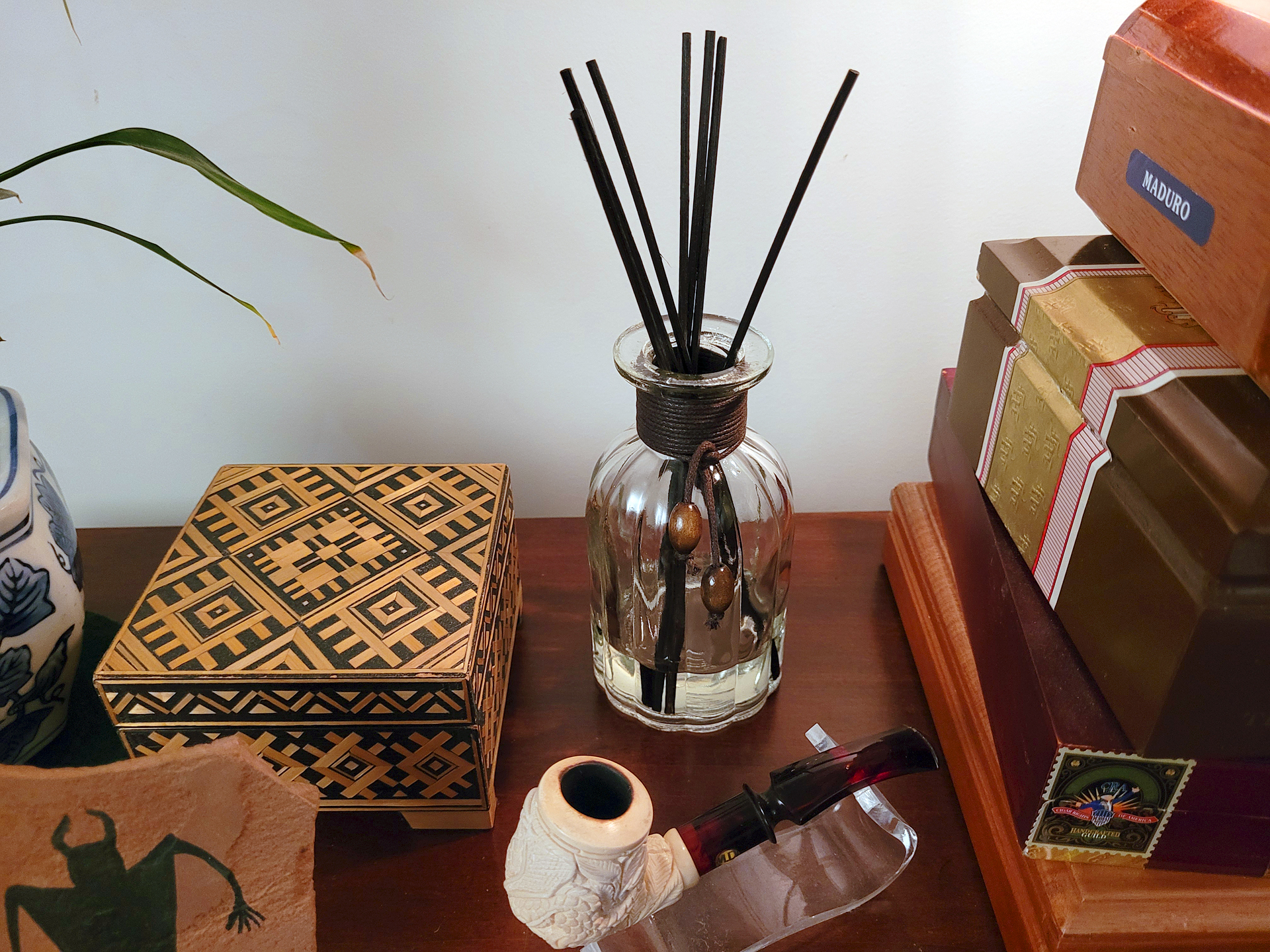 STAGE 2:  The Crystalline Ashtray Deodorizer was designed to alleviate stale ashtray aroma. Simply place a small amount of the fragrant powder in the ashtray, and it instantly kills the odor of the ashes once they hit it.  A little goes a long way- and the company suggests a quarter–size amount for starters. You can continue to build from there depending on scent level of preference and number of cigars being smoked. Add the powder to an ashtray before you prep your cigar. 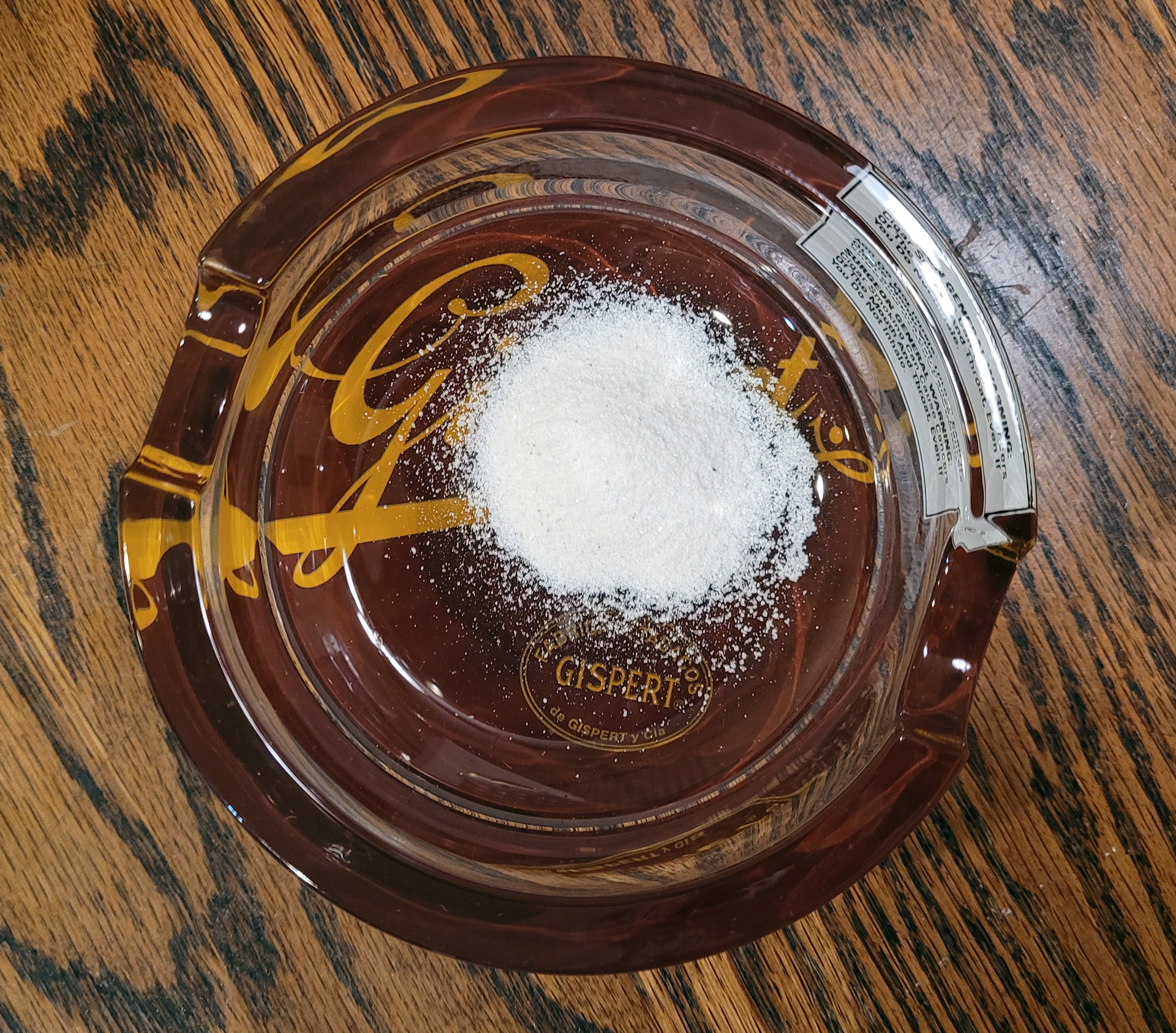 STAGE 3: Made from soy and beeswax, the dye-free Wax Melts are meant to neutralize stale aromas in the air after you’ve put your cigar out to neutralize and cleanse the air. The company recommends the wax be melted in 20-minute sessions for up to one-hour total. So, each cube can be used three times before tossing. 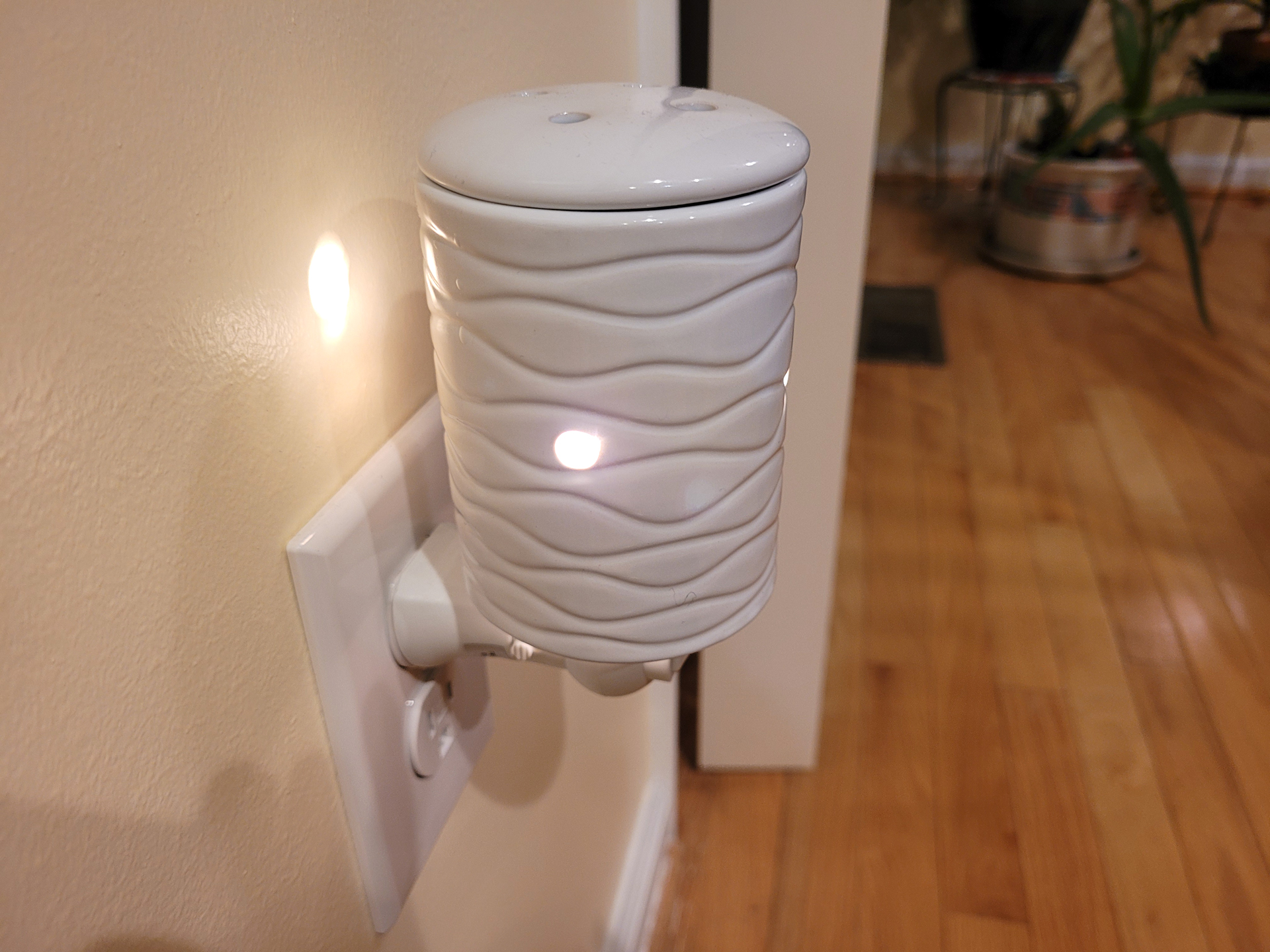 STAGE 4: Whiff Out Spray Mist odor eliminator is non aerosol, non-oil based, and colorless. In addition to being used in the air, it can also be used on clothing, upholstery, drapes, etc., including fine linens, carpets, and in your car. Use the mist after your session to give your smoking space a final coat of neutralization.

If used according to the directions, your smoking room should return to normal, or at least, all you’ll smell is the reed diffuser.

Now it was my turn to try the Whiff Out Smoke Odor Neutralization System for myself. Holly sent me diffusers, wax, a wax warmer (not included with the wax), and the crystalline powder in every fragrance, plus a small sample of the spray.

Following their directions, I tested all of the Whiff Out products over a three-month period, and what follows are my observations.

I placed the reed diffuser in the room where I would be smoking. The diffuser put out plenty of scent, and I could smell it as soon as I came into the house. So, as far as that was concerned the diffuser was working full time, and I liked the aroma. Effectiveness-wise, it did a pretty good job at keeping the air smelling clean before and after smoking. (The “Classic” scent appeared to have the most noticeable effect.)

I was skeptical about the powder. You have this little spot of powder sitting in the ashtray, yet the smoke from your cigar is going all over the place. So, what’s the deal? It took me a little while to figure that out.

They don’t recommend placing your cigar over the ashtray with the powder. I didn’t know that at first, but that’s also how I learned how the powder works. With my cigar resting over the powder, I noticed that the smoke coming off the cigar had no aroma. I wrote to Holly asking her about this:

“It is true,” wrote Holly. “The revolutionary crystalline ashtray deodorizer naturally deodorizes with its surface acting scent technology while then emitting a light, pleasant aroma.  The primary use is for ashtrays, home or in vehicles for a smoker to ash their smoke of preference in without immediate clean up.”

So, the Crystalline Ashtray Deodorizer powder is similar to potpourri, and its aroma actually carries pretty far. That a second ashtray or resting base was necessary to rest your cigar seemed a bit of an inconvenience. Otherwise, as an invisible suction hose for ash odor, it appears to do the job. It also lasts a long time.

The Wax Melts were just okay for me. They smelled pretty good—the “Classic” had a very intense, spicy-flowery aroma—but I wish they lasted for more than an hour.  I also placed the warmer in the kitchen, primarily to spread out the products, because smoke also travels in there. Plus, I wanted to see how it handled kitchen odors. As for using it as a stage in the system, it played its part well.

The Whiff Out Spray Mist is probably the most effective in the lot. It’s super concentrated and the mist is very fine. It has a profoundly spicy-flowery aroma and a fair amount of density to it. It’s great for putting the final kibosh on any lingering smoke odor, and you don’t need much, either. The other nice thing is that you can use it like any other odor eliminator spray you would buy at the local supermarket for other household odors.

Does a cure-all for neutralizing smoke odor really exist?

When it comes to odors, especially odors from cigar smoke, I doubt any one particular product, or collection of products will stifle them 99.9%. And Whiff Out doesn’t make that promise. Yet, I wouldn’t be surprised if the System could possibly neutralize enough smoke to prevent a good portion of the odor from collecting over time. Believe me, until we began working from home and our Advisor offices had a chance to be cleaned and painted, the walls on which the smoke residue clung to reeked for years.

The topic doesn’t often come up in conversation, but most cigar smokers want to keep their smoking spaces smelling clean. I get questions about what’s good for cleaning stanky cigar air fairly regularly. And for that matter, if you plan on creating your own personal smoking space, I highly recommend you start with some kind of fan or filter to catch the bulk of the stank. Then, there’s Whiff Out. . .

From my observation, the Whiff Out Smoke Odor Neutralization System had a positive impact on controlling smoke odor in my limited space. And even if the products are used individually, if nothing else, the Whiff Out line is capable of neutralizing smoke to some degree. On top of that, their products are affordable and appear to offer long life. If you think they’ll work for your particular situation, they’re certainly worth checking out.

Hi Mike –
Thanks for the comment. Yes, they do work, but it really depends on your particular situation; room size, number of cigars being smoked at once, other means of filtration, etc.
G-~

Is it ok to use around pets?

Yes. All of the Whiff Out products are made with natural ingredients and non-toxic.
G-~

White vinegar in bowls – you are welcome ;)

Sounds like these may be a way to enhance the white vinegar! The company is like 15 minutes from my house and I never knew they were there :) I should stop in and say Gary sent me LOL I may have to snag some to try. I am most interested in the powder for in my Stinky ashtray and my car bobkin!

Sounds good Mike. Sure, mention my name. (ha ha) Not sure what you’re referring to with the white vinegar, but I thought the powder was the most interesting of the products. Plus, I have heard that the powder works very well in cars from several people in our retail store. Good luck. G-~