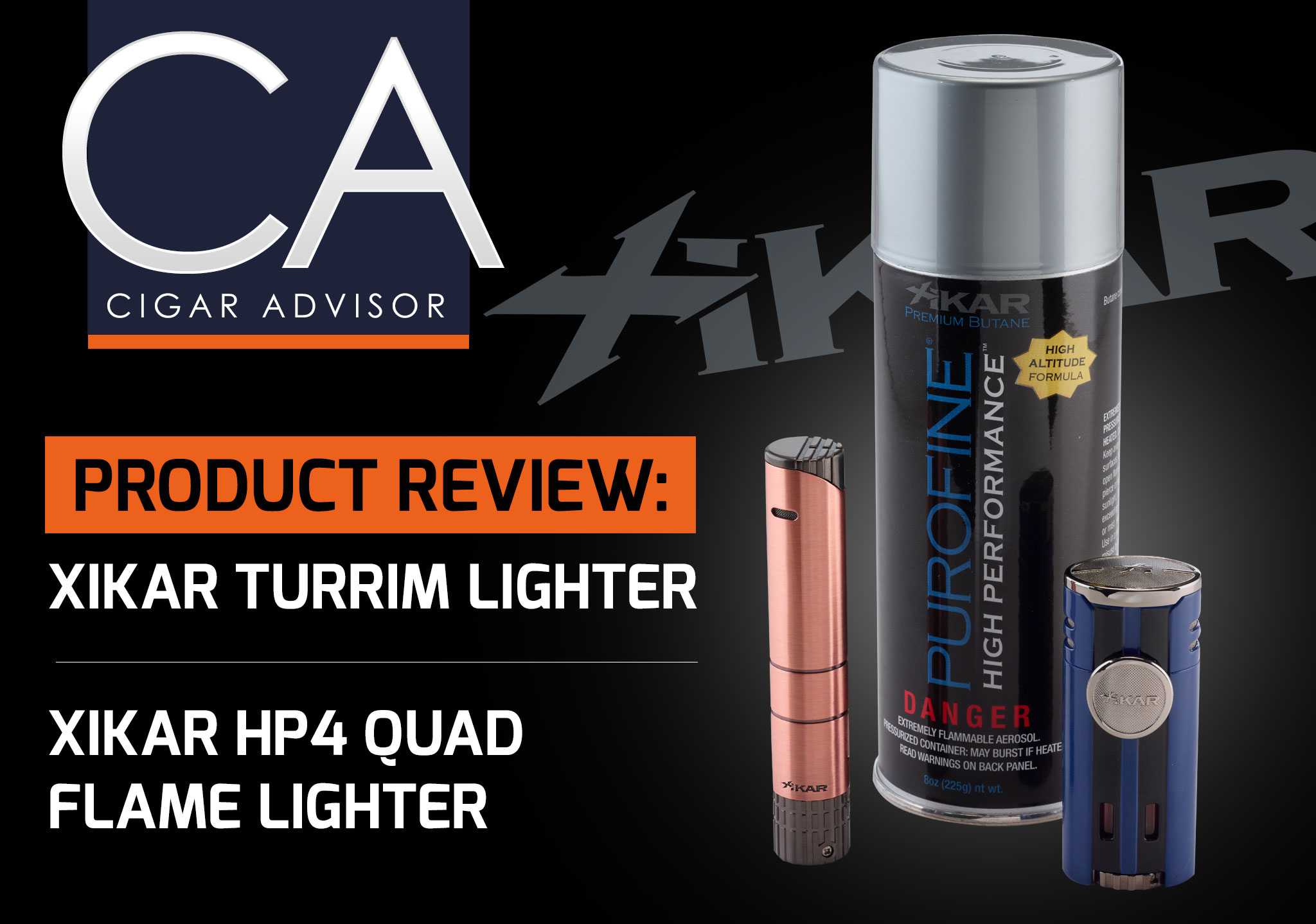 Today, Cigar Advisor Executive Editor Gary Korb takes a look at three new cigar accessories from Xikar, Inc. Two new Xikar cigar lighters, the Turrim Single Flame and HP4 Quad Flame lighters are reviewed, plus the new ultra-refined Xikar PuroFine Butane. If you’re in the market for a new cigar lighter, or want to improve the performance of the lighters you already own, check out these reviews…

Why is it that when it comes to innovation in cigar accessories, Xikar, Inc. seems to move at the speed of light, while others move at the speed of sound. (I sometimes wonder if anybody will ever catch them.) Case in point: Two new Xikar cigar lighters that are designed to make lighting your favorite primos a joy – the Xikar Turrim™ Single Flame and Xikar HP4™ Quad Flame – plus, a new PuroFine® High Performance butane lighter fuel that promises to deliver more powerful flames. I recently had the chance to take these three new items for a test-drive, and here’s how they panned-out. . .

The first thing you notice about the Turrim Single Flame Xikar lighter is its elegantly sleek body style that bears resemblance to a cigar. Speaking of which, its 4½-inch by 50 ring dimensions allow you to neatly place it into a cigar travel case slot when you’re on the road. If you’re familiar with the Xikar Volta Quad table lighter or the Xikar “564” Turrim double flame lighter, the Turrim Single Flame works in very much the same way with an easy ratcheting fuel adjustment wheel at the base and an ergonomically designed ignition button. Other features include an elongated fuel tank for maximum fuel capacity so you don’t have to refill the lighter as often, plus Xikar’s EZ-View™ red fuel window that makes it easy for you to instantly see how much fuel is in the tank.

The sample model I used was the “Vintage Bronze,” which has more of a copper-like patina, giving this lighter an eye-catching appearance. Other available colors include silver, “G2” gunmetal, and black.

At full-bore, the blue, laser-like flame rises to just over an inch, yet provides plenty of heat even at about half that height. I found the Xikar Turrim Single Flame great for toasting my cigars. The thin flame allows you to toast around the rim of the foot with pinpoint accuracy bonding the wrapper to the binder for a more even light. Although the Turrim is capable of lighting any size cigar, it’s best suited for smaller ring gauges ranging from cigarillos to 44-ring Lonsdales, especially if you’re the type who likes to light-up quickly. I also found that if you toast your cigar in a circular fashion, winding from the center of the foot out to the edge, it offers a very even light on cigars from 48 to 54 ring.

What I like most about the Turrim is how convenient it is, especially for enjoying your cigars away from home. It’s well-built and small enough to fit in your pocket; sleek enough to store in any style cigar travel case; powerful enough to light any cigar in a pinch; it has a deep fuel capacity, and it’s attractive enough to add a note of refinement to your stable of accessories.

The “HP” in the name of this new Xikar lighter stands for “High Performance,” and according to the company was “engineered to deliver optimum performance and output,” like the high performance supercars that inspired its overall design. Even the color pattern includes debossed racing stripes on the front. My sample was the blue model with black stripes, but it’s also available in red, “G2” gunmetal, orange and black.

The Xikar HP4 Quad Flame offers some of the same features found in the Turrim above; in this case, twin EZ-View™ red fuel windows and an inline oversized fuel adjustment wheel so you can quickly tune the flame height. Where it really differs starts with its “Diamond Quad Jet Flame” that directs all four flames at an eight-degree angle to form an ultra-powerful apex at 3/4 to full-bore flame height. And because the flame is more concentrated, the HP4 Quad can handle cigars of any size, even 70 and 80 ring-gauge giants. And take it easy when you fire this baby up, because it lights even those big guns almost in an instant.

To operate the lighter, you flip-up the cap manually, then press the textured ignition button. One nice feature about the cap is that it tilts back a full 90-degrees giving you plenty of room to get an unobstructed light regardless of what size cigar you’re smoking, and the ribbed rubber backing pad gives you a much better grip overall. Additionally, the Xikar HP4 Quad Flame’s size and weight allow it to double as a “table lighter” when it’s not in your pocket or cigar travel case.

As with all Xikar cigar lighters, both the Xikar Turrim Single Flame and Xikar HP4 Quad Flame cigar lighters come with Xikar’s “Guaranteed for Life” warranty.

When it comes to having the right fuel for your torch lighter, the more refined the better. Enter Xikar’s PuroFine High Performance Butane that was also developed for cigar smokers who live at higher altitudes where there is a lower oxygen content.

So, how they did they do it? Xikar formulated this high performance PuroFine butane at less than 15 parts-per-million impurities, which does other things besides ensure you can easily light your cigar at the top of Prospect Mountain in Estes Park, Colorado, or more specifically, at roughly 7,500 feet above sea level. This ultra-refined butane also fills your lighter faster, prevents burner valves from clogging, and at more down-to-earth altitudes will turn weak flames into stronger and taller flames. I tried this myself on an old lighter with a low flame and there was a definite improvement in height and performance. Suffice it to say, that using Xikar PuroFine High Performance Butane should result in fewer lighter problems, while extending the life of your Xikar cigar lighters and others.

Turrim™, HP4™, and EZ-View™ are trademarks of Xikar, Inc.

PuroFine® is a registered trademark of Xikar, Inc.

Reading Time: 5 minutes Gary fires up a classic: Joya de Nicaragua Antaño 1970 Consul. This perfectly-aged, all-Nicaraguan blend recaptured everything great about the best-selling original JDN blend from the 1970s, and helped set the bar for bold cigars in the new millennium. But do these puros still hold up to today’s full-bodied standards? Watch & see…