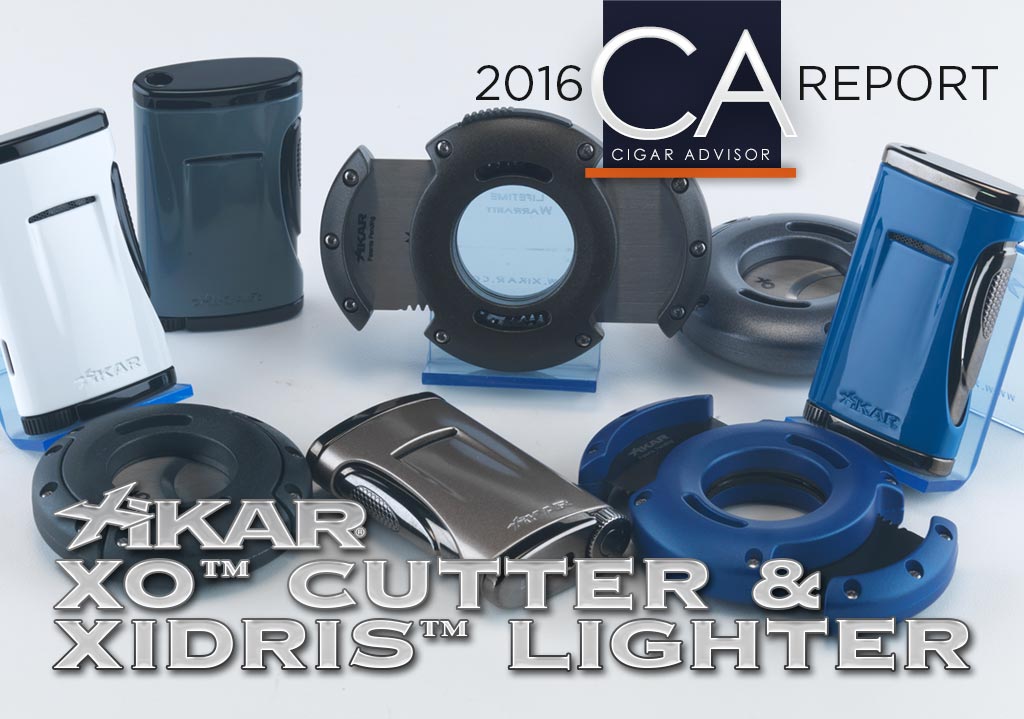 Once again, I’ve been assigned the enviable task of reviewing a couple of new cigar accessories from the inventive minds at Xikar, Inc. First up is their new circular-shaped Xikar XO™ double guillotine cigar cutter, followed by their new Xidris™ single flame cigar lighter that comes with state-of-the-art technology and many other nice features.

When I first saw the Xikar XO cutter in Xikar’s monthly newsletter, I thought, “Now that’s cool…” A circular-shaped cigar cutter – who’da thunk it, right? Well, it seems that the Xikar engineers are great at looking at the world from outside the box, or in this case, outside the circle.

According to the company, the dual stainless steel blades, which are every bit as hard and sharp as their famous Xi Series cigar cutters, “operate on a patent pending planetary gear system, ensuring the blades open and close in perfect harmony, providing a guided and clean cut every time.”  The aluminum body is incredibly durable and keeps it from being too heavy. I liked the compact size of the cutter, and the blade aperture will handle cigars up to a 64 ring. 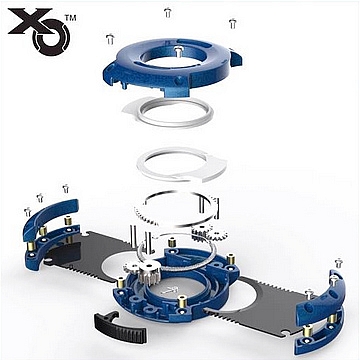 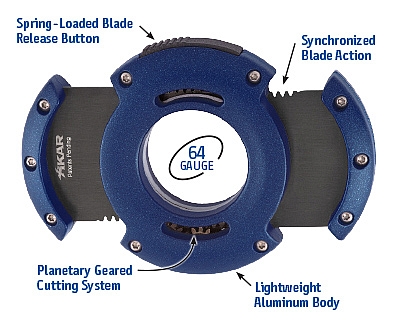 The cutter itself is neat to look at, too. Two openings in the cutter allow you to peek-in at the gear system, which reminds me of something from the movie Hugo. The “gear train,” as Xikar calls it, is designed to evenly distribute power to the blades, while the primary “sun gear” rotates around the cutter opening delivering spring force to the blade gears. I guess that also explains why they call it a “planetary” gear system.

Performance-wise, the XO cutter opens instantly with that familiar Xikar CLACK!, and because the opening is so wide, you can get a really good bead on exactly where you want to cut. The blade release button has a rumble strip on it for a better grip, and makes it easy to open by feel.

Speaking of feel, holding the cutter takes some getting used-to at first, but after a few cuts, it’s no different than most other double guillotine cutters. You don’t have to use two fingers to close the blades, either. The XO was designed so that you need only apply pressure to one blade. Moreover, on a recent visit to our offices, Xikar prez Kurt Van Keppel, showed me how to work the XO cutter with one hand, but I still haven’t gotten the hang of it. In any event, it works really well, and I’ve gotten so used to using the XO, I haven’t touched my old Xikar Xi cutter in weeks.

All-in-all, the Xikar XO cigar cutter is a real gem of cigar accessory, especially if 1) you need an extra wide opening for large-ring cigars, 2) you want plenty of power for more precise cuts, and finally, if you want a cigar cutter that doubles as a neat conversation piece.

I’m not one of those cigar smokers who has a massive collection of cigar lighters, but I’ve had my share over the years. One of the more common issues among all cigar lighters is that they don’t always light when you depress the ignition. Usually one or two tries will get it going, and most cigar smokers are used to this. There are actually a couple of reasons why this happens; from having a dirty spark element, to not slowly depressing the ignition to allow the gas to flow first, to a lighter that’s dying on you. So, what if you could own a cigar lighter that fired every time you lit-up? 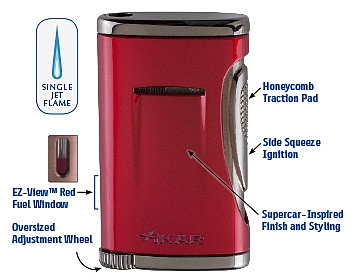 It works basically like this: Instead of the gas going through a maze of tubes, the guts are designed to bring the gas directly to the spark – and it really works. The lighter has an attractively sleek design, a smooth, glossy, hard enamel-like paint job, and a nice heft to it that tells you it’s solidly put together.

Some of Xidris’s other redeeming features include Xikar’s EZ-View™ red fuel window that lets you know how much fuel you’ve got left at any given time without having to squint. When full, it’s all red in color; when empty, it’s clear. The fuel adjustment is an oversized wheel that’s easy to reach and manipulate, and an auto-lid mechanism keeps the flame opening closed until you’re ready to light-up. This helps protect the burner from debris when the lighter is not in use. Ignition comes by way of a comfy side-squeeze ignition button that runs almost the entire length of the lighter.

Xikar also added some nice little details, like a honeycomb traction pad on the ignition button, and vented “hood” scoops that help keep the windproof flame at optimum performance. Another nice extra built into the ignition system is the “safety-tilt” feature that prevents the lighter from igniting while upside-down. One other little nicety that I noticed was, the top of the lighter acts like a mirror, so you can see your cigar as you’re lighting it. I’ve been using the Glacier White model, which has a black top, and even that’s shiny enough to see my cigar.

I’ve been using the lighter along with the cutter on a daily basis since they arrived about a month ago, and I’ve had no issues whatsoever with either accessory. Of course, even if I do have a problem down the road, both accessories are covered by Xikar’s lifetime warranty.

If you’re in the market for a new lighter and/or cutter, or want to drop a hint for this year’s Holiday season gifts, these new cigar accessories from Xikar deliver on their promises. For more information on The Xikar XO cigar cutter and Xikar XIDRIS™ cigar lighter, visit Xikar online.