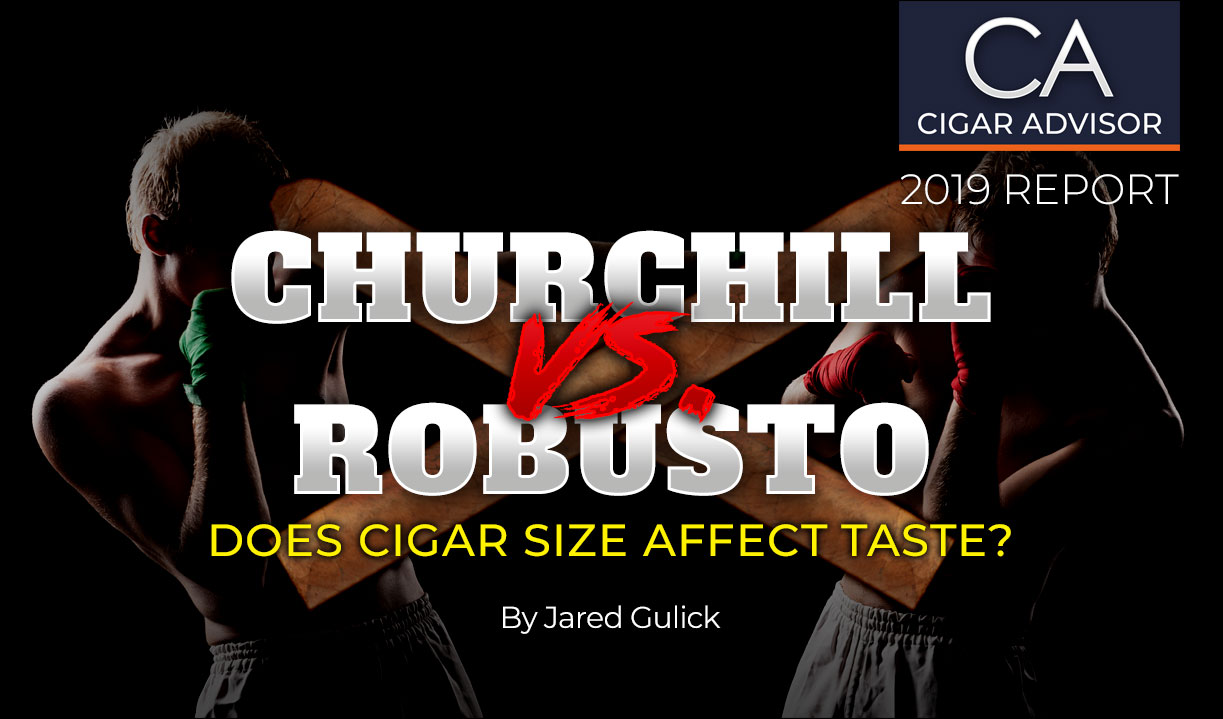 If you’re just getting started smoking, you may be looking at all the different options and asking, “Which cigar size is right for me?” Eventually, that answer will come from variables like the amount of time you have to smoke and personal preference. You’ll likely find reasons to smoke an array of sizes (also called vitolas) depending on the occasion. We’ll start with the two extremes of the most popular cigar sizes: Robusto and Churchill.

What is a Robusto?

Arguably, Robustos are the most popular cigar size of all time. It’s generally one of the more economically priced selections of any blend and lasts about 45 minutes to an hour. Most come in 5” x 50 dimensions, but it’s worth noting that there’s no standardization of sizes, or even names. For example, Romeo y Julieta calls one of their Robustos Bully. Another is the Diamond Crown Julius Caesar Robusto. It has dimensions of 4 ¾” x 52. Despite the lack of convention, most manufacturers stay in the ballpark.

What is a Churchill?

Churchills are longer cigars, usually measuring 7” x 48-50. That extra length gives the cigar an additional 30-60 minutes in burn time, so expect one to last anywhere from 90 minutes to two hours. They aren’t as popular as Robustos due to their size, and higher price, but some enthusiasts prefer a longer-lasting smoke.

What are the Differences Between These Cigar Sizes?

We’ve already established that price and smoking time are factors, but there are others that aren’t as often considered. Here are a few:

Nicotine is a byproduct of tobacco, and simply, the larger the cigar you smoke, the more it will contain. This is important if you’re a beginner, because if you’re not used to these effects, it’s much easier to get nicotine poisoning from a bigger stick. And even though that sounds scary, it’s relatively harmless and easy to fix. Just keep it in mind.

Regarding the length of the leaf (also called a priming), the length of the cigar matters. Smaller cigars call for smaller leaves, and there may be some differences in taste between shorter and longer primings. Blenders work to make sure that they all have consistency in taste. As your palate develops, you’ll be able to pick out nuances among them and gauge which ones you prefer.

As for complexity, there are two schools of thought. The first is how many different flavors you can taste in a single cigar. The second, and the one I ascribe to, is how many changes a cigar goes through when you smoke it. The longer a cigar’s length, the more opportunity it has to evolve. It may not happen with every cigar, but the possibility is certainly increased with larger vitolas.

Below, I’ve taken five popular blends and detailed the differences between their Robusto and Churchill sizes.

Arturo Fuente is well-known for its consistency in the blending room, and to my palate, there aren’t many differences between these two. Both have ample helpings of fruit, savory spices, and a sweet disposition. The Double Chateau makes you feel it a bit more toward the end, but that’s most likely due to the extra inches of tobacco. The takeaway for you is that your session will remain the same no matter which vitola you choose.

Perdomo Lot 23 Connecticut is a staple for many smokers for two key reasons: modest pricing and medium-bodied appeal. Both go great with a morning cup of joe, and offer ample notes of toast, butter, nuts, and sweet spices. Going from Robusto to Churchill is more noticeable here, but I wouldn’t call the disparity stark. The Churchill format seems spicier to me, and it’s a pattern I’ve noticed with most of their cigars.

I have a belief that if you’ve never smoked a Serie G, you’ve bypassed a true classic. From the aromatic plume of smoke, to its saliva-inducing trifecta of cedar, nuts, and coffee, G just shines. And it does so even more on its smaller-scale cigars. For some reason, the Robusto’s flavor just has more pop, like a single colorful item in an otherwise black and white photo. Maybe it’s the way they bunch their tobacco…maybe it’s something else entirely. Give both a burn and see if you agree.

Ah, the Romeo y Julieta 1875. Another first-timers smoke, especially for those who don’t want an excessively sweet introduction to cigars. It has undertones of leather and earth with some tangier notes on the finish. The Bully isn’t very complex to my definition above, but the Churchill goes through some significant changes in the final act – mellowing and revealing an influence of cedar, hay, and butter. That extra two inches offers a lot more to appreciate.

If you aren’t as wet behind the ears, the bolder approach of Rocky Patel’s Cuban Blend is my addition for you. The line is a Famous-exclusive and boasts spicier tones that are tailor made for more advanced palates. Finishing sweet with its Corojo wrapper, you’ll pick up dashes of citrusy zest, floral notes on the retrohale, and a big hit of pepper with each puff. Cuban Blend’s Double Corona size stretches 7 and a half inches and packs much more flavor than the Robusto to my taste buds. It also smokes a lot cooler since there’s a decent amount of distance for the smoke to travel through. Something to think about the next time you’re shopping…

There you have it. The differences are sometimes small, and others, vast. Ultimately, it’s up to you to judge for yourself. Hopefully, this gave you a starting point. Let us know what differences you picked up on between Robustos and Churchills in the comments below!

Reading Time: 4 minutes HVC Cigars and Aganorsa Leaf are two of the HOTTEST boutique cigar companies in the business; the Advisors saw what happened when they’re combined, in this HVC Serie A cigar review. Click now and get the skinny on this Nicaraguan puro!

5 Things You Need to Know About… Mexican San Andres Wrapper