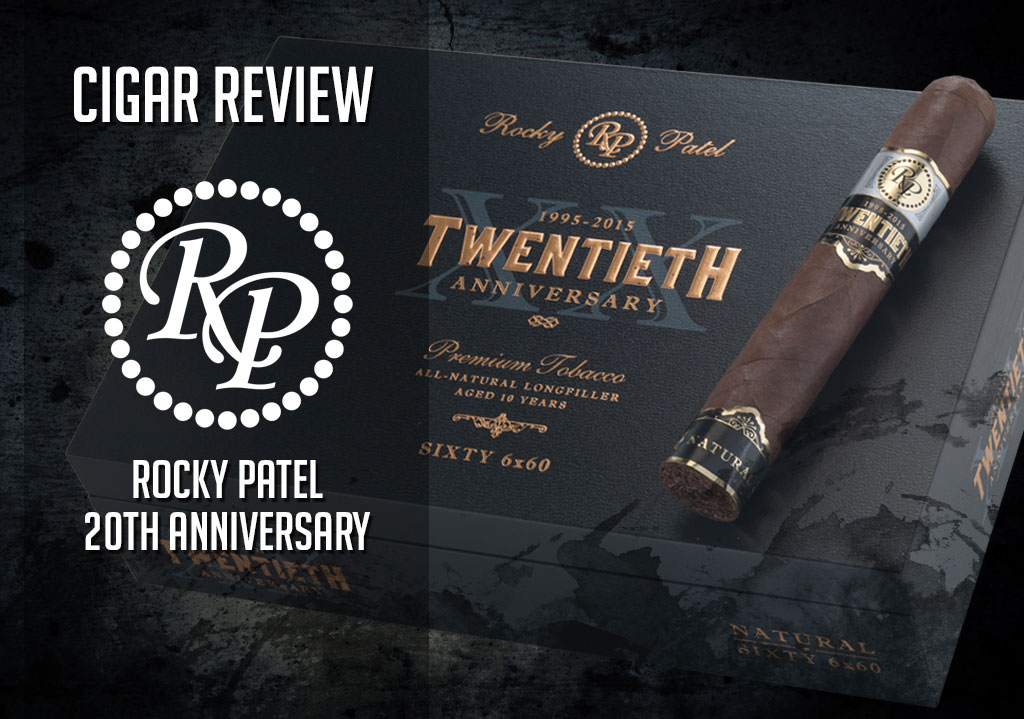 The table is set, the torches are full and the cutters are sharp…and the Advisors have, once again, taken their places to smoke for the sake of quality assurance. Anniversaries are a big deal; and if you’re Rocky Patel, this year marks your 20th in the cigar biz. So in true Rocky fashion, he’s released a commemorative cigar for the occasion: the 20th Anniversary, and on the surface it looks like a beaut’. But you can’t always judge a book by its cover – so for this Rocky Patel Twentieth Anniversary cigar review, it gets the full video panel treatment. Known for his rich, full-bodied powerhouse smokes, one would expect RP’s newer releases to fall in line; and a look at the blend isn’t particularly revealing, as he’s kept his recipe close to the vest. The wrapper is simply, “Honduran.” The binder, too, is only described as “Honduran.” The core is a more diverse, with long fillers hailing from two regions of Nicaragua and the Jamastran Valley of Honduras. Intriguing. As of now, the Rocky Patel Twentieth Anniversary is available in five vitolas, ranging from a 4 1/2 x 50 Rothschild all the way up to a big bonkin’ 6×60 Double Toro. We’re splitting the difference today, with the 6×52 box-pressed Toro in our sights; watch the video review for our impressions and some not-so-fancy cigar talk, or get the background on it by jumping to each Advisor’s tasting notes first (below). As always, no scores or numbers at Cigar Advisor – we just think you should know what qualities we’ve found in Rocky’s cigar, and whether we you’ll like it. We inspect all the angles and call ’em as we see ’em: watch our Rocky Patel Twentieth Anniversary cigar review video now!

Construction and Overall Appearance: Excellent construction – this is quite possibly one of the silkiest wrappers I’ve ever seen. I’m guessing it’s sun grown (most Honduran tobaccos are) and is a little bit thicker, and a bit tougher to keep lit.

Toasting & Light: Huge rips of smoke right off the bat – and some flavors that pop right through from the start.

Base flavors: Citrus, naturally sweet tobacco, some chocolate/dark coffee (or cocoa) with only the slightest bit of spice.

Retrohale: I did not.

Aroma: Not a lot – but what there was, very pleasing.

Burn / Ash Quality: Char line was dead-on nuts for the first half of the smoke.

Balance of flavors: What a wild ride…super complex, with a constant switch up of flavors as it progressed.

Consistency: I noticed these flavors and changes in both cigars.

Cigar lost some of its creaminess by the second half; because the wrapper is a little thicker, it was having a hard time keeping up with the binder/filler. Solid medium body smoking experience.

We haven’t had the chance to cover one of RP’s smokes on tape in quite a while – so the chance for us to do a Rocky Patel Twentieth Anniversary cigar review was good timing, and I think worth the wait. First half of this smoke was rich with a tangy taste, a nice citrus that was really thick and dark. Excellent smoke output, and insanely flavorful right off the bat; I’m betting this is a sun grown wrapper, with all that extra tanginess…most Honduran tobacco is sun grown, so not unexpected; what was surprising was just how much of that flavor was in there. The filler just heaps even more on top: natural sweetness, and eventually some dark and roasty flavors that were very espresso-like. This was really a good showcase of how flavorful and smooth Honduran tobacco can be, if you’ve never really been exposed to a lot of it. Dark citrus flavors abound with just a touch of spice, firms up at the end – and wrapped in such a nice leaf, I’d say this is one of the most refined cigars Rocky has in his lineup. The RP 20th Anniversary is one I’d easily put in my top 3 Rocky’s, along with Decade and the Vintage ’92 – and the nicest looking of the bunch.

Construction and Overall Appearance: Beautifully pressed inside an attractive, silky smooth and virtually flawless wrapper. No soft spots. Cap is well made. Second band at the base protects the foot.

Aroma: Very appealing. Earthy, a bit sharp, but not bitter.

Burn / Ash Quality: Very good with a thin carbon line. The burn isn’t always perfectly even, but doesn’t canoe. Ash is firm and mostly grey in color with a nice stippling as the cigar burns.

By its appearance, this cigar reminds me of other upmarket Rocky Patel cigars, with its box pressed shape, even, reddish-hued wrapper, and triple cap. The smoke is very “Rocky,” in that, I found it earthy and woody with a layer of sweet spice, a hint of light pepper, some citrus, and decadently creamy.

Overall, the smoke is smooth, and though it went out on me several times (when I was distracted), it stood up well to relighting – a BIG plus in my book. The flavors remained consistent throughout, building only slightly in strength while maintaining an excellent balance, even down to the 1-inch nub I left behind. It reminded me a little of the Rocky Patel Vintage 1992, but with more depth and complexity.

Fans of Rocky’s cigars will not be disappointed, and I can see myself retuning to this cigar. I would recommend it to cigar smokers who like rich, creamy, complex cigars with a medium-full body, and can see this cigar pairing nicely with everything from coffee, which I paired it with, to a fine añejo rum or 12 yr.-aged single malt.

Construction: It’s a sun grown cigar without any of the physical sun grown characteristics. That’s simply astounding. It wasn’t hard, nor did it have any soft spots. Beautifully constructed.

Draw: In the realm of perfect.

First few puffs: Virtually no spice, but busted out of the gate with great flavor.

Retrohale: I choose not to retrohale. It’s just not my thing.

Base flavors: Deep and rich, yet complex. It’s hard to pick a base because it jumps around quite a bit, but gun to my head, I’d have to say either a baker’s chocolate or Espresso. Like I said, real rich. Would go perfect with morning coffee or after dinner espresso.

Aroma: Probably the only downside to this cigar. I feel like it just doesn’t fully complement the cigar. It has a real strong tobacco aroma with not much else. Then again, I was a bit under the weather so my shnoz was all out of whack.

Burn/Ash: Again, for a sun grown wrapper, which encourages burn issues, it was dead on. The quality of the wrapper mixed with the Honduran binder really created an even burn all the way through, creating a nice solid grey ash.

Balance of Flavor: A little off simply because it was a medium bodied smoke with a ton of flavor. But that’s not necessarily a bad thing. I thoroughly enjoyed this stark contrast between strength and flavor, and I believe a lot of other smokers will too.

Consistency: It was super complex, so throughout the smoke, I guess you can say it was consistently complex.

I honestly can’t say enough about this cigar. It’s truly a remarkable blend that Rocky, I’m sure, is proud of to celebrate his 20th year in business. The flavor was rich, complex, and ever changing, the strength was perfect, the burn was on point, the construction was remarkable, and it just looks incredible. This RP 20th Anniversary makes it on my top 20 list of cigars, and I’m certain it’s a cigar I will buy over and over again.

Negatives: Aroma was a bit “meh.” Then again, like I said, I was a bit under the weather when I smoked this cigar.

Rocky Patel has made a lot of cigars over the past two decades and a few of them have been just excellent. But when you set out to create a cigar for such a prolific milestone it better be pretty damned special; I mean it’s gotta score high in all the important categories – and after smoking it (like we did in our Rocky Patel Twentieth Anniversary cigar review video), you’ve got to want more.

Well, guess what, Mr. Patel has nailed this one square on the head (and the foot) with a medium bodied blend that is wickedly full flavored and impeccably rolled. It’s not often a cigar’s flavor profile jumps on your palate from the first few puffs, but the 20th delivers a complexity early on with a creamy smooth smacking of your happily awaiting taste buds. There’s an early tanginess that gives off notes of citrus and sweet wood but as it evolved I got a wonderful hit of tea that evolved even further with notes of dark chocolate and a hint of cherry.

Now if that sounds like a heck of a lot going on in a single cigar, well, yeah, it really is. I’m happy to report that Rocky has really done his anniversary a whole lot of justice by creating an ultra-premium stick that I for one will smoke a whole lot more of.

The 5 Most Common Flavors You’ll Find in Your Cigar