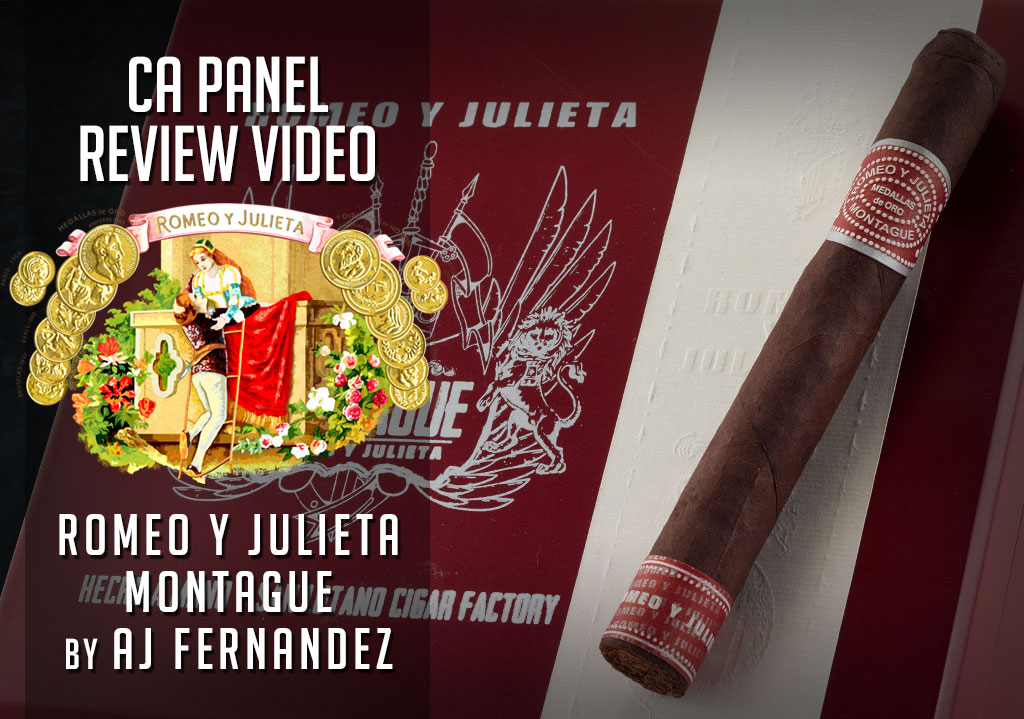 The Romeo y Julieta Montague by AJ Fernandez Back Story

If this Romeo cigar looks somewhat familiar that’s because there was another, earlier Montague release made in Honduras that boasts a Brazilian Arapiraca leaf. However, this blend made by AJ Fernandez in Estelí, Nicaragua is rolled in a dark, toothy Connecticut Broadleaf wrapper and worlds apart from its medium-bodied cousin. AJ’s Montague recipe has more high priming Nicaraguan tobacco, and the result is a smoke brimming with base notes of earth, wood, and an abundance of spice. For cigar smokers who’ve grown accustomed to the distinctive character of AJ Fernandez cigars, as well as those who enjoy full-flavored Nicaraguan cigars, the Romeo y Julieta Montague should prove to be a welcome addition to their humidor.

Summary: We start with a flashback to 2014, when we reviewed the inaugural edition of the House of Montague. Gary talked about the sweetness in our Smoke Break video; he also reviewed the Montague for our 2017 Romeo Cigar Guide, where he called it medium body with mostly molasses-like sweetness, leather and cedar flavors. It was a good “intro” Maduro back then, with barely-medium intensity that appealed to the mellow tastebud: dried fruit, nut, wood, leather.

After a reworking, AJ Fernandez has dropped the curtain on a RyJ Montague blend that is, far and away, a departure from the usual mild-mannered Romeo rep.

This Montague is an excellent specimen of construction – well packed, but still with a mostly clear draw. The blend is a medium-plus mix of Nicaraguan and Dominican long fillers under Connecticut Broadleaf, which is no stranger to a wonky burn – but it fared better than expected here, with a pretty nice line.

Lighting up, the RyJ Montague proceeds to unload a ton of pepper and spice, like it’s walking across your tongue in golf shoes; a thick and creamy smoke that leaves a lump in the back of your throat. Flavors move to the dry sweetness of cocoa powder and fresh baked bread, which make the back of the mouth water.

The wood and earth flavors ramp up as we approach the halfway mark, where tangy coffee and clove (or maybe licorice) jump in. Raisin (or at least that kind of sweet, dried fruit sensation) makes a brief appearance…so quick, it’s more like a drive-by.

There’s been enough spice in this cigar to leave a crispy feeling behind, kind of like the aftermath of your taste buds getting roughed up by spicy Chinese food: tingly, even a bit raw. But satisfying.

And that’s where we leave it. This Romeo y Julieta Montague by AJ Fernandez breaks the mold of the RyJ cigars you may be familiar with; and if you’ve thought of those as too delicate or subtle for your tastes, check out what AJ has done here – your palate deserves the workout that these bigger, richer flavors have to offer.

Summary: Both my baseline Montague and the cigar I smoked in the video started-off  very earthy with a profound charred wood flavor underscored by plenty of spice and a mere suggestion of sweetness on a very peppery finish. By the end of the first act, the smoke rounded-out losing some of its peppery sharpness shifting to more cedary character with a fair amount of spice in the lining.

Moving into the second act, the pepper in my baseline cigar subsided with more of the cedar coming through, as espresso-like coffee notes crept into the mix with some sweet tobacco notes, while more of a white pepper snappiness returned to the finish. However, though the flavors in both cigars were well-balanced, my video review Montague remained mostly peppery at this point with only a small measure of espresso in the mix.

During the final stage both Toros had significantly ramped-up in body while maintaining a mostly cedary-earthy-spicy character with some espresso notes continuing to float down the line. Moreover, some of the more peppery spice had faded, including on the finish. It wasn’t until the last inch that my baseline cigar revealed enough bitterness to let it go, but by that point I’d had the best of it. As for my video Montague, I just found it too overwhelming and let it go much earlier than the first Toro.

Based on the remarks during the video, I had the feeling that my Montague sample was a little “off” from the others on the panel. This occurrence, although rare, is just one of the things that goes with a handmade product like premium cigars. Nevertheless, I did enjoy the baseline Toro, even though I prefer sweeter fare. Overall, this cigar is better suited to the experienced cigar smoker, but for those who think Romeo y Julieta cigars don’t have enough ZING, the Romeo y Julieta Montague blended by AJ Fernandez will quash that notion upon lighting-up.

Construction and Overall Appearance: Espresso black Broadleaf wrapper, slightly toothy with a solid build and near invisible seams.
Draw: Perfect.
Pre-light flavor: Foot- Earthy, musty, slightly sweet earth, and spice. Cold draw: earth, salt, breads, cocoa and pepper.
Toasting & Light: Dark cocoa, earth, and cool woods with a slight tingle of spice. A slightly sweet yet harsh note comes forward with a wood-smoke note.
Base flavors: Cocoa, cherry, earth, oak, spices, white pepper, coffee.
Retrohale: At 2/3: Dark cherry, oak, loads of white pepper and a paprika spice with a slight acidy and tang on the finish but a pleasant aftertaste of cedar and black coffee. At 3/3: Less white pepper than before; cherry makes a resurgence- very creamy and smooth with a slight rush of nicotine, a coffee and cedar aftertaste.
Burn / Ash Quality: Solid white and built like a brick house.
Balance of flavors: Flavor-to-strength this cigar was well balanced and leaned toward sweet and spicy notes.
Consistency: Very consistent, each sample was well-made and brought a similar offering of flavor.

Summary: Gone are the days of a mild maduro from Montague. This AJ Fernandez blend is big, it’s beefy, and it’s got a full body that’s ready for your taste buds. The first observation of note is the exclusion of the white sleeve found on the original. Instead, I get a clear view of the slightly toothy, espresso-black Connecticut Broadleaf wrapper and its faultless seams.

Right off the bat this cigar is spilling over with sweet and spicy notes of cocoa, espresso, earth, woods, salt, and a slight spicy-tang. Smoke pours out in big rips while the construction is flawless, an immaculate ash complements a razor-sharp burn line and perfect draw.

Midway through, the sweetness is gradually subdued, though it takes on a slight cherry quality that mixes well with the cocoa. The wood shifts to an oak-barrel note and chugs along with a distinct earthiness while the citrus tang and spice remain on the finish.

A retrohale brought a rush of nicotine with heavy dark cherry and oak notes backed by loads of white pepper and a paprika spice. There’s also a slight acidy tang on the finish but a pleasant aftertaste of cedar and black coffee. By the end the sweetness shifted again toward a roasted marshmallow flavor with more oak, tang and spice.

Final thoughts: Definitely medium-plus to full-bodied and deeply complex. Pair with bourbon and take your time with this slow-smoker.

Summary: I really never start off a review talking about the construction of a cigar, but this revamp of the Montague by AJ Fernandez is built with the precision of a world class architect (possibly even Art Vandelay, who also happened to be a renowned importer/exporter). The draw is simply perfect as an entire room full of smoke fills your mouth, and then you billow it out like an old locomotive. The ash is basically white and burns as solid as a rock.

There are cigars that are straight-forward in flavor, and there are complex smokes, but this one falls into the category of uber-complex. There is a whole hell of a lot going on with this one; a bunch of different flavors that I identified and they changed like the wind. Right off the bat it was spicy and a little bit peppery and then a third of the way in the flavors started to ramp up as I got charred wood, then dark roasted coffee, dark cherry, and a taste I’ve never experienced before: a smack on the back of the palate of bread pudding. I swear to God, I’m not trying to be like one of them high-brow boners who taste soggy waffles and fence post in their pretentious reviews, I really did get what was reminiscent of bread pudding – I swear.

I think the Montague started out medium in body and then took a ride straight into Fullville. It’s strong, but not killer by any means, and definitely smooth. I think with a few months on it, it may even smooth out a bit further. I don’t recommend it for beginners as only a more seasoned smoker will be able to identify the ever-changing complexity this AJ has to offer. Pair it with a good whiskey, a nice tawny port, or even a bold cup of coffee and you’ll be telling your friends that life is good. If you love a lot of flavor in your sticks, the House of Montague by AJ Fernandez is definitely a cigar you need to try.

Reading Time: 4 minutes It’s a must-smoke for #nowsmoking: find out what Gary Korb discovered about this Steve Saka smoke in this Sobremesa Brulée cigar review. . .