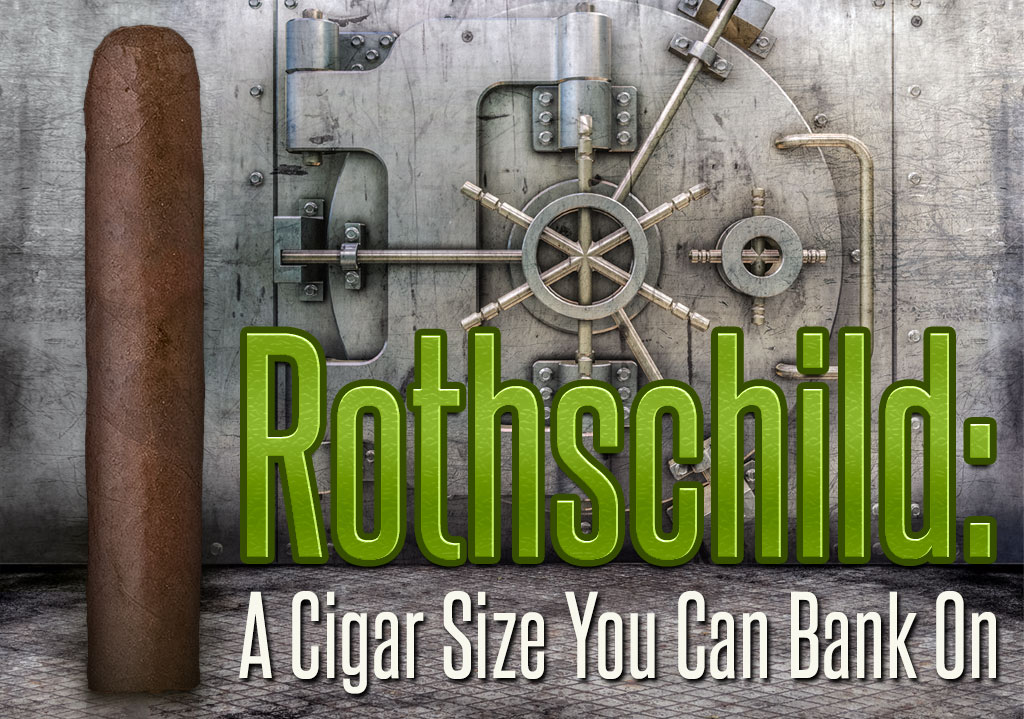 Rothschild: A Cigar Size You Can Bank On

Rothschild cigars are classically defined as a parejo (straight-sided cigar) measuring approximately 4 1/2″ in length by a 52 ring gauge – roughly the same thickness as a Robusto, just a little bit shorter. The shape is named for the Rothschild family, a European banking dynasty which, for all its wealth and titles, cannot seem to buy a proper spelling of its name. Common misspellings include Rothchild, Rothchilde, Rothschilde, and Rothshield, among others. Even the pronunciation is frequently botched to “ROTH-child,” whereas a properly anglicized pronunciation would be “ROTH-shild.”

Interestingly, the family recognized early on the pitfalls of storing their wealth in liquid holdings like currency or gold. As their wealth grew, they turned to more sophisticated financial instruments such as stocks, bonds, and debts, which rendered their holdings all but impervious to theft or expropriation. Another key to keeping their wealth in the family was through carefully-arranged marriages. These marriages often consisted of first- or second-cousins, similar to European monarchies of the era, but might also include marriages to members of royalty or other banking families. Additionally, many family members were granted hereditary nobility by their respective monarchs, taking an honorary “de” or “von” prefix to their last name.

A New Shape Is Born

It was from Nathan Mayer’s London branch of the Rothschild family that the cigar was born. As was common among the European upper crust in the 1800s, Nathan’s grandson Leopold took quite a liking to cigars.

According to Richard Carleton Hacker’s “The Ultimate Cigar Book:”

During the 1880’s, London financier, Leopold de Rothschild instructed the famous Hoyo de Monterrey factory in Havana to make a short cigar with a large ring size so that he could enjoy the richest flavor possible without having to take the time to smoke a full-length cigar.

With American tastes leaning toward ever-longer and thicker cigars, the Rothschild shape has fallen somewhat out of favor in the US in recent years. Despite that, many Cuban brands are still offered in the shape, as well as non-Cuban manufacturers like Arturo Fuente, Gran Habano, and Joya de Nicaragua. Altadis and General Cigar, the two largest manufacturers of non-Cuban cigars, also offer the shape in many of their most popular brands including H. Upmann, Montecristo, Punch, Partagas, Hoyo de Monterrey, and Macanudo lines.

Moreover, the entire range of Nub cigars by Oliva can be considered similar to the Rothschild in that they are short, fat cigars designed to pack the experience of a full-sized cigar into a smaller form factor.